The most socially distant NFL draft in the history of the event kicked off Thursday night by heading right into the living rooms of its draftees. And two of the first 10 selections had ties to Nebraska.

The first overall pick, LSU quarterback Joe Burrow, was selected by the Cincinnati Bengals, whose coach, Zac Taylor, is a former Husker quarterback. Burrow had three family members play at NU, but he spent the final two years of his career in the Bayou, where he tossed 60 touchdowns last season, breezing to the Heisman Trophy and winning the national title.

Burrow wasn’t on many NFL draft analysts’ radars before the season. He shot to the top of it, however, with one of the best college football seasons in memory.

“To jump up to No. 1 overall is crazy to me, but it’s a dream come true,” said Burrow on ESPN while wearing a 740 area code shirt that represented his hometown of Athens, Ohio, where his dad, Jimmy, was a longtime defensive coordinator for Ohio.

Jimmy was also a former Husker coach and player, as were Joe’s older brothers, Jamie and Dan. ESPN showed a graphic of the three elder Burrows in Husker uniforms while mentioning that Nebraska did not offer him a scholarship out of high school in the 2015 recruiting class — when Joe picked Ohio State — and that NU didn’t heavily pursue Burrow in 2018 when he transferred out of OSU and picked LSU.

“When the pressure was on, he was always at his best,” Kiper said.

Isaiah Simmons, a Clemson star with Omaha roots, is ready for his NFL draft party

Clemson's Isaiah Simmons will likely be one of the first 10 picks in the NFL draft, but the Butkus Award winner also has strong Omaha ties.

The eighth overall pick, Clemson linebacker Isaiah Simmons, was born in Omaha and lived there until he was 5 years old before moving to Kansas when his dad, Victor, helped open the Nebraska Furniture Mart north of Kansas City. Victor was a state champion sprinter at Omaha Bryan High School in 1981, and Isaiah nearly played at Nebraska before Clemson came through with a late scholarship offer.

Simmons is considered one of the most versatile players in the class, able to play multiple positions.

“You can blitz him from off the edge, you can even play him in the deep middle third,” NFL Network draft analyst Daniel Jeremiah said of Simmons. “This guy can do so many different things for a creative (defensive) coordinator. He’s an outstanding prospect.”

For all the uniqueness of this draft, including the angst over a potential communications fiasco, things looked and sounded pretty normal Thursday night.

Quarterbacks were in demand. Ohio State and the SEC dominated. The Patriots traded out of the first round.

And Commissioner Roger Goodell even got booed, if only digitally.

“I do believe this draft is going to be the most memorable we have ever had,” said Goodell, noting that it is accompanied by a “Draft-A-Thon” to benefit six organizations on the front lines battling the coronavirus pandemic, which is what forced the NFL to cancel all in-person draft events.

The first round wasn’t all that remarkable for the picks. Beginning with Burrow, three quarterbacks went in the top six. Hardly unusual.

For months, Burrow was linked with the Bengals. Cincinnati began the draft by sending his name to Goodell in the basement of his home.

Shatel: What's next for Joe Burrow? Spending his NFL draft moment with family

Joe Burrow has checked all the available boxes, including one more on Thursday night, when he's expected to become the No. 1 pick in the 2020 NFL draft.

This digital/remote/virtual draft — take your choice — was up and running. With no apparent glitches.

Of course, there were no fireworks on the Las Vegas Strip. No bear hug between Goodell and Burrow; the commissioner said he would miss those, even if his body wouldn’t. This most basic selection show had team personnel making picks from their homes and players sitting on their own couches while learning their future employers.

The NFL canceled all draft activities in Las Vegas when the national shutdown of large gatherings began. The league had gone full-bore into free agency last month and, now, seven rounds of the draft through Saturday.

“I just believe that our job is to continue on and operate within whatever guidelines are necessary to keep our personnel safe, whether it’s players or coaches or their executives or league personnel,” Goodell said. “We need to make sure that we’re doing things safely and put public safety No. 1, but we also need to carry on. We need to move toward the future. We need to make sure that we’re prepared when we come out of this to be in a position to start our season on time and play our season. That’s our role.”

Normalcy, at least among the picks, was the order of the evening, though.

First came Burrow, who joins a team that went 2-14 last season and desperately needs a jolt of energy.

Bengals coach Zac Taylor was confident Burrow could turn the franchise around.

“We will never pick at No. 1 again,” Taylor said. “We don’t want to pick in the top 10 again. We’re looking at this as the only time you’re going to get this caliber player to add him to the program, so obviously this is a big deal.”

The second overall selection, Ohio State All-America edge rusher Chase Young, also was predictable. Washington fielded several offers for that spot, but many scouts and personnel executives felt Young was the best player in this crop.

At 6-foot-5, 264 pounds, Young led the nation with 16½ sacks and forced fumbles with six last season. The All-American won the prestigious Bednarik and Nagurski awards in 2019, leading the Buckeyes to the Big Ten title.

If not for the NFL’s obsession with finding the latest, greatest quarterback prospect, Young might have been the top overall selection. That QB infatuation led Miami to Tua Tagovailoa and the Los Angeles Chargers to Justin Herbert — no surprises there. But Green Bay took a chance at No. 26 by taking Utah State QB Jordan Love.

Alabama’s Tagovailoa went fifth, followed in the next spot by Oregon’s Herbert. They were preceded by Ohio State’s Jeff Okudah, the highest-rated cornerback, to Detroit, and Georgia tackle Andrew Thomas to the Giants.

The Alabama quarterback went to a team that was accused going into last season of “Tanking for Tua.” Tagovailoa comes off major hip surgery, which made his landing spot one of the first round’s biggest uncertainties.

“For me and my family, whoever decided to take a chance on us, that’s where I belonged,” Tagovailoa said. “My biggest thing is I’m trying to prove this was the right decision.”

One change he’ll need to make in Miami: No. 13 is not available. The Dolphins retired it for Hall of Famer Dan Marino.

Blessed with a quick release, excellent mid-range accuracy and nimble feet, Tagovailoa threw 76 touchdown passes in 24 starts the past two seasons. He helped the Crimson Tide to the 2017 national title.

Herbert had a strong postseason, including a terrific Senior Bowl week that raised his stock. At 6-foot-6, 236 pounds, he has the size the pros like, and he’s a good athlete. But he also is not as accurate passing as he’ll need to be.

Los Angeles had a burning hole at quarterback after letting go of longtime starter Philip Rivers. Plus, the Chargers plan to move into a new stadium and could use someone to help sell tickets.

It took until the 13th spot before a trade was made: Tompa, oops, Tampa Bay moving up one spot to get tackle Tristan Wirfs of Iowa to help protect new/old QB Tom Brady. The Buccaneers got that pick from NFC champion San Francisco.

Wide receiver is the deepest position in this draft, but it took until the 12th selection for one to go. Alabama’s Henry Ruggs III, perhaps the fastest man in this group (4.27 in the 40), was the first-ever draftee by the Las Vegas Raiders. Coach Jon Gruden loves speed, and he got a burner who scored 24 touchdowns among 98 career receptions.

New England, which will go into a season without Brady for the first time since 1999, sent its 23rd overall spot to the Chargers, adding a second- and third-rounder. The Chargers were eager to bolster their defense with Oklahoma linebacker Kenneth Murray.

The Packers, despite needs at receiver, offensive line and linebacker, traded up from No. 30 to 26th and selected for the future with Love. Aaron Rodgers, of course, sat for a few years in Green Bay behind Brett Favre. Love might do the same behind A-Rod. 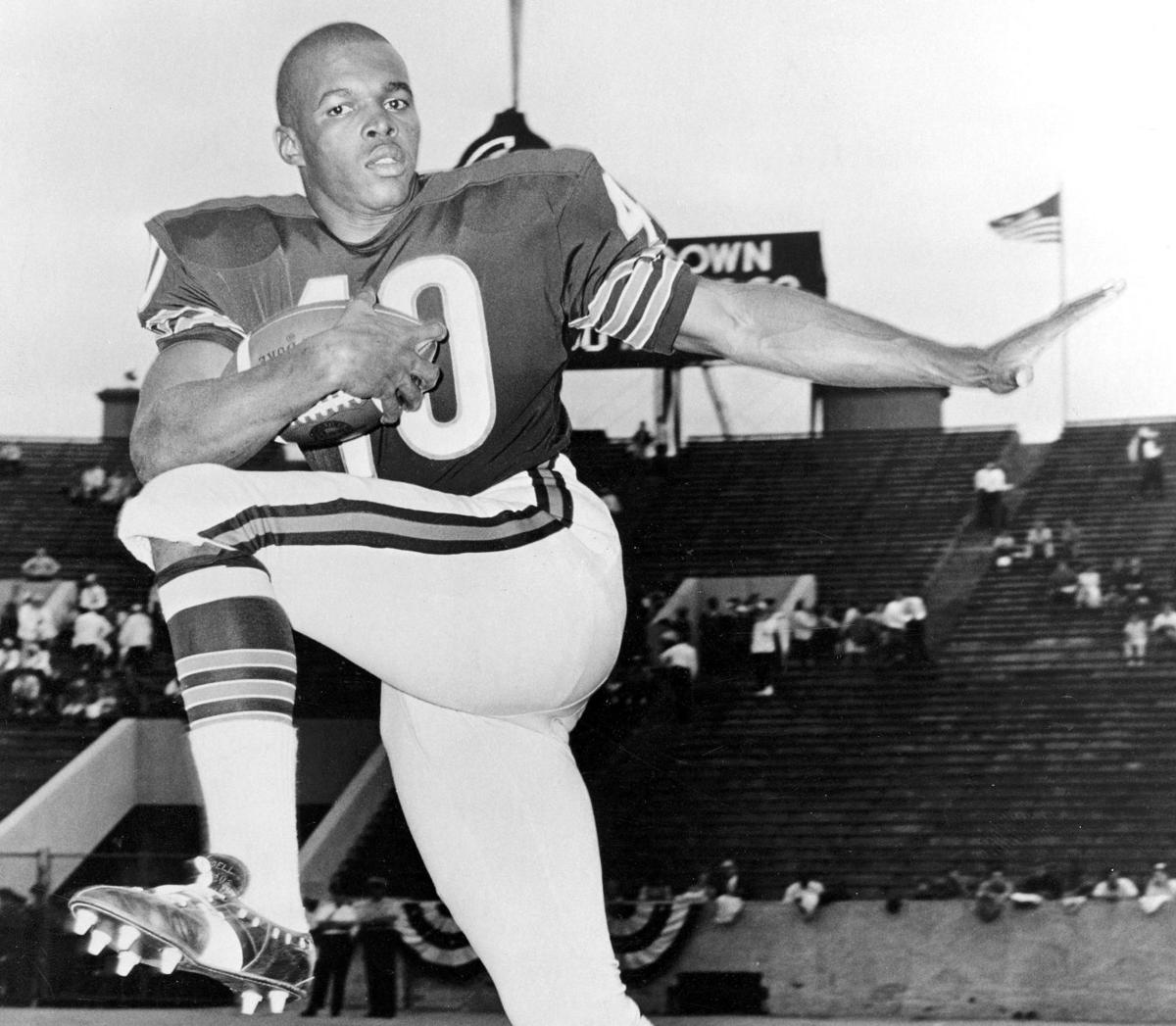 Photos: Nebraskans selected in first round of NFL draft

This is a collection of football players who graduated from high schools in Nebraska and then became first-round NFL draft picks after college. Did we miss anyone? Let us know by sending an email to sports@owh.com

Husker twins Carlos and Khalil Davis have been together since birth. The NFL draft may change that

Separated by five minutes at birth — Carlos is older — they’ve been dominating together, on the same teams, since forever.

Good luck to Burrow and Simmons. Neither would have been a first rounder had they gone to NU. Cautionary tale for sure.