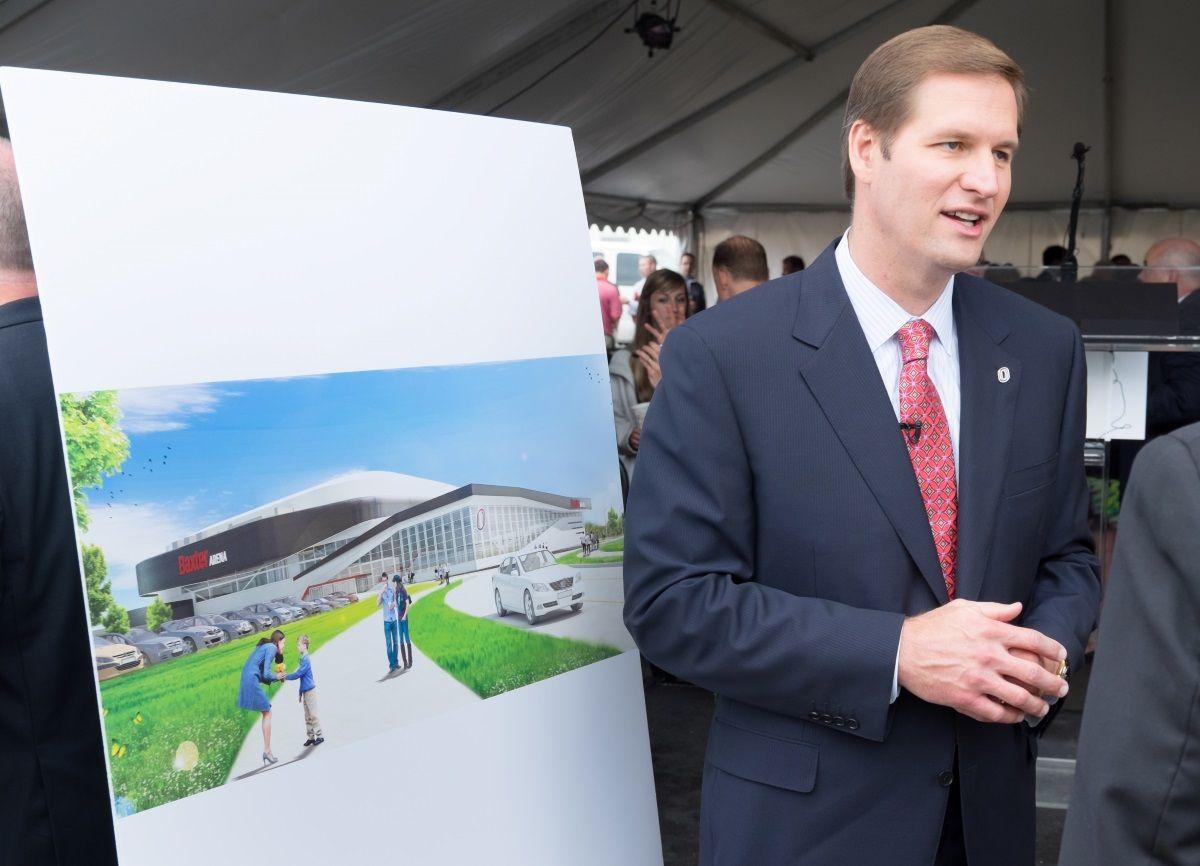 Standing next to a rendering of the new Baxter Arena, UNO Athletic Director Trev Alberts talks with media after a naming announcement ceremony for the UNO arena. 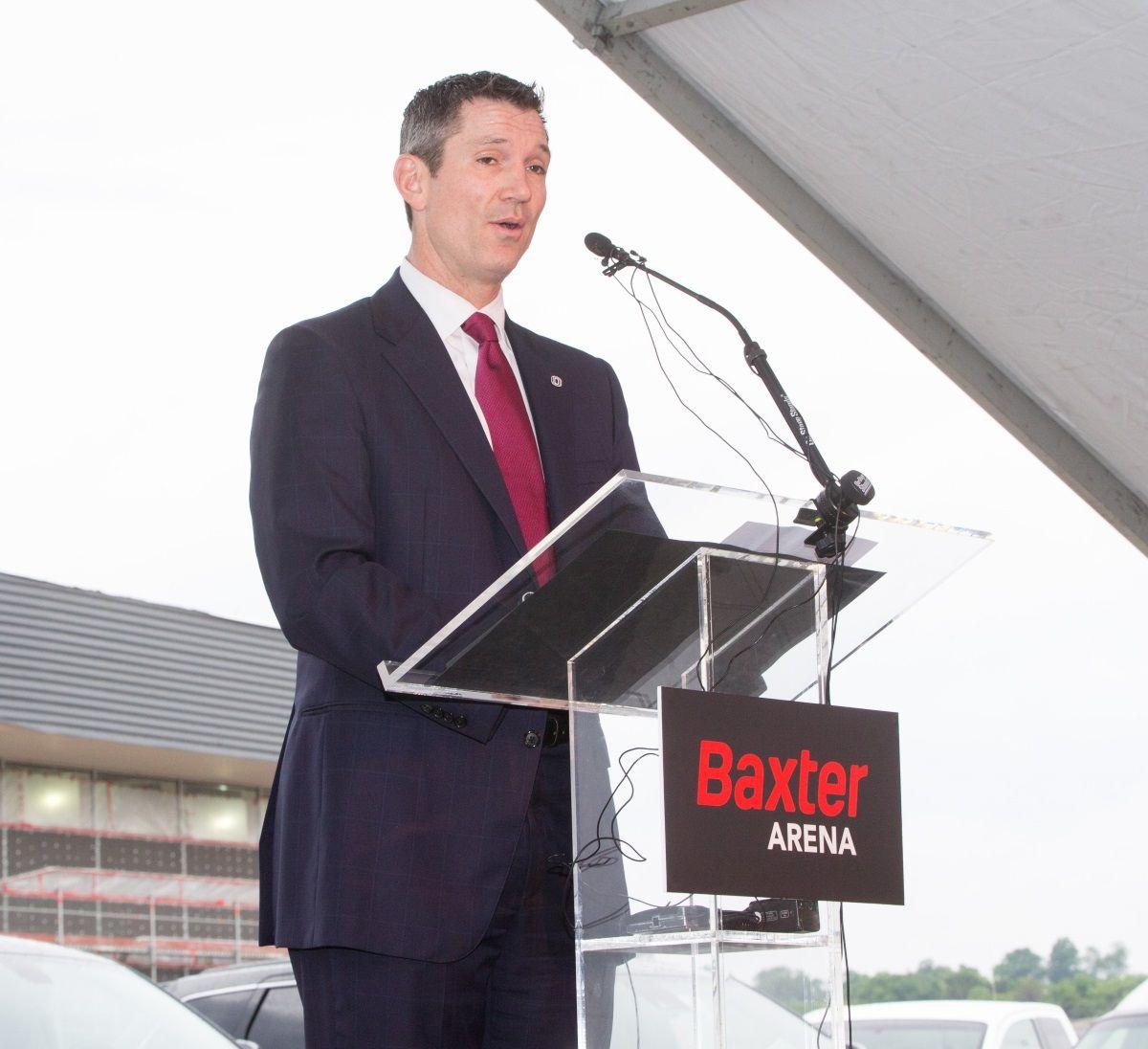 Standing next to a rendering of the new Baxter Arena, UNO Athletic Director Trev Alberts talks with media after a naming announcement ceremony for the UNO arena.

Like a lot of dreams that cost money, this one started on a golf course.

“The Marian golf tournament,” Anderson said with a nod.

This was 2010. Alberts had taken the UNO athletic director’s job the year before with no experience but plenty of vision. He knew earth would have to be moved, literally. He was already thinking about a UNO arena.

“Mickey and I are in a golf cart,” Alberts said on Wednesday. “I’m just getting to know Mickey. But I said, ‘You know what? It would be really great to have your name on the arena.’ ”

They had a way of making a dream come true. Behind them, reality stood in the form of a dazzling new arena already up and being finished for a fall opening.

Now, this dream has a name. Baxter Arena, as in Baxter Auto, run by Mickey and his sister Angie, who took over for their late father, Tal Anderson.

The arena cost $82 million, and Baxter is putting in $4 million over 10 years to have its name on what looks like a community gem.

This happened Wednesday, in a scene that told a lot about where UNO is today and where it’s headed.

The naming rights announcement was made in a parking lot next to the arena, in a tent filled with people wearing suits, Mayor Jean Stothert, city council members and university regents. There were speeches and it came off as a school and community pep rally.

This is the kind of thing we see all over Omaha when our city’s corporate arm flexes its considerable muscle.

The news on this day is that it was happening with UNO sports.

UNO has had its share of loyal and wealthy boosters. The names Sapp and Sokol come immediately to mind.

But an event in a tent with an $82 million arena, corporate naming rights and city officials lauding a new city landmark seemed like an out-of-body experience for UNO.

UNO is growing up before our eyes, and all you need to do is drive to Center and 67th to see it and believe it.

The official opening is a Maverick hockey game on Oct. 23. But in many ways, this event felt like the unofficial opening. Like, wow, this is really going to happen.

It’s quite a story, a success story, and a believe-it-or-not tale for those who grew up with the mom and pop image of “Dodge Street High.”

If you thought it was crazy talk that UNO would ever be all Division I sports, then someone who had the idea of raising $39 million in private bucks for an arena — plus $4 million in naming rights — was locked up in a straitjacket in the basement of the asylum.

I never imagined it. Heck, I was shocked when Creighton filled a 17,000-seat arena on a nightly basis. UNO tapping the city for an arena? Forget it.

Especially after what happened to football.

Alberts and Chancellor John Christensen made that move in 2011, in the name of stability and an athletic future, remaking the school’s image — and getting an arena built.

UNO football was the school’s identity in this town for so long. There weren’t always big crowds, but there was a loyalty, a heritage, feelings and emotions.

Could Alberts tap into UNO and city pockets when he had just taken that away?

“I didn’t know,” Alberts said. “But I would tell you that, in my heart, if we couldn’t get an arena executed we weren’t going to survive anyway.”

The Anderson family is a perfect example of why it happened.

Tal Anderson went to UNO (then Omaha U.) and played baseball and basketball. He was a proud alum and booster who loved being a Maverick.

Tal called Alberts two days after he accepted the A.D. job and said, “I want you to know I have cancer, but I will do anything you need to help.”

Anything to help UNO. That was the legacy and spirit that Tal’s kids, Mickey and Angie, kept alive. Mickey used to attend UNO football camps and was a regular at Caniglia Field watching the Mavs with his dad.

When football was taken away, Mickey was crushed.

“It was hard on all of us,” he said. “It was something that was very important to me. Through it all, I respected the process and knew they made some very difficult decisions to ensure a future for UNO athletics.

“To me, the overall future of the department and student-athletes trumps any parochial situation. UNO was aiming for the best.”

When he and Alberts were on the trail to recruit money, Christensen said he heard people say time and again, “Are you sure it’s not just a dream?”

“I said ‘no, this is a reality,’” Christensen said.

What Christensen found was that dropping UNO football had an effect that maybe they weren’t expecting: It told the corporate community that UNO was finally serious about getting its business in order.

“It doesn’t surprise me we raised the money,” Christensen said. “Since those difficult decisions were made and needed to be made, I’ve had a number of community people who were upset come back and say, ‘I’m still not happy, but now I have a better understanding of why you did this. We get it.’ ”

The arena isn’t just about hockey or hoops. It’s a symbol of UNO’s place in Omaha, its staying power, its impact on the community.

And maybe a statement that UNO had more of that going on than some of us ever knew.

Baxter Arena: Auto dealership leader says dad, who had deep ties to UNO, would be proud

Omaha's Baxter Auto — one of the metro area's largest dealers — is set to pay millions for the right to have its name on the 7,500-seat arena that’s set to open in the fall.

The automotive dealership’s arena-naming announcement is just the first step in Baxter’s efforts to more clearly connect its multiple brands across the area, said an executive at Baxter-owned Performance Auto Group.

UNO’s full schedule for its first season of NCAA eligibility isn’t finalized, but coach Derrin Hansen is hoping a tough nonconference slate will have his team prepared for Summit League play.

They’re all gone. Fans still hoping to see UNO on home ice during its first season at the on-campus Baxter Arena have to wait until single-game tickets go on sale in August after season tickets sold out.

UNO sports in black, but red remains on the books

Despite some budget growing pains, full Division I status helps the University of Nebraska at Omaha carve out a new identity.

Shatel: For UNO and A.D. Trev Alberts, work has just begun in Division I

The hallways looked the same. The offices, no bigger. The Maverick Mojo, still Mojo-ing to the familiar beat. What’s a Division I athletic department supposed to feel like? UNO is official now, and it’s hard to discern a difference.