UNO's Brian Cooper gets tripped up by Providence's Nick Saracino, on ice,  during first period of the Frozen Four semifinal at TD Garden in Boston.

Providence, left, and UNO stand at attention during the National Anthem before the start of the Frozen Four at TD Garden in Boston. 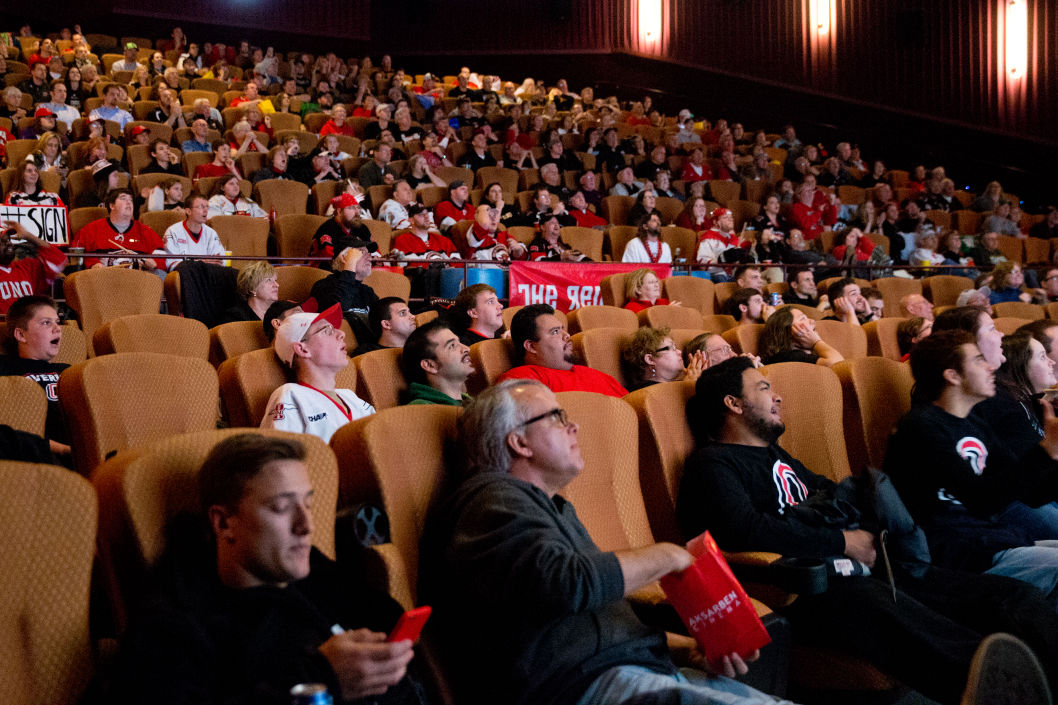 UNO's Brian Cooper gets tripped up by Providence's Nick Saracino, on ice,  during first period of the Frozen Four semifinal at TD Garden in Boston.

Providence, left, and UNO stand at attention during the National Anthem before the start of the Frozen Four at TD Garden in Boston.

BOSTON — From the opening drop of the puck, Providence peppered Ryan Massa with shots.

The No. 15 Friars (25-13-2), the last at-large team selected for the NCAA tournament, kept the pressure on the UNO goaltender early on at TD Garden. And, for a while, the senior was up to the challenge.

Massa turned aside the first 28 Providence chances, making save after save to keep the first of two Frozen Four semifinals scoreless through the first 30 minutes while his team generated little on offense.

Then a fortunate rebound for Providence went between the legs of Maverick defender James Polk in front of the net. Friars captain Noel Acciari flipped it in with a backhand. And his team led from then on.

Providence ended No. 9 UNO’s tourney run with a 4-1 victory Thursday in the national semifinals. The Friars, who outshot the Mavs 48-26, will face No. 2 Boston University Saturday for the NCAA title.

The Acciari goal put UNO (20-13-6) behind for the first time in the tournament. And the Mavs found it tough to get scoring chances against Providence goaltender Jon Gillies, who finished with 25 saves.

Mark Jankowski, Calgary’s first-round pick of the 2012 NHL draft, extended the Friars’ lead to 2-0 by taking a crisp pass from Nick Saracino and maneuvering the puck past Massa with 5:02 left in the period.

The Mavs managed only 16 shots on goal through two periods, but they never felt they were out of the game.

“We talked about getting the next goal when it was 2-0 between the second and third period, no matter what the shots were, because we’re a team that has come back during the course of the year,” Mavs coach Dean Blais said. “Quite a few times. And the third period is usually our best period.”

Thursday was no exception. Jake Guentzel got the Mavs back in the game, albeit briefly, by scoring off a Tyler Vesel assist with 9:14 remaining after Gillies made an ill-advised pass along the boards.

“Vesel made a good pickup along the wall and found me in the slot, then I somehow beat the goalie,” Guentzel said. “I was thinking the momentum was turning our way. That’s been our team all year. If we get one, we’re going to keep coming and try to get two.”

UNO never got the chance.

Trevor Mingoia answered 24 seconds later, one-timing a Jankowski pass from behind the net past Massa to push the Providence lead back to two. Saracino added an empty-netter in the final minute to cap it.

Massa finished his stellar final collegiate year with 44 saves. It was the fourth time this season he made 40 or more saves in a game. UNO won the first three times it happened. It didn’t have enough on Thursday.

“I figured that, with such a young group this is all new territory for everyone, the nerves were going to be there,” Massa said. “I tried to steady the ship and keep the guys in it for as long as I could. They made a couple of good plays and found a way to get a couple of goals in the second period.”

Providence earned another shot at Hockey East champion Boston U. in the title game while ending UNO’s best postseason in its 18-year history one win short of Saturday’s championship.

The Mavs had never won an NCAA tournament game prior this season. Picked to finish sixth in their conference, they played their way into a top-10 national ranking, then, later, a first Frozen Four berth.

Losing in the semifinals wasn’t the ending UNO hoped for. But Blais said it didn’t spoil a great season.

“I’m proud of the team, obviously, and what we accomplished this year in our first trip to the Frozen Four,” he said. “(It) didn’t turn out like we hoped, but certainly proud of the guys and the way they never gave up. I thought when it went 2-1 we had a chance. They came down and scored the next shot.”

Ryan Massa’s goal for Thursday night was simple — give UNO everything he had. Mission accomplished. His 44-save night in UNO’s 4-1 loss to Providence was what the Mavericks have come to expect from their senior goaltender, who led the nation in save percentage this year.

The Mavs had fewer fans at TD Garden than any of the other three participants — Providence, Boston University and North Dakota — for the school’s first appearance in the Frozen Four. But those who made the long, and not exactly inexpensive, trip from Omaha still heartily cheered the few things that went UNO’s way in a 4-1 loss to Providence.

As a rule, movie theaters are pretty quiet places. That certainly wasn’t the case Thursday at Aksarben Cinema, where UNO hockey fans jammed three of the auditoriums. They watched on the big screens as the Mavericks played Providence in a semifinal of the NCAA’s Frozen Four tournament.

Providence generates plenty of opportunities in reaching the title game

Pundits, fans and other outsiders have been trying all season to assign this Providence hockey team with an identity. As the Friars went from being ranked No. 3 in the preseason, to struggling a bit in the middle of the season, to being one win away from the school’s first national championship, there’s one label that never sat well with coach Nate Leaman.

Mike Kemp stood outside UNO’s locker room with a smile and a heavy heart. The hockey program he began lost Thursday in its first Frozen Four appearance. But as much as the former Maverick coach wanted more, he wasn’t disappointed.

UNO fans gathered together before UNO's Frozen Four matcup with Providence on Thursday for a pregame pep rally.

With a Frozen Four team loaded with underclassmen, UNO hockey has a bright future

It was supposed to lay the foundation. Instead, it raised the ceiling. This UNO hockey team, the one picked to finish sixth in the National Collegiate Hockey Conference and that lost its exhibition game 4-0 to a Canadian college, exceeded all expectations with a Frozen Four run.