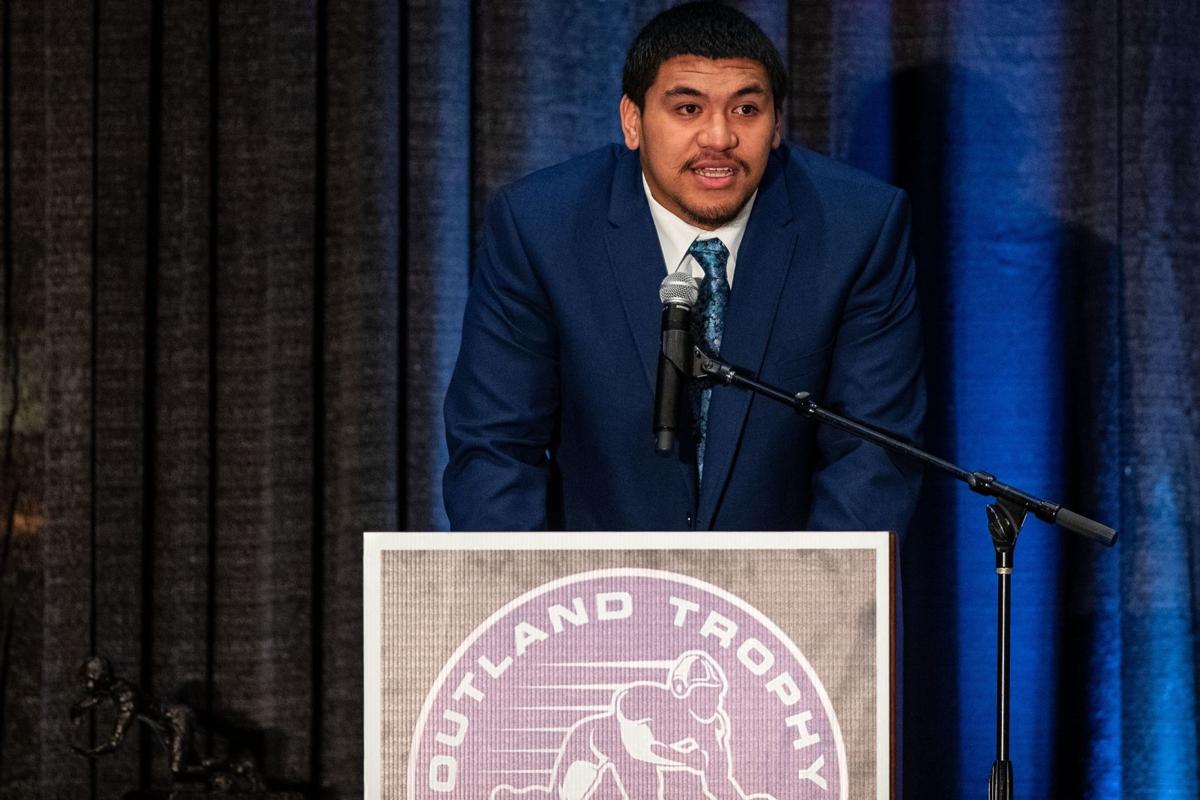 According to Pro Football Focus, Penei Sewell was the nation’s highest-graded offensive lineman and the top run-blocking lineman in the nation. 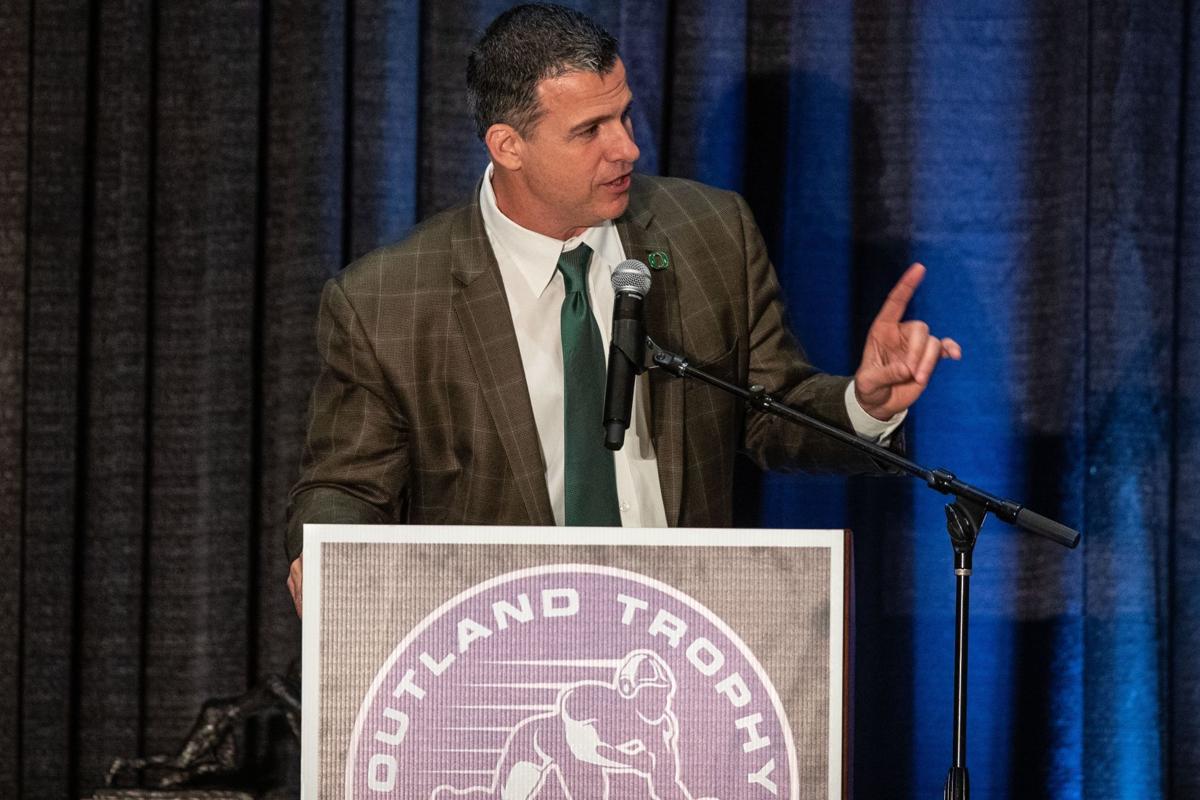 Coach Mario Cristobal said Sewell and the UO line was “completely responsible” for the more physical style of play from the Ducks. Sewell appreciated Crisotbal’s confidence that Sewell could win the award as a true sophomore. 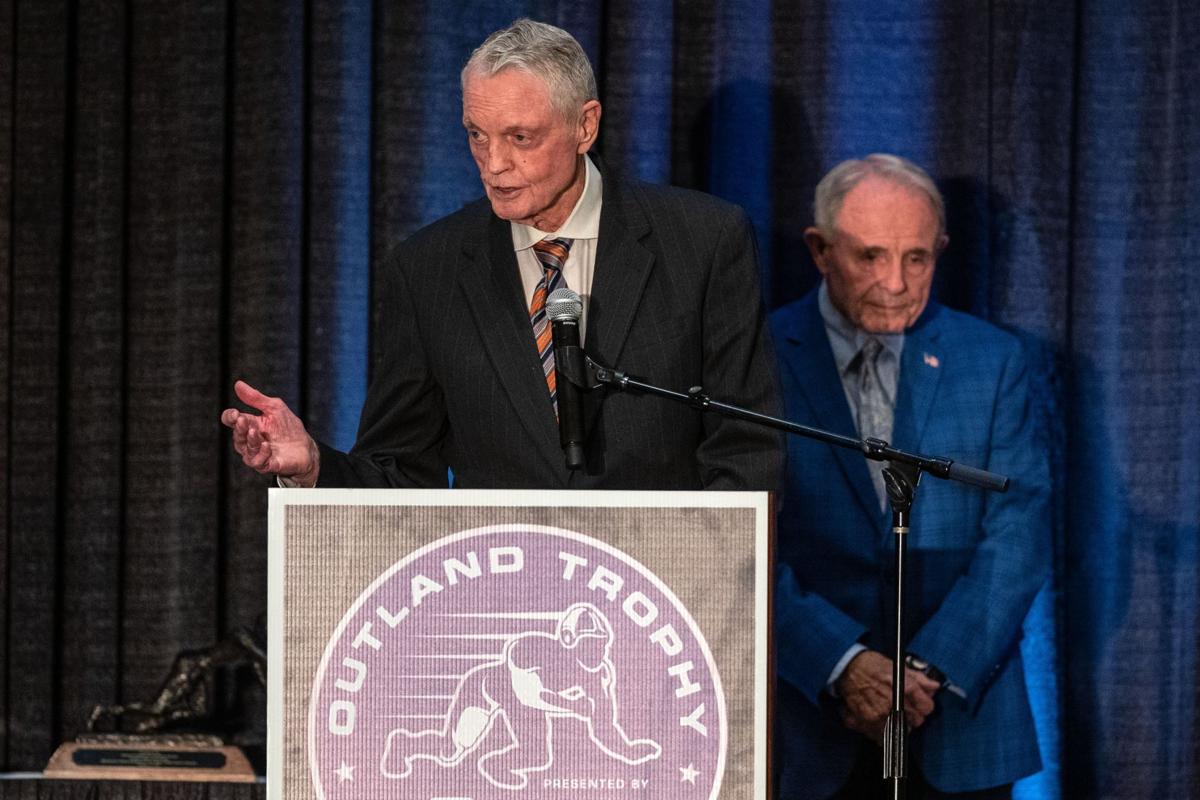 Tom Osborne said he admired former coach Fisher DeBerry’s system so much that he and Frank Solich visited Air Force one offseason to figure out how the Falcons did it.

The biggest man in the room took a deep breath and leaned forward on the lectern with both arms, 325 pounds bearing down on the wood.

Penei Sewell, the nation’s top interior lineman for 2019, collected himself several times as he formally accepted the Outland Trophy. He smiled. He wiped away tears. More deep breaths. A few laughs. The gravity of the honor hit Sewell like he hits opposing defensive linemen.

“To this day it’s still surreal to me that I’m standing in front of you as the Outland Trophy winner,” the Oregon offensive lineman said Wednesday night at the event’s annual banquet, held at Hilton Omaha. “It’s a dream come true.”

Sewell, a 6-foot-6, 325-pound sophomore, is the first Polynesian player to win the Outland and was part of an Oregon offensive line that plowed its way to a Rose Bowl title. The Ducks led the Pac-12 in yards per carry and had a 1,000-yard rusher (CJ Verdell) for the third straight season and the ninth out of 10 seasons. According to Pro Football Focus, Sewell was the nation’s highest-graded offensive lineman and the top run-blocking lineman. Penei’s younger brother, Noah, is a five-star linebacker in Oregon’s 2020 recruiting class.

Oregon coach Mario Cristobal said he knew how good Sewell would be after watching a snippet of his high school film on an assistant’s cellphone.

“What NFL team does he play for?” Cristobal recalled saying. Oregon tried so hard to land Sewell in the recruiting process that the school dressed a graduate assistant up as the Duck mascot.

Cristobal said Sewell and the UO line were “completely responsible” for the Ducks’ more physical style of play. Sewell appreciated Cristobal’s confidence that he could win the award as a true sophomore.

“It was right after fall camp, before the season started, he looked me right in the eye, and said, ‘Go win it, go get it this year,’ ” Sewell said. “Well, Coach, I’m here.”

Sewell thanked his parents, Gabriel and Arlene, who moved the family from American Samoa to Utah when Penei was in middle school.

“You guys made steps and had choices and made sacrifices for us,” Penei said of himself and four siblings. “I thank you guys for making the trip here, because I remember when I didn’t want to come to the States. All I knew and all I wanted was in American Samoa. But I thank you guys.”

Former Air Force coach Fisher DeBerry received the sixth Tom Osborne Legacy Award, as well. DeBerry was a 23-year stalwart at Air Force, where the peppy southerner installed a triple-option offense that the Falcons still use, to some degree.

“It’s been the hallmark of the service academies,” Osborne said of the offense.

Air Force finished inside the Top 25 three times. DeBerry has long been affiliated with the American Football Coaches Association and is a close friend of Osborne’s.

Osborne said he admired DeBerry’s system so much that he and Frank Solich visited Air Force one offseason to figure out how the Falcons did it. Osborne said he was impressed by the efficiency of DeBerry’s coaching style and the option attack. Osborne joked that DeBerry didn’t need a microphone, either, “because he has the loudest voice you’ve ever heard.”

“He really cared about his players and tried to make sure his players were better people,” Osborne said.

DeBerry said when he arrived at Air Force in 1984, he called three coaches: Florida State’s Bobby Bowden, Baylor’s Grant Teaff and Osborne. All three were welcoming, Osborne in particular, and NU and Air Force’s freshmen teams used to tangle in the 1980s.

“That was big for a little, old country boy from rural South Carolina,” DeBerry said. One of DeBerry’s former players, Chad Hennings, won the Outland Trophy in 1987.

Penei Sewell was in Omaha on Tuesday, touring Boys Town and standing next to his award honoring the top interior lineman in the country. He will formally accept it Wednesday evening during a dinner and ceremony at the Hilton Omaha Downtown.