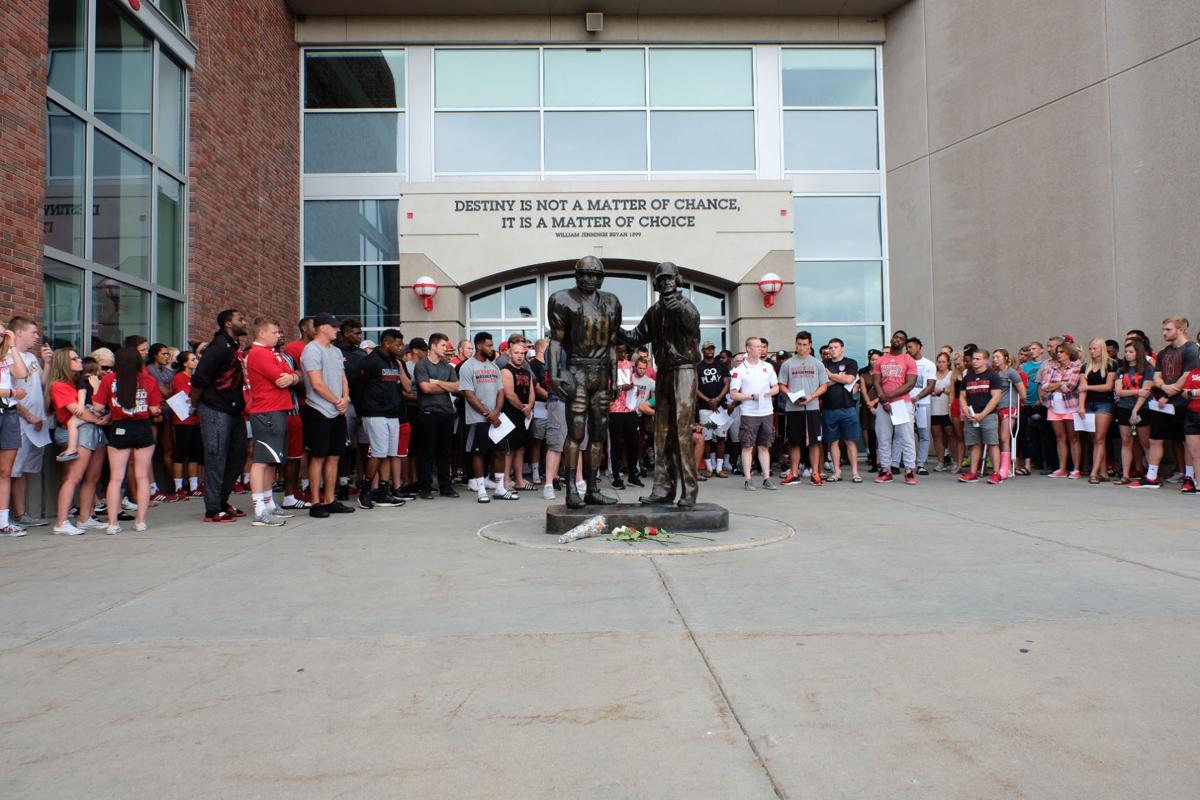 NU players held a vigil Sunday afternoon at Memorial Stadium, near the statue that features Tom Osborne and former NU quarterback Brook Berringer, who died in a plane crash in 1996 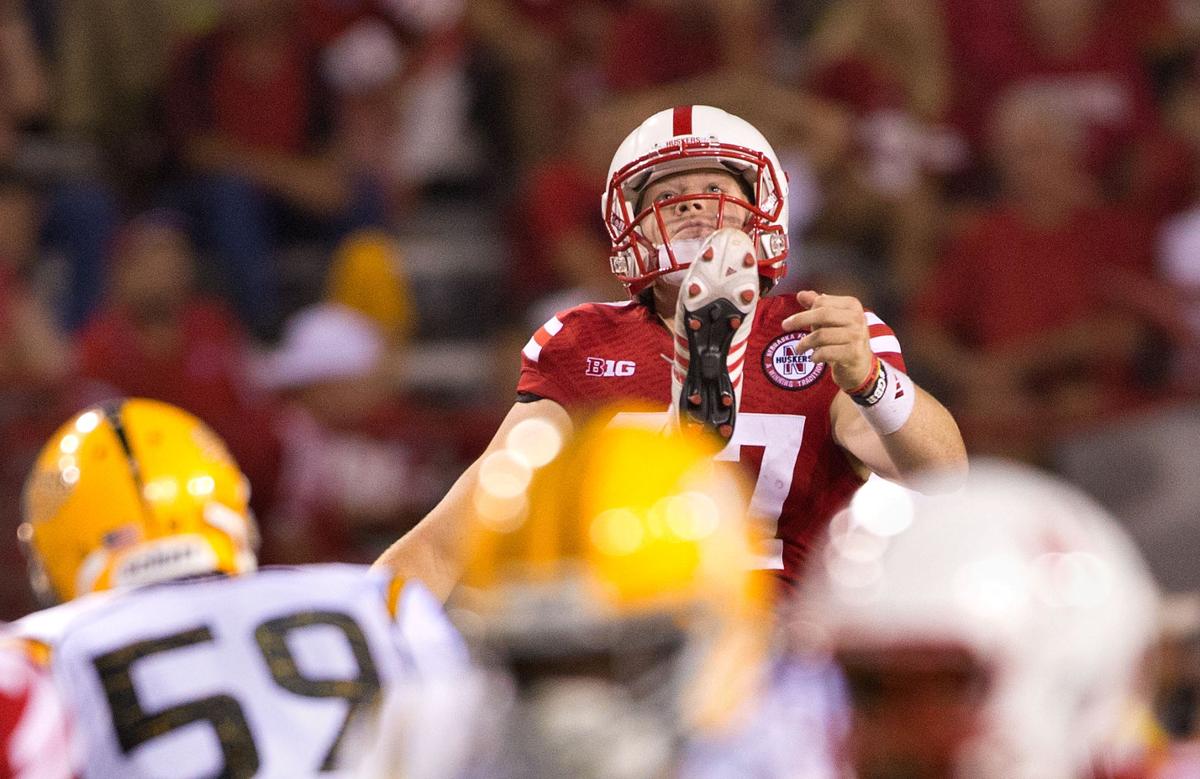 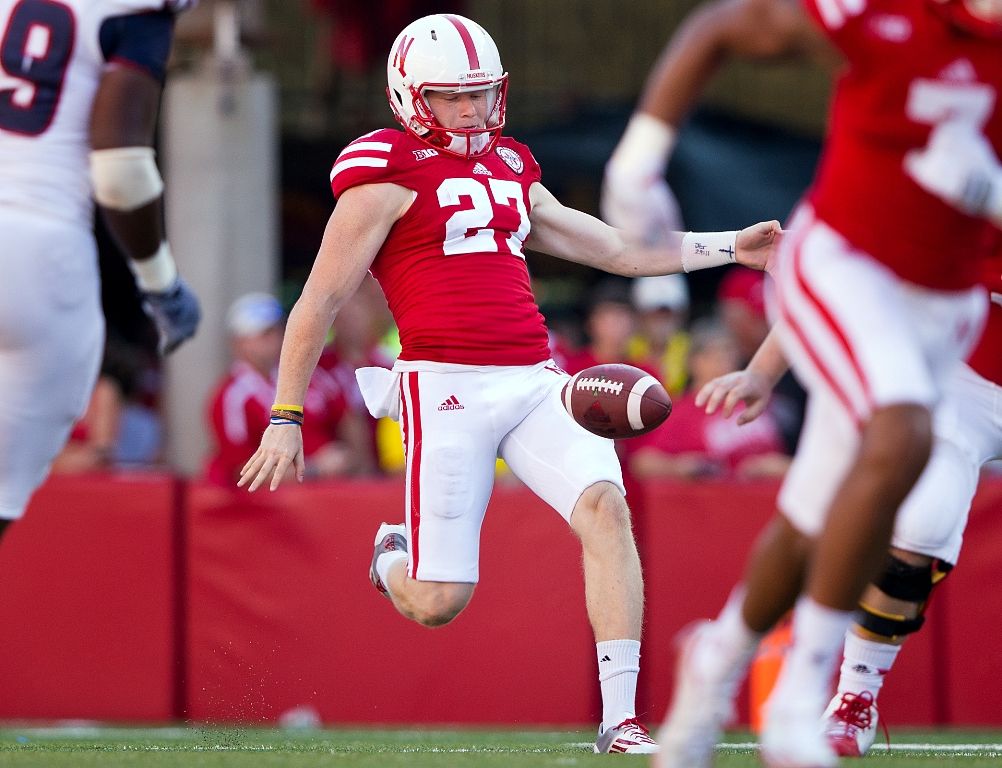 Nebraska's Sam Foltz was Big Ten Punter of the Year and a first-team all-conference selection last season as a junior. 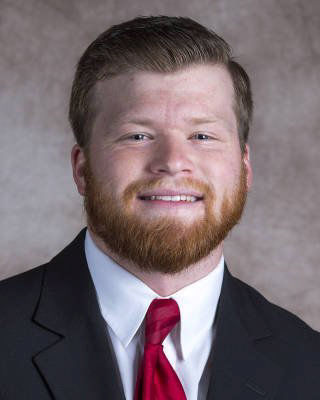 NU players held a vigil Sunday afternoon at Memorial Stadium, near the statue that features Tom Osborne and former NU quarterback Brook Berringer, who died in a plane crash in 1996

Nebraska's Sam Foltz was Big Ten Punter of the Year and a first-team all-conference selection last season as a junior.

LINCOLN — Grab it, grip it and rip it.

“That’s my motto, I guess,” Nebraska punter Sam Foltz once said of his approach to kicking a football.

Catch the snap, hold on tight and swing that right leg to the sky. Don’t hold back. In four years at NU, Foltz rarely did. He chatted up reporters and readily put his arm around teammates. He smiled and laughed and graduated in May with an agronomy degree. A new Husker coaching staff appreciated his insight.

To those who knew him best, he was a hard worker, a hero, a best friend, a brother and a beloved son of Nebraska. Praises flowed from the mouths and minds of those who played with, coached or cheered on Foltz, whose Saturday night death in a car crash sent shock waves of sorrow through the state and the Husker football program.

“This day will be stuck in time forever,” Nebraska coach Mike Riley said after a team meeting Sunday night in Memorial Stadium. “The news that you just really can’t connect or comprehend or understand.”

The 22-year-old Foltz played football at Grand Island Senior High, about 50 miles from his hometown of Greeley. He walked on at Nebraska, won the punting job, earned a scholarship and was best in the Big Ten last season as a junior.

But it was his easy smile and outgoing manner that made him a favorite among NU teammates, many of whom wept, sang and hugged each other at a Sunday afternoon prayer vigil, mourning Foltz, who was the front-seat passenger in a Mercedes sedan that veered off a wet, two-lane road, struck a tree and caught on fire.

The crash occurred in Merton, Wisconsin, a small town 30 minutes west of Milwaukee. Along with two current Husker teammates — who weren’t in the car — Foltz was participating at a nearby kicking camp. Waukesha County authorities pronounced him dead at the scene of the accident, as was the driver of the car, former Michigan State punter Mike Sadler. LSU kicker Colby Delahoussaye was in the back seat and survived. Speed and weather, according to authorities, were factors in the crash.

Teammates began to find out about Foltz’s death via text before noon Sunday.

As they found out, Huskers took to social media in a wave, expressing their pain and starting a Twitter hashtag #RIP27, for Foltz’s jersey number. That’s how some fans — and most of the media — first learned of Foltz’s death, which occurred at 11:43 p.m. Saturday. Former NU players and even former NU coaches — such as former offensive coordinator Tim Beck and former defensive coordinator John Papuchis — chimed in.

Riley, in Texas when the news broke, found out through Husker kicker Drew Brown, who called him. Brown and Jamie Sutcliffe were the two other NU kickers who attended Kohl’s Kicking Camp with Foltz. Sutcliffe also got the news from Brown.

“My heart just feels empty right now, probably the toughest thing I’ve ever been through in my life,” Brown wrote on Twitter.

Earlier in the day on Twitter, Brown called Foltz his hero.

University of Nebraska-Lincoln Chancellor Ronnie Green found out when he took a phone call from NU Athletic Director Shawn Eichorst as he was walking out of church. Green said Nebraska has a standard process for grieving when students die, but Foltz’s reputation with the football team changes that to some degree.

“All of the University of Nebraska is heartbroken,” said Green, pausing to gather himself. “I don’t know what else to say.”

“We lost one of the best young men who I have ever had the honor to coach and who has ever worn the Nebraska uniform,” Riley’s statement read. “Sam was universally loved and respected by everyone he touched and on whom he had a positive influence each and every day. His tragic loss is immeasurable to his family, his friends, his classmates, his teammates and his coaches and our thoughts and prayers are with all of them.”

“Sam was truly a tremendous young man, who represented everything that a Nebraska student, athlete, teammate and friend should strive to be,” Eichorst said. “While his loss is devastating, his impact will be felt forever.”

Riley convened a team meeting Sunday night. It’s the second such meeting he’s had to conduct in his coaching career; an Oregon State player died, Riley said, when he coached there.

A Nebraska athletic department psychologist was present at Sunday’s meeting. Riley said Armstrong stood up and talked to teammates about coming together.

Most of Foltz’s teammates attended a Memorial Stadium prayer vigil. Part of the vigil was conducted in a large circle around the statue of former coach Tom Osborne and former quarterback Brook Berringer, who died in a 1996 plane crash a few months after his senior season.

Nebraska safety Keiron Williams organized the vigil, which was also attended by administrators, members of many other NU teams and some Husker fans. Teammates remembered Foltz as a humble, fun-loving, hard-working guy.

“He was going to be next to me at the altar on my wedding day,” said offensive lineman Sam Hahn. “My best friend in the world. It still hasn’t sunk in yet.”

“He was big friends with everybody,” said Sutcliffe.

Williams told a story about having the same workout number as Foltz — they both wore No. 27 on the field — and initially being offended that he was compared to a punter.

“Little did I know this dude hang-cleans 315 (pounds),” Williams said. “He works out harder than anybody on our team. ... He epitomized what it meant to be a great football player.”

True freshman punter Caleb Lightbourn — who may have the task of replacing Foltz on the football field — said he picked Nebraska in part because of Foltz.

“He told me how great it was, and I believed him,” Lightbourn said.

“This guy was passionately proud of what he did, and how he did it and how he practiced it,” Riley said. “He loved it. That’s where he gained this respect from all these kids. Just the way he approached the day-to-day.

“Right in that weight room, Sam was a well-respected guy. No disrespect to any specialists anywhere in the world, but this guy was unique in that way. He was a punter who was in there with all the other guys.”

Foltz’s high school coach, Jeff Tomlin, knows all about Foltz’s leadership. At Grand Island, Foltz was the best player on a playoff team, a punter, receiver and defensive back who won All-Nebraska honors.

“He’d light up a room every time he’d come in,” Tomlin said. “We should all aspire to live the way Sam did.”

Foltz never complained about injuries, Tomlin said. He was tough and positive.

Husker fans saw those traits in 2015 when Foltz was injured in the season opener against BYU. Though the leg injury appeared serious, he missed just one game after spending hours in the training room.

“This has been my dream, so I only get so many games to live out my dream,” Foltz said in October 2015. “So sitting out any games was hard the way it was. I wanted to come back as soon as possible.”

He struggled some in his first game back at Miami but rebounded to win All-Big Ten honors with a 44.2-yard average. Foltz just kept plugging. He’d planned on tweaking a few things — like better hang-time on his punts — for his senior season. Riley said Foltz would have played for many years in the NFL.

Sutcliffe witnessed Foltz’s work ethic at the kicking camp. Foltz was a camp instructor but worked out Saturday and hadn’t done as well as he’d hoped.

“He kind of looked at me and said, ‘I didn’t do so well,’ ” Sutcliffe said. “So what’s he do? He goes and punts more balls after he just got done. That kid really worked hard. I asked him, ‘What are you doing?’ and he said, ‘I’m going to kick some more.’ The camp’s done and he says, ‘I know.’ ”

The last thing Foltz said to Sutcliffe: I’ll see you Monday. I love you.

“I wanted to see him Monday,” Sutcliffe said. “So did all of us. He meant the world to us. He really did.”

Hahn said Foltz’s final days — his willingness to work with other kickers and improve at his craft — underlined his life.

Remembering Sam Foltz: A compilation of The World-Herald's coverage of the Husker punter's life and legacy

Husker family reacts to tragedy; 'Words will never describe how much I love you Foltzy'

There was an outpouring of emotion Sunday on social media as those who knew him shared cherished memories, messages of Nebraska punter Sam Foltz's impact and more.