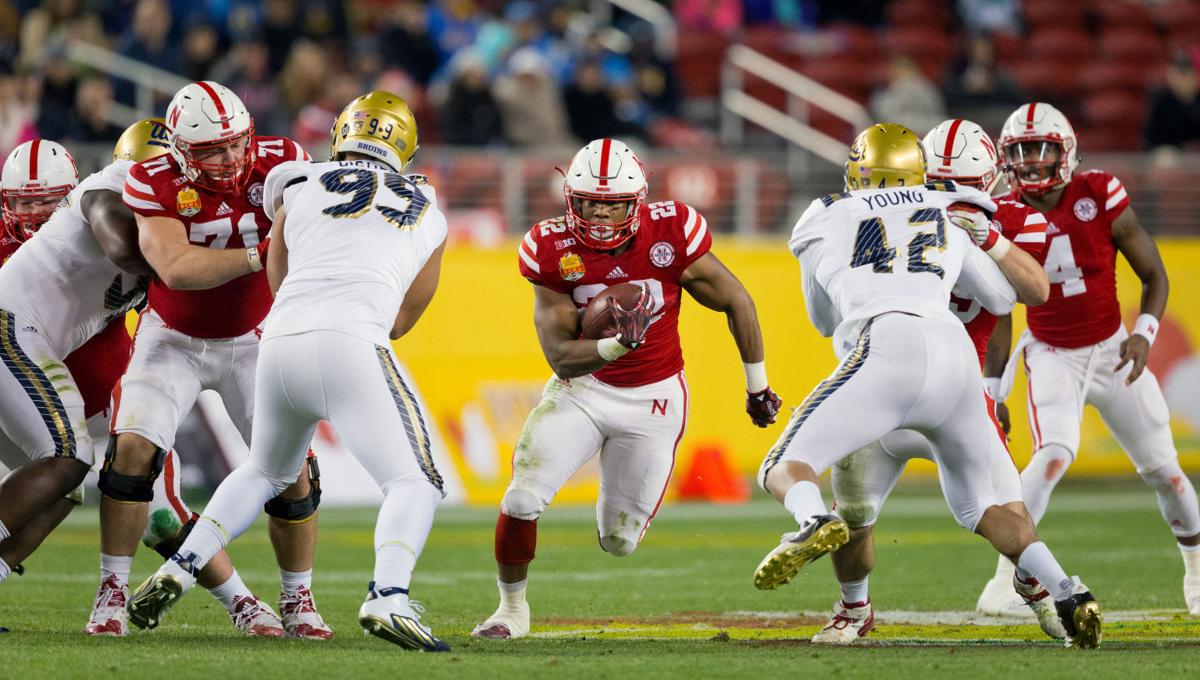 Nebraska will need better first-down production from Devine Ozigbo and others to approach coach Mike Riley’s “top three in rushing” goal. One reason for the goal is to better protect the defense. 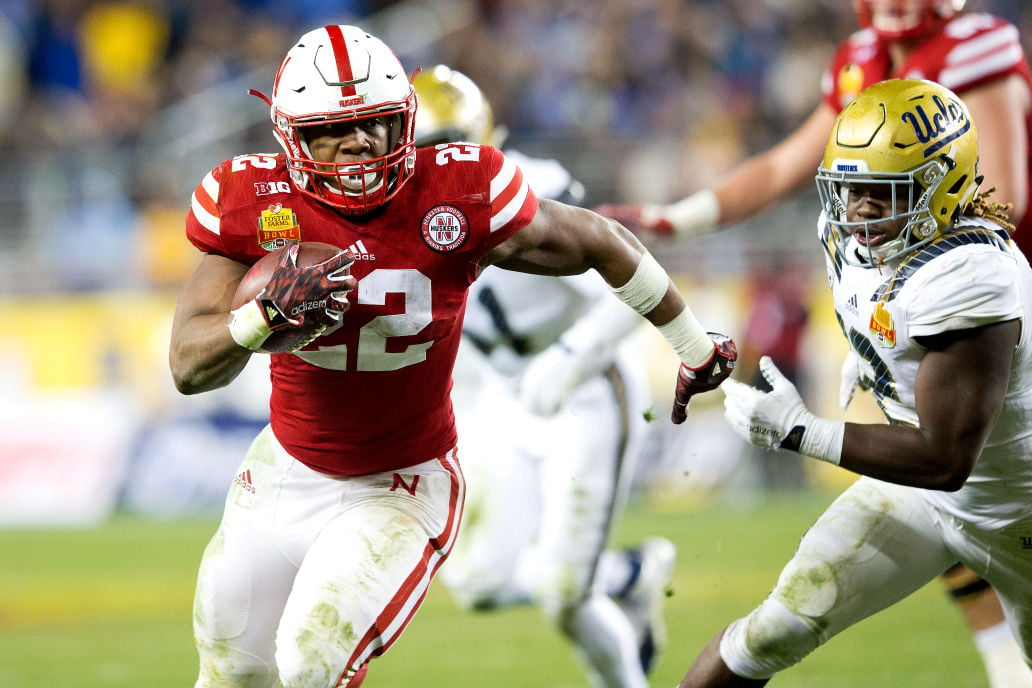 NU running back Devine Ozigbo breaks it to the outside against UCLA Bruins in the Foster Farms Bowl. 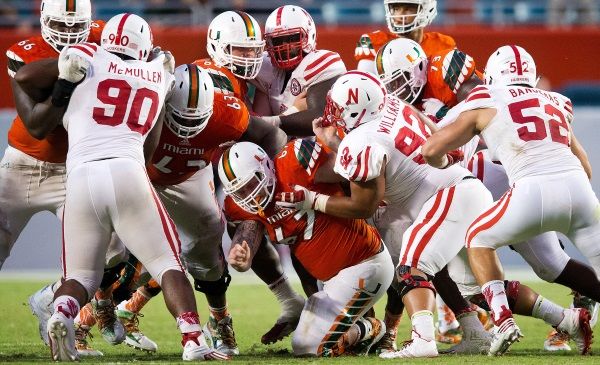 Senior Greg McMullen, No. 90, who played end and tackle last season, is one of the few experienced Nebraska defensive players who have mostly avoided injuries. Defensive coordinator Mark Banker says he has a lot of teaching to do with his relatively inexperienced group.

Nebraska will need better first-down production from Devine Ozigbo and others to approach coach Mike Riley’s “top three in rushing” goal. One reason for the goal is to better protect the defense.

NU running back Devine Ozigbo breaks it to the outside against UCLA Bruins in the Foster Farms Bowl.

Senior Greg McMullen, No. 90, who played end and tackle last season, is one of the few experienced Nebraska defensive players who have mostly avoided injuries. Defensive coordinator Mark Banker says he has a lot of teaching to do with his relatively inexperienced group.

LINCOLN — Nebraska defensive coordinator Mark Banker paused for a second when I asked the question. Not quite a double-take, but he sought clarification.

The question: With just 15 defensive upperclassmen on scholarship, how important will coaching up this defense be, even in the second year of the scheme?

“I consider anybody that played having experience,” Banker said.

But, of the guys who are sophomores and younger, only two of them — Dedrick Young and Freedom Akinmoladun — started significant games last season. Both took their lumps, as did a promising safety, Aaron Williams, in the few games he played prominently. Williams is missing this spring. So is Antonio Reed.

Two players who could be among NU’s top eight on the defensive line — Mick Stoltenberg and Kevin Williams — are also missing spring. Williams, a senior, has been around the block and knows the business, but Stoltenberg, one of those sophomores, sure could have used this spring to emerge. As it is, Banker will wait. And he’ll teach. Banker calls teaching “huge” in his defense’s growth. He repeats the word. Huge.

It’s not new, my emphasis on NU’s defense. Spring football can get repetitive because you often go over the same themes that aren’t broken up by games or by players actually winning starting jobs. Defense was the overriding issue not only in 2015, but, quite frankly, 2014, 2012 and 2011 as well. Inconsistent defense and bad turnovers on offense, usually because the offense is trying to compensate for something the defense didn’t do. The only reversal of those roles occurred in late 2013, when Nebraska’s defense, as if summoned by an ironic football deity, got all stingy in the wake of a Husker offense that fell to pieces because of injuries.

The emphasis on defense remains underlined by the fact that Nebraska has experience on that side of the ball, and many of the most seasoned players — Nate Gerry, Joshua Kalu and Greg McMullen excluded — have had bad luck with injuries. During the first part of spring practice, you saw the defense look more aggressive and loose, but it also gave up some plays, the kind borne of inexperience and a few missing bars from a confidence symphony. Nebraska has just seven scholarship players on the roster left from the 2012 and 2013 recruiting classes. It’s fair to say Nebraska’s current coaches, along with the media, the players and the whole lot, underestimated some of the challenges embedded on the defensive side of the ball.

The offense, thus, has to build itself with those growing pains in mind. And if I had to examine the foundation of Mike Riley’s “top three in rushing” goal, one intent is to reduce the exposure of the defense.

Riley’s last two offenses at Oregon State — the 2013 and 2014 bunches, anchored by future NFL quarterback Sean Mannion — put up some decent numbers, but they didn’t protect their defenses very well. And last year’s NU offense generally held up its end of the bargain, but, again, left the defense defending short fields or handing the opponent points with disastrous pick-sixes. Purdue started four drives inside Nebraska’s 25 in that 55-45 win. The Huskers gave up free points to Northwestern and Iowa as well. In those three games, Nebraska ran for 2.8 yards per carry.

In all others, Nebraska averaged 5.4 yards per carry.

The Northwestern and Iowa losses vexed Riley and his staff. Purdue was an obvious mess — the result of, among other things, having to play a backup quarterback and a true freshman safety — but the Northwestern and Iowa games ... Nebraska had team momentum going into both. It underachieved in both games, especially in terms of line play. It committed killer turnovers in both. It gave up two long runs in both. And, in both, Nebraska had the better talent. It was true then. It’s true now.

To lose both of those games is truly rare. If you want to circle two games last season that Nebraska’s improved run game would seek to correct, circle those.

Circle, as well, Nebraska’s middling yards per carry rate on first down of 4.7. If Nebraska adds just one yard to that — one yard per carry — that would change things. Riley and offensive coordinator Danny Langsdorf were more than willing to run the ball on first down — the 279 carries ranked 32nd nationally, tied with run-heavy Kansas State. Ahead of Wisconsin and Ohio State. Ahead of LSU. Just one first-down carry behind Arkansas, where Bret Bielema loves his run game.

The Razorbacks also averaged 5.5 yards per carry on first down.

As the second half of spring starts, and Nebraska engages more heavily in scrimmages, I’ll be watching that first-down run success. And I’ll be watching, as well, to see how the defense, with young, slightly mismatched parts, comes together. That group needs spirit, speed and confidence, and Nebraska’s offense needs to help give it to them with a chain-moving run game.

The Husker position coaches will guide their respective position groups through the Red-White Game on April 16. Get in-depth analysis on each set of players:

I can only speak for about 1 million Nebraskans here. But the first thought that came into my mind when I read about the survey this week was, “Here we go again.”

Devine Ozigbo doesn’t know anything about Nebraska’s depth chart, or when one would be coming that might reveal where the I-backs stand. And Ozigbo finds one positive about it: All of them should have no trouble staying hungry through the rest of spring practice and into fall camp.

Even if every California prospect who suddenly took interest in Nebraska after Keyshawn Johnson Jr.'s commit wanted to play for Nebraska, well…