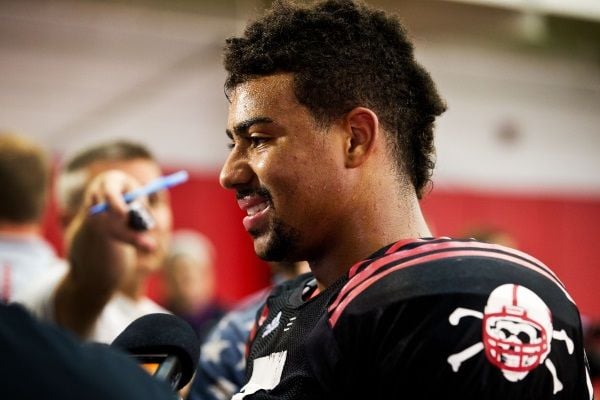 Dedrick Young started 11 games as a true freshman season, and now he's a reason why the linebackers have become the defense's strength. 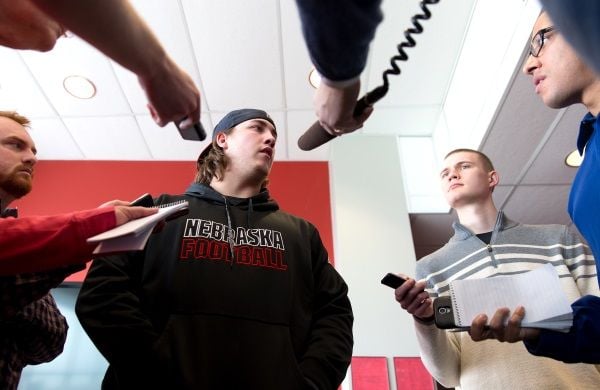 Nick Gates, shown here answering questions from the media earlier this spring, is transitioning from right tackle to left.

Dedrick Young started 11 games as a true freshman season, and now he's a reason why the linebackers have become the defense's strength.

Nick Gates, shown here answering questions from the media earlier this spring, is transitioning from right tackle to left.

A pair of Huskers are poised for a breakout year, according to Athlon Sports.

Left tackle Nick Gates and linebacker Dedrick Young were included among 15 Big Ten players dubbed to be “on the rise” entering the 2016 season. Click here for the complete list compiled by Athlon’s Steven Lassan.

Gates is making the transition from right tackle to left after getting 10 starts as a redshirt freshman last season. Now he’s being called on to protect Tommy Armstrong’s blindside.

“With another offseason to work in the weight room and under coach Mike Riley, expect Gates to thrive as the anchor of Nebraska’s offensive line next season,” Lassan writes.

This spring is big for the entire offensive line. Our Sam McKewon wrote earlier this month that Mike Cavanaugh has “the toughest job of all the position coaches.” Dylan Utter is the only upperclassman with significant starting experience, and almost everyone is either stepping into a bigger role or a new position.

Gates is one of those in a different spot. He’s spent all of spring thus far as the No. 1 left tackle, but he’s not operating under the assumption the starting job is his.

“I’ve still got to go out there, earn a job, do my best and show the coaches I still can do it,” Gates said.

He’s at least already earned praise from his position coach.

“He loves to kick your (rear), not just block you, and I love that,” Cavanaugh said. “Guy’s a worker. You’ve got to have that passion and that drive, and he’s got that.”

Young may have already had what some would consider a breakout season. After enrolling early, he started 11 games as a true freshman last season, ranking fourth on the team with 61 tackles, including five for a loss with a pair of quarterback hurries and three pass breakups.

“Young is only going to get better with more experience, and coordinator Mark Banker should expect another step forward from Young next season,” Lassan writes.

There are still a lot of question marks for that Husker defense, though. NU made a change along the defensive line and coordinator Mark Banker has taken over the role of coaching safeties.

But “at least the linebackers look fairly settled,” McKewon wrote earlier this month. And Young’s a big reason why. Combining him with projected starters Josh Banderas and Michael Rose-Ivey, the linebackers have gone from a weakness to probably the defense’s biggest strength.

“I am proud to single them out,” head coach Mike Riley said, “and I’m proud of the work they did.”

Nebraska had two quarterbacks — 1A and 1B, if you will — at the top of its 2017 recruiting board. 1B — Sayville, New York, signal caller Jack Coan — just picked Wisconsin.

Recruiting: With Keyshawn Johnson Jr. on board, could Huskers see a flood of 'Calibraska' recruits?

Soon after Keyshawn Johnson Jr. committed to Nebraska, a video emerged of a remix to Tupac’s…

Nebraska picked up a big commit from Keyshawn Johnson, Jr. on Wednesday. What does it mean for NU's 2017 recruiting class and the Mike Riley era in general?

Kids today. After their football careers, they have a future as Hollywood directors. Keyshawn Johnson Jr. released his video on Wednesday. It was classy. Well done.

Crop of heralded sophomores ready to blossom for Huskers

After nearly every spring practice — and most practices last fall, for that matter — Nebraska running back Mikale Wilbon would stay late to work on his skills as a pass catcher. Such was the case one Thursday evening this spring, as Wilbon walked by offensive lineman Jerald Foster.

The first half of Nebraska football’s spring camp is complete. This Rewind focuses on a few takeaways at the halfway point, since NU has eight practices — and the spring game — after spring break.

Nebraska receiver Alonzo Moore started chuckling as he thought back to his naiveté as a rookie. He was this always-smiling Louisianan who carried barely 170 pounds on his 6-foot-2 frame — “no muscles at all, just bone,” he said. My, how things have changed.

Devine Ozigbo doesn’t know anything about Nebraska’s depth chart, or when one would be coming that might reveal where the I-backs stand. And Ozigbo finds one positive about it: All of them should have no trouble staying hungry through the rest of spring practice and into fall camp.

Nebraska has three commits for its 2017 recruiting class, and a number of fans — and at least some recruiting pundits — figured Aurora’s Austin Allen would already be in the fold.