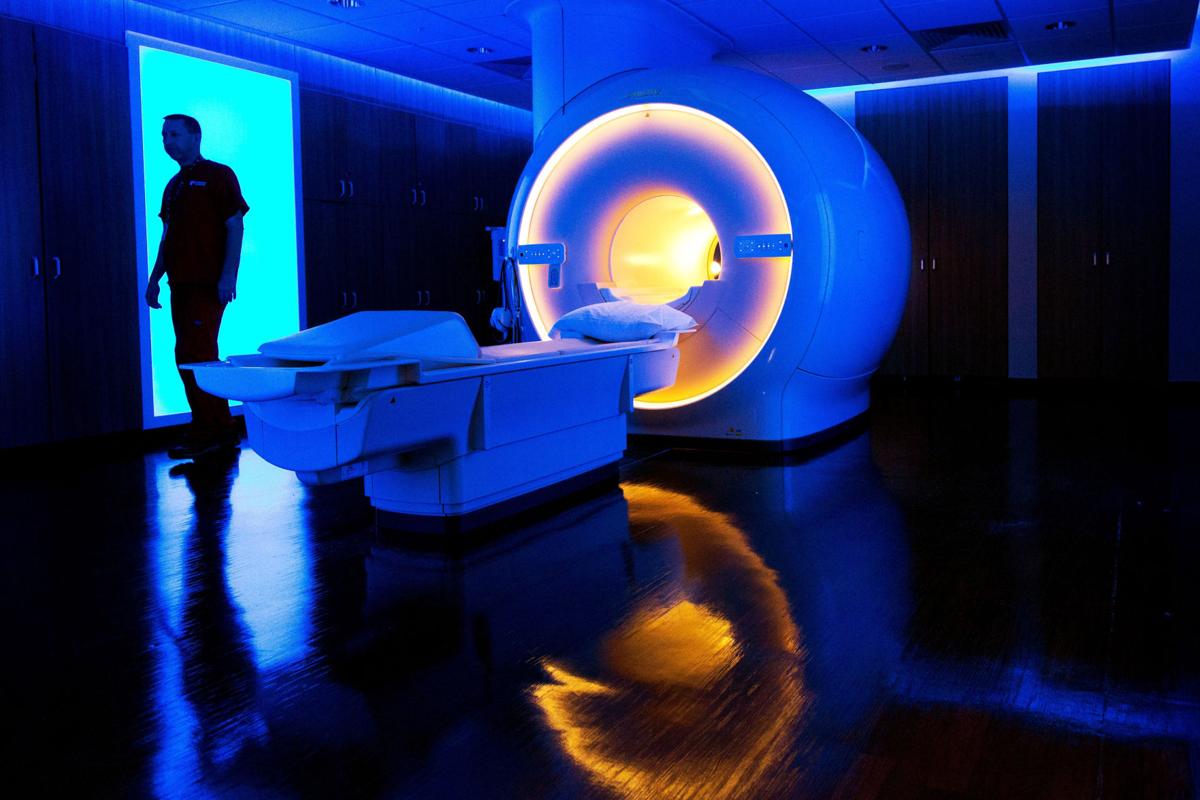 The MRI machine at Lauritzen Outpatient Center helps doctors see inside patients without the need for surgery, helping them detect disease and follow its progress. 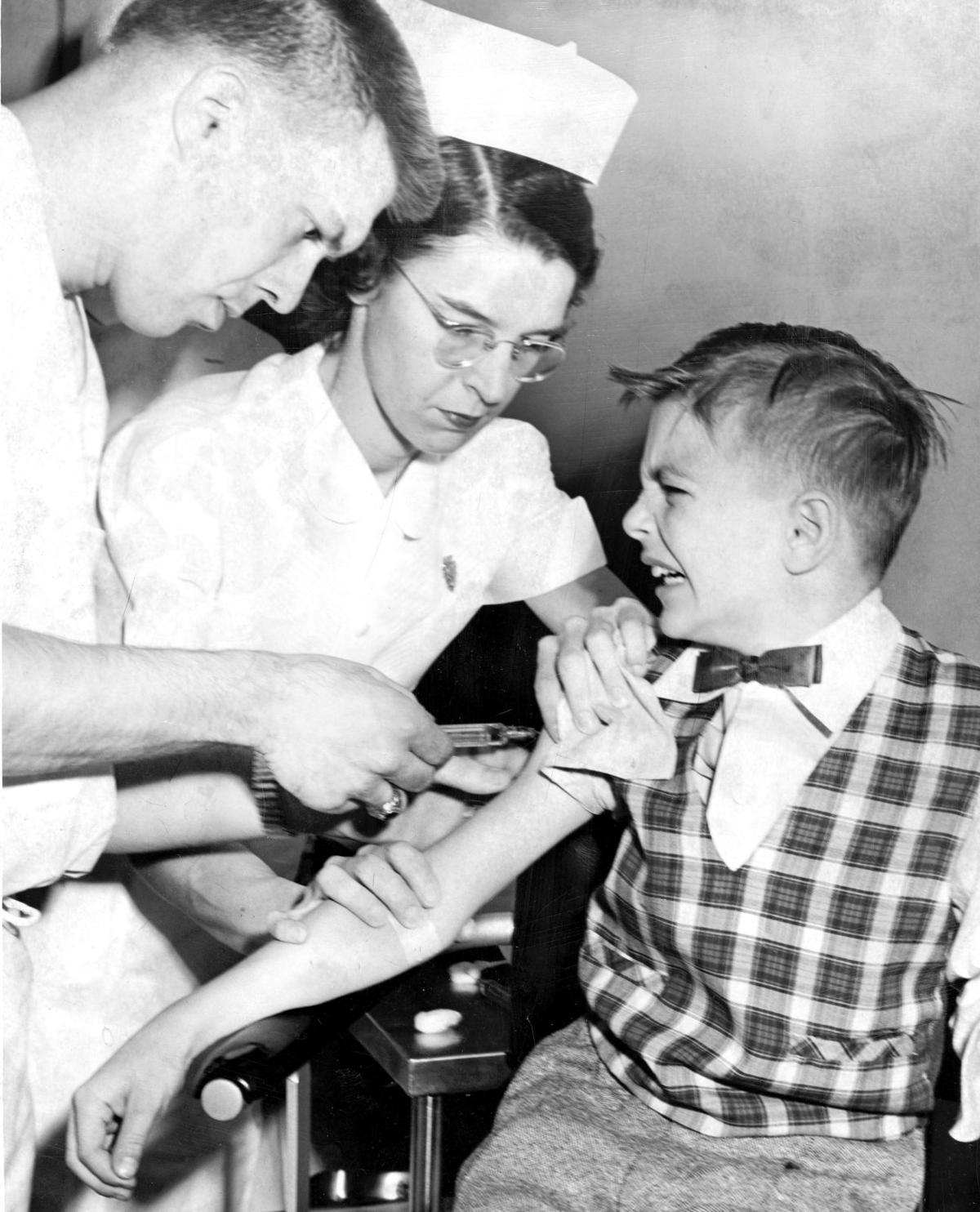 Vaccines, such as for polio, have helped stop the spread of many deadly diseases. 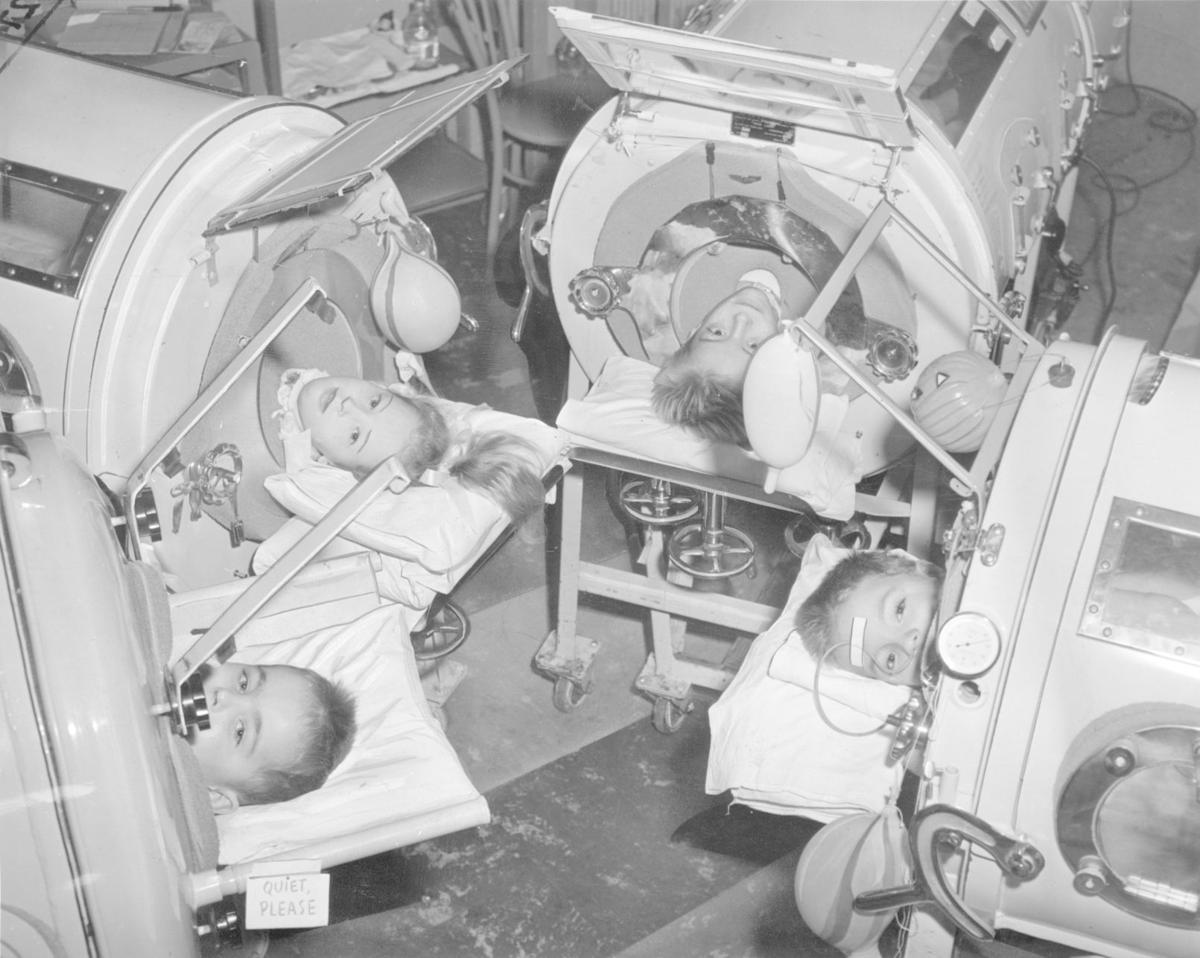 Youngsters in iron lungs at Children's Memorial Hospital. Thanks to vaccines and other developments, the huge machines used to facilitate breathing are a thing of the past. 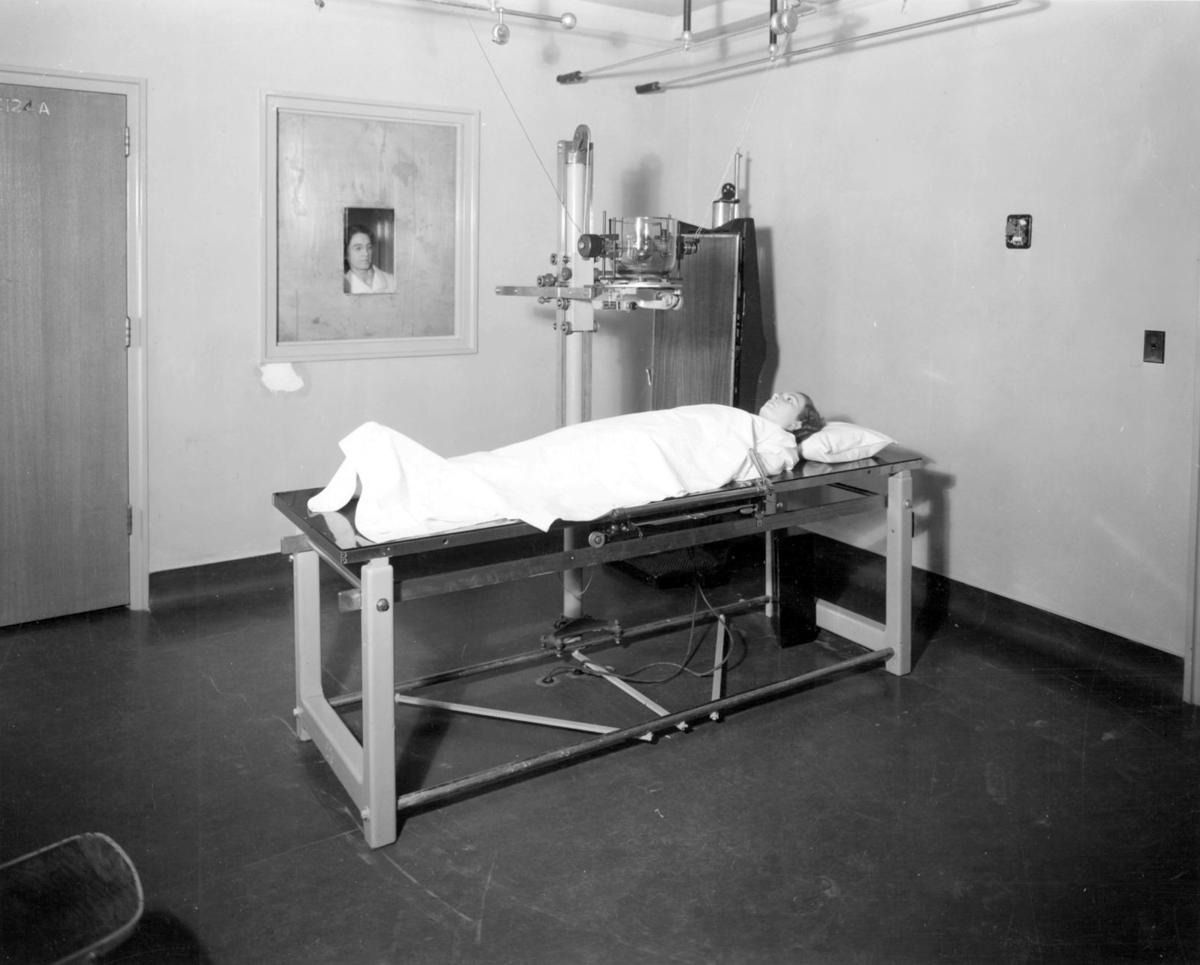 A Douglas County Hospital X-ray room in 1941. A key challenge is to make sure future discoveries are available to everyone.

The MRI machine at Lauritzen Outpatient Center helps doctors see inside patients without the need for surgery, helping them detect disease and follow its progress.

Vaccines, such as for polio, have helped stop the spread of many deadly diseases.

Youngsters in iron lungs at Children's Memorial Hospital. Thanks to vaccines and other developments, the huge machines used to facilitate breathing are a thing of the past.

A Douglas County Hospital X-ray room in 1941. A key challenge is to make sure future discoveries are available to everyone.

Medical science has made remarkable strides over roughly the past 75 years, beating back many once life-threatening illnesses and helping to extend the life expectancy of a child born in 2016 to nearly 79 years.

By all measures, the pace of change appears to be accelerating. The number of drugs approved by the FDA each year more than doubled between 1950 and 2010. The number of new scientific journals increased 3 percent a year between 1900 and 1996, with some 2 million scientific research articles published in 2012 alone, according to a 2015 study in the Journal of General Internal Medicine. And that doesn’t count changes on the business side of medicine, including the growth of electronic medical records, the increased use of telemedicine or the advent of the Affordable Care Act.

“The speed of information, the speed of change is increasing,” said Dr. Lynell Klassen, a researcher and professor of internal medicine at the University of Nebraska Medical Center.

With his help and that of several other area physician- scientists, we’re pausing to take a quick glance back, highlighting a few key advances that have brought us to where we are today, and to train our sights on the future and what advances we — and our children — might be able to expect in our lifetimes and theirs.

The list is by no means complete. And it comes with caveats, curveballs and complications we can’t predict. A decade ago, for instance, few experts likely would have predicted that an epidemic of opioid drug use would cut down so many young people that it would factor into reducing the nation’s average life expectancy two years in a row, in 2015 and 2016. Instead of expecting to live 78.8 years, as babies born in 2014 could expect to do, those 2016 babies on average can anticipate 78.6 years.

But Klassen said he tells students they’ve got a lot ahead of them.

“This is really an exciting time to be in medicine,” he said. “All of the possibilities, the potential for understanding and altering our life functionality is greater than it’s ever been in the past.”

A key challenge, said Dr. Joseph Stavas, chairman of radiology at Creighton University School of Medicine, will be figuring out how to make sure the new technologies are made available to everyone and eliminating disparities across regions and ZIP codes.

“There are so many advances, but are we able to share them?” he said.

A look at the past

In the 1930s and 1940s, hospitals were full of young people sick and dying of routine infections, from tuberculosis to appendicitis. This group of compounds, which includes antibiotics such as penicillin, changed that — literally overnight.

As a consequence, however, antibiotic resistance has become a concern, leading to the need to develop alternatives. He and other UNMC researchers are involved in a study testing an enzyme used by a type of virus that infects bacteria as one possible option. Several others also are under study.

Vaccines ended epidemics of childhood killers such as polio, diphtheria and pertussis, and provide protection against those such as measles and mumps. The eradication of smallpox, certified in 1979, is considered one of humanity’s greatest accomplishments, said Dr. Ali Khan, dean of the College of Public Health at the University of Nebraska Medical Center. Some estimate that the eradication campaign saved 500 million lives.

While this could go by other names, the common theme is the use of data to protect us from unproven and even bogus treatments. This category includes the use of large cohort studies (such as the Framingham Heart Study launched in 1948 to identify risk factors for heart disease), and the ongoing use of controlled studies to test new drugs and other therapies.

Nebraska Medicine physician Dr. Lydia Kang and co-author Nate Pedersen wrote about some dangerous treatments in their 2017 book, “Quackery: A Brief History of the Worst Ways to Cure Everything.” The list includes the mercury-laced pills Abraham Lincoln took for headaches and the strychine-infused anti-gas tablets Adolf Hitler took.

But in other cases, careful research has led to better options. When UNMC’s Klassen began practicing more than 40 years ago, a standard treatment for rheumatoid arthritis involved gold shots and 32 aspirin a day. Today, he said, rheumatologists have 15 different medications from which to choose.

Imaging technologies of increasing power and precision — X-rays, CT, MRI, PET scans, portable ultrasound, 3-D mammography, endoscopies with pill-sized devices, in some cases coupled with biopsies — have given us the ability to peer into the body, in some instances to the cellular level, without cutting it open, both to detect disease and follow its functions.

Beginning in 1990, researchers over the course of 13 years sequenced all 3 billion letters, or base pairs, in the human genome, the complete set of DNA in the human body. Not only did the Human Genome Project provide a blueprint of the body, it set the stage for further efforts to detect, prevent and cure diseases. More on that later.

A peek into the future

The Humane Genome Project gave us the blueprints; the next step involves putting that knowledge to use in medicine. The federal Food and Drug Administration recently approved the first gene therapy in the United States for an inherited disease, a form of blindness, and the first in which a corrective gene is given directly to the patient. An Omaha girl saw improvements in her vision after receiving the treatment in a clinical trial.

Other areas where work has begun:

If genes and DNA are the hardware, epigenetics is the software, said Dr. Sanjay Singh, professor and chairman of neurology at Creighton University School of Medicine. Essentially, epigenetics is all of the biological processes that determine the expression of genes, including turning genes on and off. If researchers can turn off a harmful gene, he said, it’s like it never existed. Some trials already have occurred in blood cancers.

A bacteria-derived system called CRISPR, a so-called molecular “scissors,” has been hailed as offering a more precise way to edit DNA, potentially offering a way to edit out faulty genes. UNMC researchers have devised an easier way to use the system, which has received a significant amount of interest from other researchers.

Though researchers today can target some cancer treatments based on the tumor’s markers, true personalized medicine will involve the ability to analyze a person’s genome and treat various conditions, from cancer to epilepsy, based on individual genetic variations.

Such precision will require what’s being called Big Data, the use of computers to sort through and analyze vast amounts of data. UNMC is one of 14 centers testing IBM’s Watson system, which can identify relevant mutations and potential drugs that may be considered in a treatment regime — all based on the patient’s genomic profile and the specific mutations.

Also in the computing realm, scientists are envisioning the future use of artificial intelligence in medicine, as well as technologies such as augmented reality and virtual reality. The first 3-D printed drug, used to treat epilepsy, is already in use, and doctors are using 3-D anatomical models, such as a brain with a tumor, for surgical preparation and other purposes. Jorge Zuniga, a University of Nebraska at Omaha professor, is working to improve the inexpensive, 3-D printed prosthetic hand he has designed for kids. But scientists also foresee the use of bioprinting, in which human cells are used for 3-D-printed heart valves, ears and organs.

Though we’re just beginning to scratch the surface of figuring out how we interact with our microbiome — the many microbes that live in us and how they affect our health — Rupp said we are starting to learn how to use prebiotics and probiotics to enhance it.

Check out the changing world of medicine or catch up with an Omaha icon who is going strong at 97.

Omaha — our mission city — is transforming in big and impressive ways. For proof, look at our bustling sectors: health and medicine, sports and recreation, arts and entertainment, education and outreach, and business and real estate. Read more