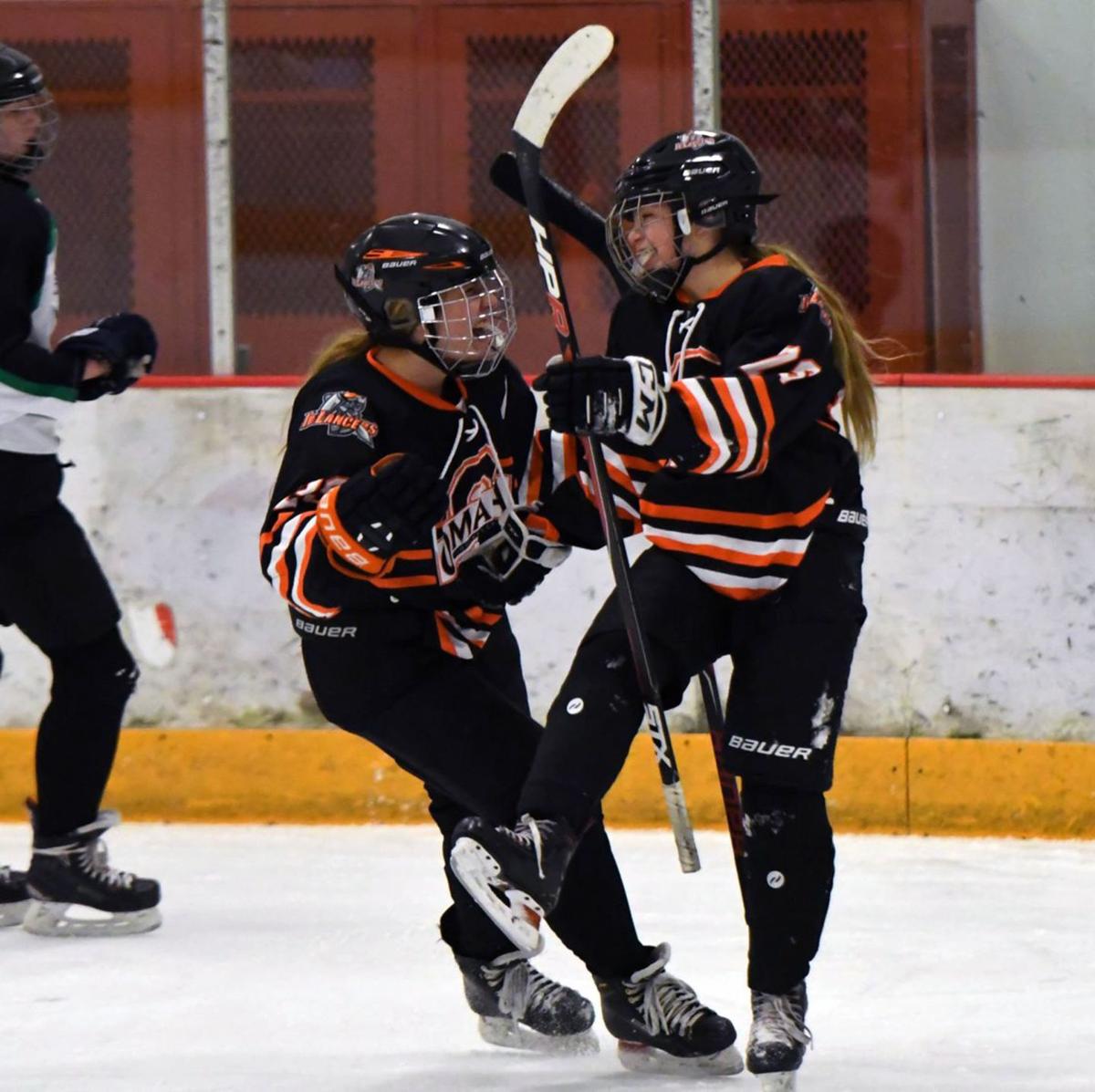 Calie Peterson (right) and her teammate celebrate after a goal. 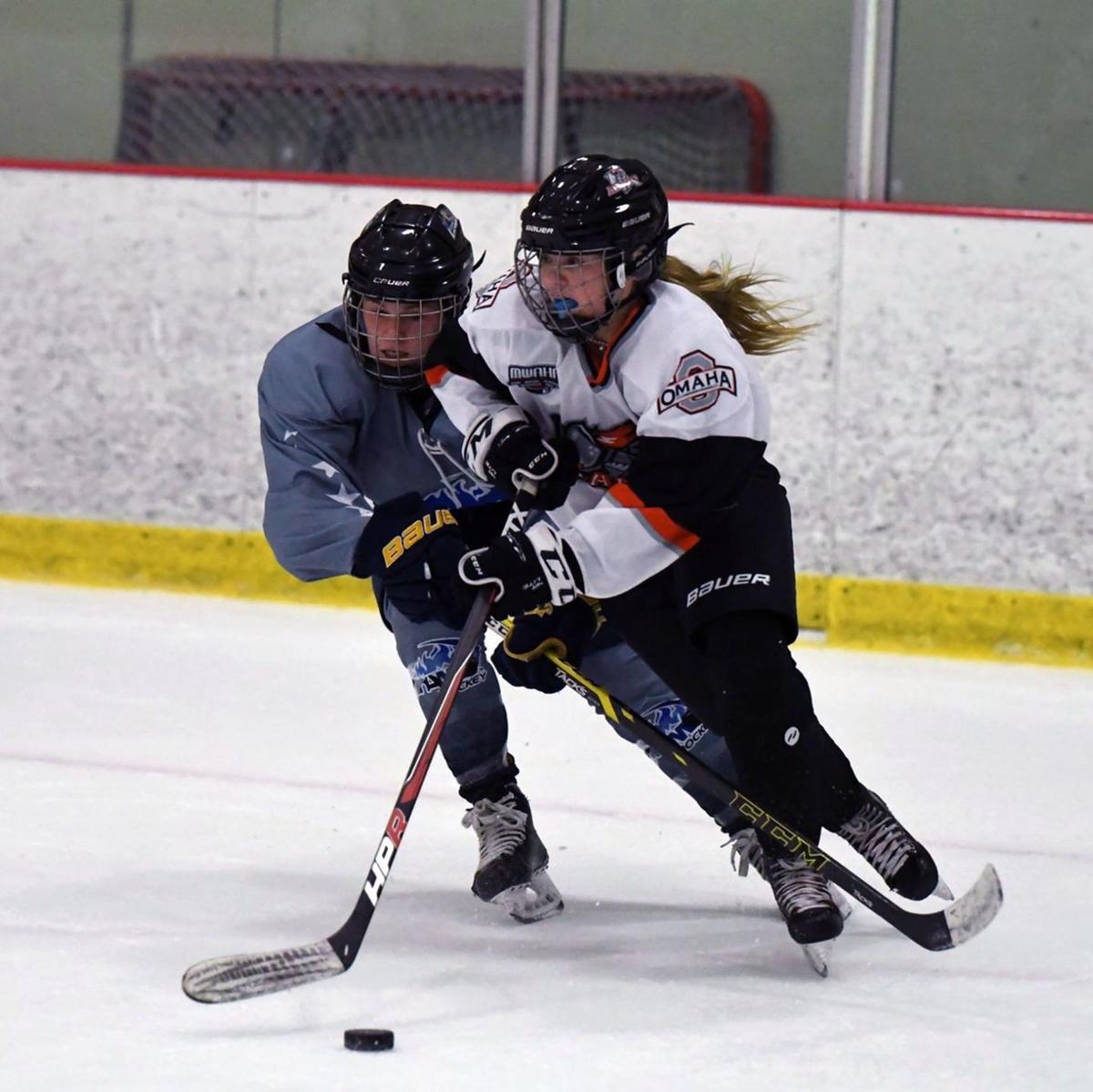 Calie Peterson skates with the puck while a defender is on her hip. 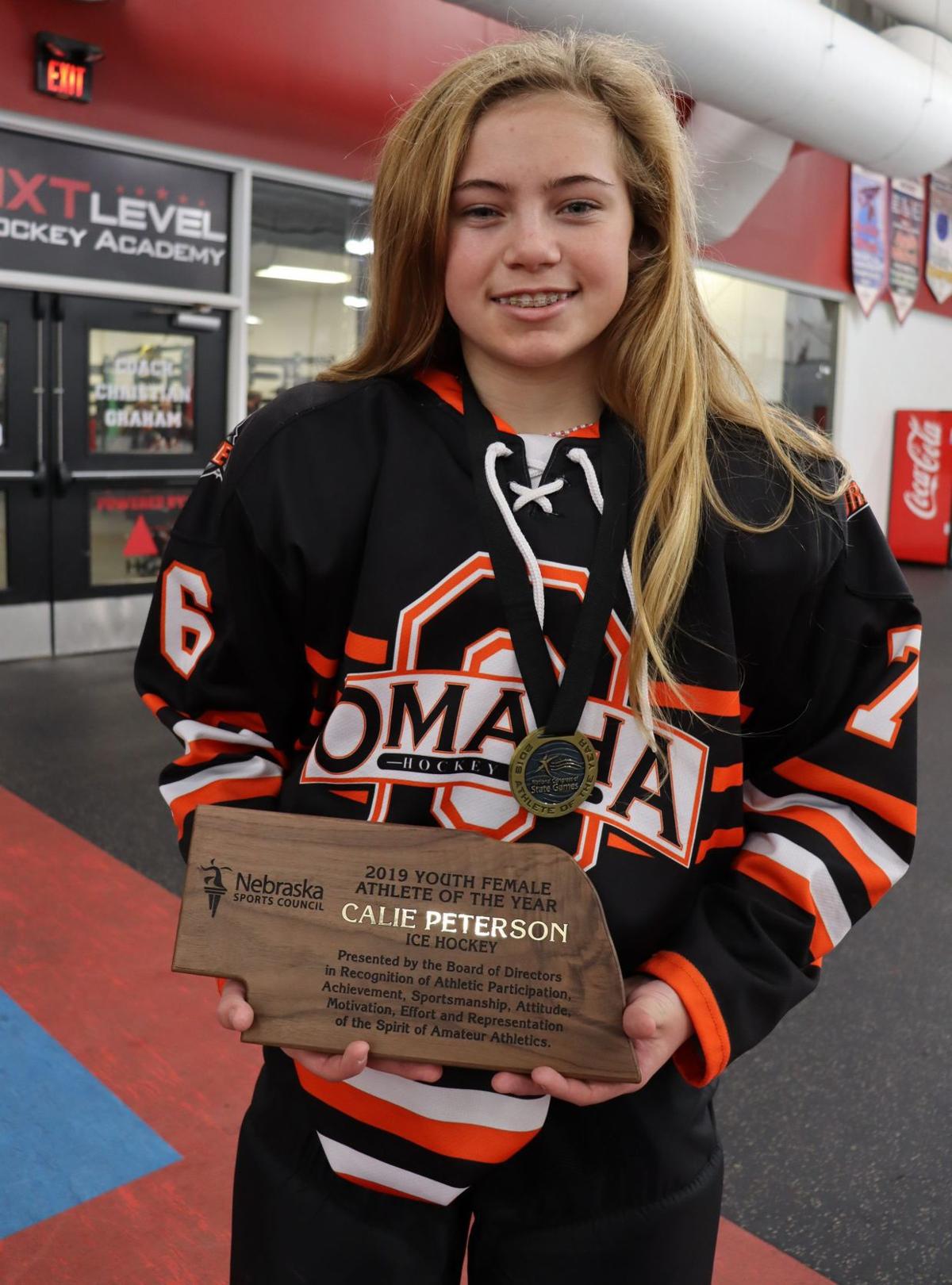 Calie Peterson holds her 2019 Female Athlete of the Year award presented by the Nebraska Sports Council.

Calie Peterson (right) and her teammate celebrate after a goal.

Calie Peterson skates with the puck while a defender is on her hip.

Calie Peterson holds her 2019 Female Athlete of the Year award presented by the Nebraska Sports Council.

Growing up with an older brother can be difficult when it comes to competition. But growing up playing sports with all boys is another beast. For Calie Peterson, both of those things are true.

The 14-year-old has been playing on a travel hockey team since she was 6 years old. Many nights and summers are filled with travel and hockey with not much time for leisure in between, including, for most of that time, being the only girl skating up and down the ice.

“It’s fun, but it can get tiring at times,” Calie said. “Sometimes I just want to be home in my own bed, but I like it.”

The Peterson’s passion for hockey came from Calie’s mother, Stacy, who grew up a hockey fan, and then played in a men’s recreation league until Calie’s older brother, Ethan, was born.

“I used to go to all the Lancer games really. Then I tried hockey one year and played on the Metro Classic Hockey League when I was 20. I learned there and then I got pregnant with my son, so I didn’t get to play anymore,” Stacy said. “So then I was like, ‘My kids are going to play hockey’.”

And that’s exactly how it played out. Calie would accompany her mother to Moylan Iceplex for Ethan’s practices. While Calie would watch Ethan intently on the ice, Stacy, eventually, decided to put Calie on the other ice rink.

“I thought I might as well put her in the Learn-to-Skate summer program on the other ice rink,” Stacy said.

“She was there anyways with me. She picked it up a lot quicker.”

From there, Calie’s passion started to take off. After the Learn-to-Skate program, Calie completed the Initiation Program that year too. Shortly after, Ethan took his younger sister under his wing.

“We would shoot pucks in the basement, and we would play PIG but hockey style. It was our own little game and he would always beat me, but I would always call for a rematch,” Calie said. “He would work on stick handling and faceoffs with me because I was center. He taught me how to skate and we used to roller blade around the driveway to just get a feel for the skates.”

At the age of six, Calie played on the U8 Mites boys’ travel team that played up a level in the U10 Squirt Selection division. At such a young age, kids at school wouldn’t believe Calie played hockey, or they just didn’t know the sport.

While mixing in basketball and softball, Calie played hockey with the boys’ travel programs up until the U14 leagues, where body checking is allowed.

While on the boys’ teams, Calie was a key team player by notching the most assists on her teams as well as several “Player of the Game” awards at numerous tournaments. She used her small stature and blazing speed to her advantage against boys’ teams — especially teams that liked to be physical on the ice.

“She was always faster than the boys. They couldn’t keep up with her. She was kind of a natural,” Stacy said. “Ethan had to work at it. She just didn’t care. She would push the boys around and push them over. When she played with the boys, they protected her and, sometimes, she protected them. She was always just one of the boys.”

The main reason for playing eight years with boys was the limited amount of options when Calie started playing hockey.

“Here in Omaha, it has taken a while to take off. We started her in boys because there was so much more there,” Stacy said. “I mean, the girls, you were 14 years old, but all lumped in with six, seven and eight year olds because didn’t have enough girls to make a team.

“Now, it practically doubled, at least, in the last three years. That’s why we were so hesitant about moving her to girls until she could make that top level team.”

Last season is when the Peterson’s decided to make a change and move to girl’s hockey. As a seventh grader, Calie made the Tier II Omaha Lady Junior Lancer U19 team – the top girls’ team in Omaha.

While starting at center, the 5-foot-1 center finished with 20 goals and over 15 assists in her first season.

“It was definitely different. I never did like playing with girls my age because they weren’t as advanced,” Calie said. “The speed kind of stayed the same by playing with older girls, but the boys are different.”

Between the two, Calie misses the play on the ice with the boys, but loves the comradery of the girls team.

“I like (playing with the boys) a lot more. It’s a lot more fun,” Calie said. “The girls are more of a family, but the boys are always trying to compete against each other. The girls pick each other up more.”

Calie continued that high level of play into this season. During the Colorado Cup Tournament, she was awarded “Playmaker of the Game”. Then at the Chicago Girls Winter Classic, Calie finished the tournament ranked 17th of 529 girls in total points for all divisions.

“The bench went crazy. The kid was small too,” Calie said. “He was probably a little smaller than me, but I wanted to do it again. (My brother) was always a hitter. He would rather hit than play the puck.”

“I didn’t realize it was that big of a deal,” Calie said.

From there, Calie was selected as one of the top 68 girls in the country to attend the STX 68 in Chicago in August – which is a four-day Premier Major Bantam Camp that tests strength, conditioning and on-ice skills.

With the top 68 boys and top 68 girls selected from all over the United States, Calie’s team finished undefeated during the combine, while, personally, she tied for seventh place in total points scored. Furthermore, her biggest accomplishment was being ranked first overall out of the 68 girls for the on-ice testing and was named the fastest skater in the 30-meter backwards skate.

While going to camps or playing in games is the way to showcase yourself to friends, family, coaches or scouts, it’s the work that’s put in when nobody is around that separates many athletes. After attending camps in April, Calie spent the entire 10 weeks of summer working out on and off the ice at Moylan Iceplex with NXT Level Hockey Academy for four hours a day and five days a week.

“When I went to the Central Districts Hockey Camp and the STX 68 Camp, the whole time they talked about college,” Peterson said. “And I know if I want to play at the college level then I have to start the little things early otherwise it’s not going to be an option.”

“She’s never complained once about getting up at 6 a.m. for other things because she’s had to do it for hockey and it makes her more structured,” Stacy added.

The friendships she’s made has trumped about any kind of sport. While some current teammates travel from Des Moines to Omaha for practice or other cities for games, Calie has traveled to Minnesota, Wisconsin, Illinois, Colorado and St. Louis – to name a few – for camps and tournaments.

She’s developed relationships with other players from about any place in the United States and even Canada. Wherever her future takes her, there’s a good chance a person she knows will be within distance.

Many East Coast prep schools have inquired about Calie, but the Peterson’s would prefer her closer to home. Calie wants to move up to the AAA division for her next step, but the two closest teams are in Sioux Falls or Chicago.

This season, she has totaled over 30 goals and more than 20 assists in only 22 games to help the Lady Junior Lancers be ranked 10th in the nation. It’s another milestone for Calie to add to her long list of awards and accomplishments. Even if she doesn’t know how long the list really is.

“She’s never shown me all of them!,” Calie said.

“We’ve got to keep her humble,” Stacy added. “She knows but she doesn’t think about it.”