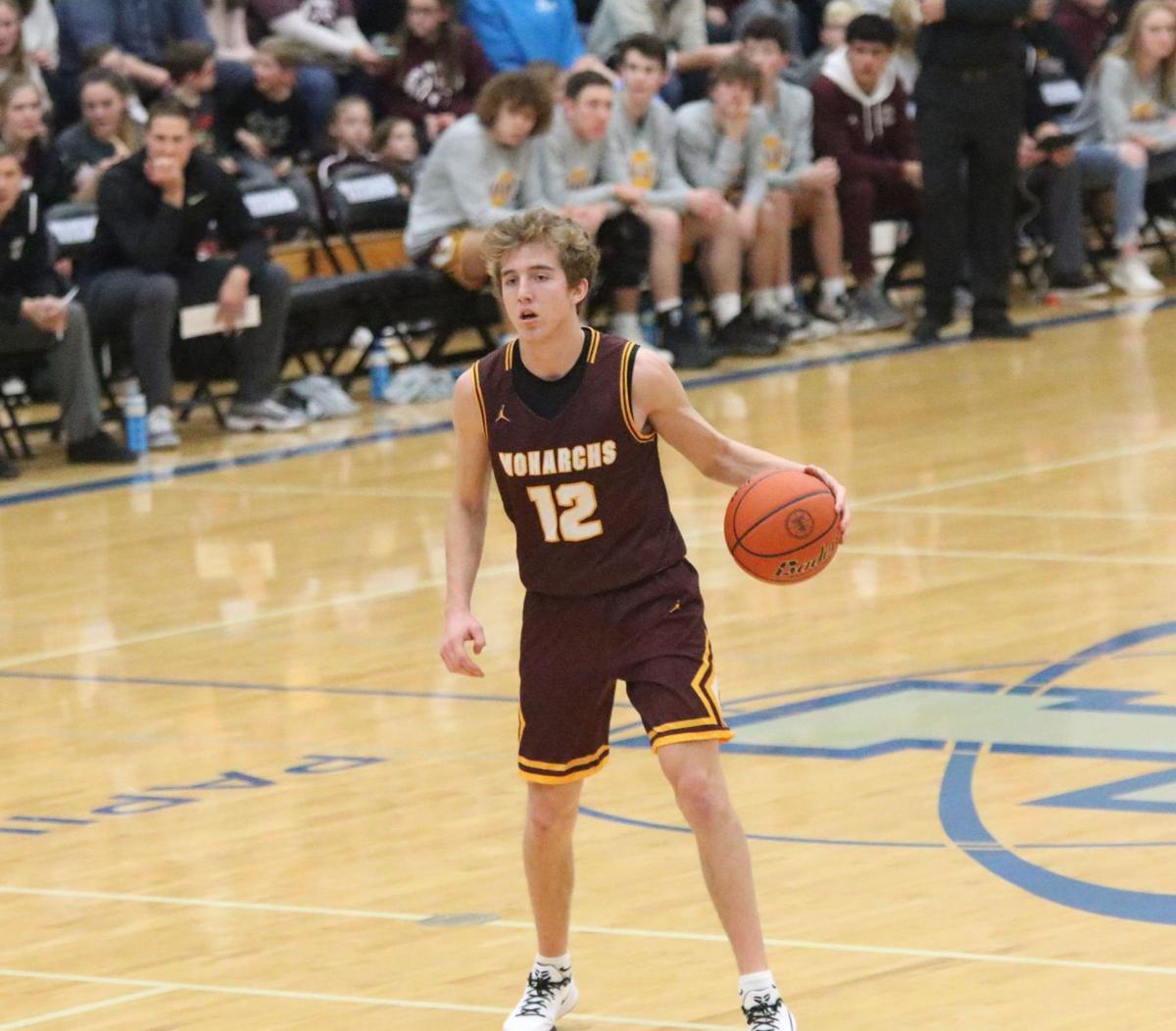 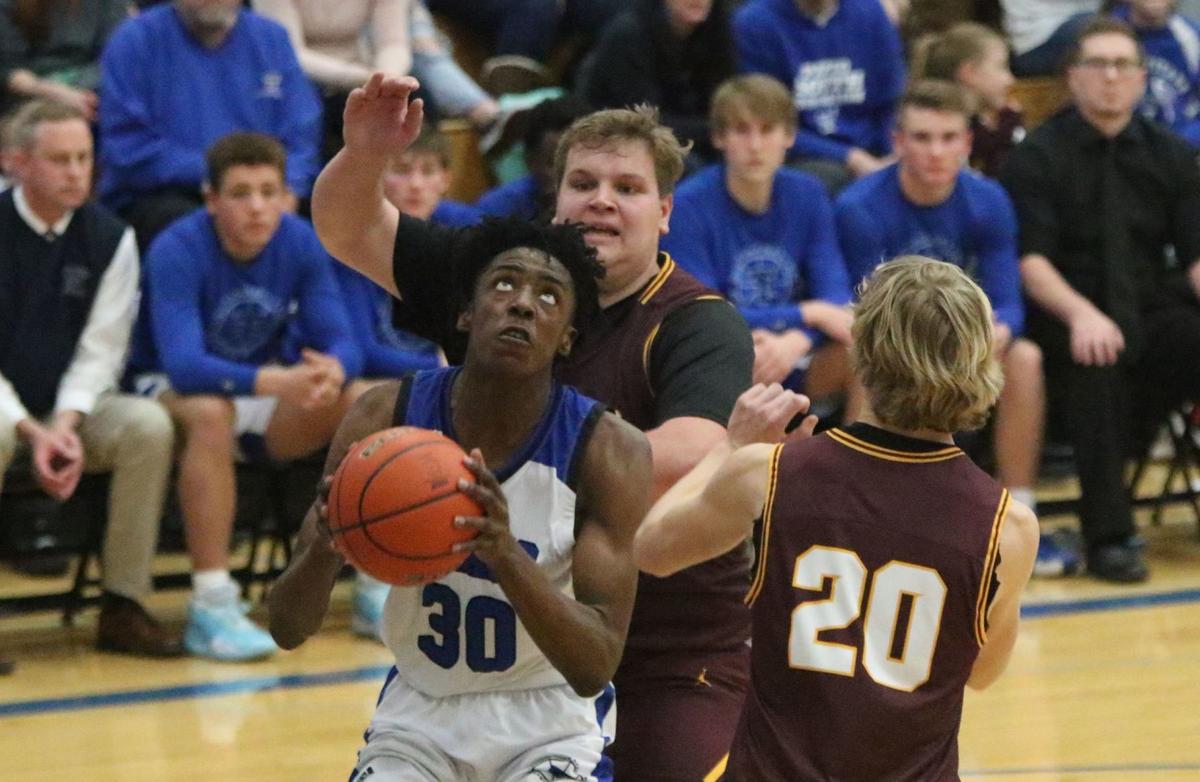 Papio South’s Danair Dempsey goes up strong against Papio in their match up Friday night.

Papio South’s Danair Dempsey goes up strong against Papio in their match up Friday night.

The anticipation was high at Papillion-La Vista South high school for the showdown between Papio and Papio South. Both teams were coming off big wins in the Metro Conference Holiday Tournament so it was sure to be a fun one.

The game did not disappoint. Runs, big shots and the electricity of the crowd kept this one fun throughout. Papio South ended up with the victory, defeating the Monarchs 55-46.

The Titans started the game with the first run, going up 17-4 early and holding a 19-8 lead at the end of the first quarter.

Luke Lindenmeyer scored seven of Papio’s first 11 points. Outside of Lindenmeyer, the Monarchs did not get a field goal from a starter until 5:23 left in the second quarter when Kyle Ingwerson knocked down a jump shot.

The Monarchs got focused on defense and outscored the Titans 17-10 in the second quarter to cut the lead to 29-25. Kyle Ingwerson knocked down a three at the halftime buzzer to give the Monarchs all the momentum. Papio closed the half on a 10-3 run.

“Well one it’s a rival game and we knew they would have a few runs themselves so for us it was about trying to stay normal,” Papio South coach Joel Hueser said.

“Our big thing that we were preaching was the team that was most normal would win and again, there is a lot of hype with this game and kids can sometimes get overwhelmed by everything so you want to just stay in the moment and stay true to what you do.

“It was a good second quarter, especially the end of the quarter, but I don’t know if we weren’t ready to play or if our defense just wasn’t that sharp to start with,” Papio coach Dan Moore said abut the first half. “That plated the end of the game even though we cut it down to two; we were down 13 in the first half.

“You dig yourself a hole and you have to come back. I think we are fairly even teams and if the game is even for the most part then we make a couple shots and we win the game.”

Moore added “credit to them for playing well early. They hit a few shots and then got some back doors and out guys just weren’t sharp.

“We are scrappy so we scrapped back in and our second half was pretty scrappy.”

To start the second half, both teams went back and forth. The Titans jumped out to a 40-34 lead and then a Kyle Ingwerson three made it 40-37.

Danair Dempsey then hit a three and Preston Kellogg finished an and-one to make it 45-43 with 4:47 left in the game.

The Titans then focused up on defense and closed the game on a 10-3 run to win the contest.

Hueser said seeing good defense was his main takeaway from this one.

“It’s refreshing,” Hueser said. “We have felt that is an Achilles heel for us right now because as efficient as we have been offensively we just have not been that good defensively so that was good to see.”

Hueser also added that he has enjoyed their starts to the game and the teams energy.

Moore credited the Titans for their play in the game and their execution.

“We hang our hat on our defense, we got guys that can shot a little but in the games that we score 80, we played good defense and shot it well,” Moore said.

“The defense was on our heels early because they got a back door and they slipped it and got a couple and-ones and we are down 13-14 points and it’s an uphill battle the rest of the way.”

Moore added “they hit some big shots so credit to them for that.”

For the Titans, Danair Dempsey led the way with 21 points on 8-for-12 shooting. Jared Mattley added 12 points, six rebounds and three assists.

Papillion-La Vista 76. North Star 72 — The Monarchs bounced back from their loss at Papio South with a close win over Lincoln North Star. They used a 16-9 advantage after the first quarter to pace their victory.

Papillion-La Vista South 88, Burke 57 — The Titans used a 32-10 third quarter advantage to rout the Bulldogs and move to 8-4 on the season.

Jared Mattley recorded 24 points, five assists and four rebounds for the Titans. Mattley was also 8-for-10 shooting from the field. Danair Dempsey recorded 18 points and five rebounds and Graham Cassoutt added 14 points. The Titans shot 53 percent from the field in this contest.