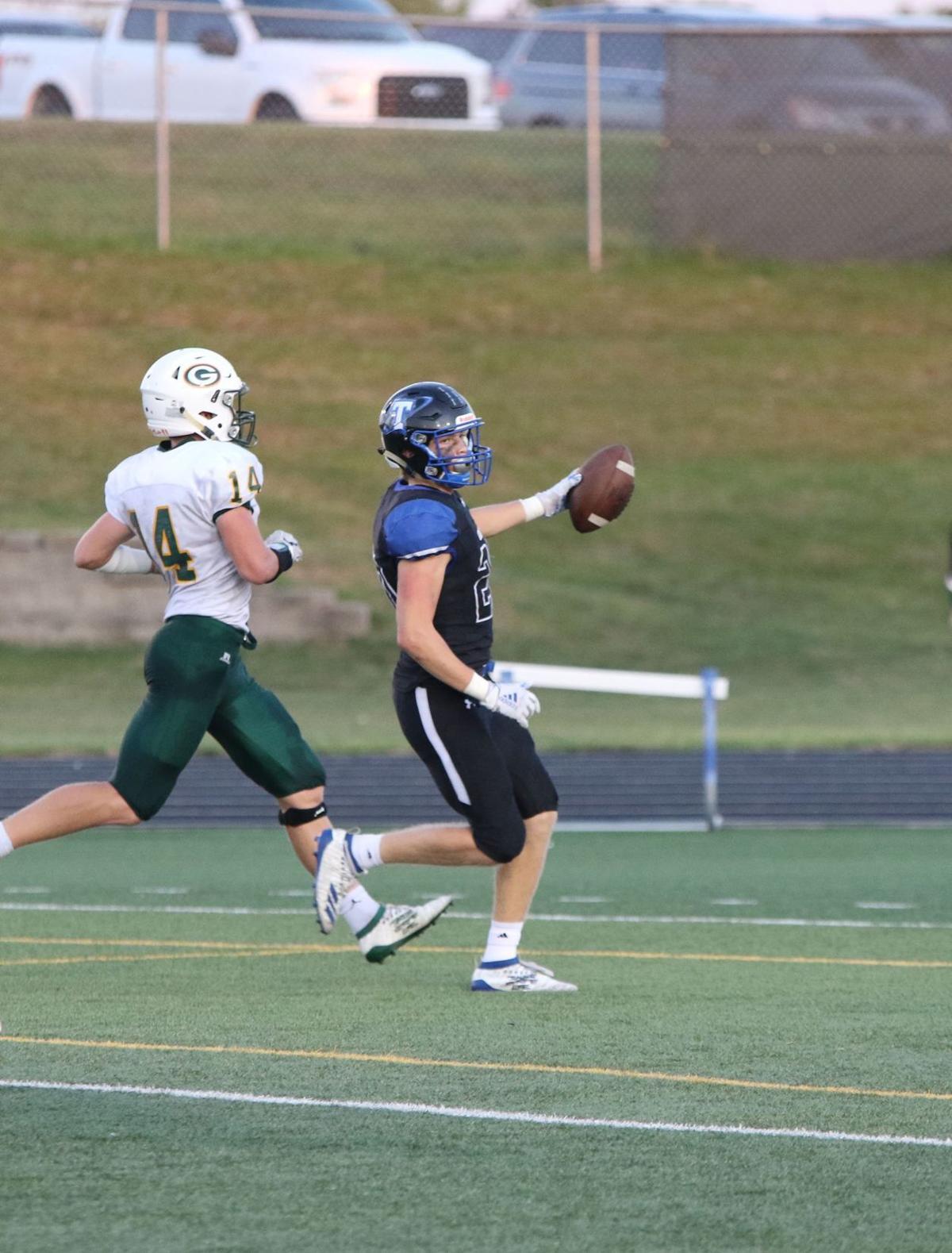 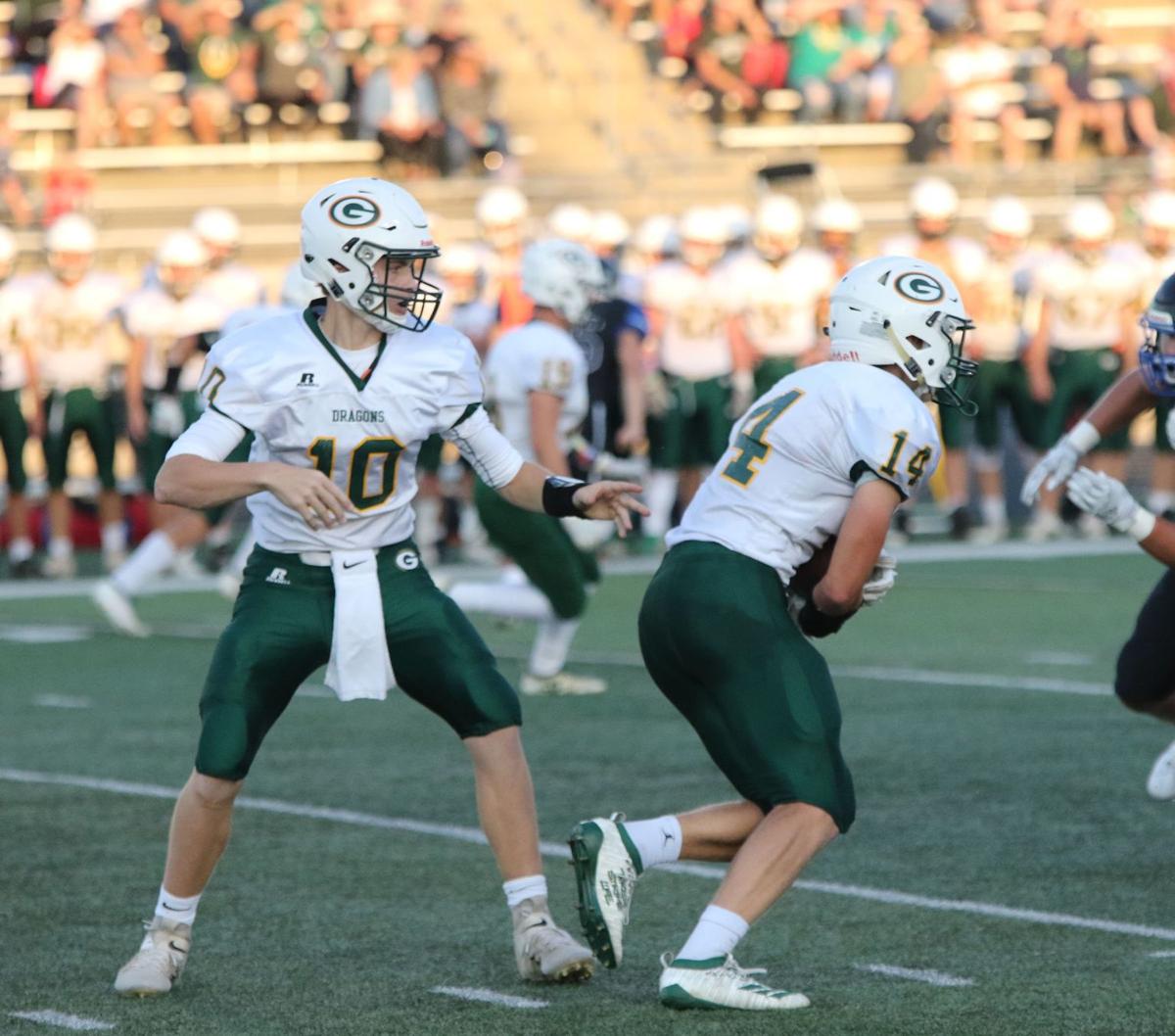 Gretna quarterback Jamison Arkfeld hands the ball off to running back Trevor Marshall against Papio Sout at Foundation Field Friday.

Gretna quarterback Jamison Arkfeld hands the ball off to running back Trevor Marshall against Papio Sout at Foundation Field Friday.

Papio South head coach Tim Clemenger was pleased about the 74-yard touchdown pass from quarterback Connor Crandall to wide receiver Jackson Horn that put the Titans up 13-7. After this big play, The Titans never looked back and ended up taking the victory 24-7 over the Gretna Dragons.

“It gave us confidence and got our kids going and it was huge on the scoreboard and same thing confidence wise,” Clemenger said. “It was good for our kids.”

The Titans scored first, striking on the first possession with a one yard score from Dallas Rogers. Rogers also finished with 11 tackles. The extra point was no good so they took the lead 6-0.

The Dragons struck next late in the first quarter on a pass from Zane Flores to Coby Speer for a 29-yard touchdown. The extra point was good and Gretna took a 7-6 lead.

After some more punts and stalled drives, Crandall found Horn streaking down the sideline and hit him in stride for a 74-yard touchdown. Crandall finished 11-17 for 233 yards and a touchdown and Horn finished with two catches for 86 yards.

The third quarter went scoreless and the Titan defense was able to keep the Dragons offense at bay and hold the six point lead heading into the fourth. This was something Clemenger said they want to focus on.

The Titans were able to break this game open in the fourth quarter. After a long catch and run from Landon Jewell put them on the goaline, Nick Sich found the end zone to make it 21-7. The Gretna defense did a good job containing the talented senior running back throughout this one, as Sich had 20 rushes for 39 yards and a touchdown.

Gretna head coach Mike Kayl was happy with the improvement that the defense was able to make from week one to week two.

“We did a 180 as far as last week we weren’t real physical up front and we were a lot better up front and with our linebackers,” Kayl said.

Three interceptions by the Titan defense in the second half helped them keep the lead and keep Gretna at seven points throughout. Trenton Brehm, Cade Schendt and Zach Circle all got interceptions for Papio South. Zane Flores was picked off twice and Jamison Arkfeld got picked off once for the Dragons.

Trevor Marshall had 17 carries for 67 yards and Colby Scholl finished with thee catches for 33 yards for Gretna. For the Titans, tight end Will Swanson had four catches for 44 yards.

Papio South moves to 2-0 to start the season and Gretna falls to 0-2. Gretna plays Lincoln Pius X on Friday while Papio South heads to Bellevue West for a showdown with the No. 1 ranked team in the state.

When asked about preparation this week for the match up, coach Clemenger was short and sweet.

“Our kids will be ready.”