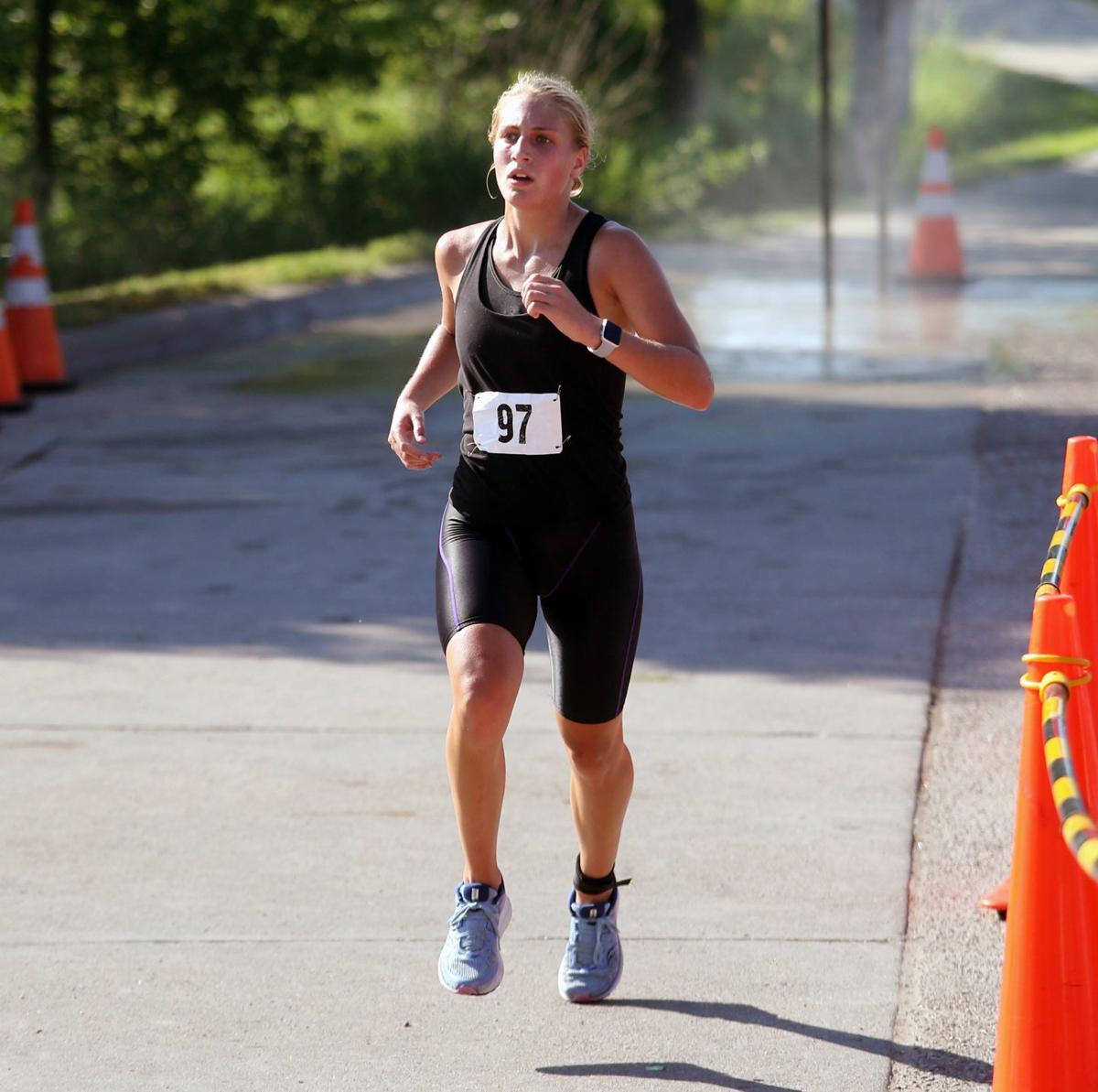 Jacqueline McCullough is steps away from finishing the City of Papillion Mayor’s Triathlon at Walnut Creek July 14. 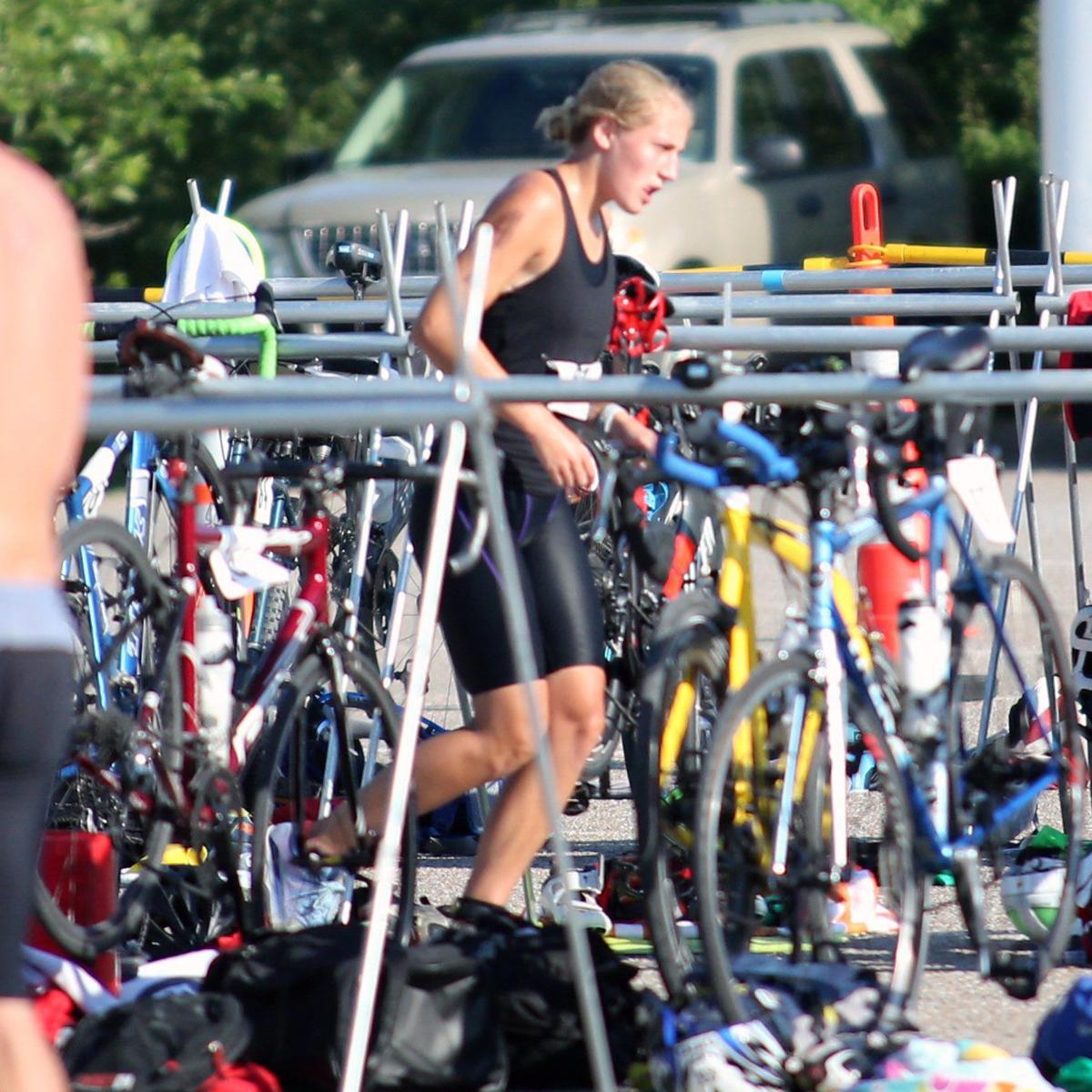 Jacqueline McCullough puts her bike on the rack and starts the 5k running portion in the City of Papillion Mayor’s Triathlon at Walnut Creek July 14.

Jacqueline McCullough is steps away from finishing the City of Papillion Mayor’s Triathlon at Walnut Creek July 14.

Jacqueline McCullough puts her bike on the rack and starts the 5k running portion in the City of Papillion Mayor’s Triathlon at Walnut Creek July 14.

A Platteview High School graduate and Papillion resident is taking the path less traveled as she takes her talents to the east coast for college.

After running track, cross country and swimming in high school, Jacqueline McCullough is heading to Northern Vermont University-Johnson to combine all her talents on the women’s triathlon team.

“The coach up there told me all about how she used to do triathlons and, at one point, she was all-American in Iron Man,” McCullough said. “I just thought that was amazing to know someone like that and I would love to be coached by her.”

It’s been a whirlwind three months for McCullough. The opportunity came into life in April when NVU-Johnson Head Coach Kim Loeffler emailed McCullough to gauge her interest.

“She looked at my sports results like swimming and running,” McCullough said. “She said I would be a perfect fit for a triathlon and I never thought about doing a triathlon at all before.”

The surreal moment of realizing a coach in the Northeast was keeping tabs on an athlete in the Midwest dawned on McCullough, so she made a trip to campus where the people and landscape made an impression on her.

“I’d probably say the people. They were all so nice and really welcoming,” McCullough said. “I also loved the scenery. It was so awesome and I decided that I am going to go.”

Following her visit in May, McCullough committed on June 12. She will also compete on the track and field team for the Badgers.

“I felt like I had to go do it. She paid for my plane ticket and I went out there. I spent two days out there with my mom and Nana,” McCullough said. “I think it’s going to be fun.”

According to the NVU-Johnson press release about McCullough’s signing, she was a ‘priority’ for Loeffler and is the Badgers’ first triathlon commit for the 2019 class.

“Jacqueline is an accomplished swimmer and runner and will be a tremendous asset to our team,” Loeffler said in the press release. “I look forward to developing her triathlon skills as we raise the bar in 2019.”

The NVU-Johnson Women’s Triathlon team is entering its second year as a program.

For the past month, McCullough has been training for her upcoming future. She recently bought a bike and is adjusting to all the different gears on the bike saying, “it’s the hardest part” so far.

The triathlon includes swimming and running along with biking.

“I’ve been working really hard on the bike because it’s my weakness. With the running, it’s either you go long distances or work on sprinting mechanics,” McCullough said. “With swimming, she sent me the workout and I didn’t even know some of the things she’s talking about. It was so technical, so it’s been a little scary.”

Along with training, McCullough competed in the City of Papillion Mayor’s Triathlon at Walnut Creek July 14. The event included a 500-meter swim, 13-mile bike and a 3.1-mile run.

“It was very scary, but once the gun shot off, I didn’t feel anything,” McCullough said. “I learned I can improve on a lot more stuff to get my time down to where I want it to be this season.”

She finished 23rd out of the women and 90th place overall in her first-ever triathlon, while being the third-youngest participant.

Having competed in swimming and running in high school, McCullough has some experience, but the transition on the bike has taken time. The 13-mile bike was after the swim and before the running portion.

“I was happy about my swimming because I thought it would be a lot worse than it was. I was not happy about biking. I was not good at hills at all and it slowed me down,” McCullough said. “If I can get the biking down, I feel like my time will go down easily. Then when I started running, I was just so tired at the end.

“I liked the experience, but I hated the pain of the bike and that’s really all I hated about it was the bike.”

The whole experience of a triathlon isn’t the first time McCullough has tried new things. For the past three years, she’s been a Springfield Volunteer Fire Department cadet. Before deciding to head to NVU-Johnson, she had plans to study fire science at Metro Community College.

“I just wanted a job in my future that I do something new every day and I like helping people,” McCullough said. “I’m not a very talkative person, so I felt like that would be an awesome job for me.”

During her visit, she asked about potential of continuing that passion and found out there is a cadet service located near the university.

“I love it, so I’m probably going to continue that up there,” McCullough said.

In less than a month, McCullough will make the 20-hour trek to Johnson, Vermont, to start her new path in life with triathlon events starting in September and track and field in April.

She will be able to come home every five weeks unless she has a meet, so she’s become more comfortable with the idea of being far away from family and friends.

Right now, she’s just riding the advice her mom has always given.

“I’m a little scared about how far away it is and I hope I make new friends. I think it will be easy since I will be on a team. I’ve warmed up to it a little bit,” McCullough said. “She always says, ‘Do stuff that scares you because it makes you stronger.’ So I’m just taking it on.”