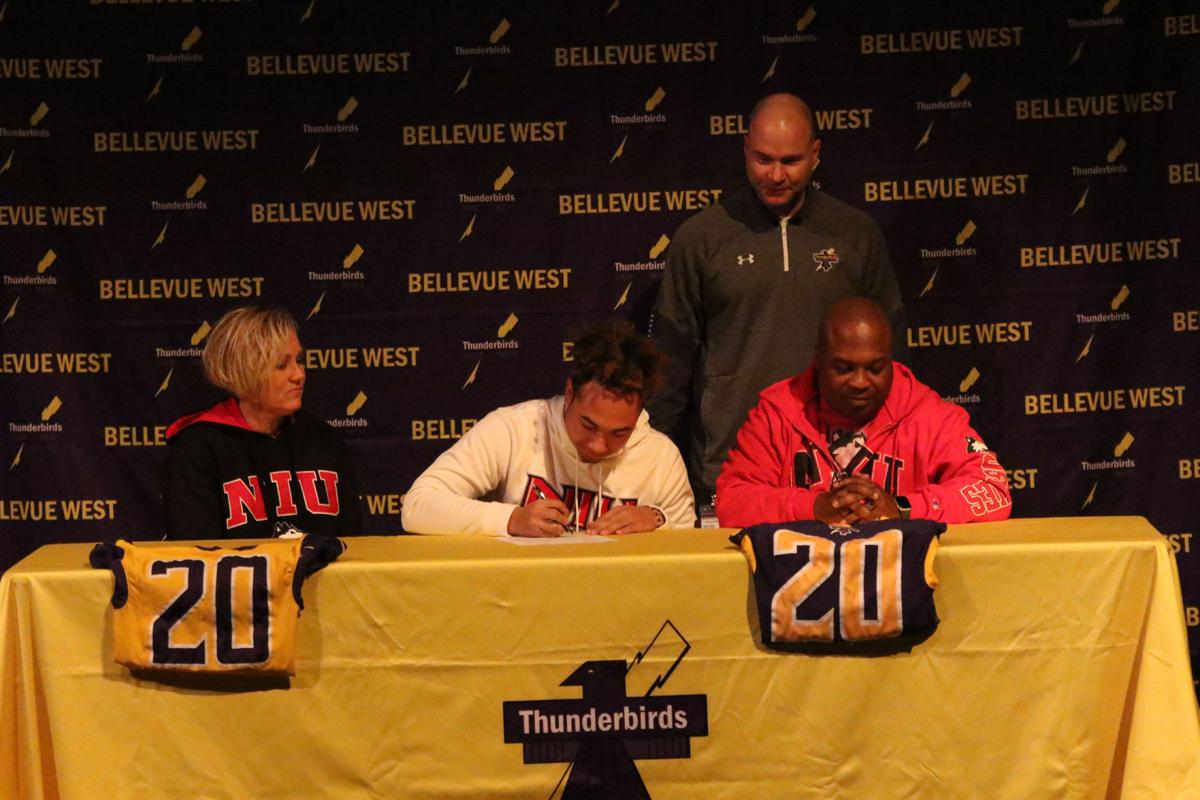 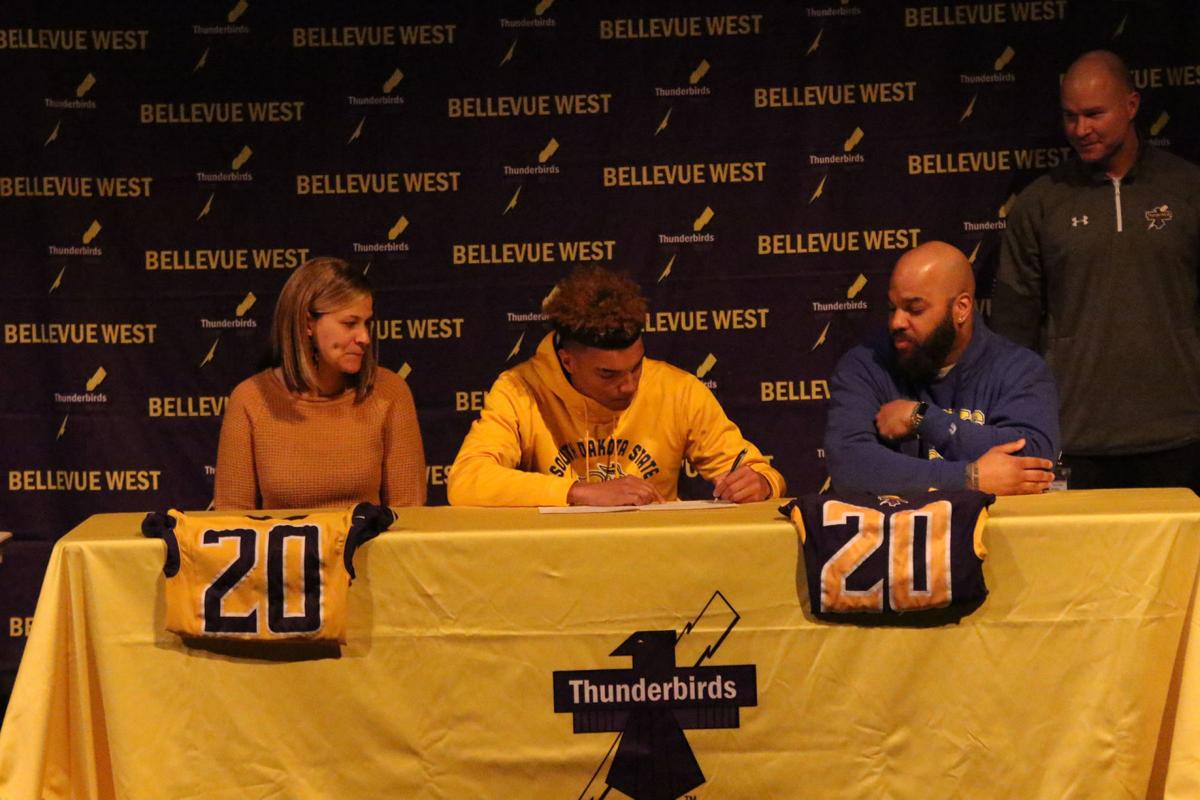 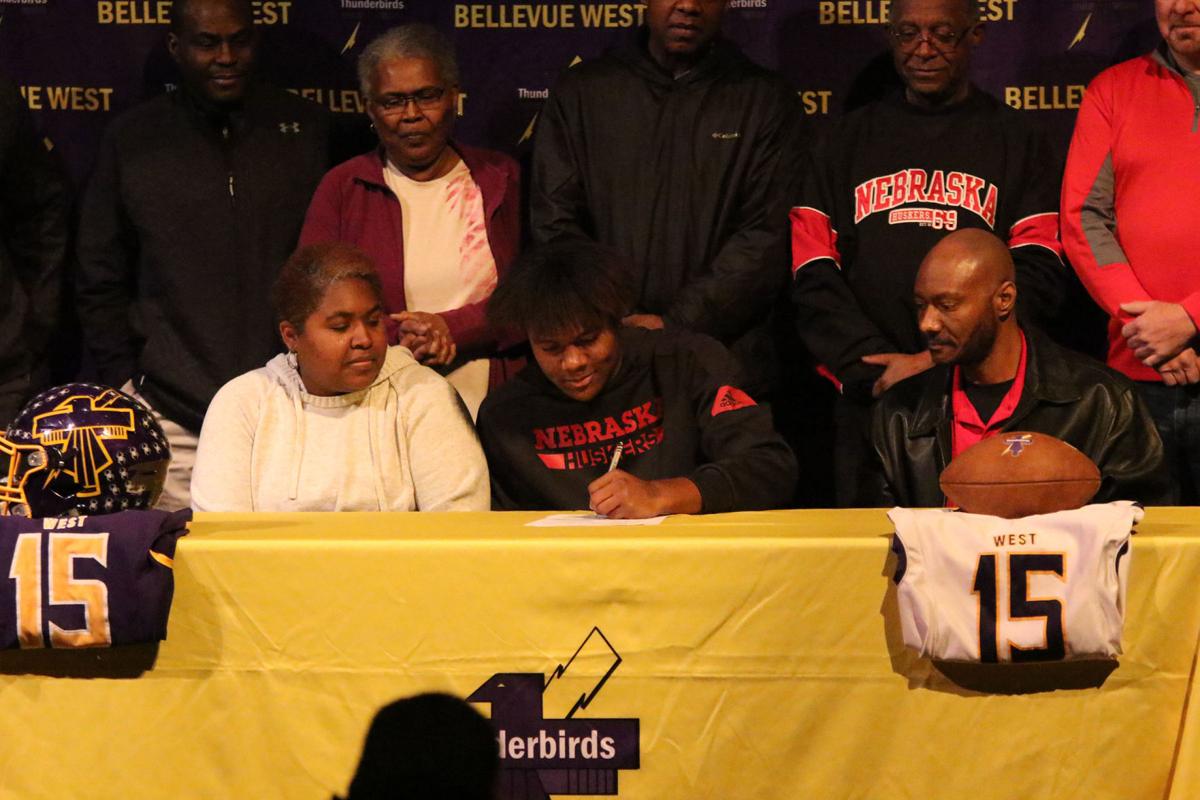 Bellevue West standout Zavier Betts signs his letter of intent to play college football at the University of Nebraska in front of family and friends.

Bellevue West standout Zavier Betts signs his letter of intent to play college football at the University of Nebraska in front of family and friends.

The early signing period for high school football players is today and four ITG athletes have put pen to paper with Division one football schools for their next four years.

Will Swanson from Papillion-La Vista South, Paxton Swanson from Platteview and Jay Ducker and Nate Sullivan Jr. from Bellevue West all signed their national letters of intent to join their respective universities.

Swanson will be headed to Kansas State, Sullivan to South Dakota State and Ducker to Northern Illinois.

Ducker solidified himself as the top player in the state this season, rushing for 2,100 yards on 215 carries and 39 touchdowns. He added 315 yards and six touchdowns receiving. He ran for 9.8 yards per carry and over 12 yards per reception.

Sullivan missed some time this season due to an off season injury, but he was still able to catch the ball 27 times for 327 yards and two touchdowns. He also averaged over 12 yards per reception. Coach Mike Huffman was very complementary of Sullivan and his determination to return from his injury this season.

Papio South tight end Will Swanson was one the more impressive tight ends in the state this past season. His ability to possess the football and block are enticing for a school like Kansas state.

The 6'5 tight end finished with 33 catches for 381 yards and three touchdowns. His 11.5 yards per catch and 42.3 yards per game led Class A for all tight ends. He recorded 21 pancake blocks in his nine games. He did miss one game due to injury.

Paxton Swanson is a Platteview offensive linemen who is heading to the University of South Dakota. Similar to South Dakota State, the Coyotes compete in the Missouri Valley Conference.

Swanson was a dominant force on the offensive line this year for the Trojans, recording 54 pancake blocks and was a key part of the Trojans dynamic and explosive rushing attack this season.

On Friday, Bellevue West stand out Zavier Betts signed his letter of intent to play his college football at the University of Nebraska-Lincoln.

Betts was given the go ahead to sign on Thursday and held a ceremony at the school to officially put his name on paper Friday morning.

Betts career at Bellevue West was nothing short of spectacular, as he finished with a Class A state record of 46 career receiving touchdowns. He recorded 189 catches for 3,330 yards for an average of 17.6 yards per catch and 72.4 yards per game.

In his senior season, Betts finished with 64 catches for 1,185 yards and 17 touchdowns. He averaged 18.5 yards per catch and 91 yards per game. He was also apart of two Bellevue West Class A state championships.