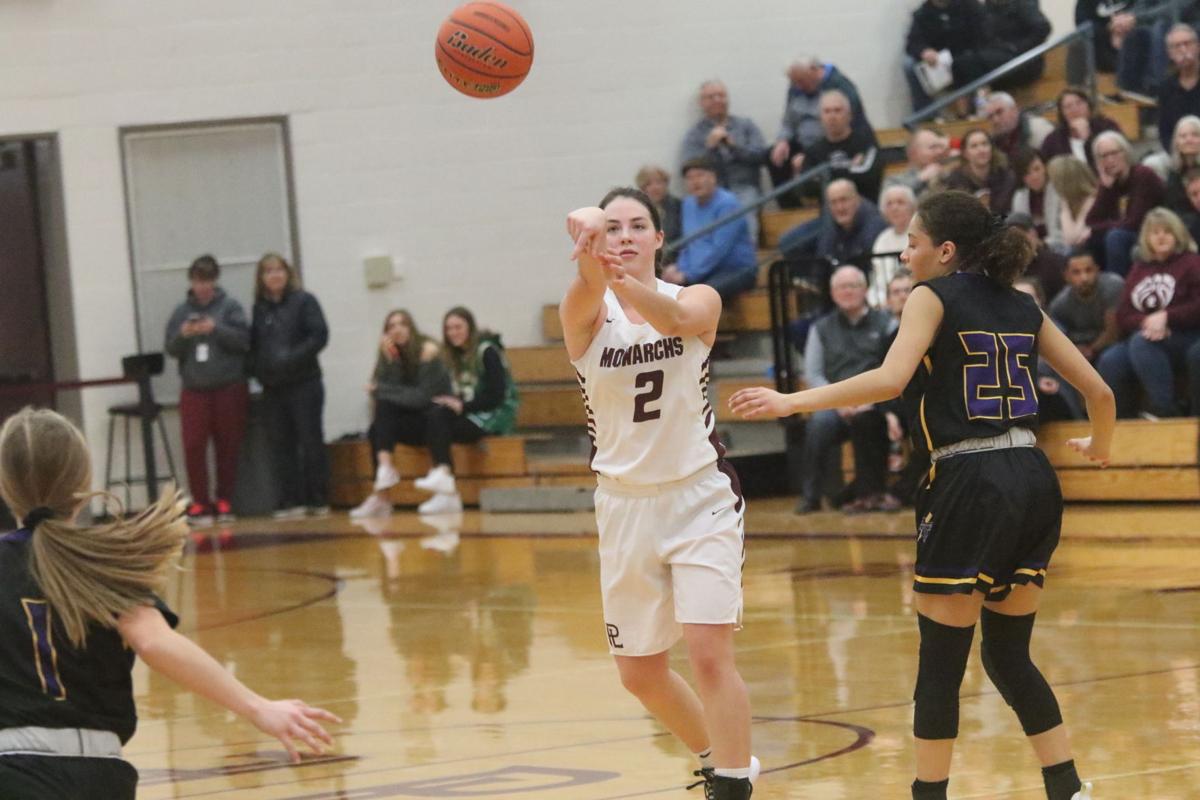 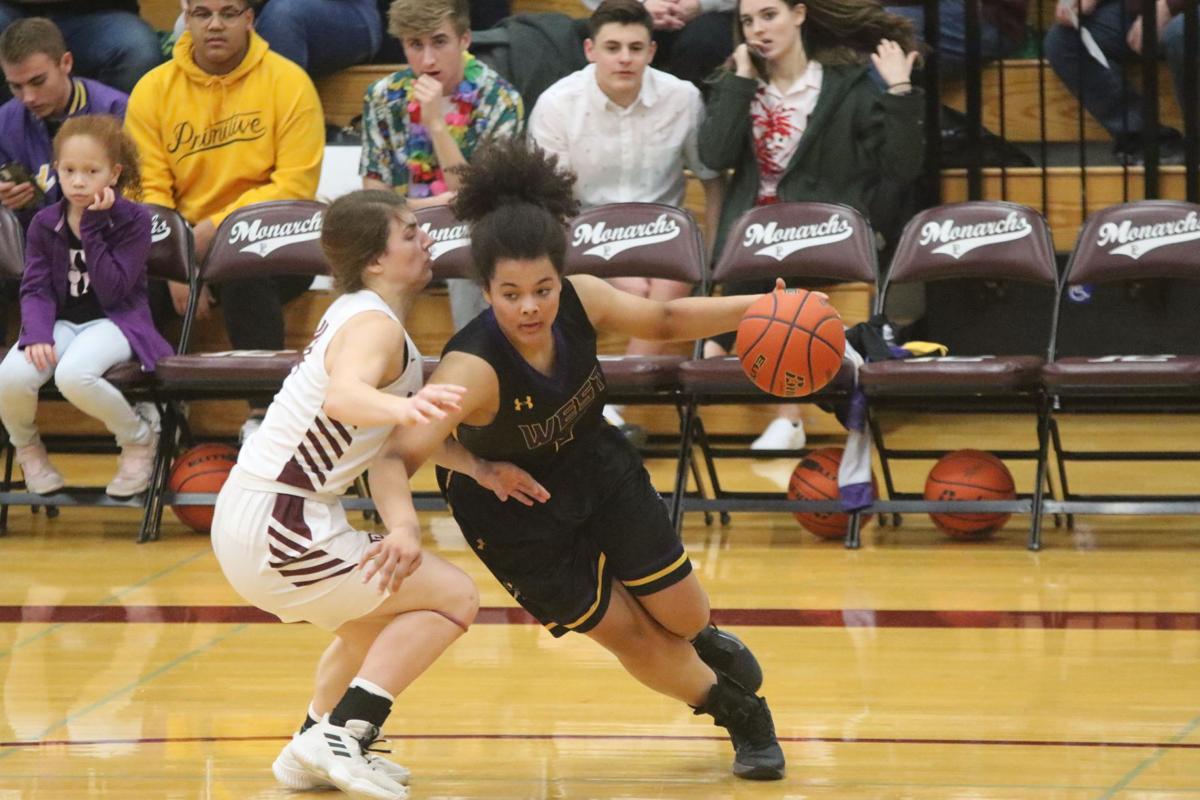 The No. 6 ranked Papillion-La Vista Monarchs improved to 17-2 on the season after holding off Bellevue West 58-52 on Friday night.

The Monarchs got out to a quick 5-2 lead after a pair of Lindsey Ingwerson free throws. Bellevue West did a good job in the first quarter of thwarting the Monarchs runs and keeping the game close.

Olivia Boudreau had a great opening half, getting her hands in the Thunderbirds’ passing lanes and creating multiple fast break opportunities for the Monarchs to capitalize on.

In the second quarter, the Monarchs were able to create some separation, going up 30-20 and leading 32-20 at the half.

“I thought we ran the floor a little bit better,” Papio head coach Josh Siske said about the second quarter. “That was the biggest thing and then we got stops and some rebounds. I thought in the third quarter and definitely in the fourth quarter we stopped rebounding and gave them too many second chance opportunities.

“In the second quarter we got stops and rebounds and we always tell them that we are tough when you get in transition and that starts with a stop and a rebound.”

The Monarch defense were able to lock up in the second quarter, holding the Thunderbirds to just seven points.

Bellevue West scored first in the second half, cutting the Monarch lead to eight.

The Monarchs were able to push the lead to 35-23 and then 41-28 after a Boudreau three-pointer and a Brooklyn Wrice bucket and foul.

Emma Chrisman cut into the Monarch lead with a pair of free throws to make the score 41-30 Papio with 3:34 left in the third quarter.

The Monarchs continued to crash the offensive glass, creating multiple second chance opportunities as they have done so well all season.

Taryn Wharton knocked down a three-pointer for West, making the score 41-33.

Chrisman then knocked down a three-pointer for West to make the score 41-36 with West being on an 8-0 run.

Boudreau tacked on two more to her scoring total to push the Papio lead to seven and break into the West scoring run.

Then as if on cue, Boudreau knocked down a three-pointer from the corner to push the Monarch lead back to ten.

Jenna Hoelscher knocked down a three-pointer in the corner to make the score 51-40 Monarchs after the Thunderbirds got four straight points.

The Thunderbirds then went on a 7-0 run to make the score 51-47 and jolt life back into the team with 3:40 left in the game. Papio answered with a basket to push the lead back out to six.

Chrisman then knocked down a three-pointer and the Thunderbirds got a steal on the other end.

Maggie Vasa converted an and-one for Papio with a minute and a half left to make the score 57-50 Monarchs. Papio would then use the clock on offense and make stops on defense to hang on for a 58-52 victory.

Boudreau finished with 25 points in what Siske considered one of her most impressive performances.

“Tonight, I was so impressed with how she drove it and drew contact,” Siske said. “That is something we have talked about all year and getting to the free throw line, but she is just such a smart player.

“She just understands the game so well and reads passes from the other team so well. It’s just nice to have a kid like that. She can be that calming force for the team.”

Wharton led the way for Bellevue West, recording 14 points and knocking down multiple key shots for the Thunderbirds that kept them in the game.

The Monarchs have great chemistry and that will be key moving forwards for them.

“That is what we talk a lot about,” Siske said. “I don’t know if we are the most talented team in the state and where we are in that respect, but we try to talk about being an all star in your role, whatever that is. A lot of our kids have done a great job of buying into that.

“When you get into February, the season is long, and everyone knows each other. There are no surprises anymore, so you know it is going to be a battle.”

Coach Siske added “close games are what it’s about now.”

• Bellevue West 73, Omaha North 42 — The Thunderbirds got down to business as they built a double-digit lead before the end of the first quarter. By halftime the T-Birds were up 20 and then cruised to victory.

• Lincoln East 60, Papillion-La Vista 52 — After going into the fourth quarter with a six point lead, the Monarchs went cold in the fourth and scored just eight points compared to the Spartans’ 22 points.

• Lincoln North Star 66, Bellevue West 58 — A strong second half helped the Navigators defeat the Thunderbirds. Though the game was tied heading into the fourth quarter, North Star outscored West 21-13 to earn the road win on Saturday afternoon.