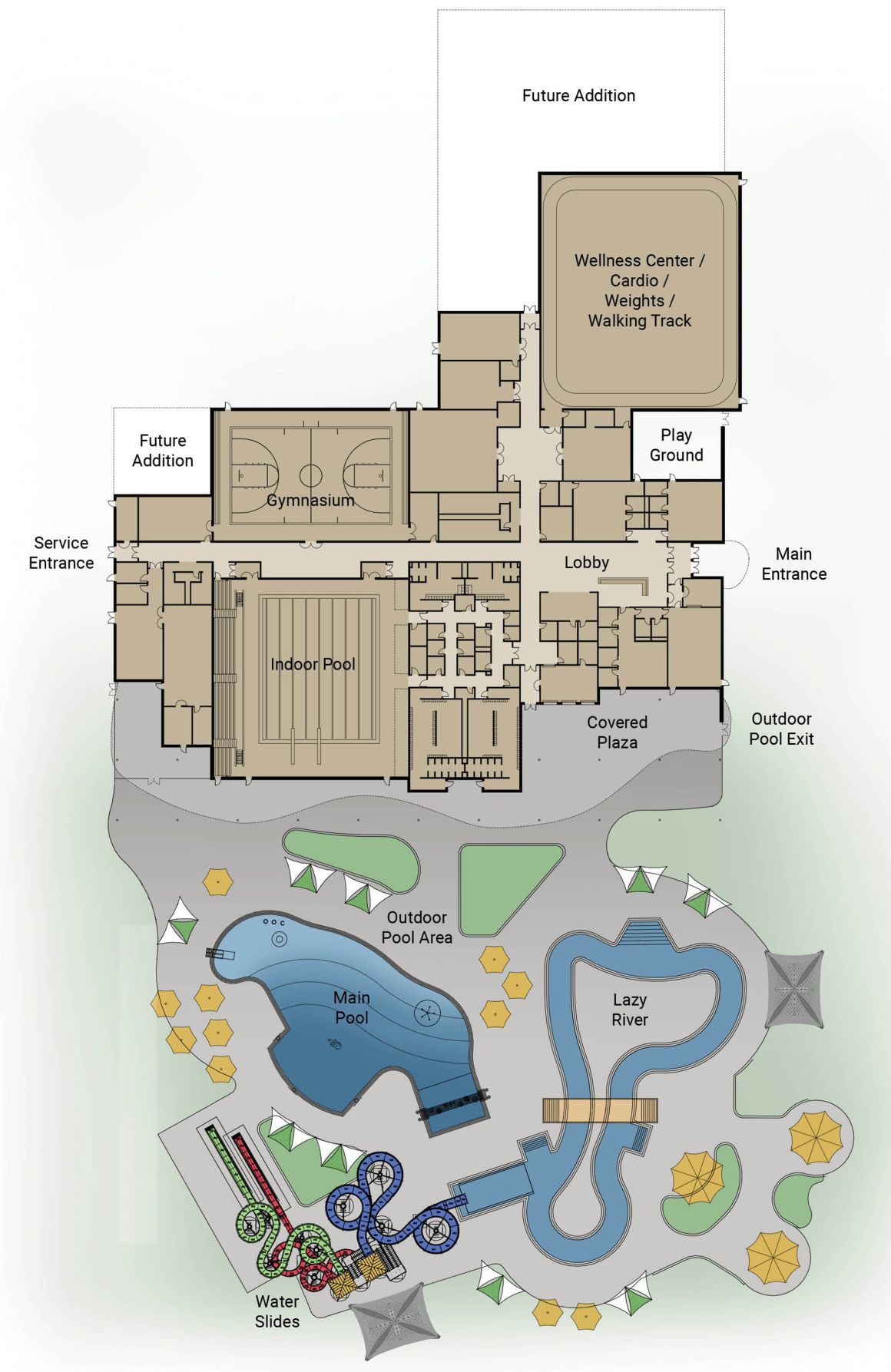 A floor plan for the indoor recreation center and outdoor pool area proposed for the Fields at Gretna. 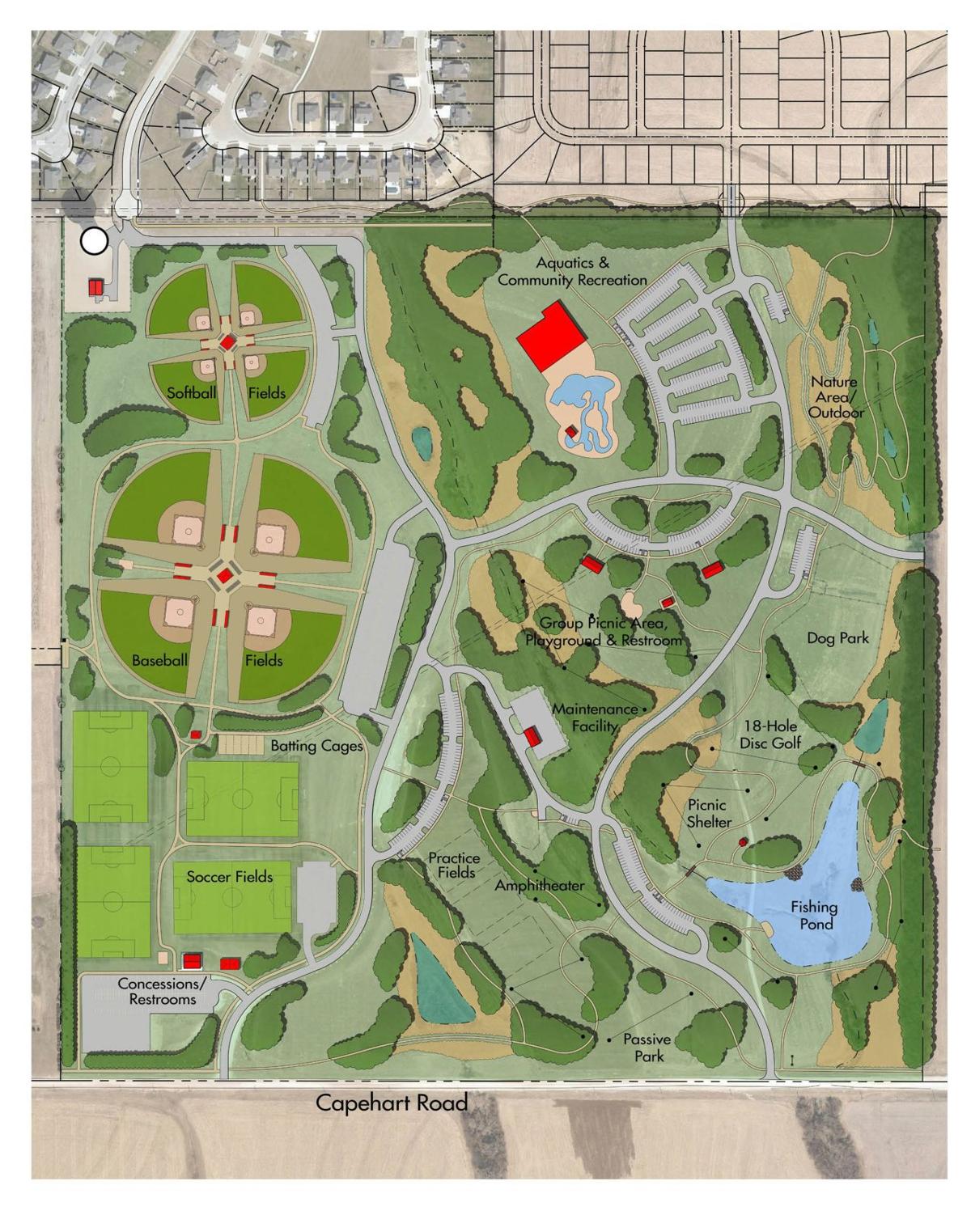 The master plan for the eastern half of the Fields at Gretna. 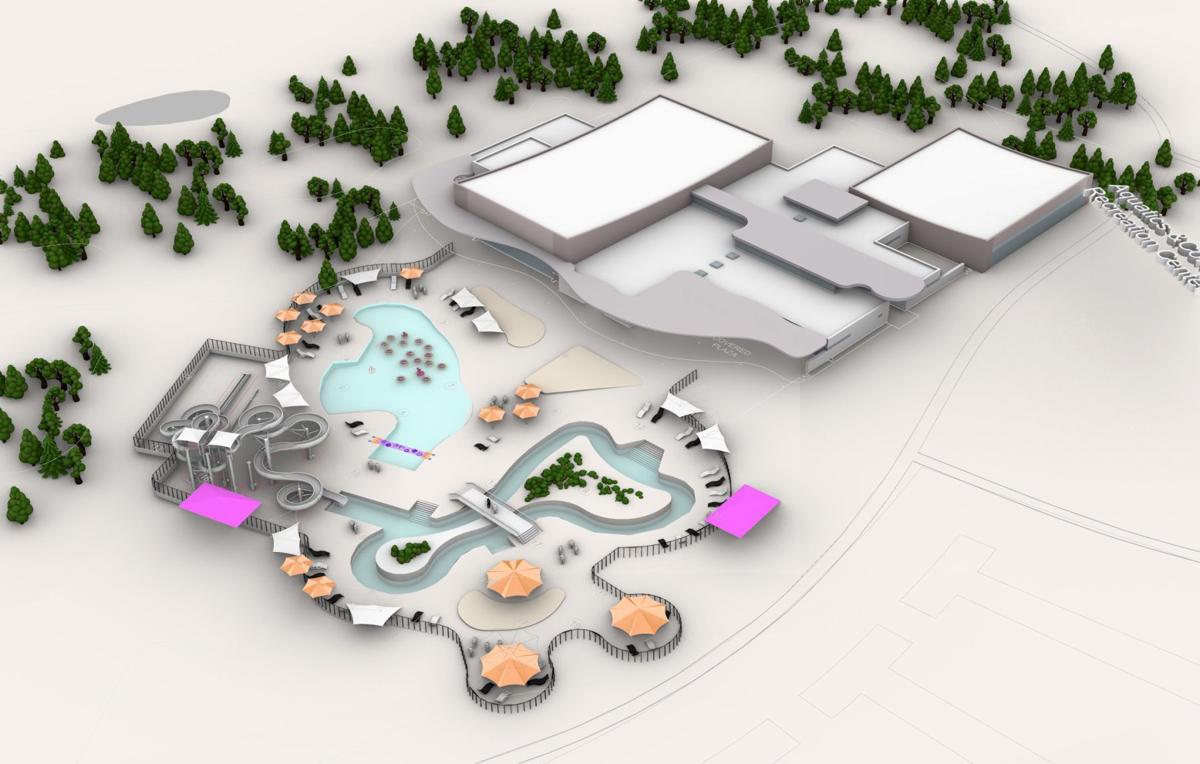 The initial aerial rendering of the aquatics and community recreation facility at the Fields at Gretna. This rendering is in the early stages and mainly serves as a basic preliminary massing study.

A floor plan for the indoor recreation center and outdoor pool area proposed for the Fields at Gretna.

The master plan for the eastern half of the Fields at Gretna.

The initial aerial rendering of the aquatics and community recreation facility at the Fields at Gretna. This rendering is in the early stages and mainly serves as a basic preliminary massing study.

Over the summer, Jon Galles hated the afternoons he would have to turn children away. With pool capacity maxing out on the summer’s hottest days, the need to replace Gretna’s deteriorating and dated municipal pool became increasingly apparent.

Pool-related concerns weren’t new to Galles, a lifeguard at the pool and Gretna High School sophomore who spends his winters as a member of the GHS swim team. He and fellow swim team members like Kalvin Hahn, a freshman, had become accustomed to waking up at 4 a.m. in hopes of getting a few laps of practice in before the school day started.

Aware of these growing concerns, the City of Gretna and Gretna Public Schools came together in a joint effort to satisfy those needs.

After the city revealed its park plans for the eastern portion of the Fields at Gretna property in late February, the city got to work exploring funding options and launched a subsequent study that focused on the construction of an aquatics center.

That plan, which encompasses an indoor and outdoor facility, was revealed Dec. 16 to a select group of stakeholders in a meeting held at the Gretna Public Schools administration building.

The outdoor facility — expected to house a zero entry pool, lazy river, three water slides and plenty of shading and seating areas — will be able to accommodate about 1,750 people. Of that, 1,110 pertains to the actual pools, compared to the capacity of 264 people at the current Gretna Municipal Pool.

“We have a lot of families here in Gretna and we want to make sure they all have something to do,” said Lauren Liebentritt, chair of the city’s Park Advisory Committee.

The outdoor facility will connect to a covered plaza coming out of the building, through which patrons will also have access to the indoor eight-lane competition pool.

With the outdoor facility’s pool depth planned to max out around five feet, the indoor pool will reach a maximum depth of 12 feet and will cater to the needs of the Gretna High School swim team. That pool will feature diving boards and tiered bleacher seating for about 300 people, but will be open to the public when not being used by the school.

“The beauty of this is that it won’t be sitting there unused during the day,” said Rich Beran, Gretna Public Schools’ superintendent.

Members of the swim team are boarding buses at 4:45 a.m. and taking a 20-minute drive to practice before school on days that winter weather doesn’t prevent them from doing so.

“Right now, we don’t have a home pool so we can’t have any home meets,” Galles said.

“Right now, we’re just making due, but if we had this pool, not only would we have more space but we could grow our program,” said Kari Weihl, GHS swim coach.

Galles said an indoor space would also open up more time and space for swim lessons, which have to be canceled whenever weather concerns strike.

Along with the competition pool, the indoor recreation facility will include a gymnasium, concessions, locker rooms and plenty of space to exercise. A community room will be available for meetings and birthday parties.

“The key is really having flexible space,” said Pat Phelan of DLR Group, the school district’s engineer. “As programs change over time, this will allow us to change with them.”

Current proposals call for construction of a 68,000-square-foot facility. As time and needs progress, there is an additional 30,000 square feet of space dedicated for expansion.

The proposed aquatics center would be built on the Fields at Gretna property, owned by the city. The school district would assume joint ownership of the recreation and fitness facility, particularly the competition pool, through a long term lease with the city.

The city would manage the facility, as it does the current pool, and is exploring the possibility of some sort of agreement with the YMCA.

Proposed funding by the city would include a bond supported by a half-cent sales tax throughout Gretna, expected to be on the May ballot.

Alongside the aquatics facility and recreation center, the master plan for the eastern 80 acres of the Fields at Gretna includes space for trail systems, an outdoor classroom, a dog park, a playground and picnic shelters, an amphitheater, a fishing pond and an 18-hole disc golf course.

The plans aimed to complement the western portion of the park while recognizing areas surrounding the park that will eventually become residential developments.