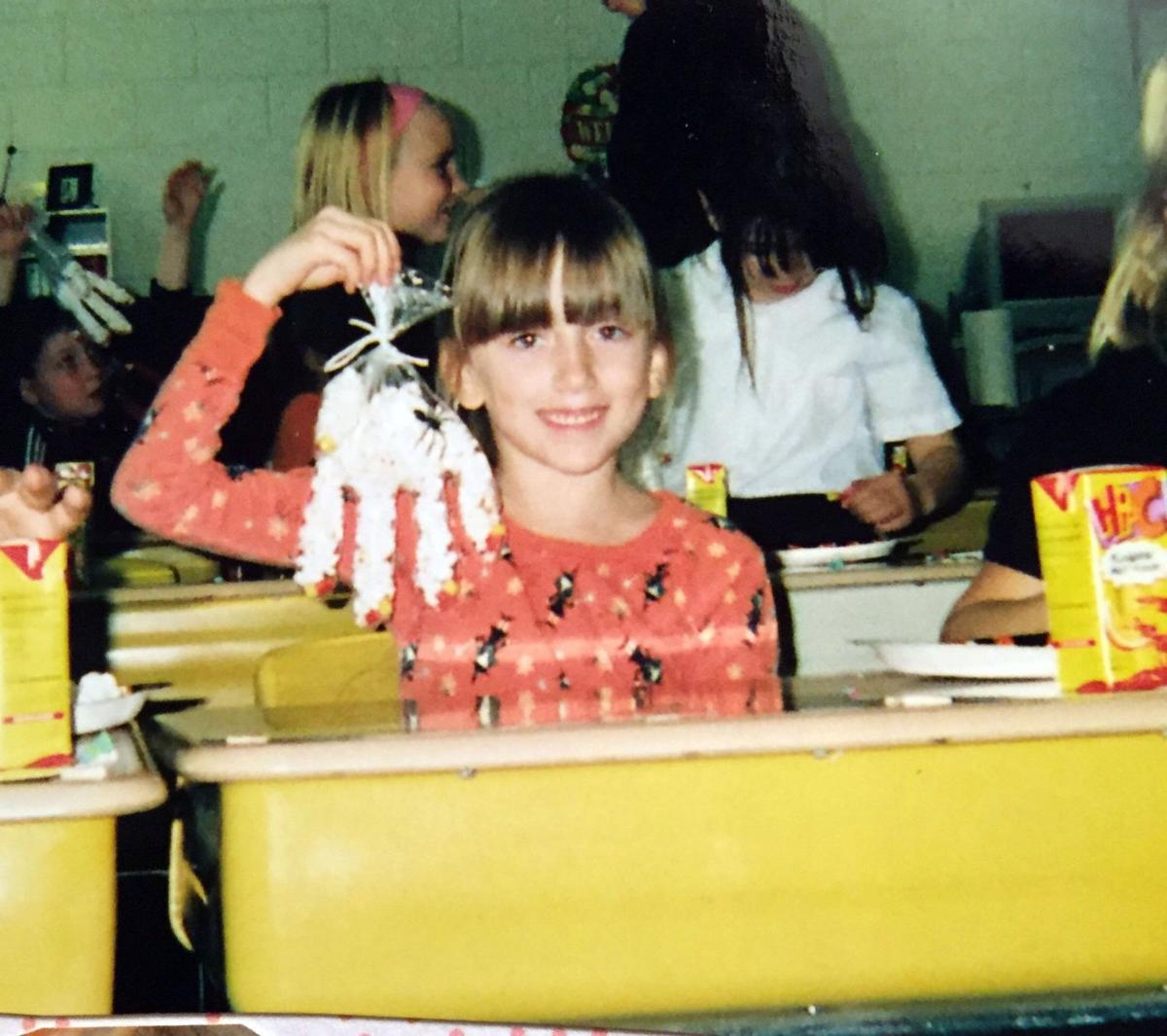 Lauren Traggiai, a teacher’s aid at St. Mary’s Catholic School, celebrates at a first grade Halloween party at the school. 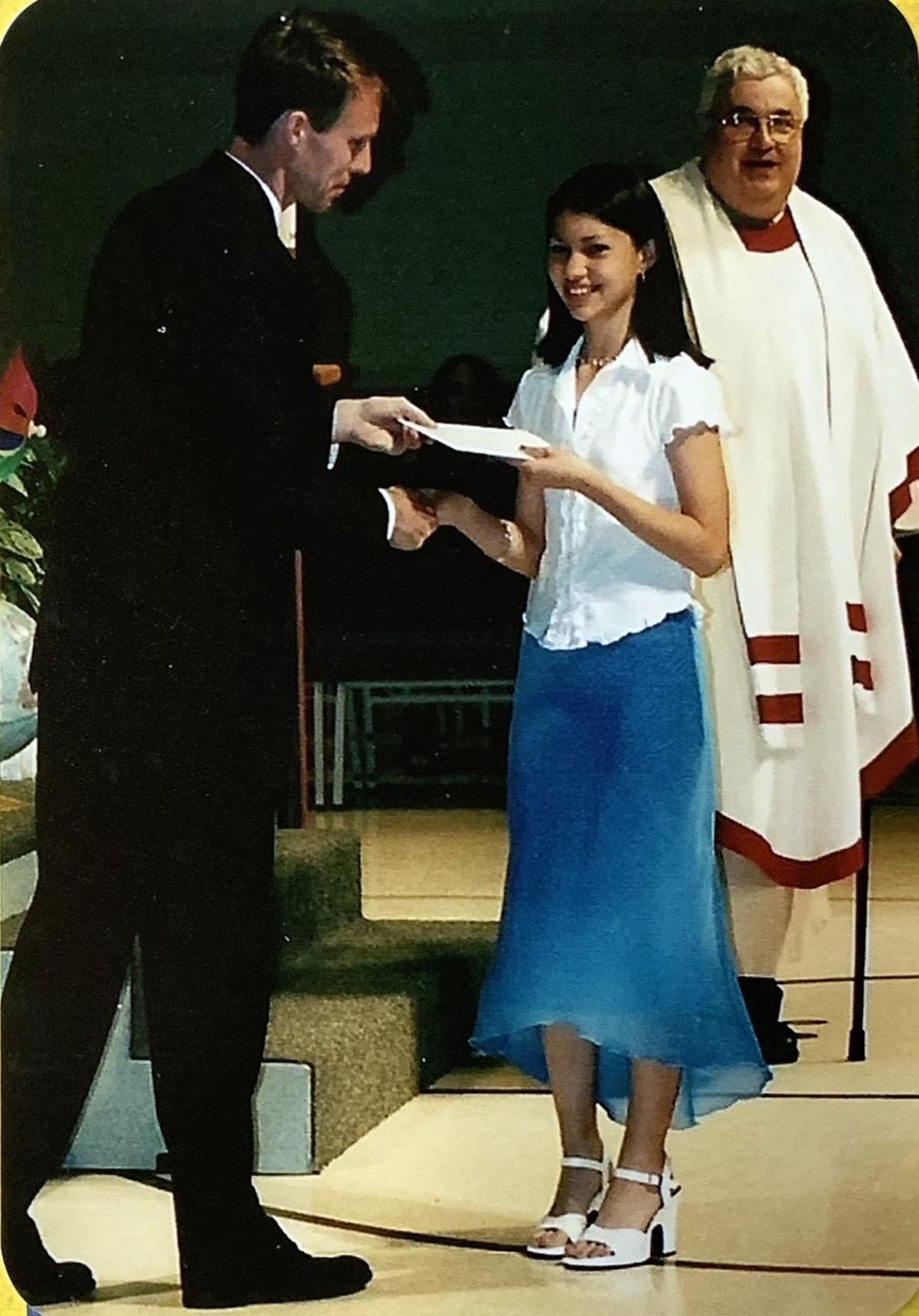 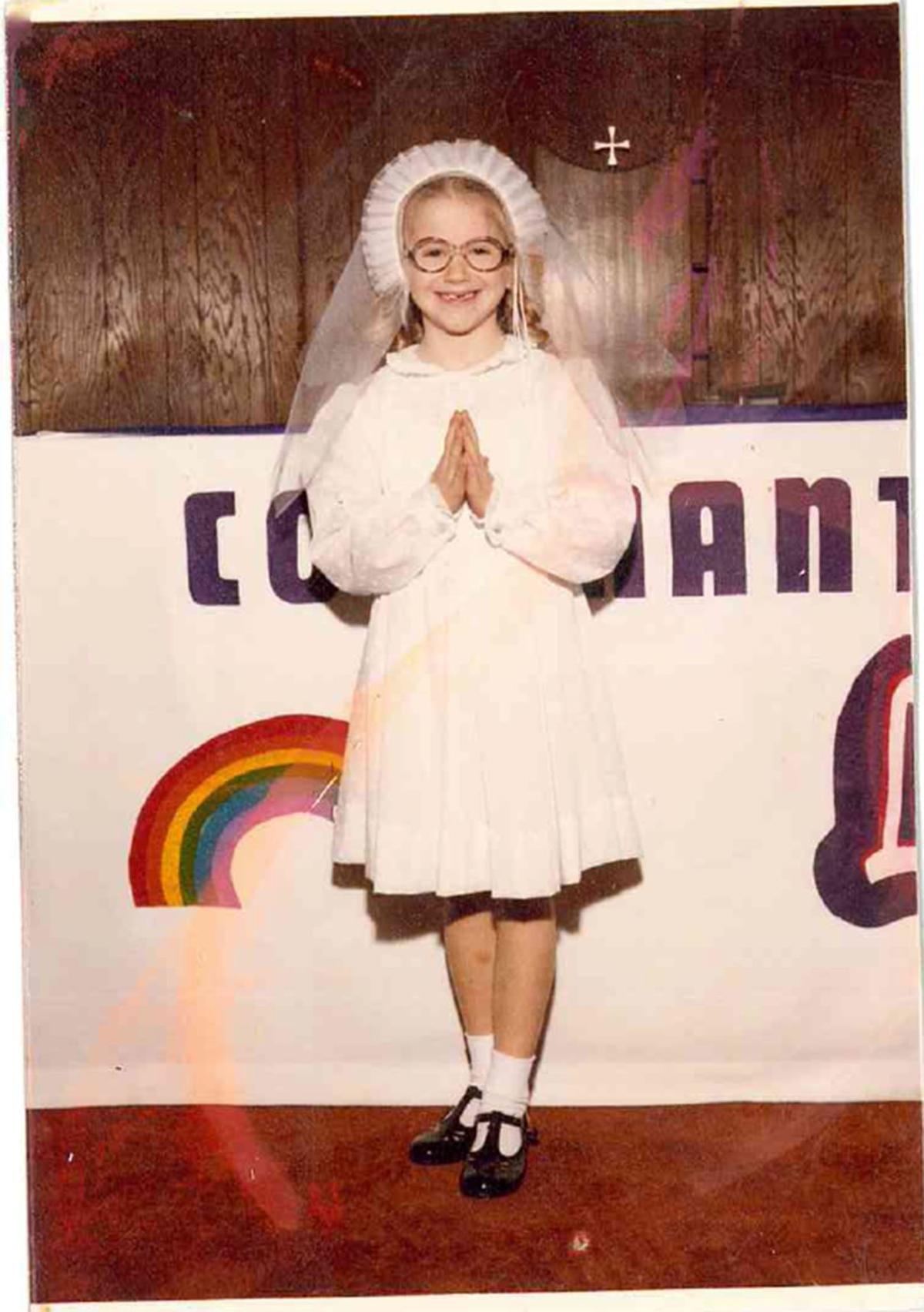 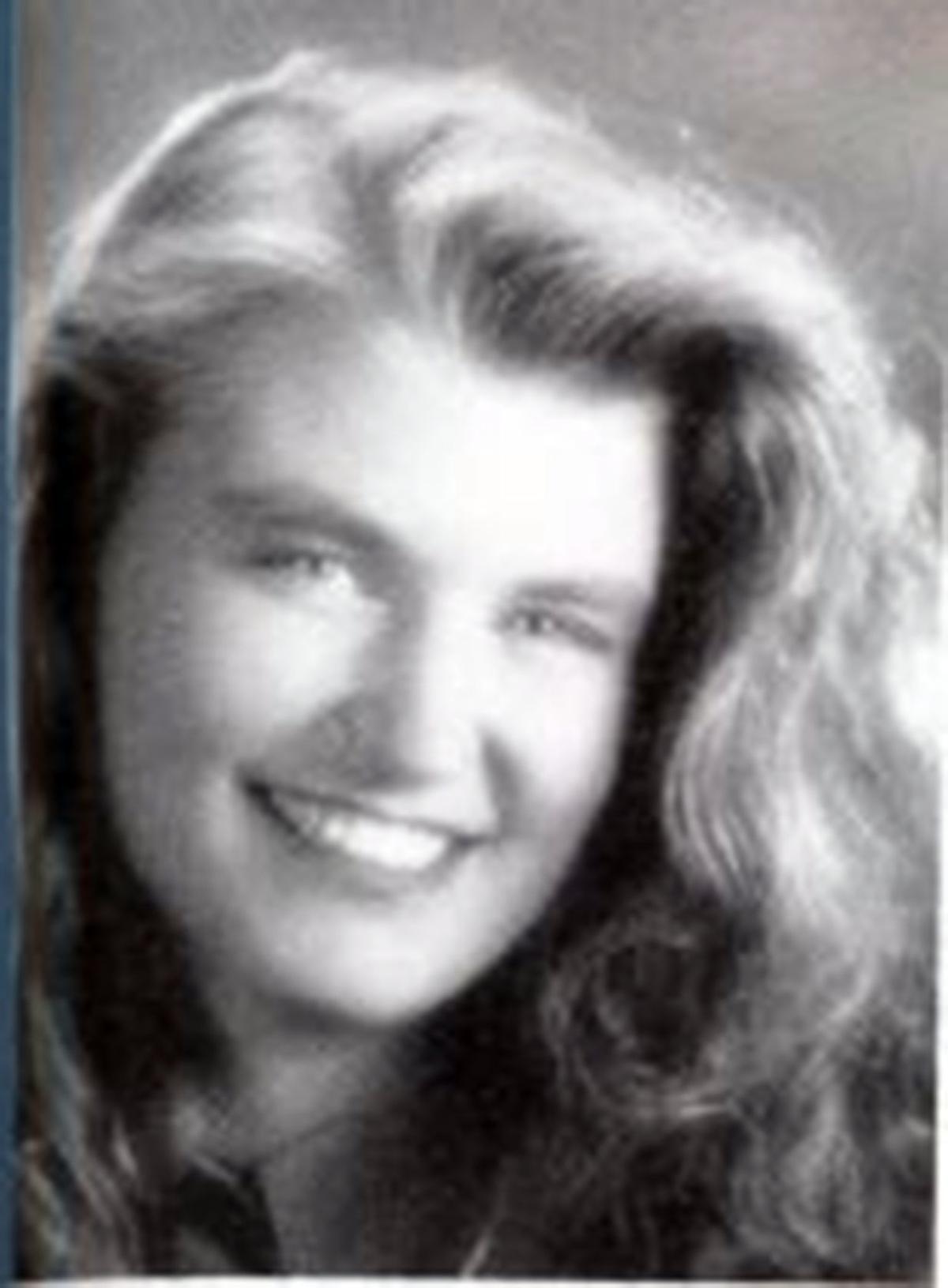 Lauren Traggiai, a teacher’s aid at St. Mary’s Catholic School, celebrates at a first grade Halloween party at the school.

Several Catholic school teachers have returned to their alma maters to teach in the schools they once walked in as students.

Celebrating Catholic Schools Week through Sunday, four teachers reflect on their times as students at the schools they now call work.

In order to practice her faith freely, second grade teacher Alyssa Gahl returned to St. Matthew the Evangelist School to teach and has committed to staying there ever since.

Gahl attended St. Matthew (then Cardinal Spellman) when she was 3 in 1990. She and her family moved after being stationed due to military, and then they came back in 1997 when she was in fourth grade back at St. Matthew.

Gahl said her experience as a student was great because of the familiarity of the St. Matthew community.

“I developed some really close relationships with the teachers and classmates, and my family and I were parishioners, so that helped carry over,” she said.

Before teaching at St. Matthew, Gahl worked as a special education teacher in the public schools setting for six years.

When a position opened up at St. Matthew, Gahl applied.

“For me, second grade to teaching the Sacraments to getting the students ready for First Reconciliation and First Communion, now I don’t want to teach anything else but second grade,” she said.

Some differences Gahl has seen since being a student is the church under construction, the gym facility and the changing classrooms.

“My classroom used to be the cafeteria and library, and we used to have Mass in here,” she said.

After three years teaching, Gahl said the community and the St. Matthew families will keep her there.

“It’s nice because it feels like home — it was many years ago but still feels like yesterday,” she said. “I always joke that this will be the job I retire from. I’m in for the long haul.”

A family of eight children attended St. Bernadette School, and one remains a Tiger as the second grade teacher.

Betsy Harding has worked at St. Bernadette for 21 years, and has even had her own children in her classes.

She attended St. Bernadette from 1980 to 1988 when she graduated. Harding also attended Gross Catholic High School.

“It’s like home,” she said of the school. “The teachers cared for us and I always felt safe and happy.”

Though Harding’s plan wasn’t to work at St. Bernadette after college, luck came to play when a job opened up.

“I went to the University of Nebraska at Omaha for college and I wasn’t sure what I wanted to do,” she said. “I was worried it would be weird being a teacher after being a student. But I applied, had a great interview and I came here and I enjoyed it.”

Harding originally started out teaching first grade, and then moved around different grades before settling to second grade.

Since being a student, Harding said one big change she’s seen is the student population.

Harding said her favorite part of teaching in a Catholic school is the faith-based education.

“The thread of faith runs through our school and it brings us together as a family,” she said. “This is my happy place and it’s a great place to be.”

One theology and social studies teacher at Gross Catholic High School has attended Catholic schools from grade school through college.

Kim Matzen, who is also the girls soccer coach, graduated from Gross in 1994 and returned in 2000 to start a 20-year teaching career.

At first, Matzen hadn’t planned on coming back to Gross, but decided to give it a shot when a position opened.

“I like the family atmosphere and connectivity we have,” Matzen said of the school.

Some memorable moments Matzen had from high school include her time spent playing sports and after-school activities.

“It’s a smaller school so you can do a lot of things and still be involved,” she said.

One thing Matzen enjoys about Gross is the Marianist tradition.

“Our focus on our Marianist heritage is more so now,” she said. “We are way more intentional about remembering our heritage and what the Marianists stand for.”

Society of Mary priests and brothers — Marianists — were the founding religious order of Gross Catholic.

Matzen said said celebrating Catholic schools has always been a priority to her.

“Faith is something that makes us stand out from other schools,” she said. “A lot of times, students that have been Catholic educated from kindergarten to now, they kind of take it for granted.

“Bringing awareness to the fact that it’s Catholic schools and we can be proud of our faith and share our faith with others, I enjoy that.”

Coming from a family of Spartans, teacher’s aid Lauren Traggiai knows the ins and outs of St. Mary’s School.

Traggiai attended St. Mary’s throughout eighth grade, graduating in 2013. Her mother was also a teacher’s aid at the school.

“As a student, she was around so that kind of made it more fun,” she said.

“I really enjoyed the school. I could tell when I went into high school how St. Mary’s helped prepare us for being ready for high school.”

Traggiai attended Mercy High School and will enroll at College of Saint Mary in the fall.

After graduating high school in 2017, Traggiai’s mother encouraged her to apply to be a teacher’s aid.

“I’ve always wanted to be a teacher, ever since I was young,” she said. “I was working down in the parish anyway, so I stayed at St. Mary’s since going here. So I interviewed the summer of 2017 and started my first year here.”

Traggiai mainly works with second graders, but has worked with other classrooms, as well.

Though Traggiai won’t be working at the school next year due to college, she said she’d like to stay and possibly student teach at some point.

Traggiai said her favorite thing about the school is her co-workers, some of which were her old teachers.

“It was kind of weird at first eating lunch with my old teachers, but they’re just so loving and second moms to me,” she said. “They’re great, and I love working with them.

Other than co-workers, Traggiai said she loves St. Mary’s students.

“I love them so much and they brighten up your whole day,” she said. “I could be having the worst day but then I come in and they want a hug or tell me about their weekend — it’s great.”