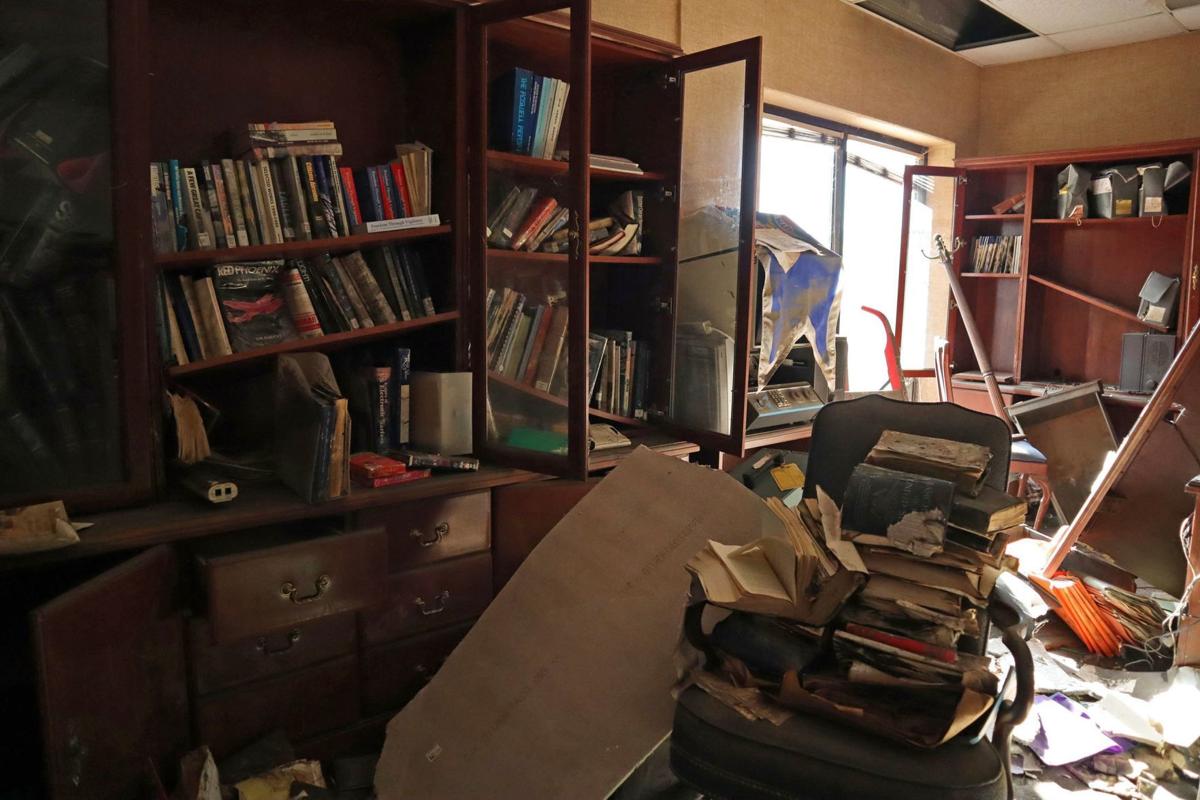 This office in the 55th Wing Headquarters Building was torn apart by the flood. Its ruined furniture, books and windows sat abandoned Dec. 4. 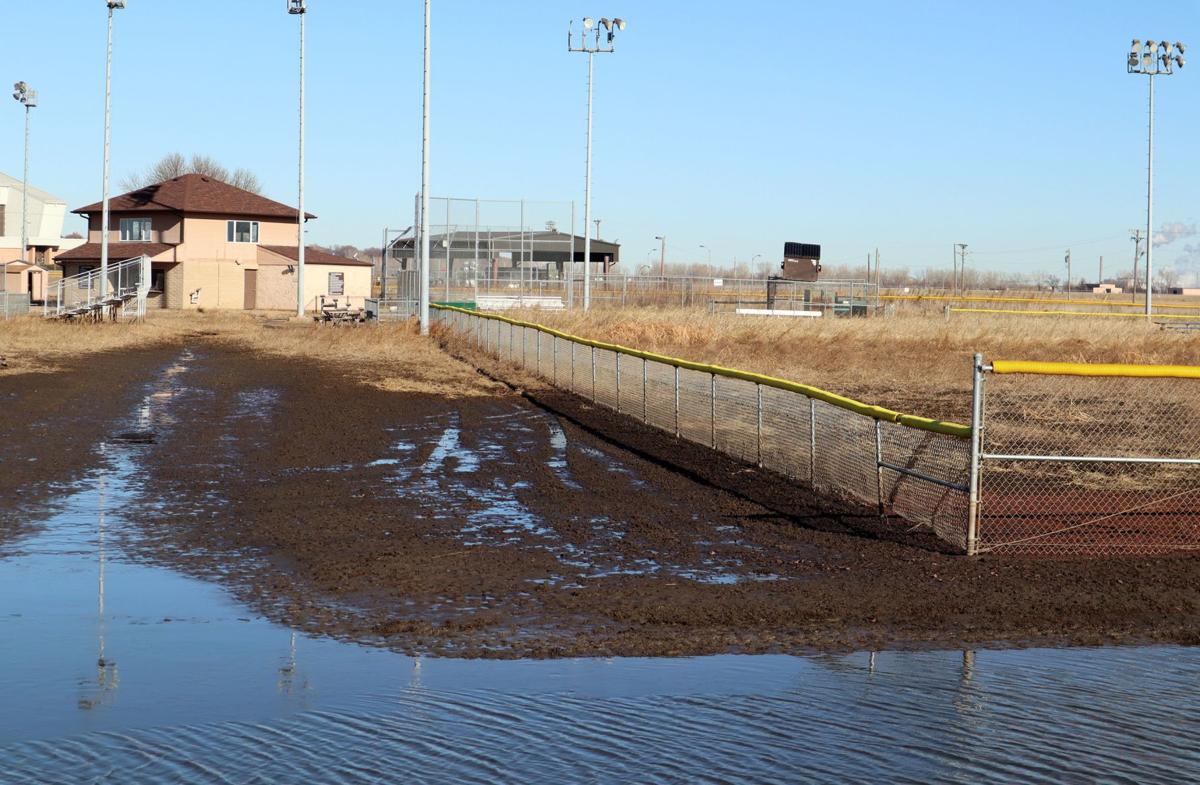 After floating through base on floodwater, this dumpster made its new home on top of Offutt’s softball complex fence. The water was 14 feet deep in this area. 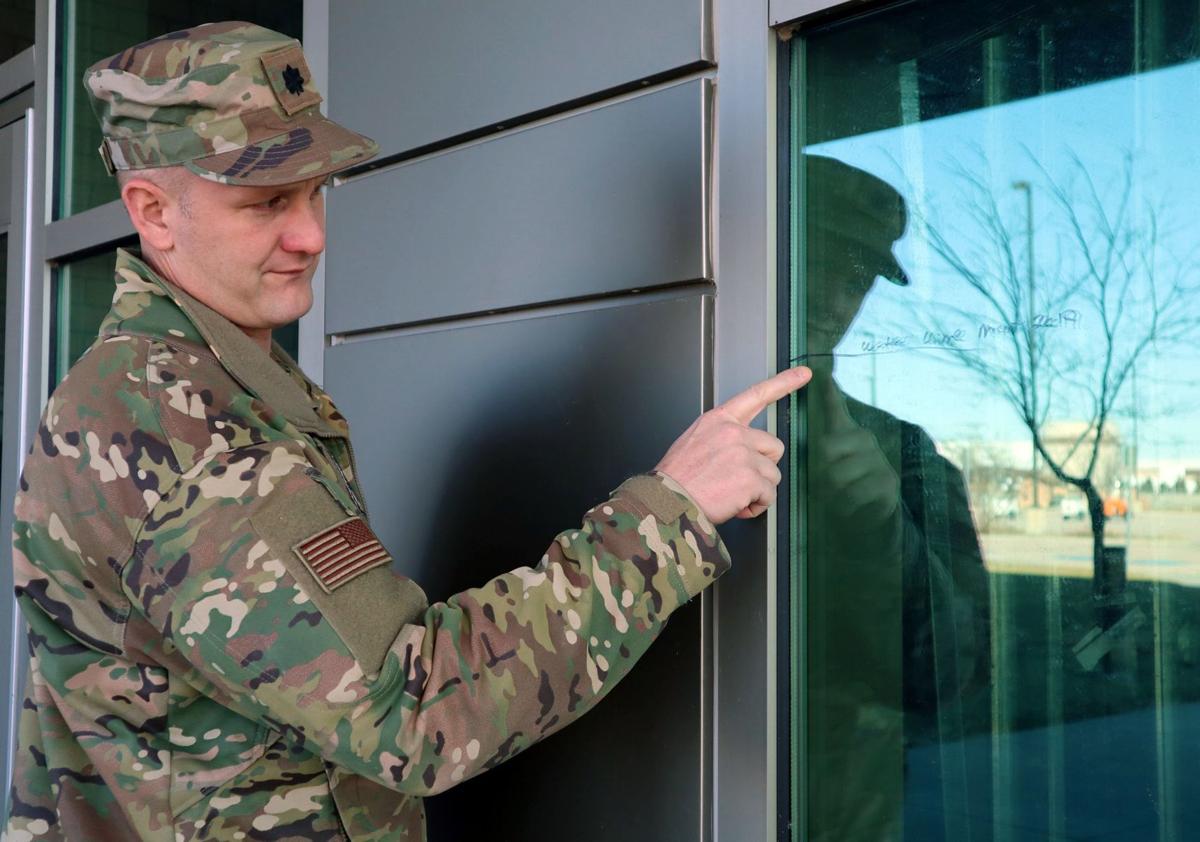 Lt. Col. Chris Conover, Project Management Office director, points to a waterline Dec. 4 on Tennant Hall. For reference, Conover stands 6 feet, 2 inches. The former intelligence squadron building, for “processing, exploitation and dissemination of intelligence,” is going to be re-purposed for different units appropriate for its space. 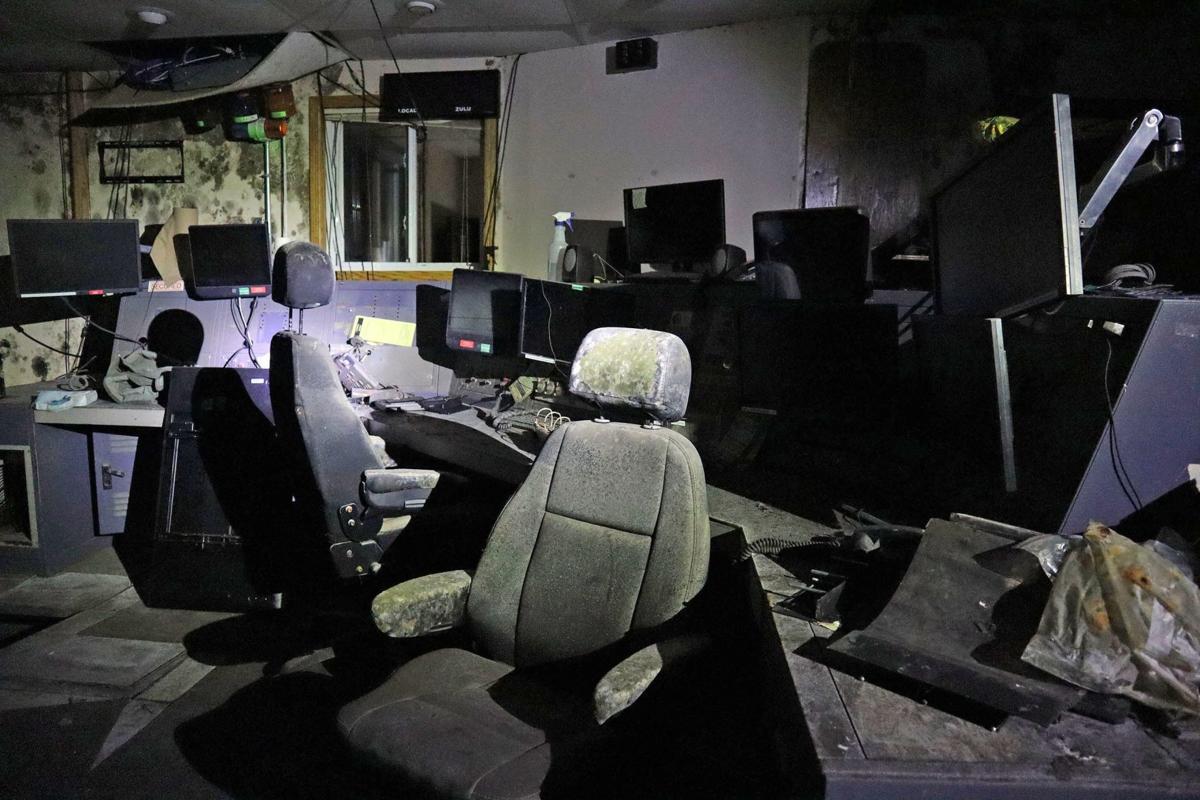 This room in the 55th Wing Headquarters Building was torn apart by the flood. Mold covers the chairs and walls.

This office in the 55th Wing Headquarters Building was torn apart by the flood. Its ruined furniture, books and windows sat abandoned Dec. 4.

After floating through base on floodwater, this dumpster made its new home on top of Offutt’s softball complex fence. The water was 14 feet deep in this area.

Lt. Col. Chris Conover, Project Management Office director, points to a waterline Dec. 4 on Tennant Hall. For reference, Conover stands 6 feet, 2 inches. The former intelligence squadron building, for “processing, exploitation and dissemination of intelligence,” is going to be re-purposed for different units appropriate for its space.

This room in the 55th Wing Headquarters Building was torn apart by the flood. Mold covers the chairs and walls.

Fish washed up on the runway. Floating dumpsters were stuck on top of fences. A 60-foot stretch of the base’s perimeter gate was missing. Parking lots and sidewalks were covered in corn, sewage water and debris.

Now, 299 days later, Offutt is still cleaning up the mess.

With one-third of the base under water — in some areas 12 feet deep — it was the biggest natural disaster ever to affect Offutt. To work around the countless facilities lost in the flood, base officials had to set creative backup plans into action.

With specialized engine and aircraft diagnostics equipment ruined, they brought in a mobile lab that’s normally used for deployment.

Deployment training was moved back to its original location in Council Bluffs after a one-year-old shooting range was destroyed.

Workers from the flooded facilities deemed unfit for personnel were displaced throughout Offutt. Capt. Eric Nelson, current operations division chief, said all of those 3,200 people — roughly half of those working on base — have now been assigned temporary work spaces.

“We basically had to scramble to find places for people to work because our mission doesn’t stop,” Nelson said. “Wherever there was an open desk, you have people sitting.”

To squeeze them all in, walls were knocked down to create conference rooms, and dorms were transformed into offices.

Offutt officials asked a contracting squadron to move out of a shared building to make room for two additional reconnaissance squadrons.

Working so close to others slows down productivity, Conover said, and having squadrons separated delays communication.

Due to an issue with sewage capacity, many buildings only have portable toilets.

The Martin Bomber Building, a quarter of which went unused for 10 years, was reinvented to accommodate approximately 1,000 displaced workers. Now, it’s filled with makeshift offices, complete with desks, wifi and communication lines.

They’re learning as they go, Conover said. Units are still being shifted around base after realizing their placements didn’t meet their mission’s needs.

Those missions, Conover said, have never been compromised, just complicated by tasks taking longer or further distances needing to be traveled.

Now operating at Offutt’s new temporary normal, the base’s ruins are a constant reminder of what once was. Built in the 1890s as Fort Crook, Conover said Offutt lost irreplaceable pieces of history.

All aircrew training equipment — besides pilot and navigator simulators — was ruined, worth approximately $234 million. Though they rapidly built a single simulator, which mimics missions to practice on the ground, Conover said the loss disrupted training.

The headquarters for the 55th Wing, 55th Operations Group and 55th Security Forces Squadron was lost. Essential equipment that operated 24 hours a day for decades was wiped out with the wing’s primary command post, so they now have to utilize alternate locations around base.

The headquarters building, as well as many others, is covered from floor to ceiling in black mold. Offices are full of crushed wooden furniture. Historic photographs were torn from walls. Food wrappers litter the hallways after ransacked by wild animals.

While still in its “raw state,” Conover said it’s safe enough for those wanting to grab their belongings that survived the flood. Flashlights and masks are needed to walk through the cold, pitch black, powerless buildings.

Conover said recovery efforts are estimated to cost $822 million, not including “the guts of the building,” such as furniture and equipment. Estimated costs continue to rise, he said, because of previously unaccounted for requirements.

Thirty facilities will be restored. Only one, the Munitions Storage Facility, is completely done so far.

Salvaged buildings will be repaired within nine months to a year-and-a-half, Nelson estimates, depending on their size. Conover said the order of facilities being restored is based on importance.

“The urgency to get back any type of mission capabilities is the priority,” Conover said.

The Bennie Davis Maintenance Facility, Offutt’s primary aircraft maintenance building, is the largest building being brought back, Nelson said. Though restoration is still in the beginning stages, they’re hurrying to get the building back to normal.

“We’ve been rushing to restore capability before winter sets in and everything freezes,” Conover said. “We need running water and heat and bathrooms. That’s a big, big project.”

For the 69 irreparable buildings, Conover anticipates demolition to begin early 2021.

The new buildings are estimated to take three years to complete.

Until then, Conover said seven of those facilities were cleared for workers to use temporarily in their current conditions. Two more will be within the next five weeks.

With the complete overhaul of the base’s structure, Conover said officials are using it as an opportunity to redesign the base layout.

He said they’re planning to position mission-related sets together throughout eight different campuses.

Currently in the rebuilding process, Conover said meetings are being held to discuss each facility’s needs and requirements. Those needs, he said, include flood prevention strategies.

Conover said Congress is calling for them to be built to the 100-year flood level, meaning floods have a 1% chance of affecting it per year. Offutt is also planning to raise mechanical and electrical units so that they can’t be destroyed as easily.

Many buildings were previously constructed using sheet rock, but they’re now opting for cinder block. Buildings made with it were much less affected by the flood, Nelson said, and far easier to clean.

Even with the extra precautions, anything could happen. Conover that no matter what disaster strikes, their mission will never be stopped.

“Bottom line, we cannot let mission fail,” Conover said. “We have to find a way to keep mission going.”