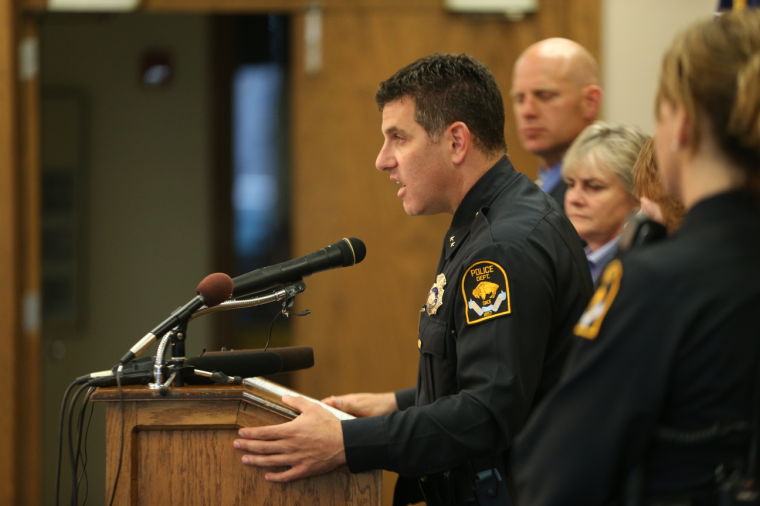 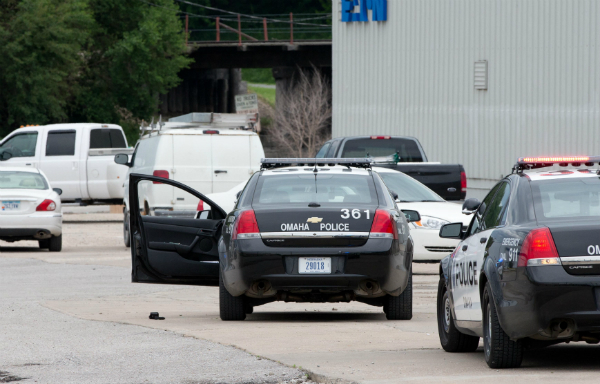 Omaha police respond Saturday to a series of shootings that took place in a 30-minute period.

Omaha police respond Saturday to a series of shootings that took place in a 30-minute period.

The gunman responsible for a trail of death and bloodshed Saturday in South Omaha still lay nameless in the Douglas County Coroner's Office late Monday morning.

Police said the gunman, killed in a firefight with an Omaha officer, died without any ID on his body. He had no easily identifiable characteristics, such as tattoos, or family members stepping forward to provide clues to his past.

The man, known for now as KK Doe, is blamed in the slayings of two Omahans and the critical wounding of two others. Police say he knew only one of his victims.

An autopsy on the gunman was scheduled for Monday morning.

“They're trying to answer any questions that are right now unanswered,” Kleine said.

One person who could provide some answers is his accomplice, whose whereabouts remained unknown Monday morning. The two suspects showed up about 2 p.m. at the door of a man police said was familiar to both – Aaron Anderson, 31. Moments later, Anderson lay bleeding in the hallway of his apartment building at 3104 Hascall St.

One suspect fled in Anderson's car. The second man set off on foot, covering more than a mile of south Omaha in 30 minutes during an anger-fueled death march that upended the lives of those unfortunate enough to cross his path.

One of those people, 25-year-old Anthony Vazzano, was working a side job mowing a lawn when he was shot. He had been saving money to visit his sister and her family in Hawaii.

Omaha Police Chief Todd Schmaderer said Sunday that “other innocent lives would have been lost” had Officer Coral Walker not fatally shot the suspect along Dahlman Avenue, south of F Street.

Schmaderer called the exchange between the officer and suspect a “gunbattle” and said multiple shots were fired by both men. Walker was not injured.

Schmaderer said the shooter and first victim were connected, but the three other victims appeared to be chosen randomly.

“Had it not been for Officer Walker, he would have continued,” the chief said. “He was on a mission. He was not going to stop.”

It was the third fatal shooting involving an Omaha police officer this year.

During a press conference on Sunday, Schmaderer outlined Saturday's chain of events:

At around 2 p.m., two men, whom Schmaderer described as Hispanic, entered an apartment building at 3104 Hascall St. A resident of the building, Ken Ertzner, 53, said he heard two gunshots.

“There was no doubt in my mind what had just happened, so I picked up my phone and dialed 911,” he said.

Ertzner said he found Aaron Anderson, 31, “squirming” on the floor in the hallway. He had been shot twice, once in the head and once in the chest.

“I took one look at him and knew there was nothing I could do to help.”

Anderson was taken to Creighton University Medical Center. His condition was not released Sunday.

One of the two men who had entered the building took Anderson's car. The other left on foot. That man, the suspect in the shootings, was seen walking south over the 36th Street Bridge and was described by a witness as looking angry, Schmaderer said. The police chief said the suspect was approximately 5-foot-4 and 120 pounds.

About 20 minutes after Anderson was shot, Angel Cabrera, 46, was wounded at 3901 S. 33rd St. He reportedly was shot in the head and was taken to the hospital by ambulance in critical condition. Schmaderer said Cabrera was expected to survive.

Pascual Bautista-Raymundo, 25, was shot a few minutes later at 3309 E St. He was found in an alley, wounded multiple times in the neck. He was taken to Creighton University Medical Center and later died.

Shortly after Bautista-Raymundo was shot, Vazzano was fatally shot near 34th and F Streets. He was taken to the hospital by ambulance and later died.

Rebecca Barrientos-Patlan, who lives nearby, tried to save Bautista-Raymundo. She gave him CPR and held him as they waited for paramedics, said her husband, Virgil Patlan, a retired Omaha police officer.

Tomas Vasilio, who identified himself as a close friend of Bautista-Raymundo's, said the victim's family did not want to comment.

“They're speechless,” he said from the porch of the family's home.

“We'd talked about being visitors in this land and not wanting to get into trouble,” Vasilio said. “Then something like this happens. A person would have to be really ill to do something like that.”

After Bautista-Raymundo was shot, Virgil Patlan got in his car and followed the gunman, who was on foot. Neighbors also tried to help. Two men who had been with Vazzano joined the chase, Patlan said.

“I realized we were all on the same page about the bad guy,” he said. “I just didn't want him to get away.”

Walker, the police officer, caught up with the suspect, just south of F Street on Dahlman Avenue. The gunfire began.

Walker's police cruiser was struck by bullets. Multiple shots finally took down the gunman. Like his victims, he was taken to Creighton University Medical Center, where he later died.

“I offer my sympathy to the victims and their families and my appreciation to the Omaha police officers, particularly Officer Coral Walker, and the citizens who demonstrated heroic actions in the face of a life-threatening situation,” Mayor Jean Stothert said in a statement. “Their actions may have prevented further loss of life.”