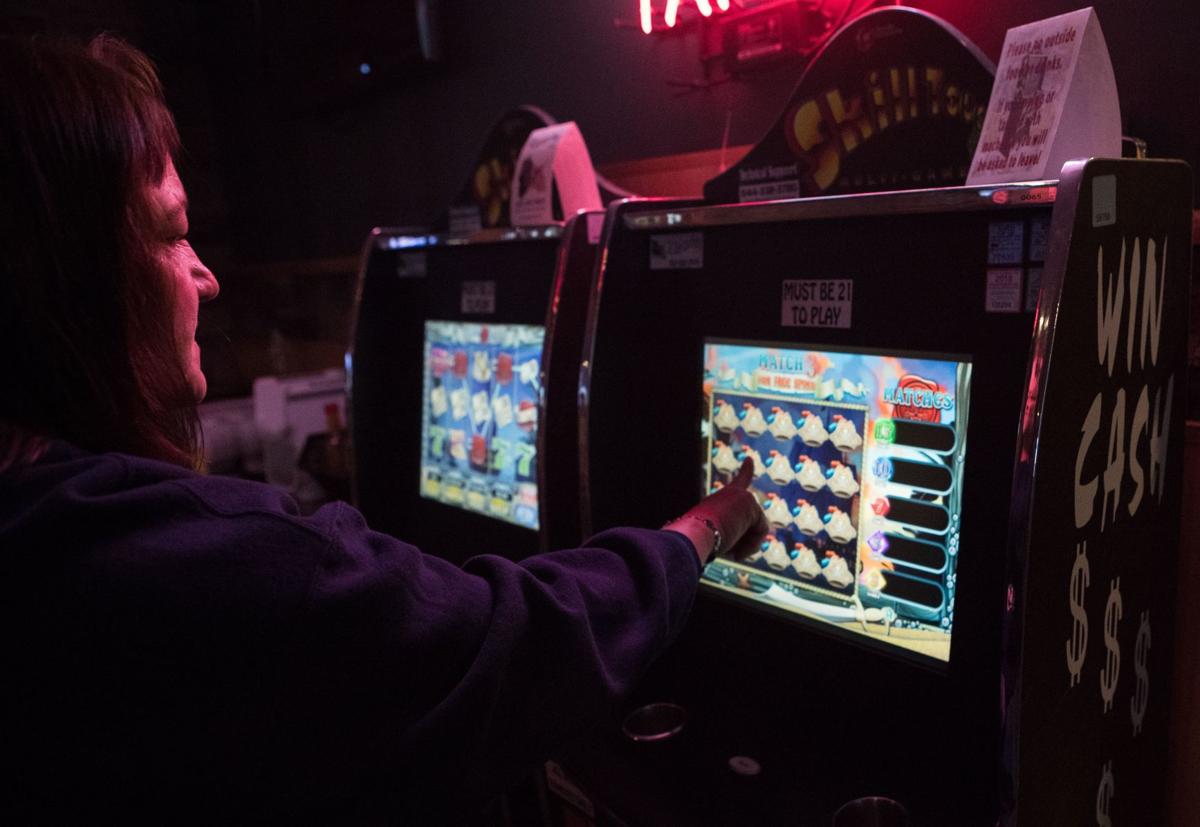 Lynn Hass gets a bonus round in a Skill Touch game at the Denton Daily Double in Denton, Nebraska, on Friday. 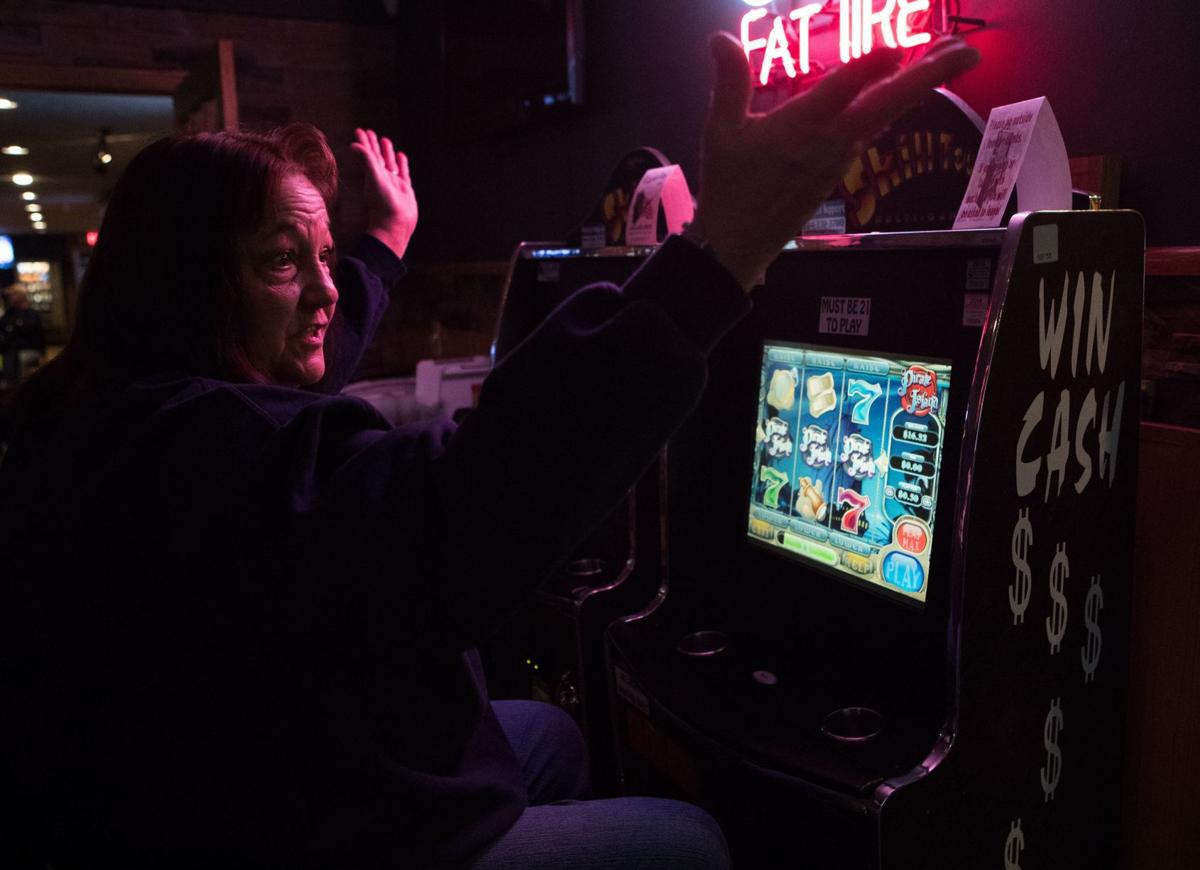 Lynn Hass celebrates after winning $20 in a Skill Touch game at e Keno parlor in Denton, Nebraska, on Friday. Anti-gambling activists says the games don't require enough skill to be legal in Nebraska. “You could train a monkey to play,” certified gambling counselor Ron Felton said. 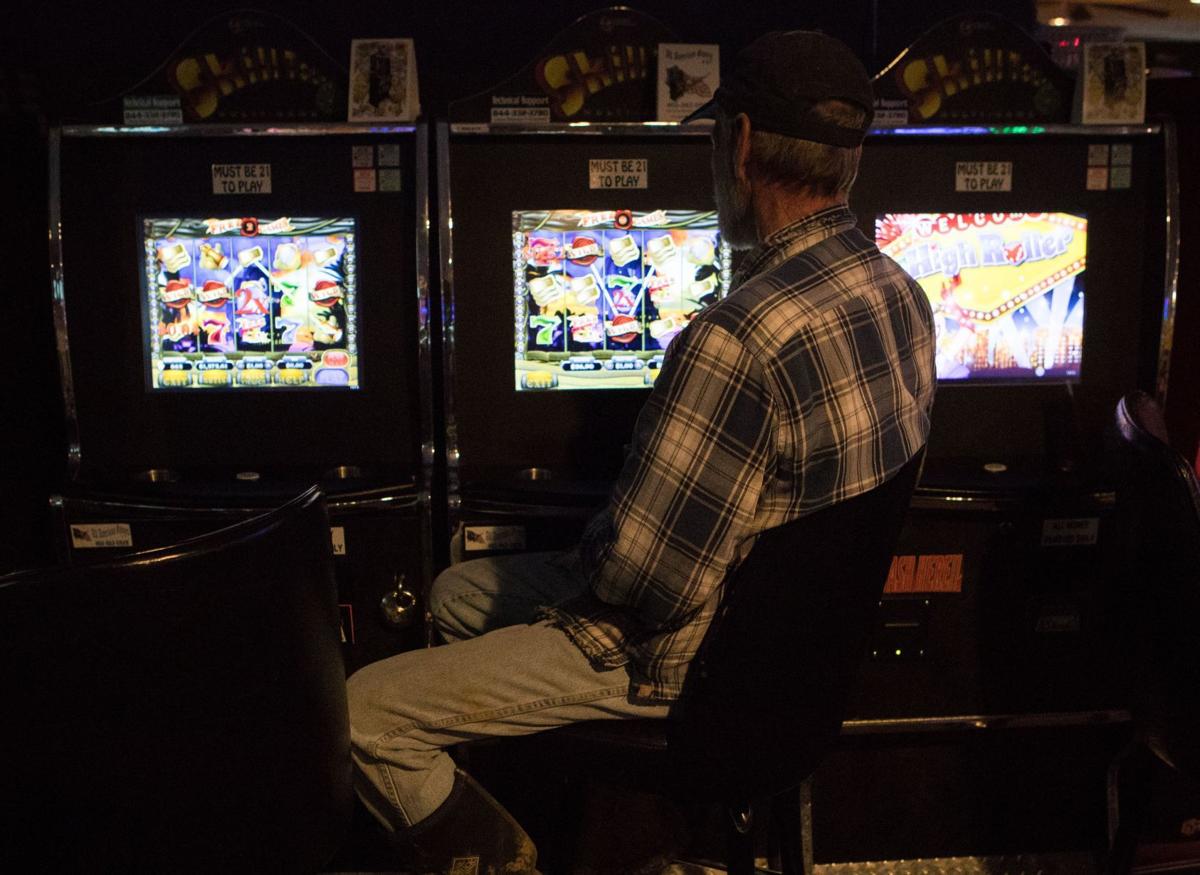 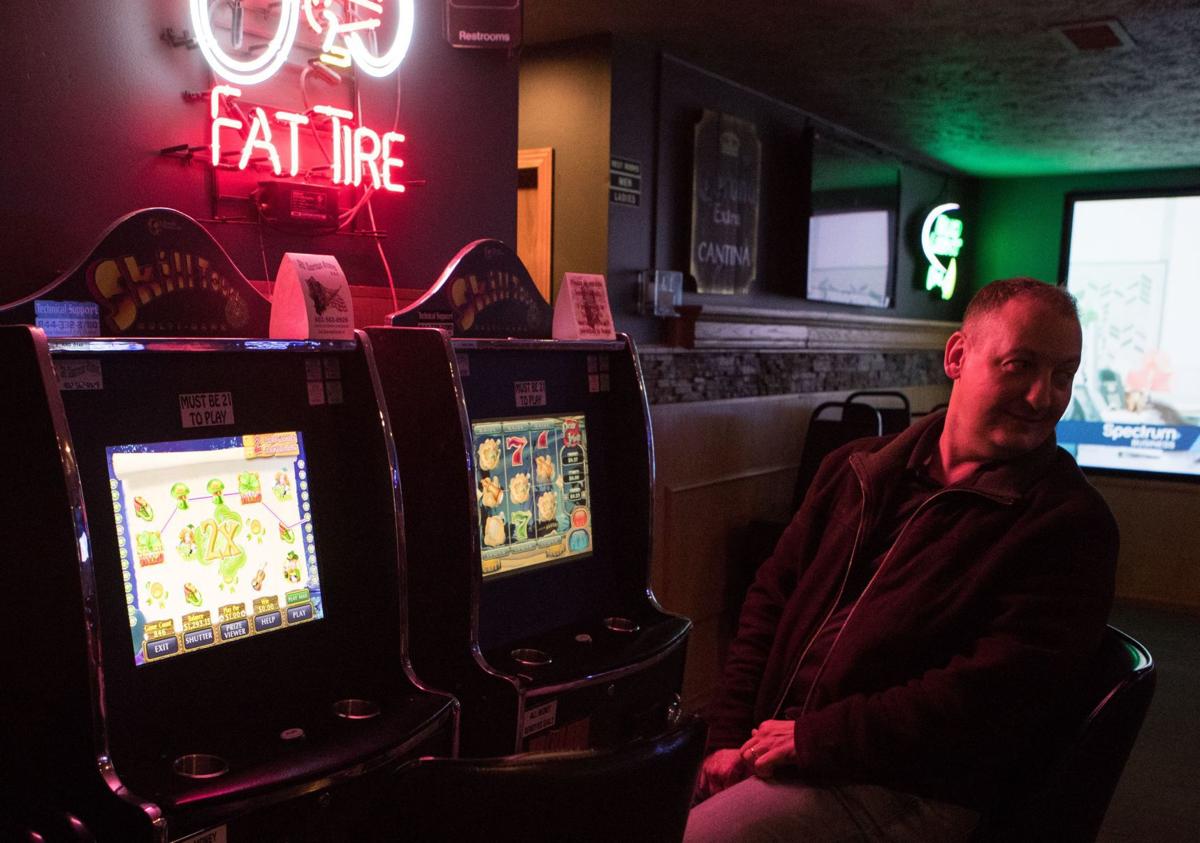 Darin Gourka plays a Skill Touch game at the Denton Daily Double in Denton, Nebraska, on Friday. Scott Zeilinger, co-owner of the tavern and keno parlor, said his five "skill" machines keep customers in the tavern and spending money. 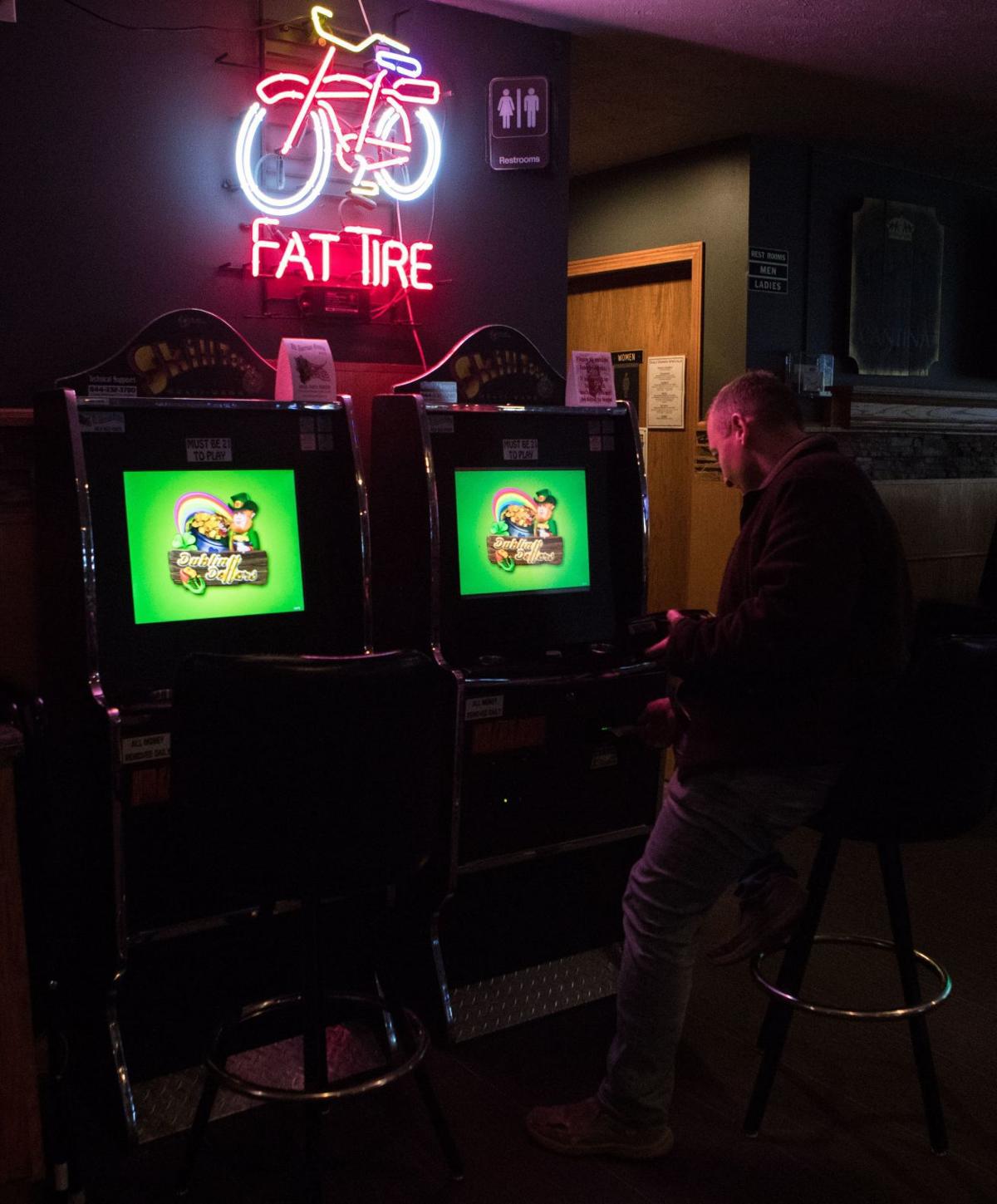 Darin Gourka gets money out of his wallet to play a Skill Touch game.

Lynn Hass gets a bonus round in a Skill Touch game at the Denton Daily Double in Denton, Nebraska, on Friday.

Lynn Hass celebrates after winning $20 in a Skill Touch game at e Keno parlor in Denton, Nebraska, on Friday. Anti-gambling activists says the games don't require enough skill to be legal in Nebraska. “You could train a monkey to play,” certified gambling counselor Ron Felton said.

Darin Gourka plays a Skill Touch game at the Denton Daily Double in Denton, Nebraska, on Friday. Scott Zeilinger, co-owner of the tavern and keno parlor, said his five "skill" machines keep customers in the tavern and spending money.

Darin Gourka gets money out of his wallet to play a Skill Touch game.

DENTON, Neb. — In the back room of the town keno parlor sits a row of video game consoles that look just like video slot machines, which are illegal in Nebraska.

But after the tumblers in the games stop spinning, a player has to manipulate the touch screen to make the numbers or images line up. If you can do that, you win — and you’ve made the game a legal game of skill, according to those who play and provide the machines.

Scott Zeilinger, the co-owner of the Denton Daily Double tavern/keno parlor, said he often hears customers say it’s crazy to think that a second push of a button can render these machines, called Skill Touch, legal.

When asked the difference between a slot machine and what he has in his back room, Zeilinger had to admit, “not much.”

“The skill involved is little to none,” he said.

These so-called “skill” machines, which also go by names like Nebraska Skill, Big Daddy and Banilla, are thriving across Nebraska, tripling in number over the past three years. Unlike in neighboring Iowa, they operate with almost no regulation in the Cornhusker State — untaxed, uninspected and unrestricted by age of player or number of machines per location — even though many in the gambling business maintain they’re illegal.

Now, because they can be found in hundreds of bars, convenience stores and veterans clubs across the state, they’re starting to get the attention of those who counsel problem gamblers. They are seeing clients who can gamble away hundreds of dollars in an all-day binge.

Three years after the state tried and failed to shut down skill games, some anti-gambling activists say that Nebraska should try again.

“It’s horrible,” said Pat Loontjer of Gambling with the Good Life. “We’ve kept the casinos out, but they’re sneaking (these) in through the back door.”

Similar video games have been fixtures in taverns and convenience stores for a decade, though the skill machines have emerged in Nebraska within the past four to five years.

First, it was a game called Bank Shot, which requires a player to not only start the wheels turning, but stop them, then manipulate the puzzle to win.

But after the Nebraska State Patrol confiscated some of those machines, the Nebraska Supreme Court put a chill on enforcement efforts with a 2011 ruling that Bank Shot was a legal game of skill, if it was operated in “spin” mode. That ruling affirmed a lower court ruling from 2010; the game’s distributing company responded to the 2010 ruling by reprogramming Bank Shot games so they could be played only in spin mode. The Supreme Court ruling also shifted the burden of proof. Before, game owners and operators had to prove the games were legal; now, the State Patrol has to prove the games are illegal before taking enforcement action. Because software tests of Internet-linked games like Skill Touch are expensive and few labs do them, the patrol has moved on to other duties, saying it’s too difficult to determine whether a skill game is legal or not. A patrol spokesman said last week its stance has not changed in recent years. Skill machines have spread like wildfire across Nebraska. You can find them in grocery stores in north and South Omaha, truck stops along Interstate 80 and a steakhouse in Sidney. In Fremont, there is a whole room full of the machines at a convenience store. North Platte, for a time, had an entire storefront devoted to Skill Touch machines. And recently, a keno parlor in Scottsbluff had to be warned that it was advertising something illegal after it touted its “new room filled with slot machines.”

They’re in every convenience store in town, said Ron Felton, a certified gambling counselor who works in North Platte. “If I was to pick one type of gambling that is on the increase, this would be it, because it’s new.”

Felton, as well as David Geier, the executive director of the Nebraska Gamblers Assistance Program, expressed concern about the lack of regulation. Anyone, of any age, can play the games in Nebraska. No one checks to make sure the games are paying out a reasonable percentage of prizes. And unlike other forms of legal gambling in Nebraska like keno or pickle cards, the games don’t generate any tax revenue.

Felton and Geier are among those who believe the skill games are clearly illegal.

“The idea that it’s not gambling because there’s some element of skill is ludicrous,” Felton said. “You could train a monkey to play.”

A winner on a skill game doesn’t prompt a gusher of quarters, but a paper receipt that can be redeemed for cash.

Most of the wins are the 25- to 50-cent variety — just enough to keep someone playing. But if you wager enough money, you can win a jackpot as high as $2,400.

State Tax Commissioner Tony Fulton, whose agency regulates charitable gambling, said his agency has no authority to regulate or restrict the games, other than to require them to obtain a yearly “mechanical amusement device” stamp, costing $35.

No inspection is required, though the state recently added some wording on the stamp to make it clear that the state stamp on a skill machine “is not evidence that the device is legal.”

The State Department of Revenue, just last year, also began requiring businesses to identify the number and specific type of amusement devices they have. The result was a surprise to officials: 1,577 total amusement devices, of which 628 were Bank Shot machines, which have already been deemed legal by the Supreme Court. What’s the status of the 949 others? It depends on whom you ask.

Fulton said he could not comment on whether they’re legal or illegal, though he added, “it’s certainly something Nebraskans should be attentive to.”

At least one form of skill machine has been restricted to casinos only because it was deemed primarily a game of chance, a slot machine, said David Werning of the Iowa Department of Inspections and Appeals. Two other skill games, Big Daddy’s Nudge Skill Plus and Spooky Nudge Skill Plus, are being required to go through some legal hoops to be declared legal in Iowa.

The skill games that have been declared legal in Iowa must meet several restrictions, Werning said. They cannot produce cash prizes, only credits of $50 or less that can be exchanged for merchandise, like a free pizza; there can be no more than four machines in one location; and no one under 21 can play them.

In addition, Iowa has capped the number of skill machines allowed in the state at 6,928 — the number that existed when the state began regulating the games in 2004, he said.

At the keno parlor in Denton, Nebraska, Zeilinger said he installed two more skill games in recent years, and now has five, plus two Bank Shot machines. It’s a no-brainer, he said. They require no additional personnel, draw a lot of play on the weekends, and add to his bottom line through his cut from the machines and by keeping customers who might be bored with the slower-moving keno game from leaving. Keeping patrons, to spend more money, is the name of the game, he said.

John Liebsack, who runs the Veterans of Foreign Wars Department of Nebraska, said that the 50 skill games operated by the VFW help pay the bills at a time when there are fewer veterans to keep operations going. The VFW keeps about 50 percent of the profits.

What should be done about the proliferation of these gray-area gambling devices?

Opinions vary, from imposing a tax on them to outlawing them.

State Sen. Paul Schumacher of Columbus said the state should just legalize such forms of gambling, because the games are already out there, just untaxed and unregulated. Schumacher led an unsuccessful attempt in 2015 to tax the skill machines out of existence, saying they were illegal and were taking business away from legal video games. Schumacher is already in the gambling business, heading a company that runs keno lotteries for 60 small towns, and has tried, unsuccessfully, to get the State Legislature to take steps to legalize casinos.

Ricketts is a former board member of Gambling with the Good Life.

“The Governor’s Office encourages anyone with a concern about how a machine is being operated to report it to the Nebraska State Patrol, so it can be fully investigated,” Gage said.

“The State Patrol needs to do their job, pull one of these machines and test it (for legality),” she said. “Spend the money. If you rattle their cages, maybe they’ll go away.”