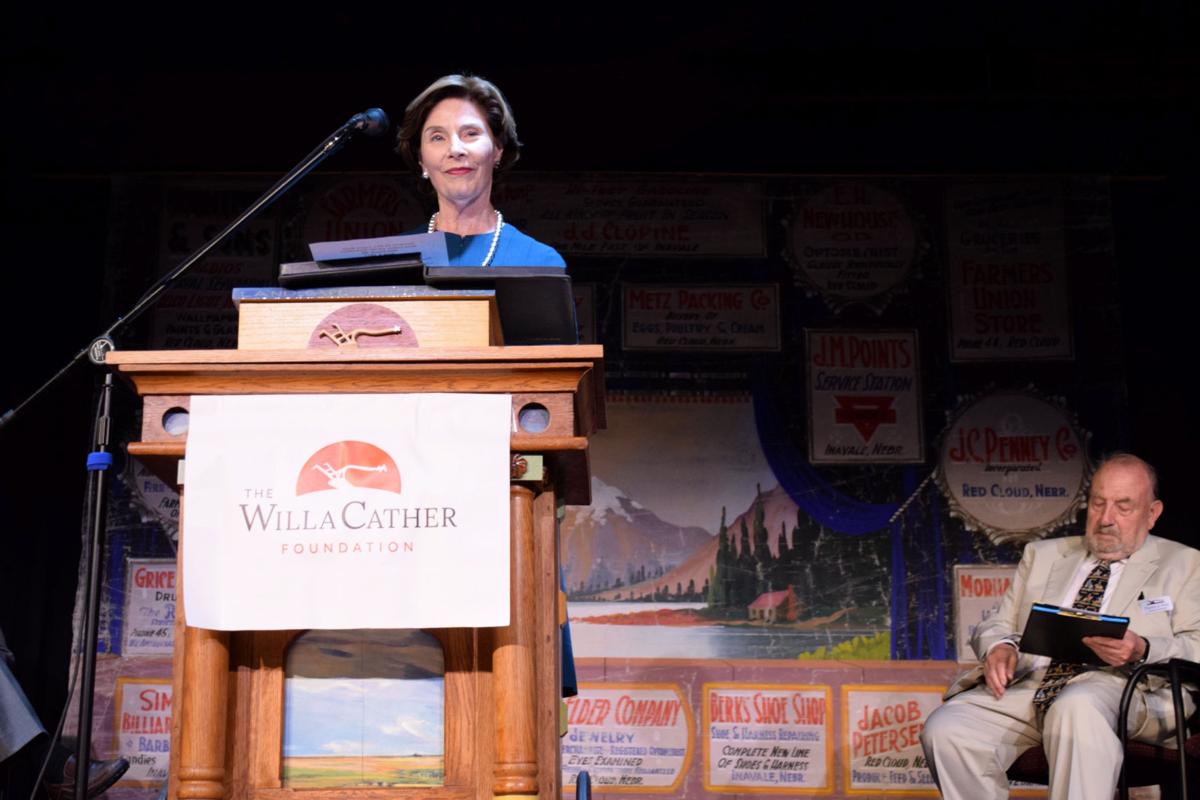 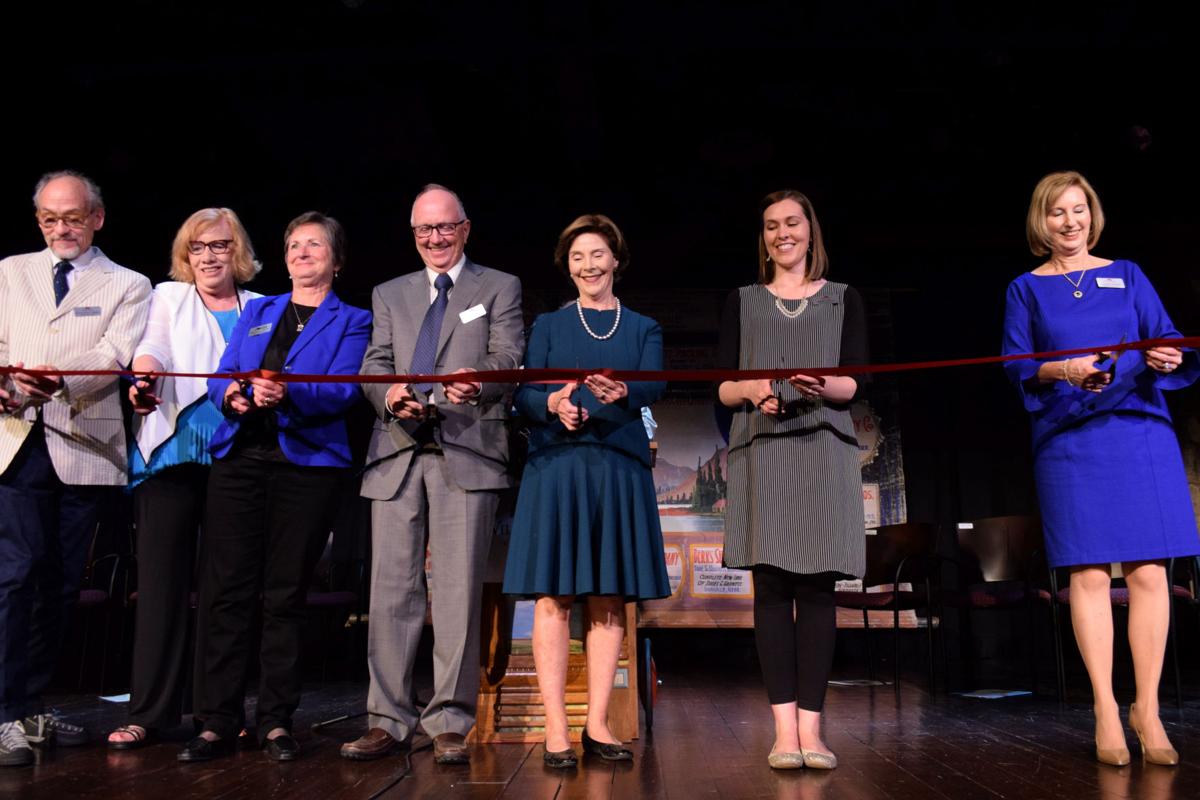 RED CLOUD, Neb. — A first lady came to Willa Cather’s hometown Saturday and officially opened a $7 million center meant to re-ignite fascination in the famed novelist and the tiny Nebraska town where she set her most famous books.

Former first lady Laura Bush gave the keynote address during an afternoon ceremony, praising Cather’s portrayal of the rugged Great Plains and its tough-as-nails women in books such as “O Pioneers” and “My Ántonia.” Bush then cut the ribbon on the National Willa Cather Center, which houses a museum, a bookstore, an archive and several apartments and businesses on a historically preserved block of main street.

“If Willa Cather’s characters built a fire, it was because they were cold and they needed something to warm them,” Bush said. Cather “helped teach us what it meant and what it means to be a pioneer. ... She gave a lasting voice to the Western spirit that defines us as a nation. That is what makes her work so timeless.”

Bush spoke to a capacity crowd of 300 inside the restored Red Cloud Opera House while standing close to the spot where, in 1890, then-16-year-old Willa Cather delivered an above-average high school commencement speech.

Cather went on to Lincoln, then Pittsburgh and then New York, where from a Manhattan apartment she drew from her Red Cloud childhood to write best-selling books and win the Pulitzer Prize.

She became an author who in her time rivaled in fame and fortune slightly younger contemporaries including Hemingway, Faulkner and Fitzgerald.

Cather’s success created intense pride as well as a bit of fear and loathing in her hometown. A generation of Red Cloud residents was scandalized by the publication of novels and short stories that drew from, and in some cases were obviously based on, real-life Red Cloud heroes, villains and events. (One famous example: Cather based Ántonia Shimerda, the main character in “My Ántonia,” on a Bohemian immigrant and longtime Webster County resident named Annie Pavelka.)

In more recent decades the town of Red Cloud and its homegrown Willa Cather Foundation have, in fits and starts, preserved Cather’s childhood home, a chunk of Nebraska prairie and dozens of other homes and buildings key to her life and literature.

In 2003 the Cather Foundation reopened the restored small-town opera house where Cather learned to love music and theater. But that project paled in comparison with the National Willa Cather Center, which took more than a decade of planning and a $7 million fundraising effort — a staggering sum in a small town.

“Individual board members argued ‘We need to have some vision. We need to give it a shot,’ ” said Andy Jewell, a Cather board member and University of Nebraska-Lincoln professor who co-edited a popular book of Cather’s letters.

“This is a moment in my life when I’m realizing the wisdom of that,” Jewell said. “Of trying something that doesn’t seem quite possible — and then doing it deliberately and intelligently, with lots of people helping out.”

Omaha donors and foundations played an outsize role in this effort, with the family of Robert and Joanne Berkshire, the Peter Kiewit Foundation and the Robert B. Daugherty Foundation all giving at least $300,000 to build the National Willa Cather Center.

Now open, that center houses a museum where the public can learn about Cather’s life and view important artifacts from her life, such as two writing desks. It houses a climate-controlled archive that, for the first time, allows the foundation to properly store — and allows scholars to view — thousands of letters, manuscripts and other Cather artifacts in her hometown.

Ashley Olson, the Cather Foundation’s executive director, said the new center is already driving increased interest in its namesake author. Registrations for this year’s Cather spring conference more than doubled from last year. And Olson — like Cather, a graduate of Red Cloud High School — notices more townspeople taking an interest in the town’s most famous resident.

“People who have lived in Red Cloud for years and years are asking me for the first time ‘What time are the tours? What is on the Cather tour? What is the significance of that old church?’

“They are thinking ‘Hey, this is really cool. I want to be a part of this.’ And that is so positive for us and for Red Cloud.”

During Saturday’s event, past met present when stage host the Rev. Charles Peek introduced four living members of the Cather family in the audience as well as the 96-year-old granddaughter of Annie Pavelka, the inspiration for Ántonia.

Then Bush spoke. The one-time librarian quoted several passages from Cather novels while praising her ability to describe the prairie and the people who settled here and built towns like Red Cloud. She talked about how Cather’s strong female characters reminded her of her Arkansas great-grandmother who, widowed at 42, raised seven children on her own.

She talked about how she felt as if she already knew Red Cloud through Cather’s books, how she felt like she had already walked the town’s brick main street and run through the prairie grass because Cather described them so vividly in her writing.

She spoke of Cather’s focus on the immigrant experience, how Cather demonstrated how we are alike more than we are different. And, standing near where Cather gave her high school graduation speech 127 years ago, Bush congratulated the 300 people crammed into the restored small-town opera house for preserving the famed novelist’s memory.

“You are preserving history. Thanks to your generous support, our children and grandchildren can travel back in time and learn from Willa Cather’s example for generations to come,” she said.

Red Cloud, Nebraska, has built a 20,000-square-foot tribute to its most famous citizen, and it’s invited one high-profile guest to inaugurate it.