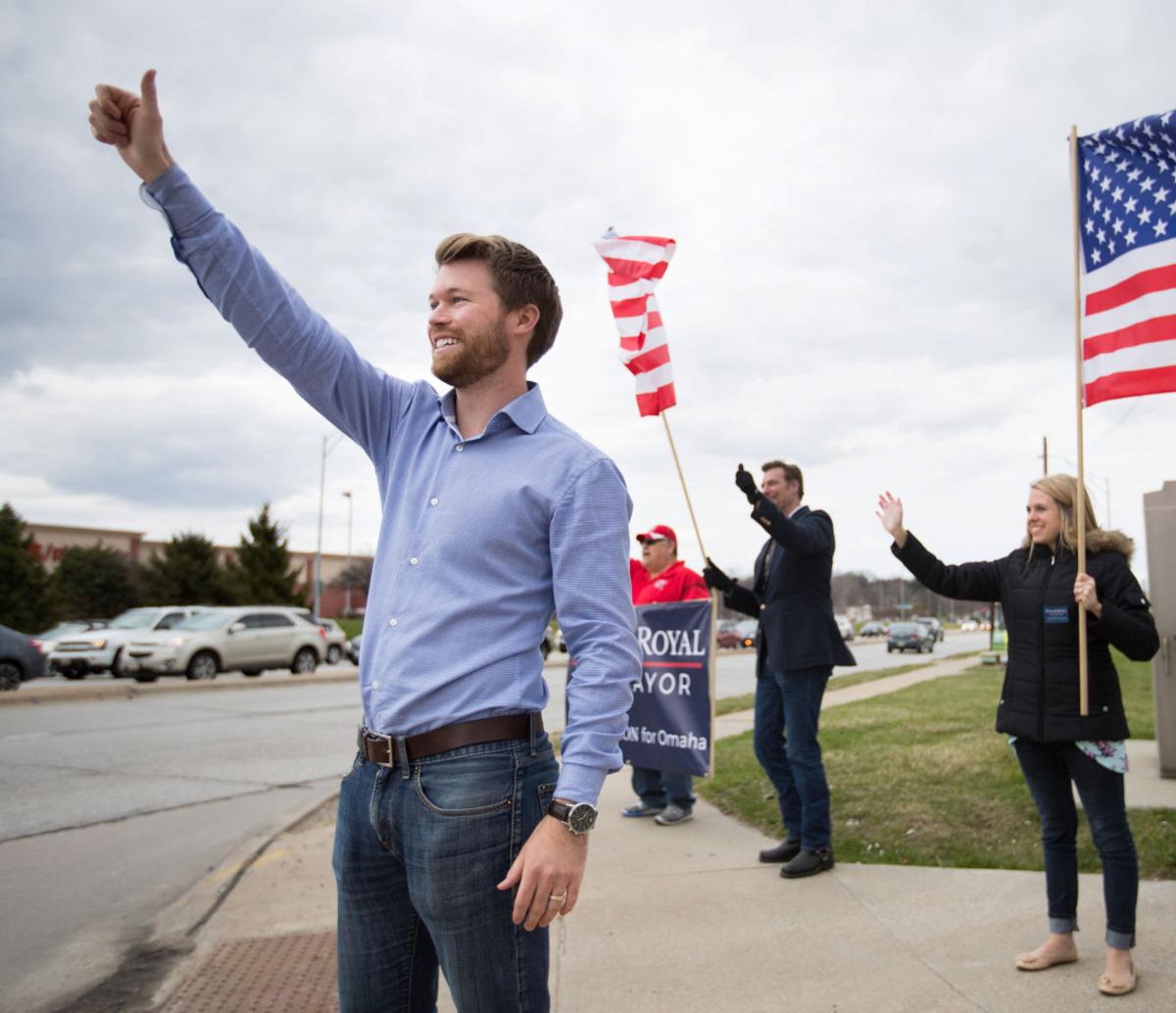 Mayoral candidate Taylor Royal, left, and supporters hit the streets as Omahans went to the polls on Tuesday. “I was expecting the race to be closer than it was,” he said. 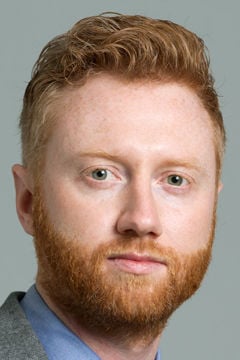 A quarter-million dollars can buy you quite a lot in Omaha. It can buy you a very nice three-bedroom house in a nice midtown neighborhood with good schools.

You can start a small business in Papillion, or open a palatial Dundee coffee shop, or you can become the Subway sandwich franchise baron of Bellevue. Or, instead, you can buy a Porsche 911 GT3, gun it up to 120 mph on the West Dodge Expressway, smash it into a wall, miraculously walk away from the wreckage, shrug and go buy another Porsche 911 GT3.

I just added this up, because it’s lunchtime and I am hungry: For $250,000, you can buy 20,000 5-ounce bacon-wrapped filet mignons from Omaha Steaks. That’s a lot of bacon-wrapped steak, my friend! And if you decide, well, that’s probably a little too much bacon-wrapped steak, you can instead take that quarter-million dollars and make the year of a charity that supports homeless veterans, or single parents, or abandoned animals.

Taylor Royal did not do any of those things with the nearly quarter-million dollars his parents donated to him during the course of his quixotic mayoral campaign.

Instead, the 27-year-old announced that, if elected, he would help bring a National Football League team to Omaha. He rented a billboard at 72nd and Dodge and plastered up a campaign ad prominently featuring a gargantuan version of his face. He bought TV commercials and radio spots, during which he banged on Mayor Jean Stothert for the Conagra headquarters departure, the quality of the city’s streets, the proposed streetcar project and her decision not to vote for President Donald Trump. He criticized challenger Heath Mello for many of these same things, and for being a politician who would be more of the same.

And, in Tuesday’s primary election, Taylor Royal earned himself 6,144 votes. He spent roughly $41 in family money for every vote he received.

“We knew from the beginning, there’s going to be some commitment of time, energy and resources,” Royal told me Wednesday. “We wanted to make sure we were making the best splash we could. For my platform and for our vision for the city.”

Said Taylor’s father, Scott Royal, whose name is on nearly $240,000 in donations given to the Royal for Mayor campaign: “We thought it was urgent. What he saw was the city that we love, the city that he loves, decaying from the inside out. ... He told (his mom) Trish and I, ‘I want to fix this stuff.’ We have been blessed to have the resources to believe in who he is, and what God has called him to do.”

This much is undeniable: Taylor Royal did make a splash. He jumped off the highest high board in his blue suit, did three flips and cannonballed his way into the above-ground pool that is Omaha politics.

He made a splash. It’s just that, well, not everyone standing by the pool likes to get splashed.

On Tuesday, Royal got nearly 11 percent of the vote, which seems pretty good as far as quixotic outsider mayoral campaigns go, until you remember that he finished 30 percentage points behind second-place Mello.

“What did any of this accomplish?” asks Paul Landow, a UNO political science professor, chief of staff for former Mayor Mike Fahey and a longtime observer of Omaha politics. “If politics was or is his goal, what has any of this accomplished? It was so preposterous that it seems like, therefore, it was obviously motivated by some other reason than getting elected. Because getting elected wasn’t going to happen.”

Landow said Royal made enemies among both local Republican Party leaders and business executives who support the streetcar.

“The whole thing seems to me that it could be best described as a misadventure,” Landow said.

If Royal did have motives other than winning, he wasn’t keen to share them on Wednesday. He said his goal was always to make it into the top two. He said he realized that would be an uphill battle when Mello, a two-term state senator and one of the state’s leading Democrats, got into the race.

Royal said he was humbled by the Omahans who did vote for him. He said he thought he would get more votes than he did.

“I was expecting the race to be closer than it was,” he said.

And Royal bristled — politely bristled, I should add — at my repeated questions about money.

“I hate the notion that it was, ‘Here’s a check and go do your deal,’ ” he said. “It wasn’t just money. My wife, my family, my aunts and uncles were out there with clipboards, collecting signatures and knocking on doors. It was a commitment of energy. It was a full-on effort and a belief in a vision we had for the city.”

That’s a fair point. This isn’t just about money.

But then it is also fair to point out that Taylor Royal was 26 when he began this campaign, he had never before run for office, he graduated from Southern Methodist University with his master’s degree in accounting less than five years ago, he returned to Omaha just two years ago and he does not remember the 1980s, because he was not alive then.

It is also fair to point out that Royal didn’t do any real fundraising outside of his immediate family members, and his first policy goal — bringing that NFL team to Omaha — made both stadium experts and many regular Omahans giggle.

On Tuesday, I told Royal, who struck me as both kind and smart, that his campaign made me imagine myself at 27 walking into the publisher’s office at The World-Herald and announcing that I should be publisher now.

“In regards to, why I decided to do this in the first place, or why, in your mind, I made the error to do it ... I moved back to Omaha at a time when Conagra was pulling up stakes, a huge red flag,” Royal said. “We all want to make the place we live in, Omaha, a better place. I decided I wanted to put myself out there.”

It’s so easy to dance on Taylor Royal’s political grave, question those quarter-million dollars spent, wonder why he didn’t get himself appointed to a Planning Board or run for a lower office instead.

But both Taylor and Scott Royal say the following: Taylor isn’t done, far from it. For starters, he now finds himself holding a couple of cards in the May mayoral election, if he chooses to nudge his supporters or campaign for Stothert or Mello. He played those cards close on Wednesday, saying he needed time to reflect on “adding a voice to the general election one way or another.”

He promised to stay involved in the community. And he will most likely run for political office again, his father says.

“I sure hope he does. Because I think America needs men that have his type of integrity and character.”

I had to ask Scott Royal the question, and so I did. Are you glad you and your wife dumped nearly $250,000 into the mayoral campaign of your son, who then received 6,144 votes on Tuesday?

If you had to do it over again, would you buy two Porsches or 20,000 bacon-wrapped steaks or donate the money to charity or do something else entirely? More simply: Do you feel good about your investment?

“Oh yeah, absolutely, I’m definitely happy and satisfied,” Scott Royal said. “We love this city, and we love the individual that was the candidate. I don’t think I could have spent it on a better cause.”

That’s a head-shaking statement. But I can promise you that, when Scott Royal said it, he sounded like the most honest man alive.

If a municipal election is an 800-meter race, Omaha is in the last stretch, and Jean Stothert and Heath Mello just broke into a sprint.