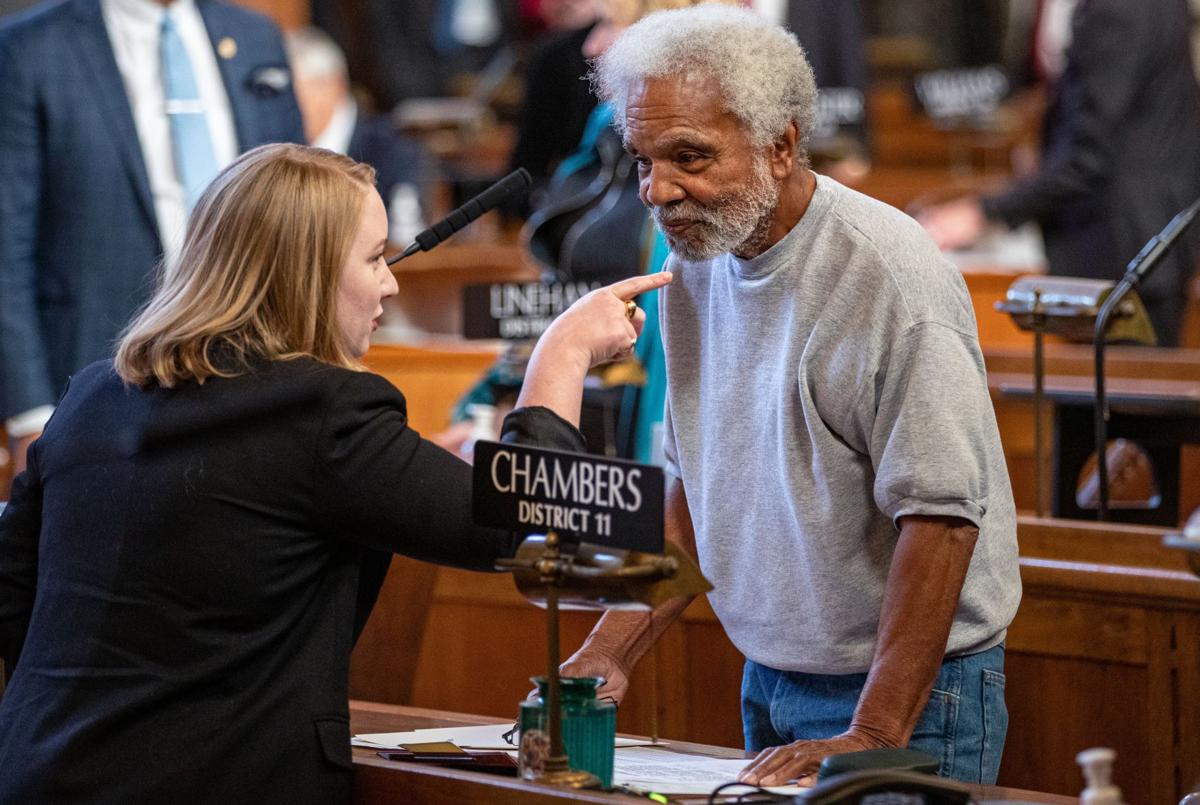 State Sen. Megan Hunt points out to Sen. Ernie Chambers a guest she has invited for opening day of the Legislature.

The World-Herald’s statehouse reporters round up news highlights from the Legislature and state government into the Capitol Digest — a daily briefing for the political newshound with a busy schedule.

Bills to replace Columbus Day with Indigenous Peoples’ Day, repeal income taxes on Social Security and name a state dessert were among more than 100 measures filed on the opening day of the 2020 session of the Nebraska Legislature.

One bill that wasn’t filed on opening day was the property tax relief plan crafted by State Sen. Lou Ann Linehan of Elkhorn, with input by the Revenue Committee (which she heads) and Gov. Pete Ricketts. Some tweaks are needed, Linehan said, so it will be introduced in the next few days.

One rural senator, Tom Briese of Albion, said he’s optimistic that something will be done to reduce property taxes during the 2020 session.

But was he fielding calls from irate taxpayers before the session began?

Nope. Callers on Tuesday night, he said, wanted to know what the state was doing about the many nighttime sightings of drones across the state.

This is the last legislative session for Sen. Ernie Chambers of Omaha, who has represented north Omaha since 1971 — except for a four-year break from 2009-2013 that was due to term limits.

The 82-year-old, self-proclaimed “defender of the downtrodden” — the state’s longest-serving state legislator — is term-limited again and cannot run for reelection in 2020. He has said he won’t seek to recapture his seat when he would become eligible again in 2024.

Chambers declined a request for an interview about his final session, saying he was too busy. But he was the first senator to speak on the floor after the session began.

“I can never let the Legislature begin without having a few words to say,” he started.

He used the time to berate state senators and Gov. Pete Ricketts, who he said are “blindly” loyal to President Donald Trump, calling the president “petty, demented and vindictive.” Chambers also criticized ministers and the religious who support the president despite Trump being twice-divorced.

A state buyer’s permit would be required before a person could buy a semi-automatic rifle or shotgun capable of firing in excess of 10 and five rounds, respectively. The permit would be similar to those now issued by the State Patrol, after a background check, before someone can buy a handgun.

Bayard Sen. Steve Erdman calls for the declaration of the tin roof sundae as the official state sundae in Legislative Resolution 282. The marshmallow-creme, ice cream concoction is said to have been invented by Harold Dean “Pinky” Thayer at a pharmacy run by his father in Potter, Nebraska. Unlike some other states, Nebraska lacks an official state dessert.

Sen. Tom Brewer of Gordon introduced a similar measure, but his LB 819 would phase in the tax break for Social Security, and provide less of an exemption for higher income retirees.

Such proposals have a huge fiscal impact, which has blocked passage of similar bills in the past.

LB 848, from Lincoln Sen. Patty Pansing Brooks, would rename Columbus Day as Indigenous Peoples’ Day. Iowa and South Dakota are among 12 states that have made similar moves to drop Columbus Day and instead recognize the native populations that were displaced and decimated by the arrival of European immigrants.

Just introduced my first bill of the legislative session, LB 815, which prohibits DHHS from implementing or pursuing waivers to Medicaid Expansion. The Department of Health and Human Services should be providing healthcare benefits to Nebraskans, not taking them away. #Neleg

Lincoln Sen. Adam Morfeld’s LB 815 would block the state from seeking or implementing any waivers to Medicaid expansion.

“The Department of Health and Human Services should be providing health care benefits to Nebraskans, not taking them away,” Morfeld tweeted.

Gov. Ricketts has supported the waivers, which would require most recipients to meet wellness, work and other requirements to obtain full benefits.

The Nebraska Legislature will continue the perpetual quest to lower property taxes this year, along with looking for ways to ease overcrowding in the state's prisons and addressing teachers' requests for help with handling violence in schools, among other issues.

The proposals by McCollister and Chambers are nothing more than permission slips. The very idea implies ownership of the citizens of Nebraska. Our rights are guaranteed by the Constitution of the United States. Shall not infringe means just that. Just as the 1st states shall make no law means no licensing, no permission slips, no restrictions shall not infringe means the same. How is the government requiring permission and deciding what we will be allowed to buy own and sell any different than the 18th and 19th century slave owners deciding what their slaves will be allowed? Just because its government does not make it any different or better.

You can't erase the first half of the Second Amendment. "Well-regulated" is NOT meaningless.

Yes Jim, look at all the crazy Democrat presidential candidates who want to confiscate all firearms!

Back that up with a quote.

Senator Chambers, you will be missed. Thank you for your service. Not to only your district, but to all Nebraskans.

I would hope the tax cut on social security and retirement isn't just for retired military but for ALL RETIRED people who live in Nebraska.