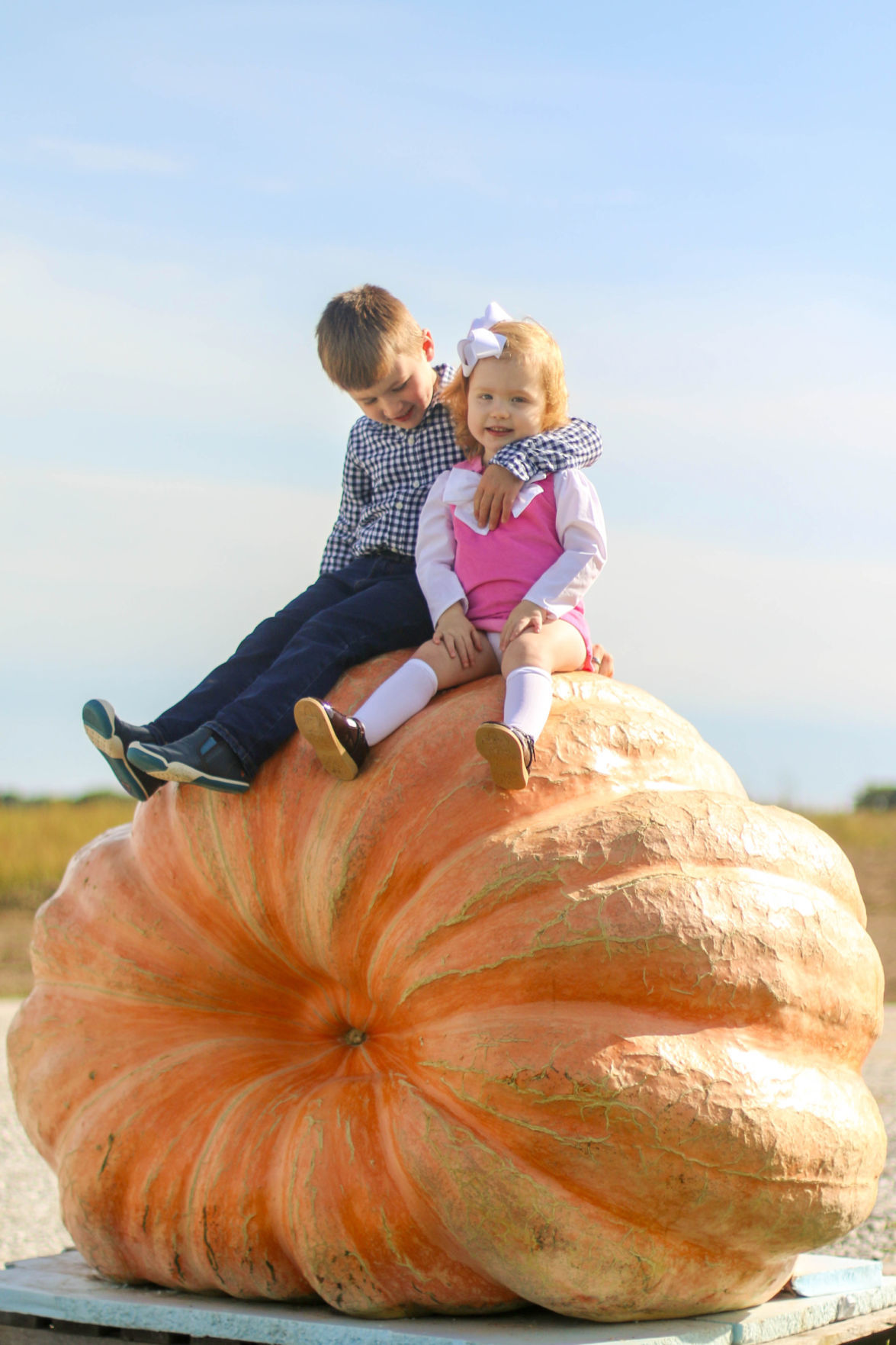 William, 4, and Rose, 2, atop dad Brent Cernik’s pumpkin. It took hours a day and a lot of “babying” to produce a record pumpkin. 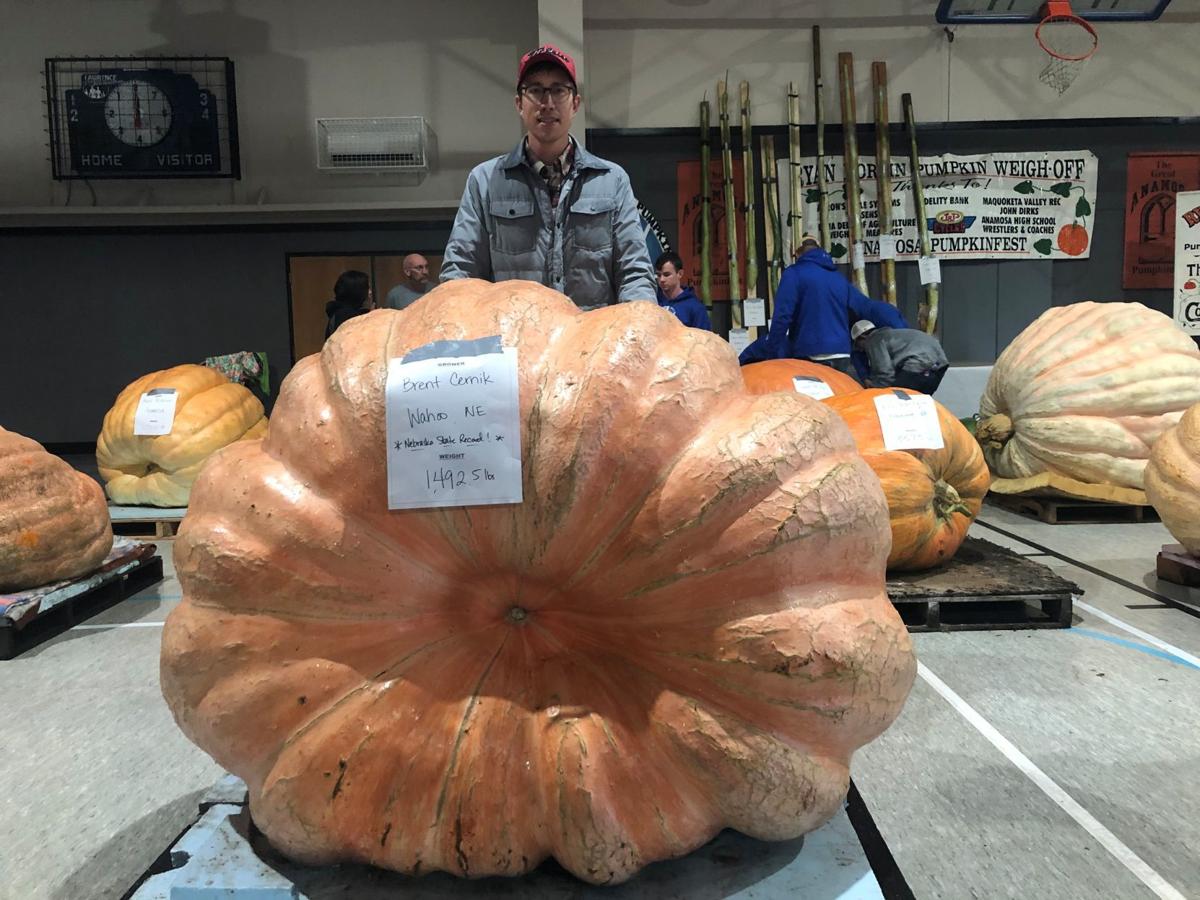 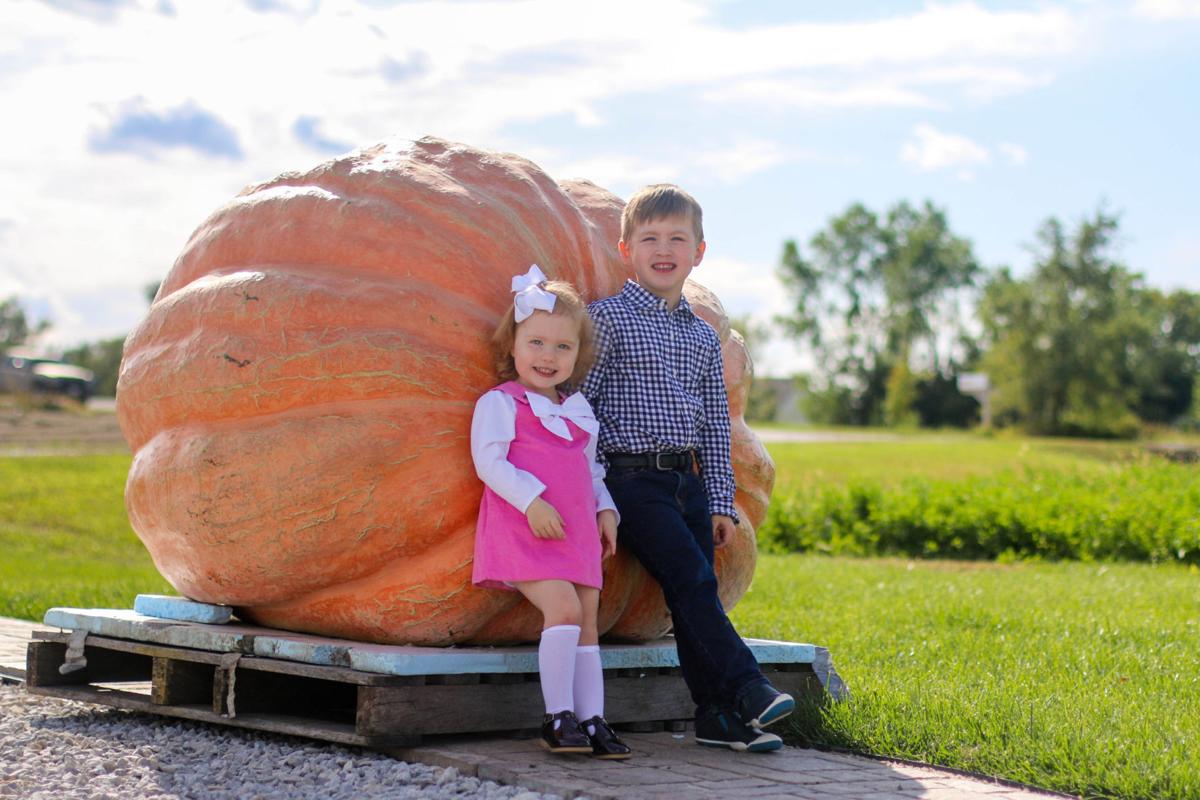 Rose and William Cernik with the Nebraska state record pumpkin. Their dad, Brent, figured he should try for the record now before he gets too busy driving his kids around to their activities.

William, 4, and Rose, 2, atop dad Brent Cernik’s pumpkin. It took hours a day and a lot of “babying” to produce a record pumpkin.

Rose and William Cernik with the Nebraska state record pumpkin. Their dad, Brent, figured he should try for the record now before he gets too busy driving his kids around to their activities.

Brent Cernik figures his neighbors had to wonder what was going on when they first spotted huge orange orbs in his garden that were carefully covered with blankets.

Or maybe it was watching him labor for hours in the dark, the plants around him lit up by a head lamp.

It takes a little craziness — and lots of dedication — to grow a state record pumpkin, the Wahoo pharmacist said. But this year, it paid off.

Cernik displayed the largest pumpkin from Nebraska at the Ryan Norlin Giant Pumpkin Weigh-Off on Saturday in Anamosa, Iowa. His pumpkin weighed in at a whopping 1,492.5 pounds. It bested the previous state record of 1,399 pounds by Darren Christensen of Bellevue in 2014.

“I wanted to give it a go and put a lot of effort into it while I was able to,” Cernik said. “It could just have been some good luck this year.”

Cernik said it took about two hours every day during peak growing season to nurture his pumpkins, time that he and his wife, Whitney, won’t have when 4-year-old William and 2-year-old Rose start getting involved in sports and other activities.

So, after catching the bug from the publicity surrounding Christensen’s record and perfecting his techniques, he figured this was the year to go all out. He finished with a pumpkin that was about 5 feet across and 40 inches tall. The circumference is almost 14 feet.

“Many times, I questioned why I was doing this as I worked into the evenings,” he said.

Cernik, 33, didn’t just throw a few pumpkin seeds into his garden. He carefully amended the soil and then planted four Atlantic Giant seeds in mini greenhouses that he built just for them. The pumpkins grew on four-by-four plywood sheets so they would have nice flat bottoms. The plywood also kept rodents away.

Every day he pruned, irrigated, fertilized and took tissue samples to make sure his pumpkins were getting the right nutrients. The blankets kept the skin from hardening.

He fretted about the weather, too. Was it too hot during the day (pumpkins don’t like high heat and humidity) or too cool at night (which would slow their growth)? A hailstorm occurred late enough into the growing season that all his work wasn’t destroyed.

“You are very much babying them,” Cernik said.

It’s not easy to grow big pumpkins in Nebraska. Conditions in places such as Wisconsin and the New England area are much more conducive to giant pumpkins. That shows in the size of their pumpkins, which can weigh about 2,500 pounds. The world record is 2,624 pounds for a pumpkin grown in 2016 in Belgium.

The biggest pumpkin at the Saturday pumpkin show was the Iowa state record, 1,800.5 pounds.

Two of Cernik’s pumpkins didn’t make it through the growing season, coming down with some type of fungus in July that stopped their growth. But on the good side, he said, that lightened his workload.

Finally, on Sept. 30, with the help of his dad, Paul, and a skid loader, he moved the biggest pumpkin into his garage to keep it dry and to make sure it lasted until Saturday. The other giant pumpkin weighed an unofficial 1,227.

Cernik carefully strapped the largest pumpkin into the bed of his pickup for the five-hour drive to Anamosa. It was fun, Cernick said, to see the joy on people’s faces as they watched a monster pumpkin being driven down the highway.

He won $300 for his pumpkin, fifth-largest at the show. He figures it cost him about $1 a pound to grow. An Omaha nursery may display it or he might just park it in his front yard for everyone to gawk at.

It may seem like a crazy hobby, he said, but he used to spend hours playing golf with no chance at a state title.

“I think it’s kind of cool to choose a goal and accomplish it,” Cernik said. “It took a lot of hours, and am I going to take a break next year? Probably.”

Cernik missed his big moment at the show when judges declared how large his pumpkin was and affixed a piece of paper to it, saying it was a Nebraska state record.

'They are almost like paintings out of cloth': Nebraska fabric artist finds inspiration in her travels

Peg Pennell's works of art will be featured at Nebraska State Quilt Guild event in Kearney next weekend.