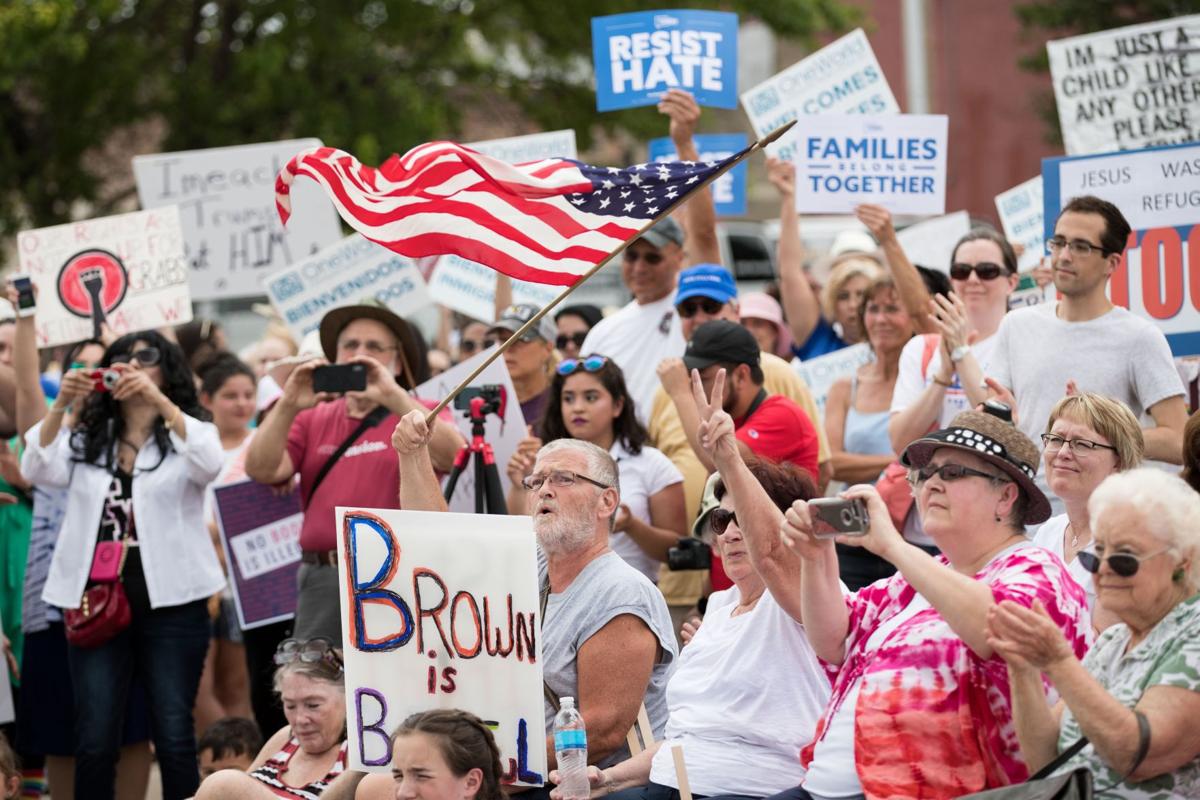 Tim Wilger waves an American flag at the protest at the Plaza de la Raza. 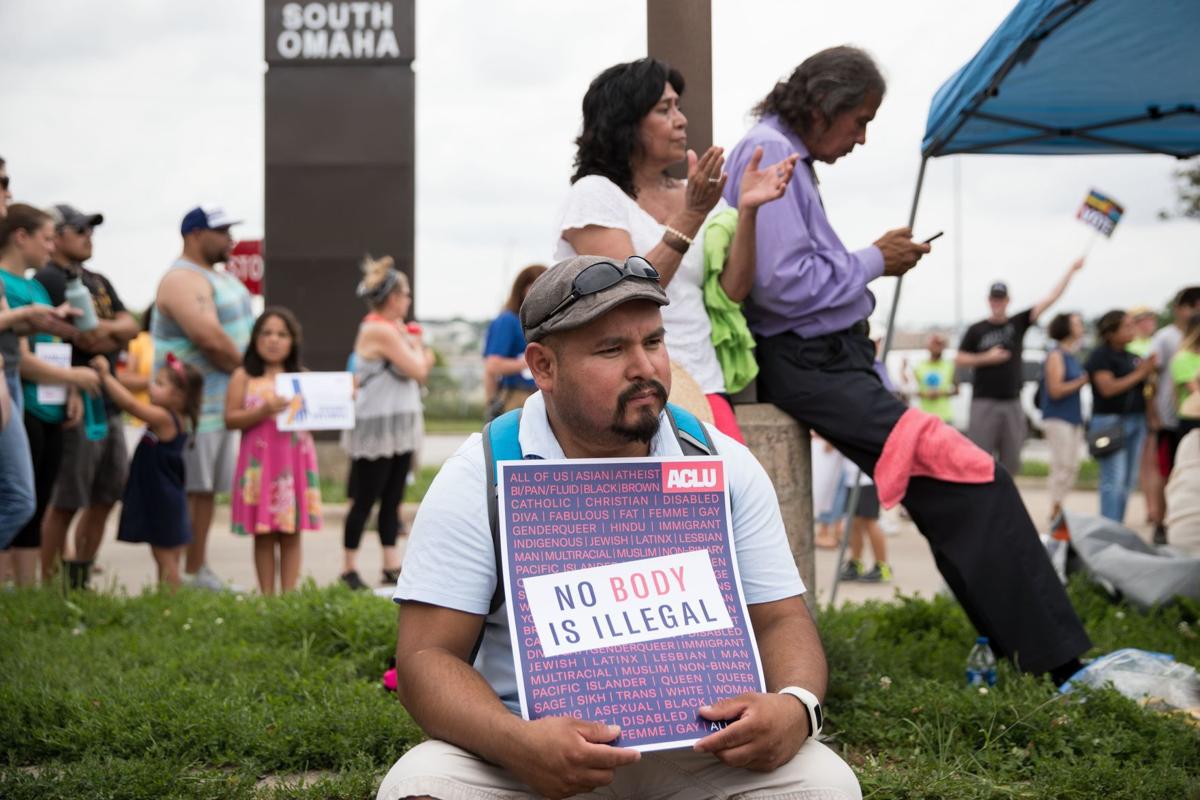 Cesar Tadeo joins others in South Omaha on Saturday to protest the “zero-tolerance” policy that led to immigrant children being separated from their parents. 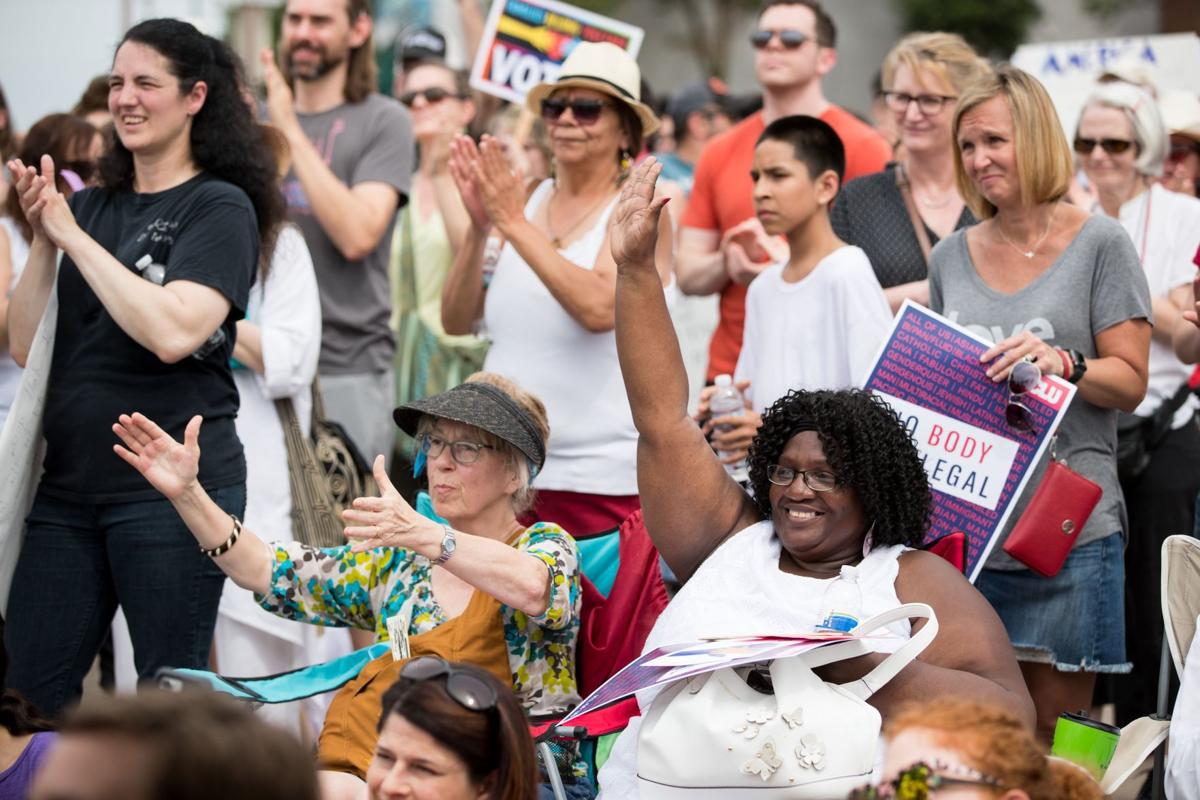 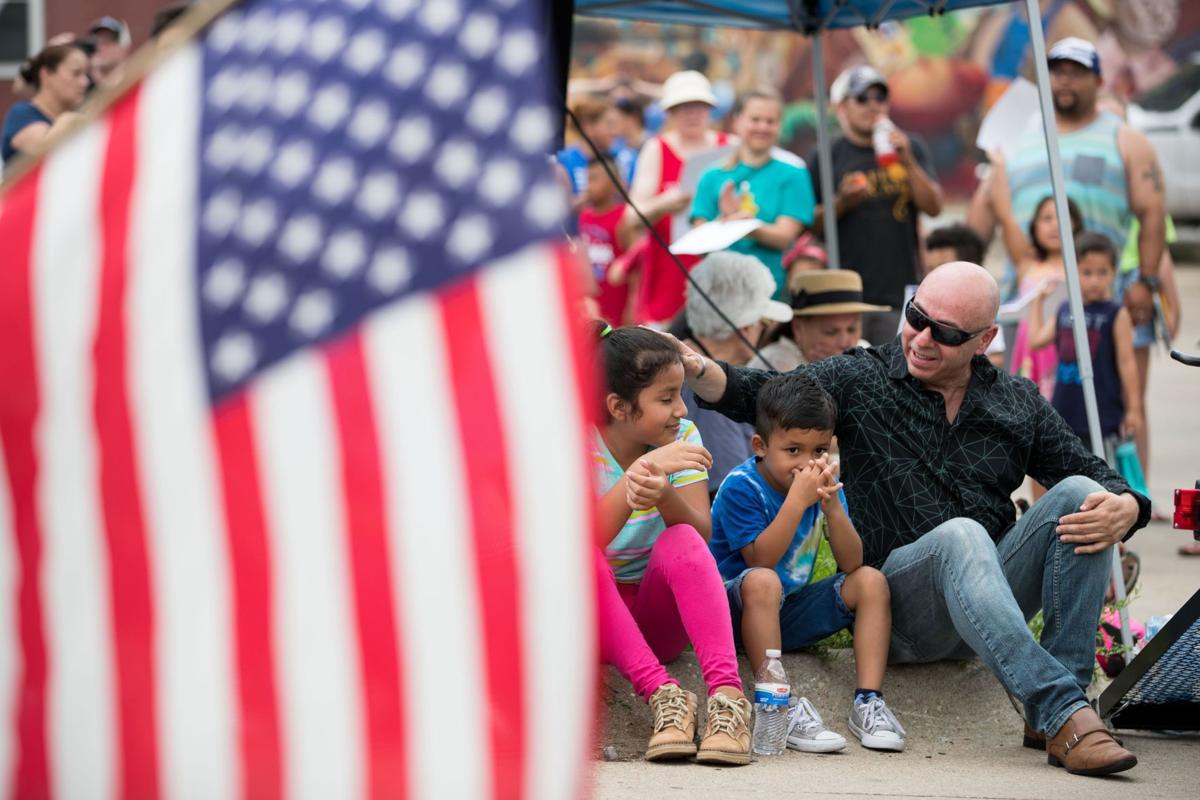 Juan Carlos Velos, with Surizaday Alvarado Villegas and her brother Iker, joined a crowd at the Plaza de la Raza in South Omaha on Saturday demanding the reunification of immigrant children with their parents. The children’s father was separated from Surizaday and Iker for four months. With the help of the Omaha Area Sanctuary Network, the family was reunited. 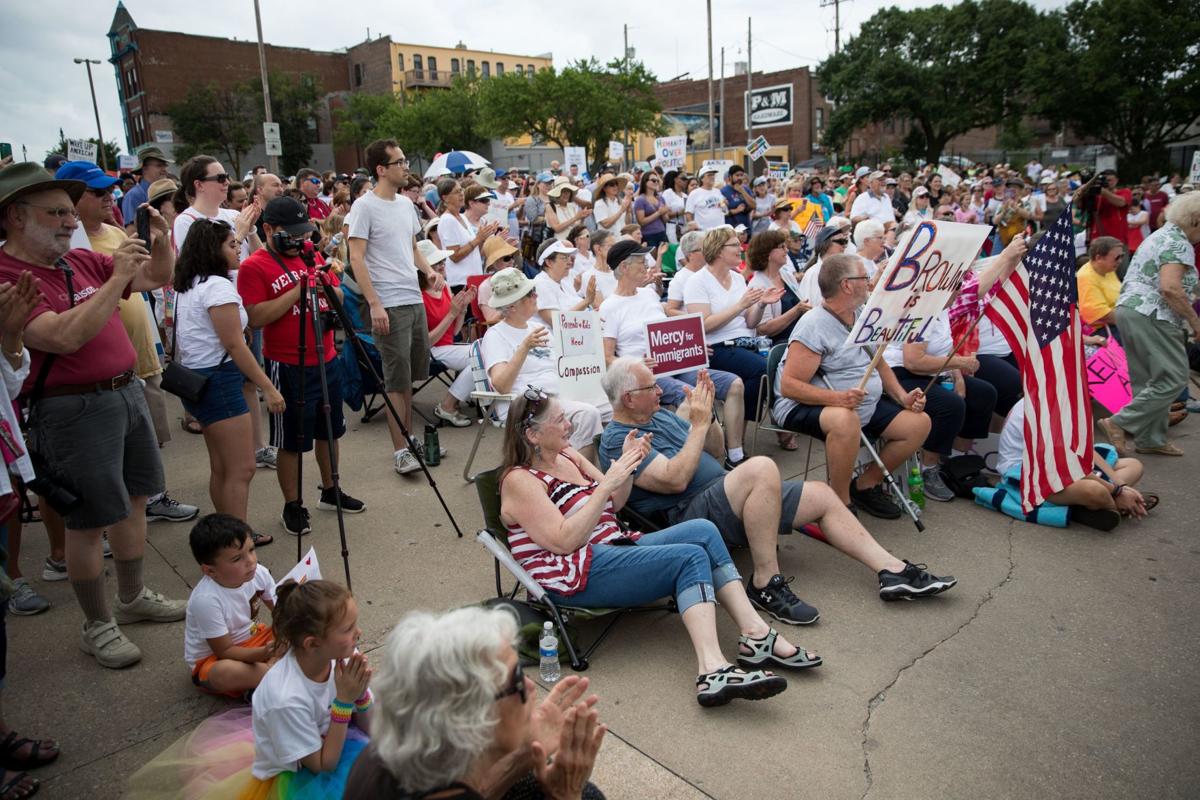 Tim Wilger waves an American flag at the protest at the Plaza de la Raza.

Juan Carlos Velos, with Surizaday Alvarado Villegas and her brother Iker, joined a crowd at the Plaza de la Raza in South Omaha on Saturday demanding the reunification of immigrant children with their parents. The children’s father was separated from Surizaday and Iker for four months. With the help of the Omaha Area Sanctuary Network, the family was reunited.

Every night it’s the same. Lucia Pedroza is startled from sleep feeling hopeless after dreaming of her children being taken from her.

The stuff of her nightmares is reality for families affected by recent immigration policy that has separated children from their parents.

Pedroza, who attended a Saturday protest, watched her 8- and 9-year-old boys run through the parking lot playing with their cousins. She looks at them differently now.

“I can’t look at them without thinking about the other kids that are being taken from their parents,” Pedroza said.

The young mother was one of about 500 people who gathered on a hot, humid Saturday afternoon in the Plaza de la Raza in South Omaha for the “Families Belong Together” protest. Their voices joined thousands of others in cities coast to coast who rallied to protest the separation of immigrant families trying to enter the country without authorization.

The nationwide day of activism comes after weeks of debate about President Donald Trump’s “zero-tolerance” policy that, since its establishment in May, has separated more than 2,000 children from their parents at the U.S.-Mexico border.

On June 20, Trump signed an executive order reversing the policy and a federal judge in California on Tuesday ordered that all families be reunited within 30 days. Still, as many as 2,000 children remain in detention centers.

“The crisis is not over until every single child is reunited with their parents,” Rose Godinez of the ACLU of Nebraska said during the Omaha rally.

Children who are separated from their parents experience “toxic stress” that can lead to long-term health and mental health issues, said Kristine McVea, a doctor and the chief medical officer of One World Community Health Center.

The crowd pressed in toward the stage, holding signs with phrases like “Stop tearing families apart,” “Abolish ICE” and “Children are not pawns” while listening to religious and other community leaders echo similar messages about the cruelty and immorality of family separation.

Other rallies across the state took place in Alliance, Chadron, McCook, Scottsbluff and Lincoln, according to MoveOn, the online platform that showed rallies organized in all 50 states.

A crowd of about 1,500 gathered outside the State Capitol building at 10 a.m. in Lincoln with no incidents, said Sam Sowl, the event’s volunteer coordinator.

“People saw a need and they stood up,” Sowl said. “That’s invaluable to our state.”

Miles Bannan, vice mayor of Chadron, a city of about 5,700 in the northwest corner of Nebraska, said about 75 people participated in the town’s rally. Local pastors gave speeches and protesters held signs along the highway. Some drivers flashed thumbs-up while others honked in disapproval, he said.

In a place where people are expected to “fit a certain mold,” Bannan said, he was encouraged by the strong showing of people.

“This is something that I feel crosscuts so many different parts of society, different demographics, different people,” Bannan said.

The rally was organized by Indivisible Chadron, a local chapter of a national political movement organized after the 2016 election to encourage activism and support progressive causes. Bannan said he hopes the rally helps progressive locals feel less afraid to express their beliefs.

“I think that a big impact of this is reminding people that they’re not alone in these beliefs,” Bannan said.

The Omaha rally was nonpartisan, but many speakers urged those gathered to use their voice to vote.

Pedroza, whose family fled violence and poverty in Guatemala to come to America two decades ago, said she is proud she and her family are now U.S. citizens. And she is using her voice to combat the hopeless feeling she wakes up to.

“With the power that we have, we plan to use it in November,” Pedroza said to a cheering crowd. “Now is not a time to give up. Right now is the time to fight, the time to do something. We can’t do it on our own. We need all of you, we need all your families. Everybody can do something.”

Pedroza’s message of hope was echoed in the lyrics of a song by American civil rights activist Cesar Chavez. Singing was led by three young children onstage.

I was separated from my mother. Here's how I talk to my son about what's happening today.

"I thought of things I could do with my kids that might make a difference."

What is there no one at these rallies that represented the other side ? What did they have to say ? Where is the fair reporting in the story ? What about all the rest of us that didn’t go to the rally what is our feelings ? What would you say was the percentage of one versus the other ? Again reporting is lacking there for nothing said is worth reading.

The Omaha World Herald isn't interested in presenting "the other side". They are busy crafting a narrative that suits them, and the truth be damned. This is Standard Operating Procedure for most "news" reporting businesses today.

There were a lot, lot more than 500 people there. Some estimates were over a thousand, some 850. A lot of people came in and went out at various times. It was a very hot day!

People who come here without lawfully entering the country are illegal immigrants, plain and simple. If you cannot obey the law to come here, why should I believe that you are going to be a good citizen and obey the laws of this land? Sorry, I do not want you here unless you are here legally and have made the effort to do so and abide by that decision. Why, if it is so bad at home with your claims of gangs, abuse, etc. do you not just go to another part of your country or to closer countries than the long trek here? Why? Because where else will you be able to stand in line and accept the generosity of someone else's hard work and have it given to you for free. Go home, quit dragging your kids here, if you do not do so legally, then consider our border shut and if you do get in, you will be sent packing. I would gladly volunteer for such a job, fed up with everyone who wants something for nothing. We have enough baby producers to support in this country already.

Now, if your words are not the words of a bona fide hate filled racist, I do not know what is.

I certainly don’t like separating families...parents from their kids. Even, under illegal entry probably not the right thing to do. However, where are all these protesters when it comes to legalized abortion. This is where parents and their children are separated forever and the kids were victims with no say in the matter.
This is where these protesters remain silent and are hypocrites !