WASHINGTON — The two books Sen. Ben Sasse has written in office are paying off for him. The Nebraska Republican received $601,276 in royalties, according to his 2018 annual financial disclosure report filed Tuesday.

That’s more than three times the $174,000 annual salary that Sasse receives as a U.S. senator.

It’s an eye-catching figure that’s sure to give new life to complaints from critics who say that Sasse is more focused on his writing career than his day job representing Nebraska. 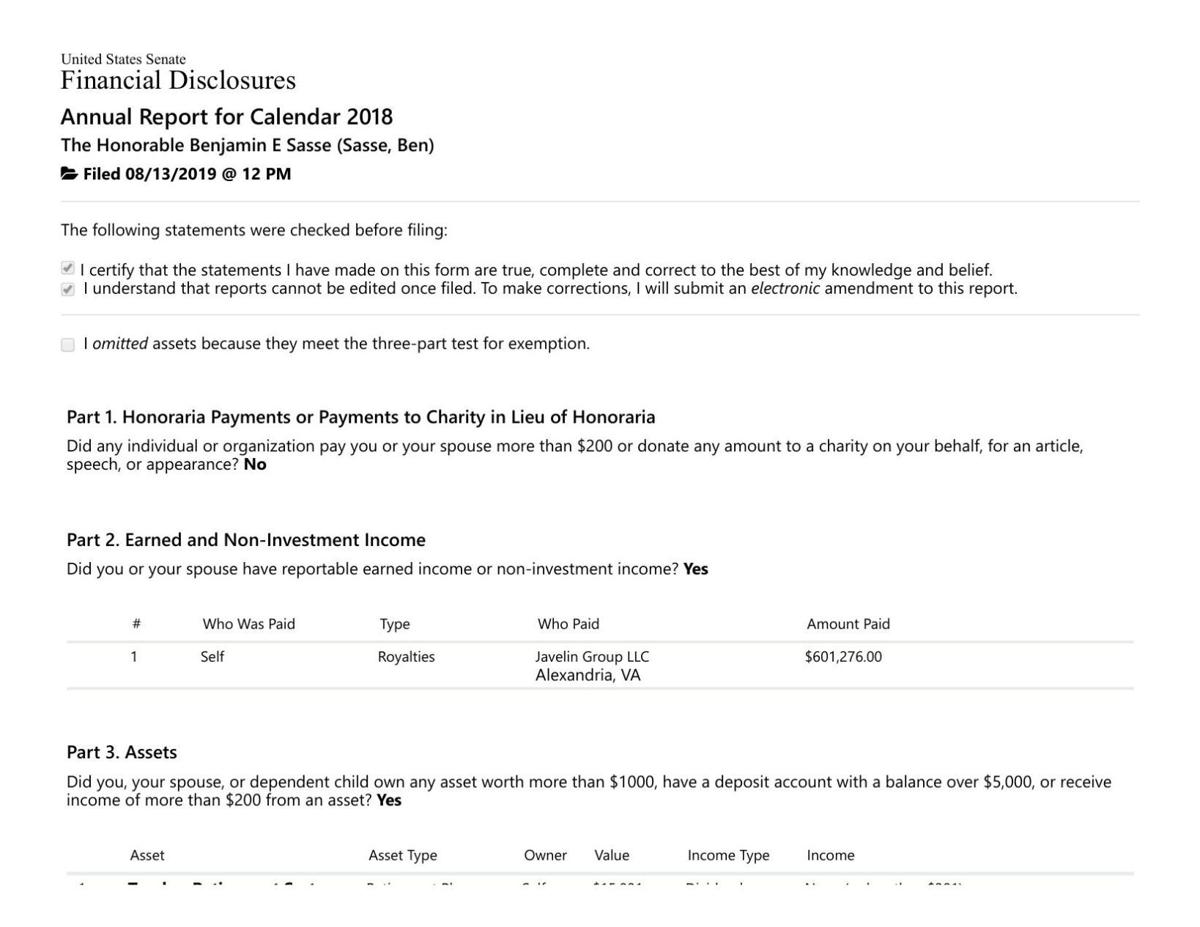 Sasse was first elected in 2014 and recently announced that he will seek a second term in 2020.

“Instead of making sure that the trade wars end and that we actually make health insurance more affordable for families, he’s busy traipsing around the country making over half a million dollars on his book,” Kleeb said.

Sasse has been the subject of such criticisms previously. After his first book was published, spokesman James Wegmann defended Sasse’s record and called such complaints silly and partisan.

In a statement Tuesday, Wegmann said “Sasse has written from 4 to 7 a.m. daily for twenty years, and his writing on raising kids and the toxicity of politics has obviously connected with a lot of Nebraskans.”

The royalties came to Sasse via literary agent Javelin Group, based in Alexandria, Virginia, according to the report.

It also details agreements with publisher St. Martin’s Press that refer to royalties ranging from 7.5% to 25%.

The report notes four Sasse trips that were paid for by St. Martin’s in October and November involving travel to either New York or Washington, D.C.

Those trips were related to promoting his 2018 release “Them: Why We Hate Each Other — and How to Heal.”

It was not immediately clear how much of the 2018 royalties represent an advance on his latest book and how much are from the sales of his first one, “The Vanishing American Adult.”

That book stemmed in part from his time as president of Midland University and focused on the importance of fostering self-reliance and a strong work ethic in young people.

U.S. House members and senators have to file financial reports every year disclosing significant transactions, earned and unearned income, assets and liabilities and travel paid for by outside groups.

Lawmakers are allowed to report holdings in broad ranges, however, which means putting an exact figure on their net worth is virtually impossible.

The most valuable of those assets is a Victorian town house on Capitol Hill listed between $1 million and $5 million.

Sasse paid $926,000 for the house in 2017. Wegmann said at the time that the senator planned to make it a part-time rental property.

Sasse reported receiving between $5,000 and $15,000 in revenue from the property last year. The report does not detail who rented the house and made those payments.

As for liabilities, Sasse reported a mortgage of $500,000 to $1 million with the State Employees Credit Union in Maryland.

“Too many of Epstein’s secrets have gone to the grave with him, and the department must not allow his death to be one last sweetheart deal for his co-conspirators,” Nebraska Sen. Ben Sasse wrote to Attorney General William Barr on Tuesday. Sasse is chairman of the subcommittee that is supposed to provide oversight of the Justice Department.

The Koch brothers probably bought all of Sasse's books. They foolishly bankroll his career. Also we are sick of Sasse lecturing to us. He claims to know the secret to raising kids. I bet a dollar to a donut that his kids grow up to be juvenile delinquents, since he home schools them.

Typical Rhino. Why everyone loves Trump.

I fail to see why this is an issue for anyone, other than partisan complaining.

Please keep in mind Sasse not only writes books, he attended Oxford University and was president of a university. With that in mind, Sasse is the smartest Nebraskan alive and knows better than all of us and is always right. In reality, he is the type of person we do not need in Washington D.C. You see, he represents his own interests and completely ignores the interests of others and rejects alternative ideas.

Agreed. Sasse not only is the smartest person in the state, he is Nebraska's biggest phony as well.