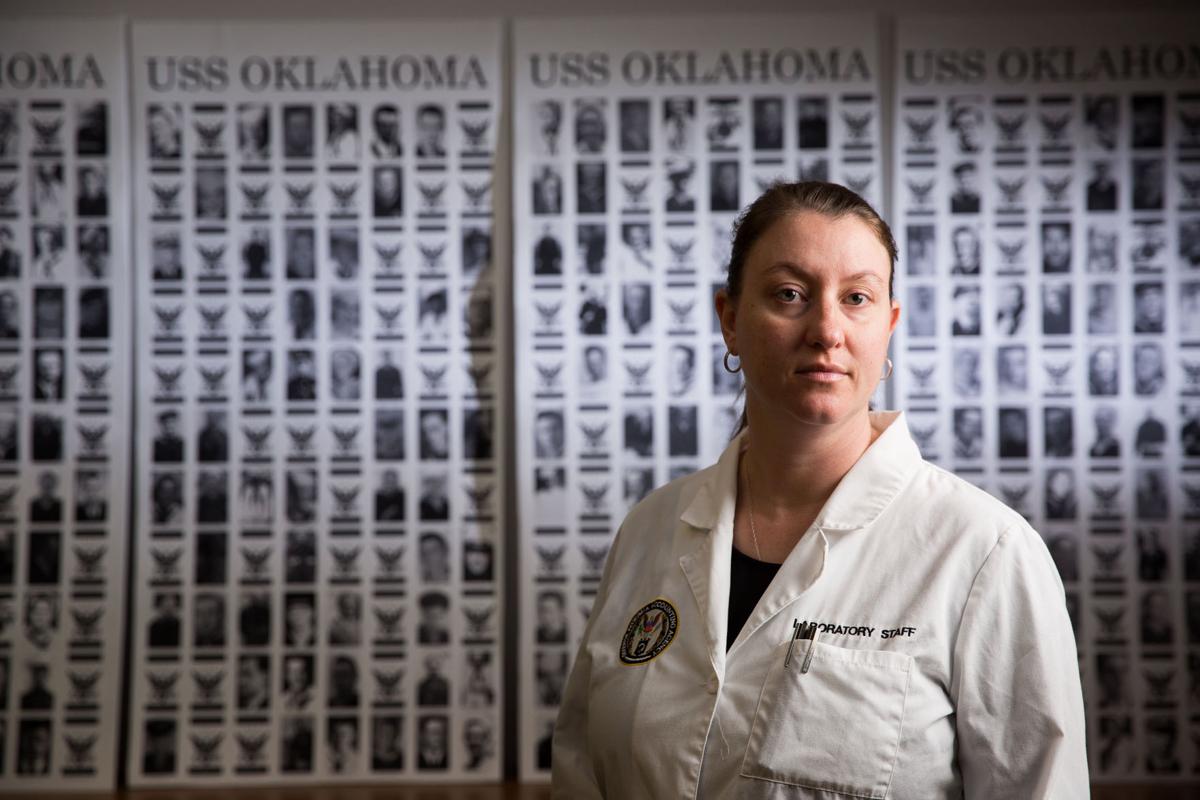 Dr. Carrie Brown leads a team of anthropologists working to identify remains of the men from the USS Oklahoma who died at Pearl Harbor. 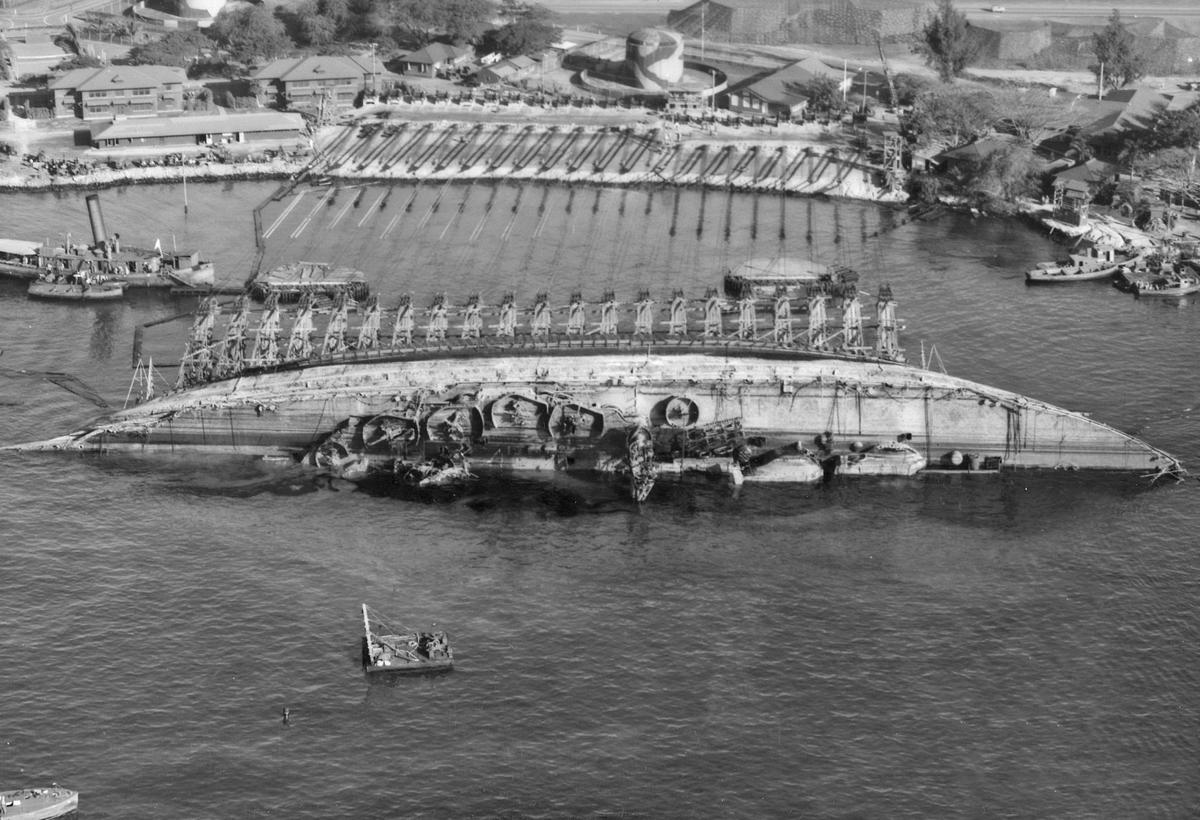 The USS Oklahoma is pulled upright after the attack on Pearl Harbor. 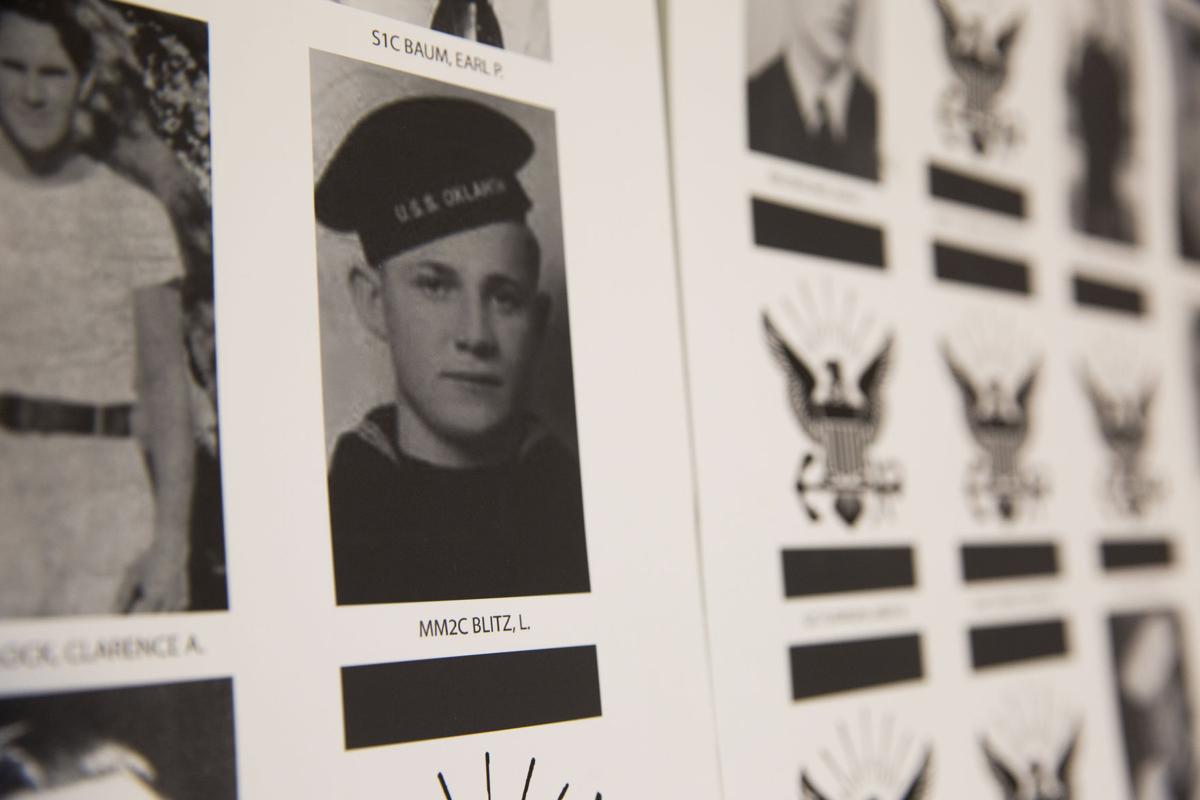 A photograph of Leo Blitz, a 20-year-old from Lincoln who was killed on the USS Oklahoma when the Japanese attacked Pearl Harbor. 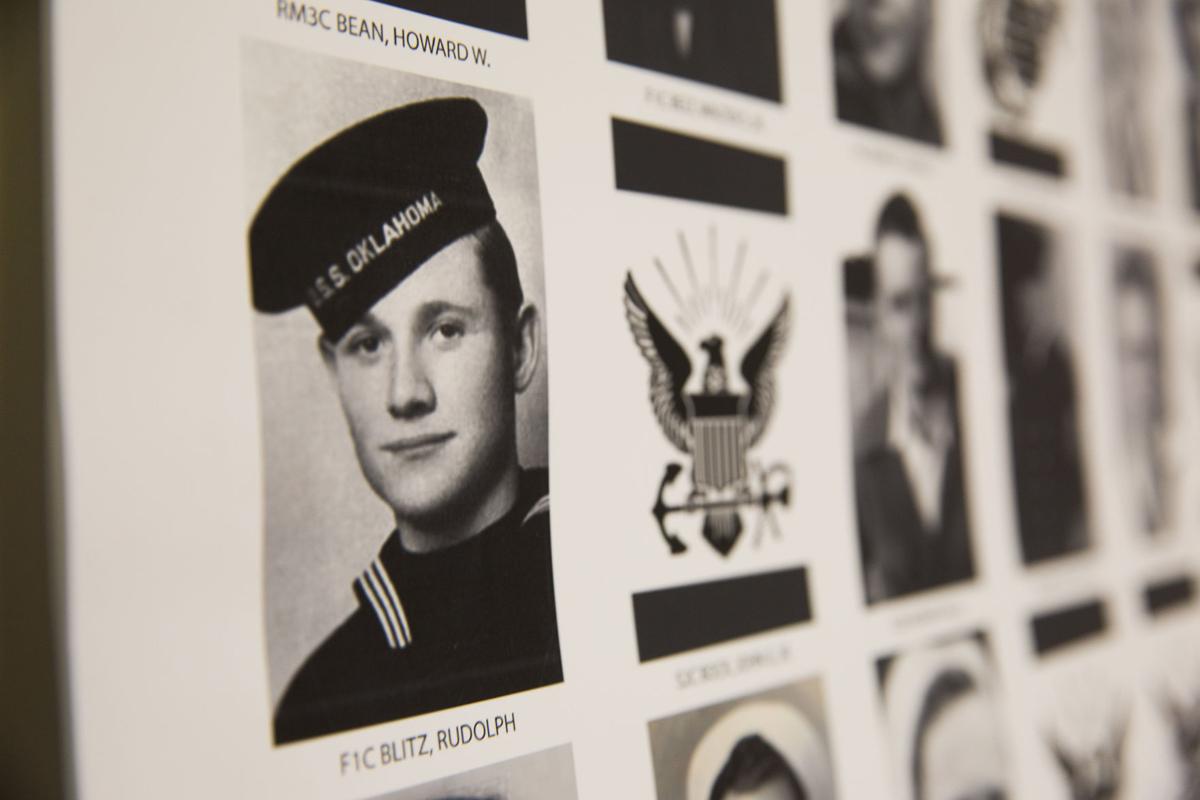 A photograph of Rudolph Blitz, who was killed on the USS Oklahoma during the attack on Pearl Harbor. His identical twin brother also died on the ship. Anthropologists say they aren't sure how they will be able to distinguish their remains because their DNA is identical. 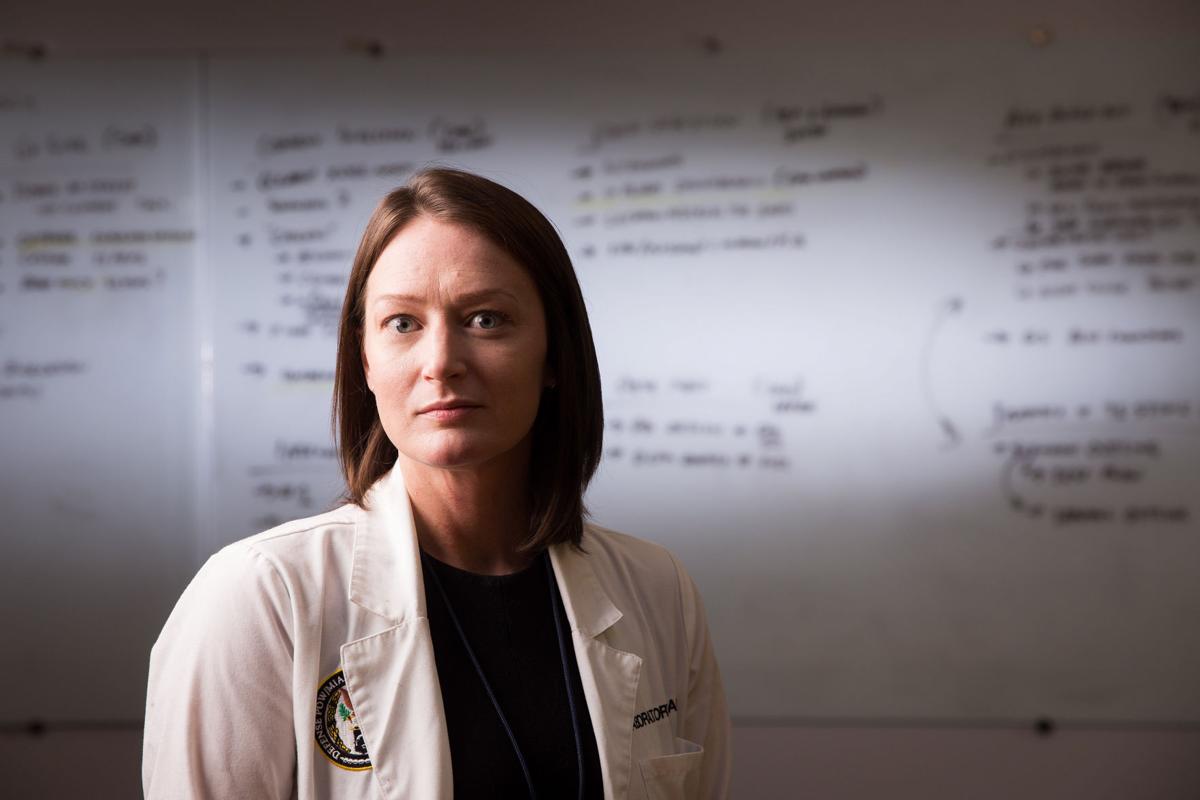 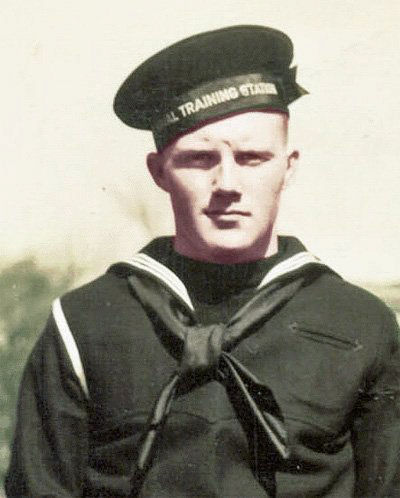 Exira, Iowa, native Eli Olsen was identified in September. His family plans to bury him in his hometown, next to his brother.

Dr. Carrie Brown leads a team of anthropologists working to identify remains of the men from the USS Oklahoma who died at Pearl Harbor.

The USS Oklahoma is pulled upright after the attack on Pearl Harbor.

A photograph of Leo Blitz, a 20-year-old from Lincoln who was killed on the USS Oklahoma when the Japanese attacked Pearl Harbor.

A photograph of Rudolph Blitz, who was killed on the USS Oklahoma during the attack on Pearl Harbor. His identical twin brother also died on the ship. Anthropologists say they aren't sure how they will be able to distinguish their remains because their DNA is identical.

Seventy-six years after they died in the watery shallows of Pearl Harbor, the men of the USS Oklahoma finally are coming home — often to be buried next to deceased parents or brothers and sisters by relatives who know them only from faded photographs.

The Defense POW/MIA Accounting Agency’s lab at Offutt Air Force Base hit a milestone last month when it identified the 100th sailor or Marine from the big battleship.

Of the 429 men killed when the ship was struck by torpedoes during a surprise Japanese attack on the Pacific fleet Dec. 7, 1941, only 35 were identified at the time. The bones of the rest would lay for decades in 46 graves marked “Unknown” at the National Memorial Cemetery of the Pacific in Honolulu until 2015.

That’s when political pressure from Congress, as well as USS Oklahoma survivors and their families, prompted the agency to dig them up and ship them to its new laboratory at Offutt.

Since then, a team of anthropologists led by Dr. Carrie Brown, director of the USS Oklahoma Project, has separated, labeled, classified and logged nearly 13,000 human bones from about 400 people. They have sent off about 5,000 DNA samples to a Defense Department laboratory in Delaware.

The result has been a steady stream of identifications — 102 as of Wednesday, with 292 still unknown.

Only one of the 20 missing sailors from Nebraska and western Iowa has been ID’d so far. Petty Officer 3rd Class Eli Olsen of Exira, Iowa, was a storekeeper aboard the Oklahoma at the time of the Pearl Harbor attack. His identity was confirmed in September.

His family expects to bury him in his hometown — just north of Interstate 80, about halfway between Omaha and Des Moines — sometime next spring, said John Tibben of Jewel, Iowa, Olsen’s nephew.

“I’m going to try to put him next to his brother,” Tibben said.

Olsen was one of nine children born to Chris and Inger Olsen, who had immigrated from Denmark and farmed near Exira. Five boys in the family served in the military during World War II. All survived except Eli.

Gary Olsen, 70, of Exira, knew his Uncle Eli died at Pearl Harbor, but not much more than that.

“My grandfather had his picture up,” Olsen said. “In terms of talking about him — they never did.”

Tibben, 76, was born three months before the Pearl Harbor attack. His parents lived in California near where his uncle was stationed.

“Eli was down at Long Beach,” Tibben said. “He would come up to visit on the weekend. He used to bounce me on his knee.”

After the attack, Olsen’s parents received a survivor’s check from the government each month for the rest of their lives.

The family kept a burial plot for Olsen in the Audubon Cemetery, not far from Exira, for years, just in case. Eventually, another relative was buried there. Instead Eli Olsen is memorialized on his parents’ gravestone.

About four years ago, a forensic genealogist working for the Navy tracked down the family.

Ruth Tibben, who was Eli Olsen’s last living sibling, did too. But hearing his name brought back painful feelings.

“Mother said, ‘I don’t want to know anything about it. I’ve put that behind me,’ ” John Tibben recalled.

Ruth died in April, at age 100. She was buried in the Exira Cemetery. Soon, the brother she loved will be buried near her.

He won’t be the last. Carrie Brown is currently reassembling numerous USS Oklahoma skeletons on tables in the Offutt lab, built around bones identified through DNA testing. She said these will be the next official identifications.

“We’re being very successful with the process,” Brown said. She said the Oklahoma Project is expected to continue for another three years.

Among the Nebraskans still unaccounted for are Leo and Rudolph Blitz, 20, identical twins from Lincoln who both died aboard the Oklahoma. Their bones are presumably among those awaiting identification in the Offutt lab.

Brown said their case presents a puzzle for anthropologists, because their DNA is identical. In life, they looked so much alike that they sometimes traded places on dates. It’s not clear whether anthropologists will be able to tell the twins apart in death.

“I am looking forward to seeing how we can sort them out,” Brown said. “This will be the first time we’ve had to do that.”

The USS Oklahoma represents the second-largest group of Pearl Harbor victims after the USS Arizona. Most of the 1,177 sailors and Marines who died on the Arizona are permanently entombed within the battleship’s hull at the bottom of the harbor. It is a national memorial and will remain permanently undisturbed.

But the missing from two other Pearl Harbor battleships are expected to be identified soon.

In the past year, the accounting agency has disinterred 35 graves believed to contain 38 sets of remains from the USS West Virginia. Only 25 of its sailors are unaccounted for, so agency officials believe the graves may contain the remains of sailors from other ships who died on the West Virginia.

These bones are currently being inventoried at the agency’s main laboratory in Hawaii. No identifications have been announced.

Maj. Jessie Romero, a spokesman for the agency, said permission is expected soon to disinter 25 graves tied to the USS California. Twenty sailors remain missing from that ship.

The 49 USS Oklahoma identifications fueled the biggest year yet for the accounting agency. Officials said 201 missing or unknown service members were identified during the fiscal year that ended Sept. 30.

It is the first time the agency has met a goal set several years ago by Congress of at least 200 identifications per year. The accounting agency’s budget is $131 million.

Of the 429 sailors and Marines who died aboard the USS Oklahoma in the Pearl Harbor attack of Dec. 7, 1941, all but 35 were initially unidentified. Twenty of those killed were from Nebraska or western Iowa.

Just one of the Midlands service members has been identified since the Defense POW/MIA Accounting Agency opened the graves in 2015: Petty Officer 3rd Class Eli Olsen, 23, of Exira, Iowa, who was a storekeeper aboard the Oklahoma when it was sunk at its pier by eight Japanese torpedoes.