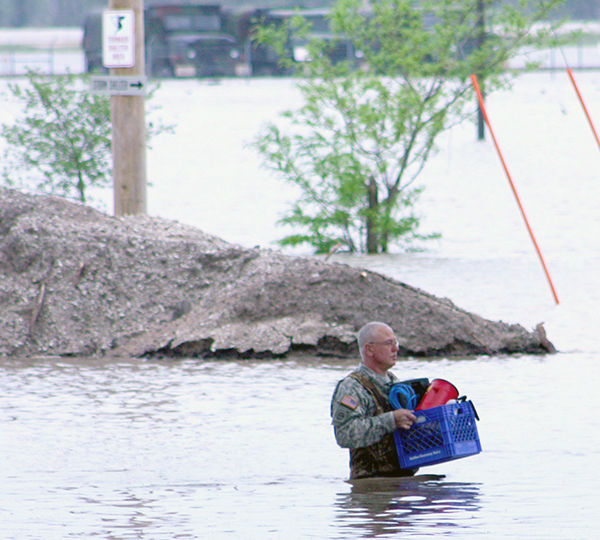 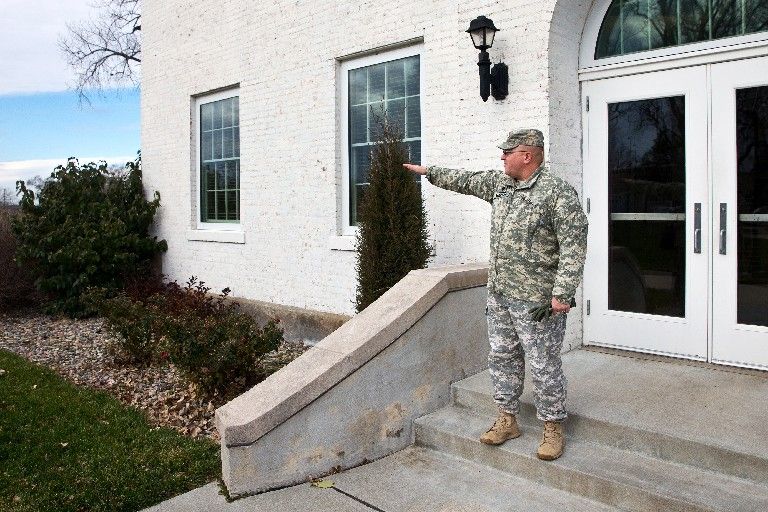 Lt. Col. Shane Martin points out areas where flood waters cover Camp Ashland training center while standing on the steps of Memorial Hall. Flooding in May covered much of the area and came up to the step Martin is standing on. 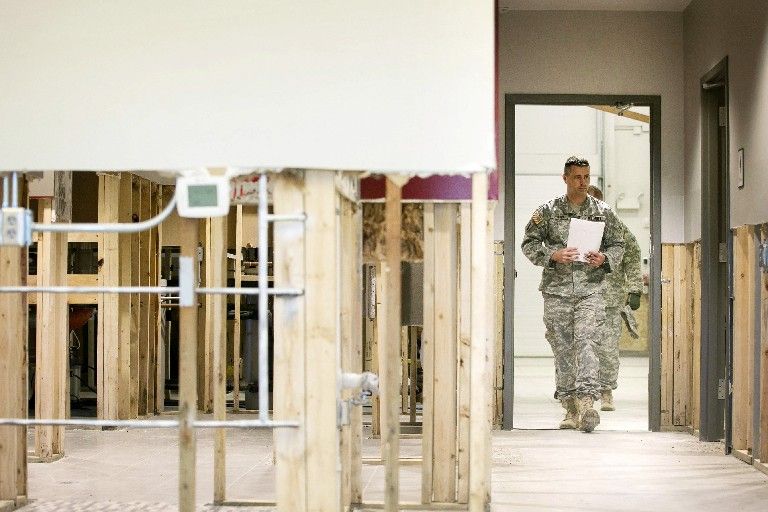 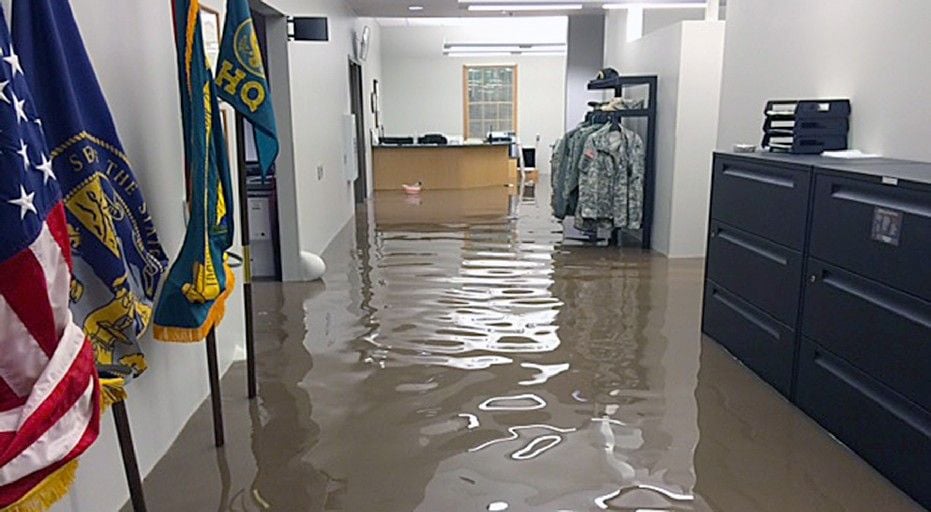 Muddy flood water fills a hallway in the Training Center Command headquarters at Camp Ashland after a May 7 thunderstorm caused significant flooding. 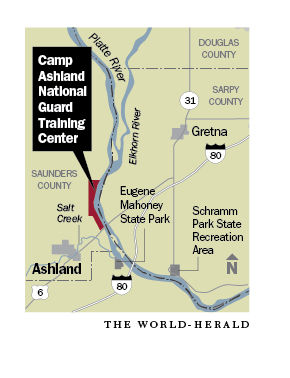 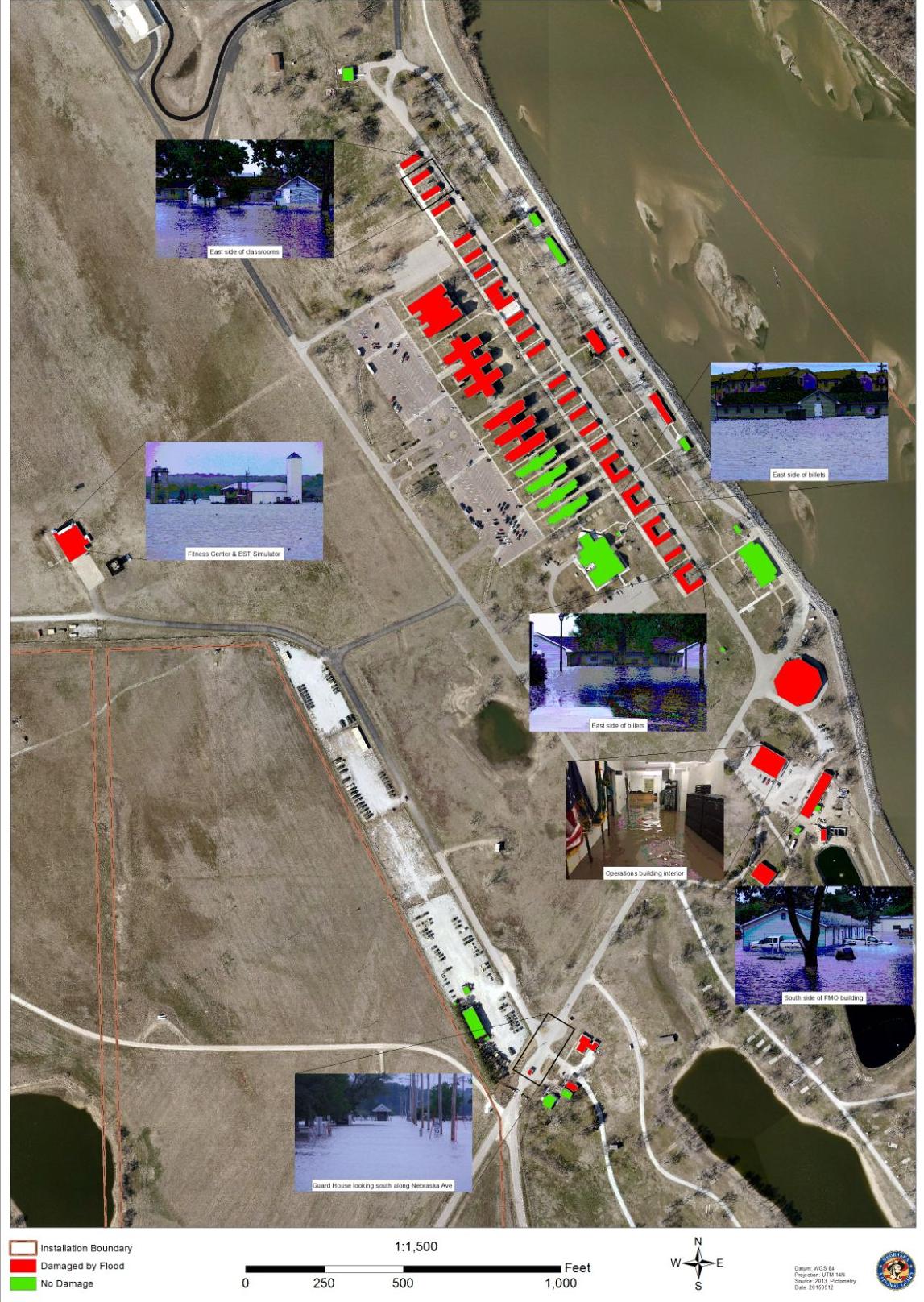 Aerial photo of Camp Ashland showing affected buildings and photos from the may 2015 flood. (Larger version)

Lt. Col. Shane Martin surveys a training center building in Camp Ashland where the ruined floor has been demolished.

Lt. Col. Shane Martin points out areas where flood waters cover Camp Ashland training center while standing on the steps of Memorial Hall. Flooding in May covered much of the area and came up to the step Martin is standing on.

Muddy flood water fills a hallway in the Training Center Command headquarters at Camp Ashland after a May 7 thunderstorm caused significant flooding.

Aerial photo of Camp Ashland showing affected buildings and photos from the may 2015 flood. (Larger version)

CAMP ASHLAND, Neb. — The Nebraska National Guard is spending $3.7 million on repairs after a record-setting deluge in May flooded its sprawling training center southwest of Omaha.

“It was water — everything as far as you could see,” Lt. Col. Shane Martin said with a sweep of one arm as he surveyed the now-dry camp last week. “The whole place looked like a big lake.”

The damage followed a once-in-a-thousand-years storm that drenched southeast Nebraska, dumping up to 11 inches of rain in the Salt Creek watershed in just a few hours. The creek empties into the Platte River about a mile from Camp Ashland.

Water swirled around most of the camp’s buildings and rose three feet deep in some of them.

Seven months later, the inundated buildings are being rebuilt with waterproof siding and floodgates on the doors to make them flood-resistant in the future. The repair work is expected to be finished in July.

“It’s a great opportunity for us to make the buildings more functional,” said Martin, the Guard’s construction and facilities management officer. “Hopefully, it’ll keep all these buildings essentially dry.”

In the May storm, the heaviest rain fell south of Lincoln, not at Camp Ashland. But the downpour caused the greatest flow of water in Salt Creek since records were first kept in 1908, officials of the Lower Platte South Natural Resources District said.

Most news coverage at the time focused on hard-hit places such as the Saline County town of DeWitt, which had to be evacuated, and Jefferson County’s Fairbury, where a woman drowned in her basement. For months, almost no one outside the Guard knew about the widespread damage at Camp Ashland.

Flooding was nothing new at the hundred-year-old camp, which hugs the Platte River 25 miles from Omaha. Martin said his car was damaged in serious flooding there in July 1993, the last major flood at the site. Levees built by the U.S. Army Corps of Engineers offer protection from winter ice jams on the Platte.

The levees held firm against the Platte. But the spring deluge overwhelmed a Salt Creek tributary that runs along the base’s south border. The levees on the east and a railroad bed parallel to U.S. Highway 6 on the south forced the water north into the camp.

“It was like a bathtub. It just slowly filled up,” Martin said. “It was such a surge, the water didn’t go out the drain fast enough.”

Between 80,000 and 100,000 National Guard, active-duty and Reserve service members train at Camp Ashland each year, from neighboring states as well as Nebraska. Many units perform their weekend and annual drills there.

On a typical weekday, about 300 service members are training there, said Master Sgt. Dennis Krecklow, Camp Ashland’s operations and training specialist. The number can top 1,000 on weekends.

But on May 7, a Thursday, only a few dozen soldiers were at the site for a truck-driver training course. That saved Guard officials from having to organize a large-scale evacuation through the rising floodwaters.

“They’d just graduated a class the day before,” Krecklow said.

All but essential personnel left before the flood peaked. The floodwaters rushed into Building 23, an old barn that had been remodeled just six months earlier into headquarters offices. So the staff moved about 100 yards to Memorial Hall, the main meeting center that was built soon after World War I and stood a few feet higher. They donned hip boots and used boats to rescue critical equipment.

“They did a darn good job considering they had only a few hours and only a few people,” Martin later told the Nebraska Guard’s Prairie Soldier newspaper.

Luckily, the water never lapped higher than Memorial Hall’s front porch, though the building appeared to be an island in a sea.

A new dining hall escaped damage, as did several newer barracks that had been built on stilts. But water poured into many of the Depression-era barracks and classroom buildings, as well as a concrete amphitheater that dates to the early 20th century and once drew people from Omaha and Lincoln for boxing matches.

Krecklow said the water rose slowly enough that no lives were endangered, and Camp Ashland was never abandoned. It took about three days for floodwaters to recede.

Once they did, the National Guard soldiers returned to find a stinky, mucky mess. Thick mud had to be squeegeed and pressure-washed out of the flooded buildings, and ruined furniture and carpeting thrown away. Old pine siding on some of the barracks was saturated beyond repair.

Of the camp’s 58 buildings, 49 were damaged. Twenty-three required major renovation. Seven more needed remediation from mold buildup or the threat of it.

Some Camp Ashland personnel had to move to undamaged buildings on the base, or to the Nebraska National Guard’s Lincoln headquarters.

But, Martin said, a lot of things fell into place. The National Guard Bureau in Arlington, Virginia, insures all Guard facilities against natural disasters. The bureau cut a check within weeks to pay for repairs.

They were lucky, too, that the water stayed just below the tops of desks in the headquarters building, which left the remaining computers and radios intact.

Though the camp sits next to a flood-prone river and a creek, Martin said the Guard never seriously considered moving someplace else. Purchasing another site and erecting dozens of new buildings would cost tens or even hundreds of millions of dollars, he said.

“We have a lot of great historic buildings out here that we’d hate to lose,” he said. “It would be hard to replicate somewhere else.”

Instead, they focused on making the new structures stronger. Many were decades old and badly in need of upgrades.

“Some of these buildings needed some love, anyway,” Martin said. “We have so much usage of all the buildings, it’s hard to take a break unless we’re forced to.”

New wiring and outlets are being elevated a few feet above the floor, and the floors themselves are being raised a few inches when possible. The walls are being built with waterproof siding and insulation. Brackets are being installed on door frames to hold floodgates that can be put in place quickly in an emergency.

“We’re putting in some flood-control measures,” said Capt. Dustin Young, the Guard’s design and project management chief. “Hopefully when it floods again it acts like a big cooler and (the water) just rolls around outside.”

Nebraska National Guard engineers will keep their fingers crossed that historic Camp Ashland won’t suffer another historic flood for decades, or centuries. But if it does come, the reconstructed buildings will be better able to take the punch.