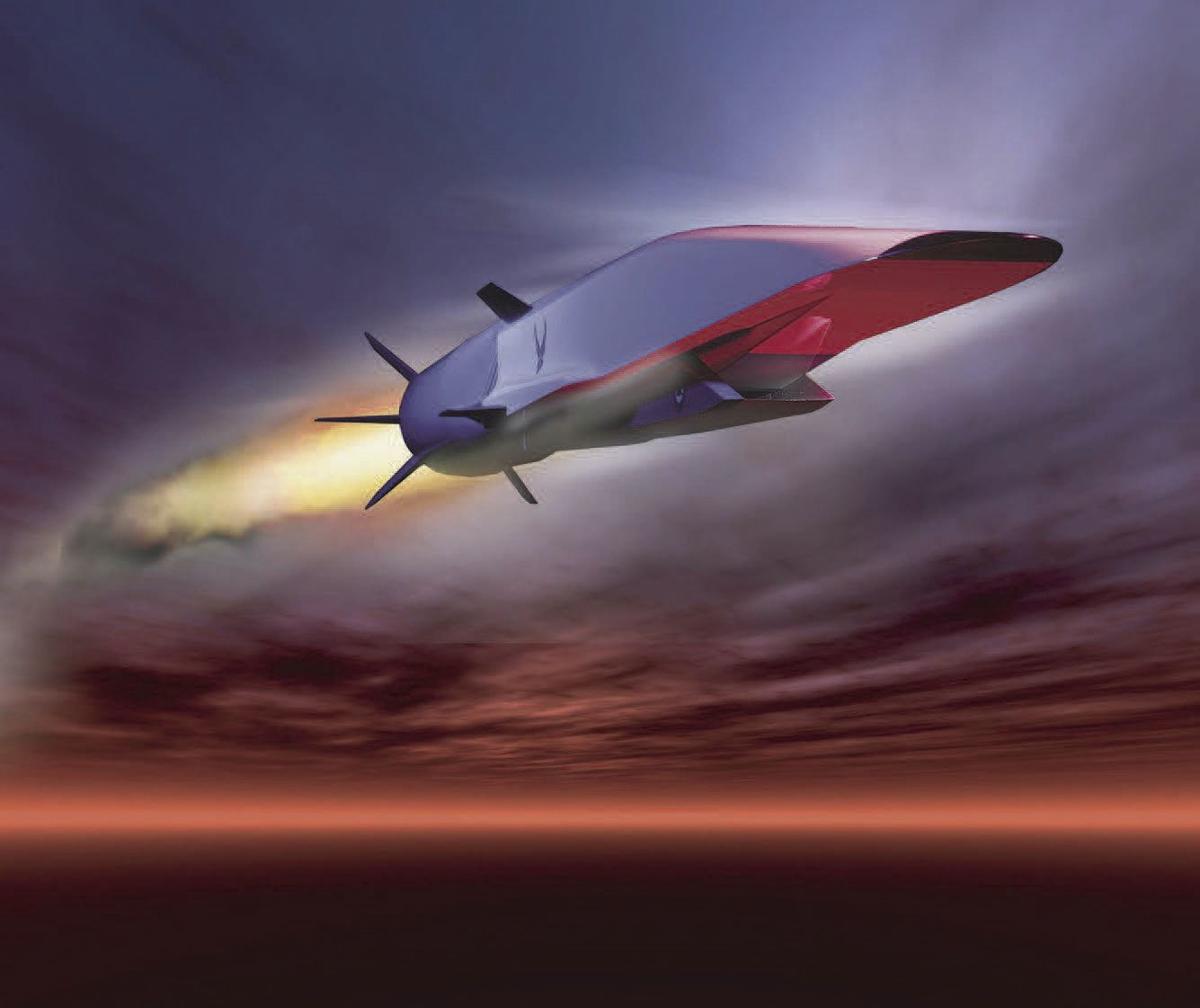 An artist’s rendering of a hypersonic cruise missile. Leaders at the U.S. Strategic Command, based near Bellevue, have raised alarms over Russian and Chinese development of the weapons, which can be difficult to track. 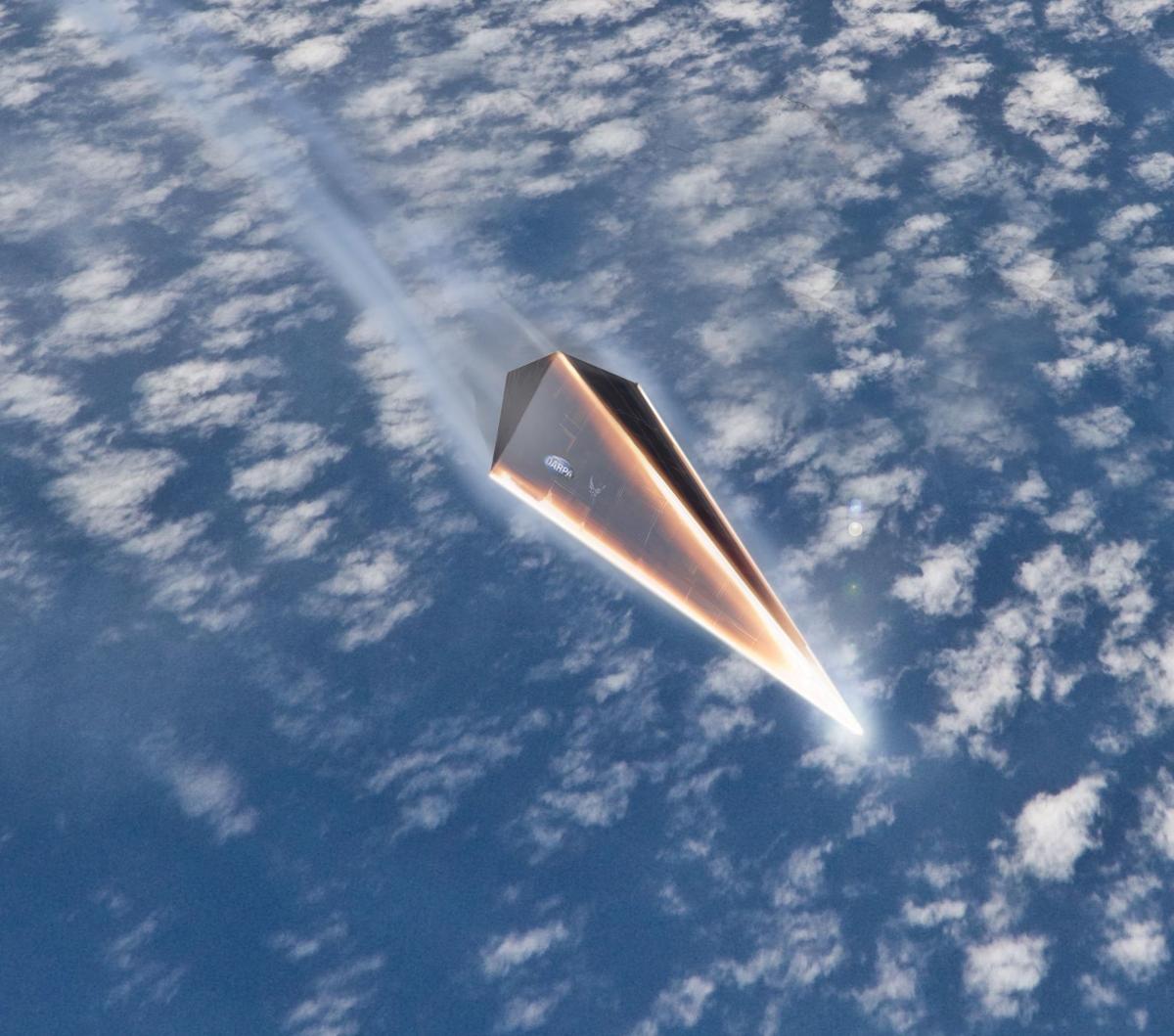 An artist’s concept of a hypersonic missile. 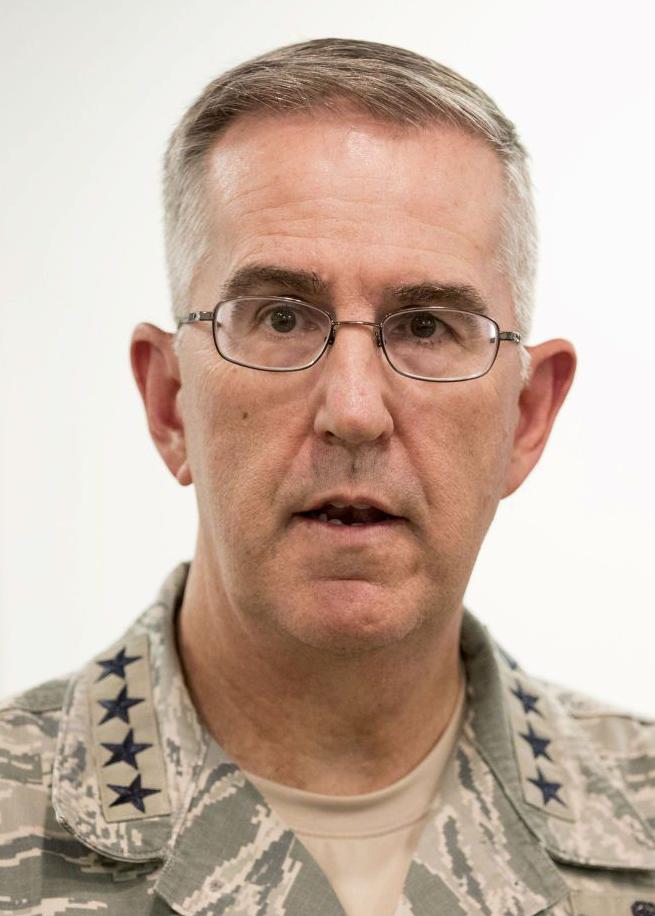 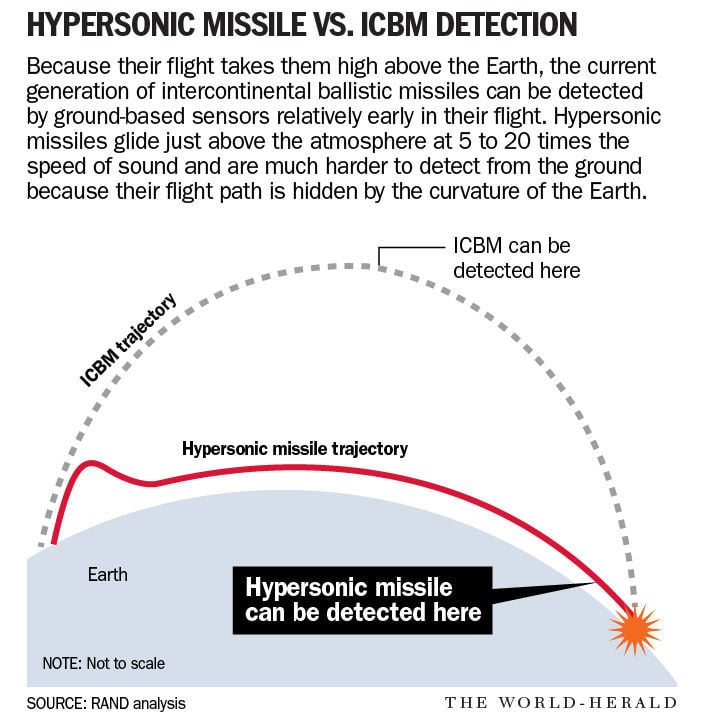 Russian President Vladimir Putin smiled slyly last month as he claimed to the world a successful test of Russia’s superfast space glider, capable of carrying conventional or nuclear weapons to their target at 20 times the speed of sound.

The leader called the 3,500-mile flight over Russia by the new Avangard missile Dec. 19 “a wonderful, perfect New Year’s gift for the country.” He boasted that “Russia now has a new kind of strategic weapon” and said it would be added to the nation’s arsenal this year.

The Avangard is the latest in a new class of weapons, called hypersonic, that can travel as fast as 16,000 miles per hour and strike targets on the far side of the world. They can be launched by rockets or from aircraft and carry either conventional or nuclear weapons.

But the United States may be playing catch-up in a global hypersonics arms race, officials and analysts say.

The Russian launch seemed to confirm fears Gen. John Hyten, commander of the Offutt-based U.S. Strategic Command, has expressed repeatedly in the past year. He warned that the United States could fall behind both Russia and its other main strategic rival, China, in developing hypersonics — or, of even greater concern, defending against them.

China has been developing hypersonic weapons since at least 2014 and has said it will deploy them starting in 2020.

“We’ve watched them test those capabilities,” Hyten told Congress last March, but he added, “we don’t have any defense that could deny the employment of such a weapon against us, so our response would be our deterrent (nuclear) force.”

Current intercontinental ballistic missiles can fly just as fast as hypersonics, but this new class of weapons can fly in controlled patterns just above the Earth’s atmosphere and be shifted in midair. That shiftiness allows them to disguise their intended targets and makes missile defense much more difficult. Their speed could reduce the time an opposing commander has to respond.

A 2017 report by the RAND Corp. called hypersonics “a game-changing capability.”

“Detecting a hypersonic vehicle coming in is scary,” said Richard Speier, a physicist and consultant who co-authored the report. “You can have single-digit minutes to determine where it’s going to strike.”

Alarms also were raised about hypersonics in the Defense Department’s long-awaited Missile Defense Review, released Thursday. In it, President Donald Trump called for a broader array of missile-defense systems because of new threats from rivals like Russia and China, as well as from “rogue nations.”

Hyten played a key role in producing the report. Missile defense is one of StratCom’s major responsibilities.

When countries like North Korea launch missiles, StratCom is watching

“This is just, again, a return to great power competition,” Hyten said last August during a StratCom-sponsored military seminar in La Vista.

He said the U.S. must go faster than its adversaries in developing the new weapons.

“We’ve always done that in the past. We have to do this again,” Hyten said.

The U.S. has been developing its own hypersonic weapons. The Army, Navy and Air Force each have separate programs to develop and field them under an effort known as Prompt Global Strike.

To catch up, U.S. officials have referred to hypersonic weapons as their “first, second and third” weapons development priorities. The Pentagon’s 2019 budget called for increased funding for a key hypersonics program from $201 million in 2018 to $278 million in 2019, with close to $2 billion allocated to the program.

“We’re not going to just sit around and wait,” Hyten told an audience at StratCom’s Space and Missile Defense Symposium in Huntsville, Alabama, in August. “We need to step it up when it comes to hypersonic technology. And we are. And we’re moving fast.”

Speier, a Nebraska native, said the current situation reminds him of the Russian launch of the Sputnik satellite in 1957 when he was a student at Omaha’s Central High School. He said it “really got people’s attention” because at the time the U.S. space program lagged far behind.

“In Sputnik, we were faced with a threat we couldn’t stop. We were behind, in a certain sense,” said Speier, who went on to get degrees at Harvard and the Massachusetts Institute of Technology. “It’s not only the problem of detecting (hypersonics). It’s being able to track them.”

StratCom employs a large network of sensors — on satellites, on the ground and at sea — to detect missile launches around the world. But Hyten said he needs a new type of satellite that would watch from low-earth orbit and more quickly detect hypersonics, which skim along close to the top of the atmosphere.

That’s quite different from the trajectory of ICBMs, which soar much higher and fall predictably, like a fly ball dropping in center field.

Still, there are some nuclear weapons experts who believe that the threat posed by hypersonic weapons is overblown.

Jeffrey Lewis, who heads the East Asia Nonproliferation Project at the Middlebury Institute’s James Martin Center for Nonproliferation Studies in California, said hypersonics may have some maneuverability while they’re skimming over the atmosphere, but they must slow down for re-entry and glide to their targets.

“How agile could that really be?” Lewis said. “This thing will slow down and glow like a Christmas tree.”

Hans Kristensen, director of the Nuclear Information Project for the Federation of American Scientists, said he’s less concerned about hypersonics being used to deliver nuclear weapons than conventional ones.

Their primary advantage over ICBMs is the ability to guide them within feet of their intended target from a long distance away, he said.

But that kind of accuracy isn’t important when it comes to delivering nukes. If an adversary wanted to target, say, a military base, it would only be necessary to explode it in the general area to deal a crippling blow.

“Nuclear is a big bang,” Kristensen said. “You don’t really need that kind of accuracy.”

What hypersonics could do is make it much easier for Russia or China to deliver conventional weapons quickly over long distances, said James Acton, co-director of the Nuclear Policy Program at the Carnegie Endowment for International Peace.

“We’re already vulnerable. Russia having more ways to nuke us doesn’t really worry me,” Acton said. “I am worried about Russia being able to develop very, very long-range conventional weapons.”

That could allow an adversary to target critical infrastructure — for example, important satellite stations — that isn’t threatened now. So if a rogue power like Iran or North Korea were to acquire hypersonics, it could potentially deal a blow to the U.S. without provoking a nuclear war.

“Defending against all this stuff would be very hard,” Acton said.

Some of these experts think hypersonics would make the biggest difference in a regional war among neighbors or near-neighbors. The weapons’ speed might tempt a smaller power to launch a pre-emptive strike against a rival, or against U.S. interests overseas.

“Looking a decade or two down the line, it’s a problem beyond the U.S. and Russia,” Speier said. “The lesser powers can also make it very difficult for the United States — threatening our forces that may be deployed elsewhere in the world.”

To reduce the chances of that happening, the RAND report recommended that the U.S., Russia and China agree not to export hypersonic technology to other countries.

Acton believes that the United States should focus on defense and detection.

Putin’s chest-thumping about the Avangard test may play well with Russians who are nostalgic for Cold War-era competition with the U.S., Kristensen said.

But he doesn’t believe hypersonics ever will amount to more than a small fraction of any nation’s strategic arsenal.

“It’s a niche program,” he said. “The game is always the same: somebody develops something, and we develop countermeasures.”

'Caught in the middle': Shutdown putting the pinch on local federal employees, subcontractors

Families and companies are looking for ways to keep covering expenses while paychecks and payments are withheld.

This is Brooks Hartley, not Sharon Wit as the title may say. Once again a "journalist" from what is essentially a home town newspaper wants a headline and to be read in to national defense capability. Guess what, no commander of National Defense is going to give you a effin clue. So make it up as you go, you get paid by the column inch.

Well what do you expect for a trillion dollars every year?

As if there isn't enough shi* to worry about in the world today. Jesus!

It's Russia's response to what they see as a threat from Trump lavishing still more funds on the "Military-Industrial Complex" (President Eisenhower's phrase).

"the U.S. has a higher defense budget than the next 10 highest-spending countries combined and more bases than all other nations together. The president wants his latest $750 billion budget to make the U.S. military "more powerful than ever before" ...

... Chinese and Russian officials have warned of a potential arms race breaking out in response to the new missile defense plan introduced by the United States." -https://www.newsweek.com/china-russia-arms-race-trump-missile-1297766