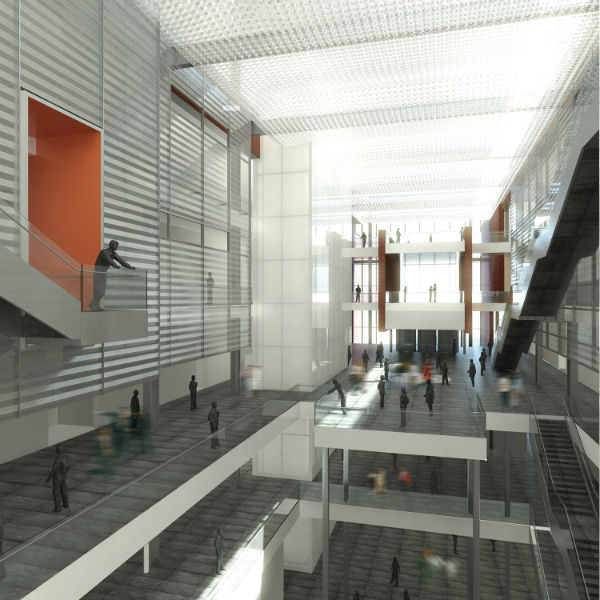 StratCom's new underground operation center will be inside a thick steel cube, encased in a concrete shell, surrounded by catwalks and scaffolding. 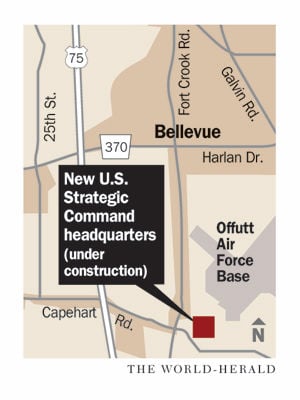 Construction of StratCom's $1.2 billion headquarters at Offutt Air Force Base. "Just a few months ago we were digging down. Now we're building up," Kenneth Callicutt said.

StratCom's new underground operation center will be inside a thick steel cube, encased in a concrete shell, surrounded by catwalks and scaffolding.

The cement mixers crawl over the Offutt Air Force Base construction site, as many as 30 a day, disgorging a gray slurry that will harden into floors and walls and ceilings able to withstand the assault of America’s enemies and Nebraska’s worst weather.

Two and a half years after work began, the U.S. Strategic Command’s long-awaited new headquarters is rising out of the ground. In a few weeks, cranes will hang precast brick panels on the building’s steel framework. Hundreds of workers who have labored in the rain and snow and heat finally will work indoors.

“Just a few months ago we were digging down. Now we’re building up,” said Kenneth Callicutt, who is StratCom’s primary overseer of the five-year construction project. “Some people say ‘Now it’s looking like a real building!’ ”

StratCom’s Command and Control Facility will house more than 3,500 military and civilian employees tasked with the sensitive and critical job of anticipating — and preventing — the biggest threats facing the United States and its allies. In the worst case, they would fight a nuclear war.

The Defense Department has budgeted $1.2 billion for the project. It’s believed to be the largest construction project in the state’s history — 10 times the cost of Omaha’s TD Ameritrade Park, and nearly as expensive as the Dallas Cowboys’ massive AT&T Stadium, which opened in 2009.

In spite of challenges such as a high water table and a shortage of skilled workers, Callicutt said the project is only a few days behind schedule and holding to its current budget.

About half of the cost is in the building itself, said Callicutt, director of capability and resource integration. The rest will be used to install a sophisticated communications hub equipped with built-in redundancy to make it resistant to sabotage or natural disaster.

StratCom has long desired a new headquarters building to replace its existing structure, the Curtis LeMay Building, which opened in 1957.

At the time, Callicutt said, what was then called the Strategic Air Command had only a single mainframe computer in the building, compared with some 10,000 individual workstations today.

The computer network must keep running during a national emergency, including a nuclear war. It requires an enormous cooling system, larger than anything envisioned when the current headquarters was built.

The current chillers all must function perfectly in order to keep up. There are no backup systems.

“If any of the three chillers goes off, we have to start shutting down computers,” Callicutt said.

For years, the wiring in the aging fans was going bad.

“Instead of quitting, their failure mode was fire,” he said. Until they were upgraded, StratCom was experiencing electrical fires at the rate of about one per month, as recently as 2010.

Fire wasn’t the only problem. So was water.

Offutt is built along the Missouri River. The ground can be soggy, with water bubbling up to within about 24 feet of the surface. With StratCom’s famous command bunker sunk deep underground, flooding has been a constant worry. Fixing leaks requires a lot of expensive digging.

Engineers considered renovating the existing building, Callicutt said, but rejected the idea because it would have cost about 15 percent more than building a new one. Congress began funding the building’s design in 2009 and construction began in 2012. The Omaha-based Kiewit Building Group was selected as lead contractor in partnership with another experienced firm, Hensel Phelps, based in Greeley, Colorado. Groundbreaking took place in October of that year.

“This facility is really important to the Omaha metropolitan and Bellevue area,” then-U.S. Rep. Lee Terry told The World-Herald at the time. “It’s more than just a building. It is a part of us.”

“It coincided with the beginning of sequestration,” Callicutt said. “There was a lot of concern that our building was going to get caught up in all the freezes that were going on.”

StratCom looked over four sites at Offutt and selected an 80-acre site near the StratCom gate on Capehart Road.

While planning the project, the U.S. Army Corps of Engineers realized that the water table would likely cause problems at the Offutt site. To head off the issue, they drilled down to bedrock and poured a concrete trench to drain groundwater away and keep the foundation dry.

The replacement for the LeMay Building’s iconic underground command center will be the most jaw-dropping part of the new headquarters. The new operation center will be inside a thick steel cube, encased in a concrete shell, beneath the surface and surrounded by catwalks and scaffolding.

The command post is designed to be impenetrable to the powerdestroying radiation burst, known as a “high-altitude electromagnetic pulse,” that accompanies a nuclear blast. It will sit beneath a concrete plaza near the center’s entrance.

The steel frame of a soaring atrium is taking shape on the 4½-acre footprint of the main building. The atrium stands between sprawling wings of offices — three levels above ground, two below — on its north and south sides.

The office wings are taller than normal, with 18-inch spaces underneath every floor to accommodate 4.7 million feet of copper wiring cable.

The new building is expected to be 20 to 30 percent more energy efficient than the old one, Flere said — good enough to earn a silver rating on the Leadership in Energy and Environmental Design (LEED) scale.

The need for absolute continuity in its power supply prevented the Air Force from making use of solar or wind power, the output of which fluctuates widely during the day. But the building does use motion sensors and auto-dimming lights to control energy costs.

Engineers have gone to great lengths to strengthen the building against a terrorist attack. It is designed to absorb a blow from a truck packed with explosives, Callicutt said. And extra-thick steel beams and pilings are designed to limit structural failure, preventing a catastrophic collapse of the type that brought down the World Trade Center towers in the terrorist attacks of Sept. 11, 2001.

“The standards have all changed since 9/11,” Flere said.

Through the end of last year the government already had awarded nearly $250 million in contracts for the Offutt project, according to information taken from the website USASpending.gov.

The site also shows 253 change orders — some of which have added to the cost, though others have subtracted. Collectively the changes have added about $21 million, mainly because of an enhanced electronic-security package that was required after the start of construction. Those costs are covered out of a contingency fund, said Matt Bird, senior project engineer for the Army Corps of Engineers.

About 650 workers are laboring at the site, Callicutt said, but he predicted that number will reach 1,200 later this year as work intensifies. Construction is still expected to wrap up in September 2016, he said.

The biggest challenge is a severe shortage of skilled construction workers in the Omaha area. Several major construction projects — including Google’s $400 million data center in Council Bluffs, a $323 million cancer center at the University of Nebraska Medical Center and an $82 million arena at the University of Nebraska at Omaha — have soaked up all the available labor in several trades.

“Omaha doesn’t have enough people available right this minute to get all of this work done,” Callicutt said. “We’re actually advertising all around the country.”

Once the building is completed, the second phase of the project will begin: installing about $600 million worth of equipment and critical electronics.

As a communications hub, StratCom is as important as any defense installation in the world. Besides command and control for all U.S. nuclear and global strike forces, the building backs up both the Pentagon and the Northern Command Headquarters in Colorado Springs, Callicutt said. Digital communications for all military bases in the western United States also are routed through the building.

Much of that electronics work will be performed by National Guard soldiers trained for the task and supervised by the Navy’s Space and Naval Warfare Systems Command.

“It takes us about a year and a half to do this move,” he said.

The proposals, including ideas by City Councilman Chris Jerram, vary in scope and budget but all use the expertise of a nonprofit workforce agency.

Although welcome, the metro-area construction boom that began two years ago is creating a local shortage of ironworkers, steamfitters, sheet metal workers, plumbers, electricians and other skilled labor.

The site of the future U.S. Strategic Command headquarters is no longer a hole in the ground: Construction has finally begun on the project.

The project will incorporate 28,000 cubic yards of concrete (so far)

Adm. Cecil Haney sees risk in the push within the Republican Party to retain spending caps.

Military history has been made at Offutt Air Force Base for more than a century, since the first Army troops marched to what was then called F…

Officials said they still plan to completely renovate the gate in coming years, but will continue to upgrade the gate and increase security measures in the meantime as funding becomes available from the Air Force.

The Papio-Missouri River Natural Resources District has been smart to prioritize protection of Offutt Air Force Base land from flooding.