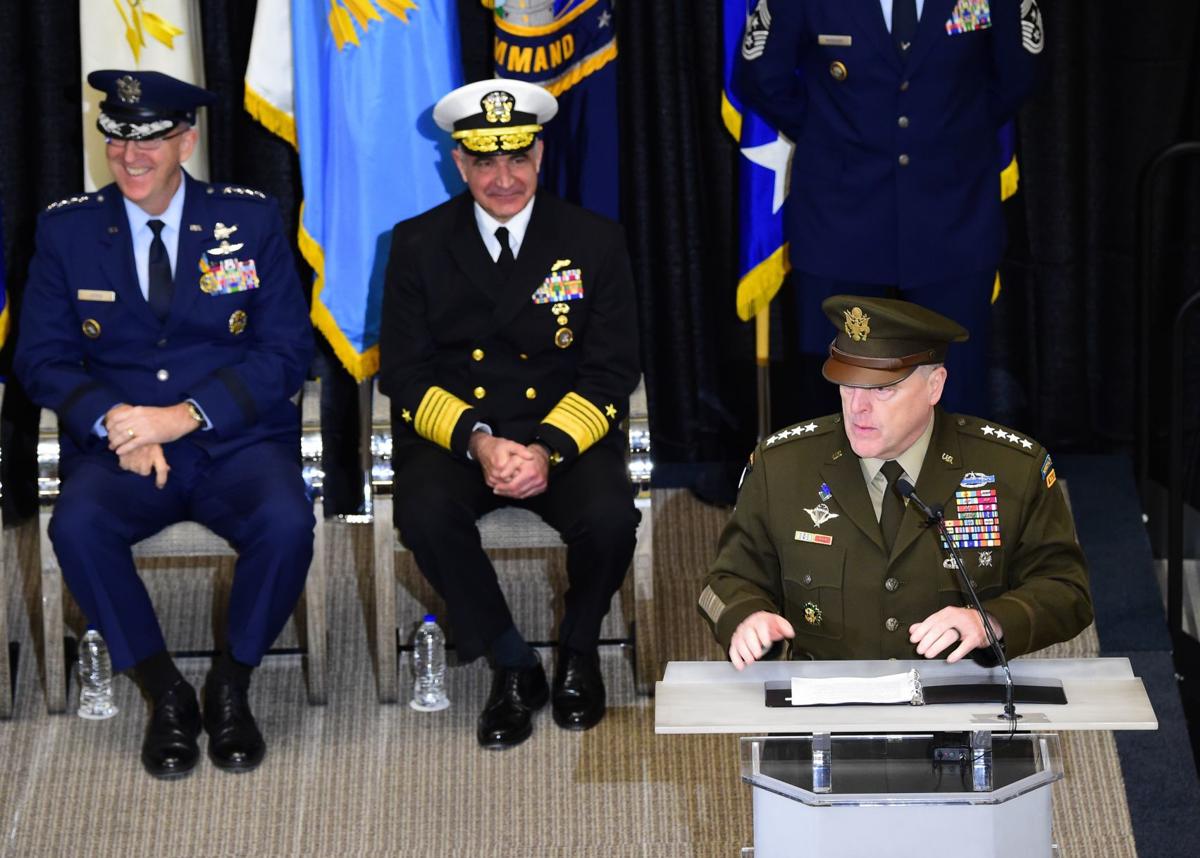 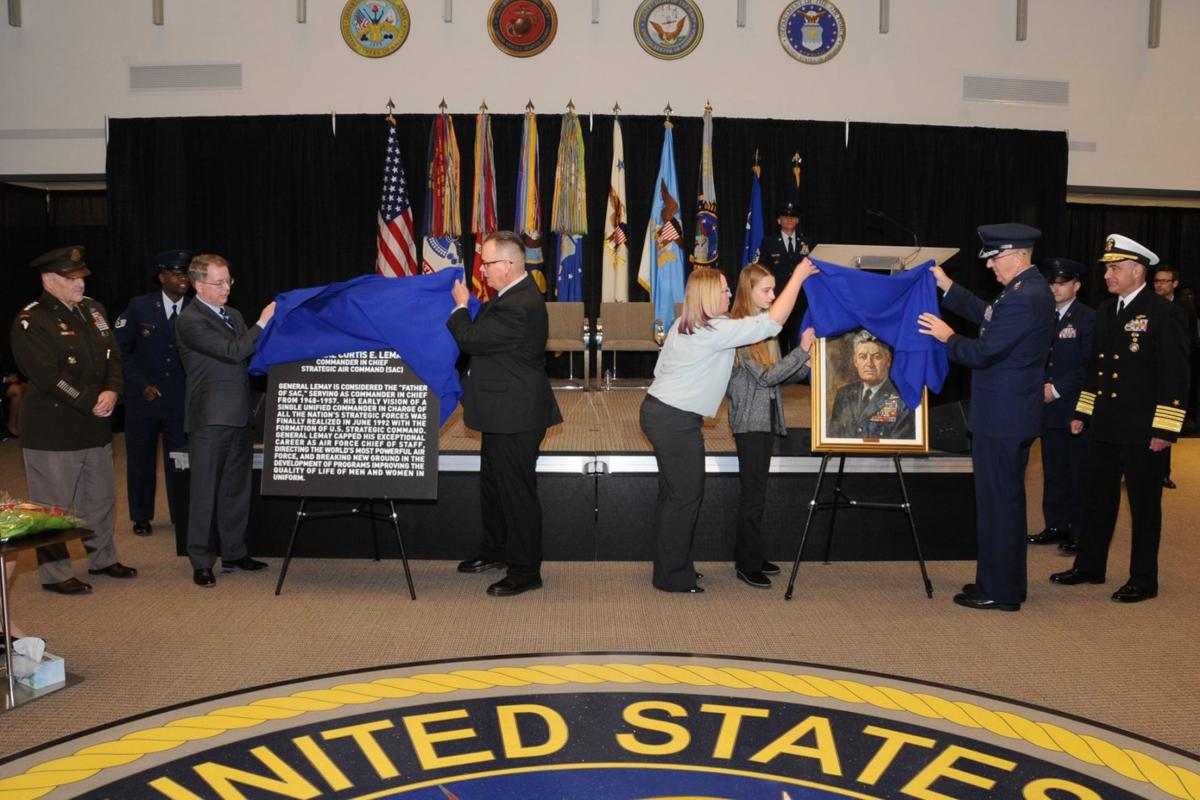 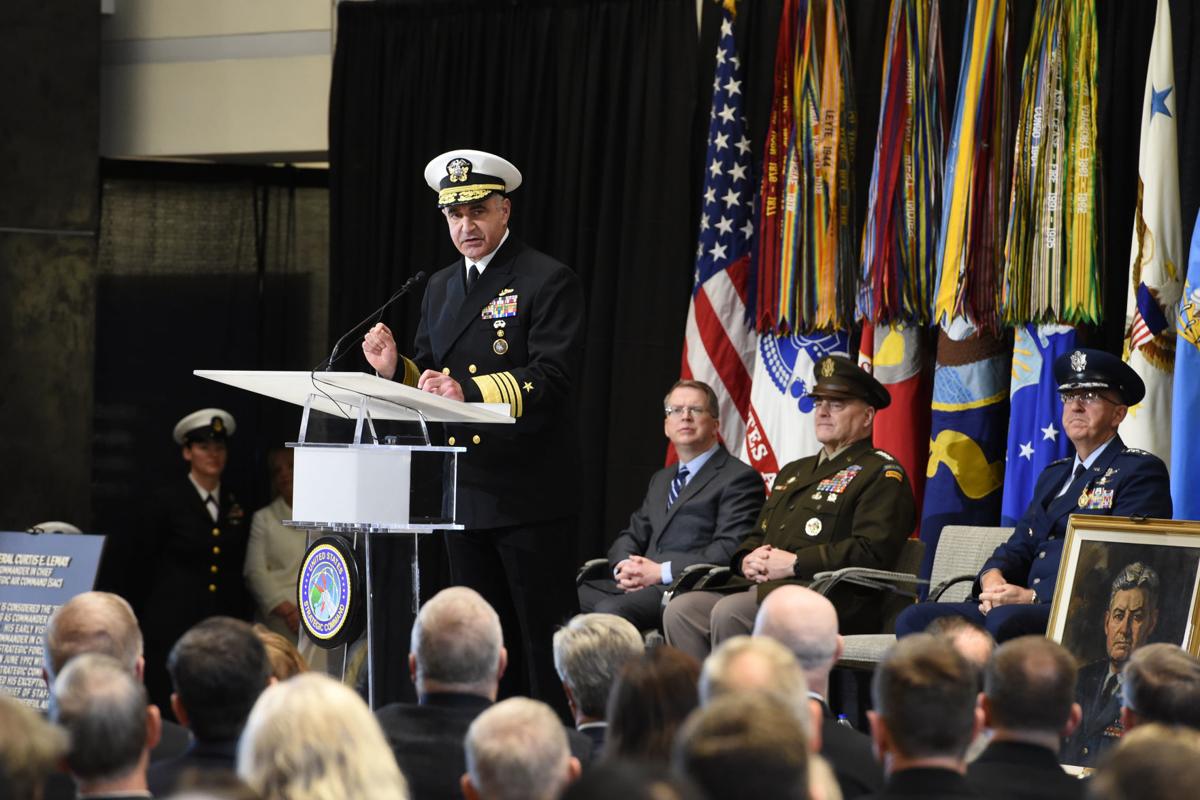 Adm. Charles A. Richard, the new commander of U.S. Strategic Command, speaks at the change of command ceremony Monday. 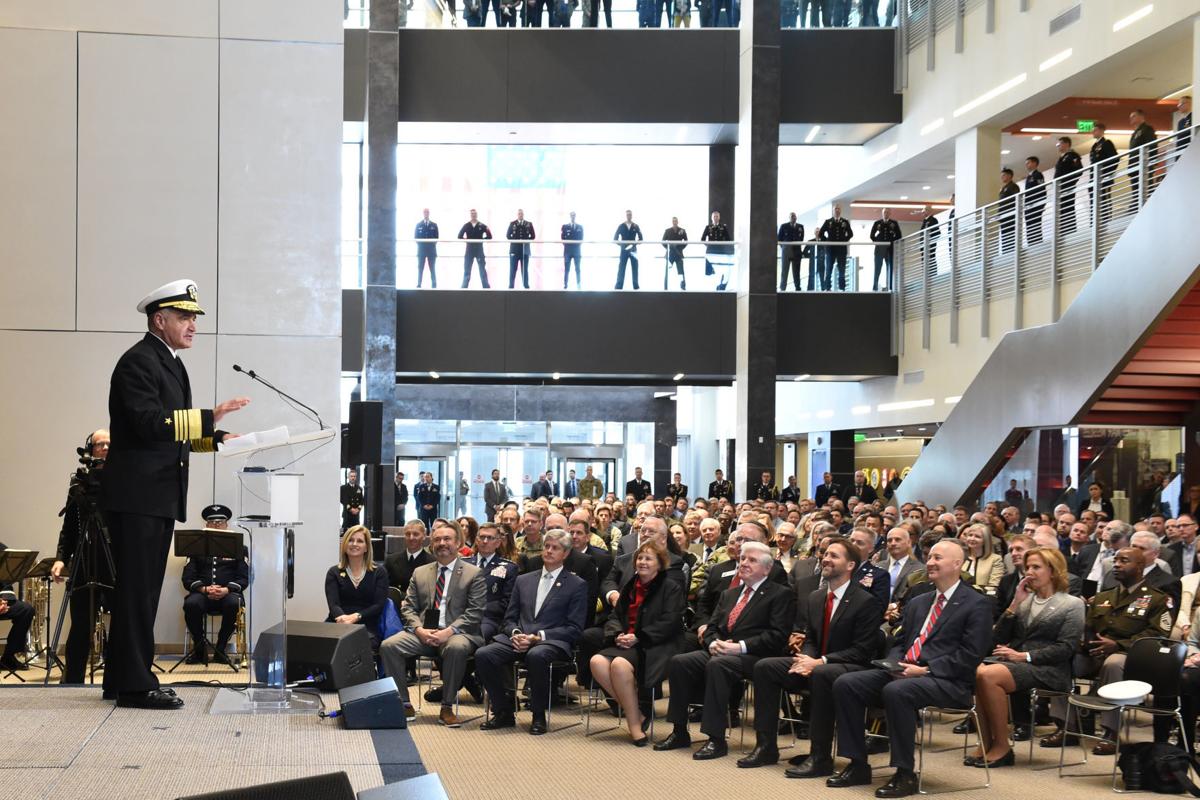 Adm. Charles Richard, the new commander of the U.S. Strategic Command, speaks to a crowd of about 800 at the ceremony Monday. Richard, who previously served as StratCom's deputy commander, said, “We could not be more thrilled to be back at Offutt.” 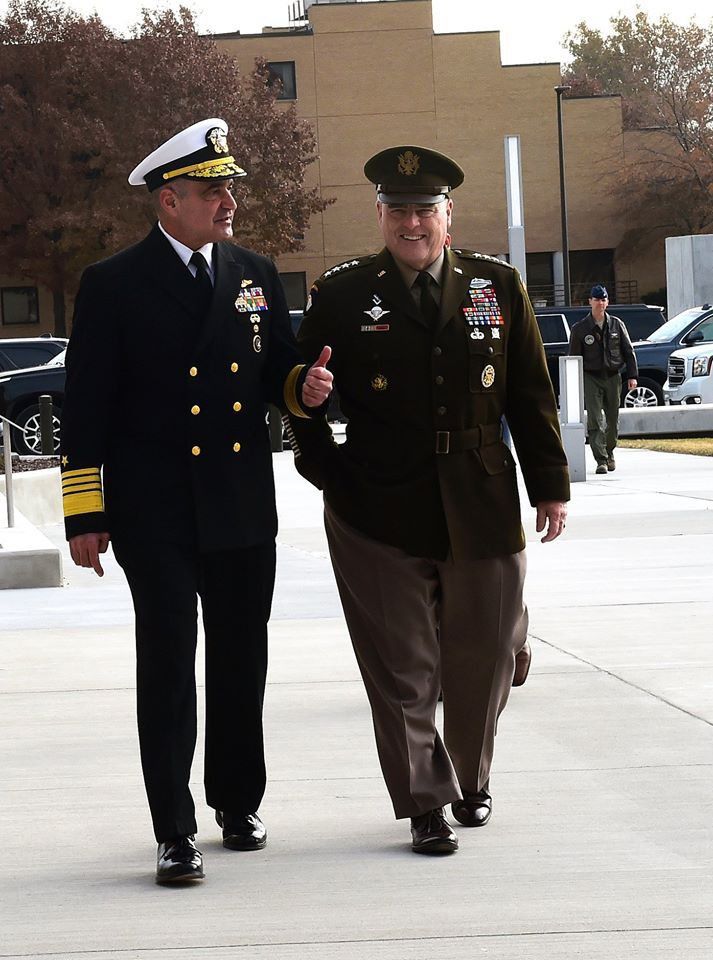 Adm. Charles Richard, left, commander of U.S. Strategic Command, and Gen. Mark A. Milley, chairman of the Joint Chiefs of Staff outside the new StratCom headquarters on Monday. 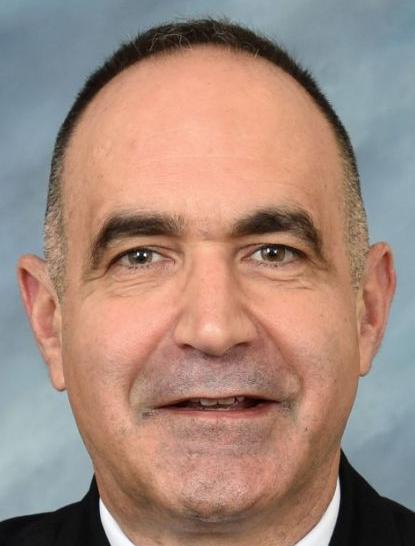 Adm. Charles A. Richard, the new commander of U.S. Strategic Command, speaks at the change of command ceremony Monday.

Adm. Charles Richard, left, commander of U.S. Strategic Command, and Gen. Mark A. Milley, chairman of the Joint Chiefs of Staff outside the new StratCom headquarters on Monday.

Charles Lodge and his family slipped royal blue cloths from a portrait and a plaque honoring the memory of his grandfather, Gen. Curtis LeMay, opening a new chapter in nuclear deterrence under the roof of Offutt Air Force Base’s newest — and priciest — weapons facility ever Monday morning.

About 800 military and civilian workers and VIP guests attended Monday’s dedication of the new StratCom headquarters in honor of the iconic Air Force leader who moved the infant Strategic Air Command from Maryland to Nebraska in 1948 and presided over its growth into the world’s most important and most feared military command.

Lodge, his wife, Monnica, and daughter Abigail are LeMay’s closest living relatives. LeMay headed SAC until 1957 and went on to serve as vice chairman and chairman of the Joint Chiefs of Staff. He died in 1990.

The ceremony also saw the handoff of the leadership of StratCom — which assumed the nuclear mission as part of a military reorganization after the Cold War — from Air Force Gen. John Hyten to Navy Adm. Charles “Chas” Richard.

The event took place in the giant atrium of the new headquarters, which is more than 900,000 square feet, as workers on upper floors lined the railings to watch.

“Today we are standing inside a facility that ties our legacy from the days of Strategic Air Command into the future of StratCom,” said Deputy Secretary of Defense David Norquist, the senior civilian Pentagon official at the ceremony. “The LeMay command-and-control facility represents a $1.3 billion investment in the future of your mission. ... It is also a show of commitment to the Offutt community, which remains the home of this mission, now and into the future.”

It took several years of lobbying to get congressional funding for the new building. Ground was broken in October 2012, and the building was slated for delivery on Sept. 11, 2016, the 15th anniversary of the 9/11 terrorist attacks.

The project quickly ran into trouble because of the site’s high water table, which required the construction of a bathtub-like structure beneath the building to sluice away water.

As construction reached above ground, mold was discovered inside the miles of ductwork being installed in the building. That caused lengthy delays and boosted the costs, while the Army Corps of Engineers and the prime contractor, Kiewit Phelps, tussled over who was responsible.

The project also suffered fires and floods. A 2017 tornado blew through within 200 yards of the construction site. The project fell more than two years behind schedule.

Now, though, StratCom has moved about 2,000 of its 3,200 employees into the new building. Even as the new facility was being dedicated, Hyten said, the building’s new Global Operations Center — the famous bunker, which monitors strategic threats worldwide around the clock — was undergoing a key test.

“Downstairs, in the Global Operation Center, the crew is working on its first command-and-control exercise,” Hyten said. “Isn’t that an amazing coincidence?”

Army Gen. Mark Milley, who recently assumed the chairmanship of the Joint Chiefs of Staff, praised StratCom and its SAC forebears for deterring major wars in the nearly three-quarters of a century since the end of World War II.

He praised Hyten for pumping “new life into our nuclear triad with modernization” during his three-year tenure at StratCom, and for enabling the spinoff of cyberwar and space warfare to the new U.S. Cyber Command, based in Maryland, and the U.S. Space Command, based in Colorado.

At the same time Hyten oversaw the creation of a new Nuclear Command, Control and Communications (NC3) enterprise within StratCom, with the goal of streamlining the bureaucracy that operates the nuclear arsenal. And he reorganized StratCom, reducing the number of major organizations within it from 18 to three.

Hyten and his successor, Richard, grew up just a few miles apart in northern Alabama but took very different paths to the helm of StratCom. Hyten’s career has been steeped in space, with prior leadership positions at the Offutt-based 6th Operations Squadron, the 50th Space Wing and the U.S. Air Force Space Command.

He will move to the Pentagon to become vice chairman of the Joint Chiefs of Staff under Milley, the second highest uniformed position in the military.

Richard spent much of his career in nuclear submarines, including command of the NR-1 deep-submergence submarine, the USS Parche and Submarine Group 10. He also served as deputy commander of StratCom under Hyten from 2016 to 2018.

“We could not be more thrilled to be back at Offutt,” Richard said. “StratCom always is and has been a special place.”

He said he doesn’t plan any major changes in StratCom’s direction and will continue Hyten’s push to modernize nuclear weapons systems, including new Columbia-class ballistic missile submarines, the B-21 strategic bomber, new intercontinental ballistic-missile systems and new B-61 gravity bombs.

The cost of those weapons — all of which replace systems that are 30 to 50 years old — has been estimated at $400 billion in the next 10 years, and much more over 30 years.

While expensive, Richard said, it has become more important because Russia has been rebuilding its own arsenal. China, Iran and North Korea also are posing new threats.

“Modernizing our triad is not an arms race, it’s avoiding unilateral disarmament,” he said. “I’ve got to have the triad. It’s the only weapons system where you don’t have to pull the trigger for it to work.”

The leaders of the U.S. Strategic Command secured the Air Force's permission to carry the name of Gen. Curtis E. LeMay from the longtime StratCom headquarters to the sleek new headquarters building right across the street.