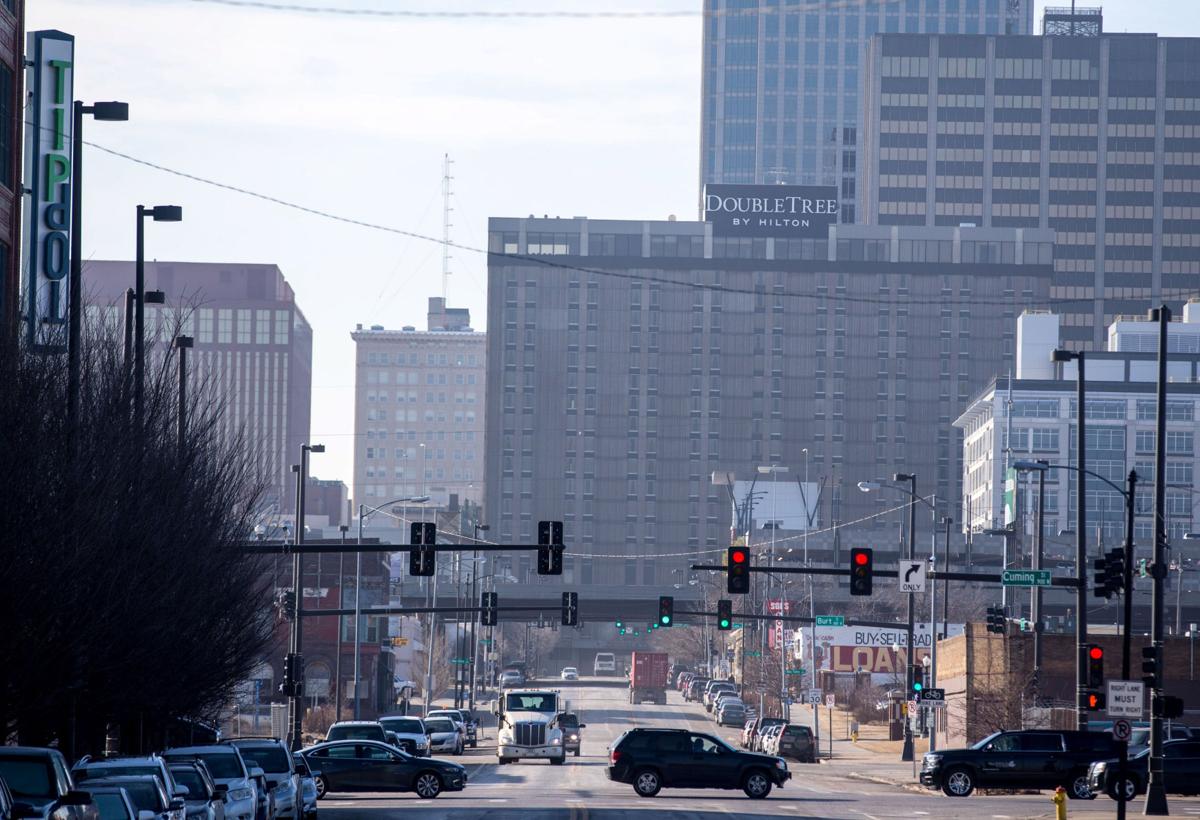 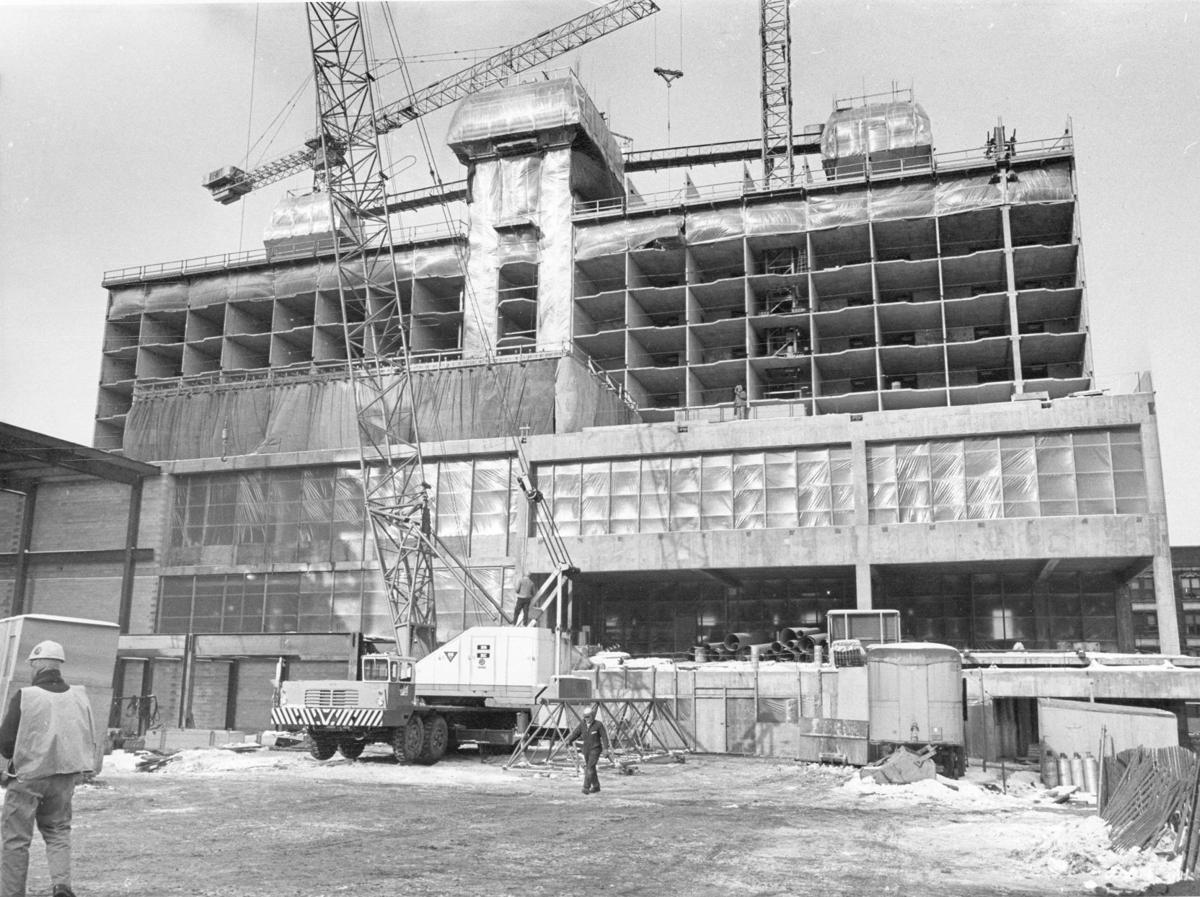 The Hilton, which is now a Doubletree Hotel, on 16th Street under construction in January 1970. The hotel hurt business on 16th and cut off north Omaha from downtown. 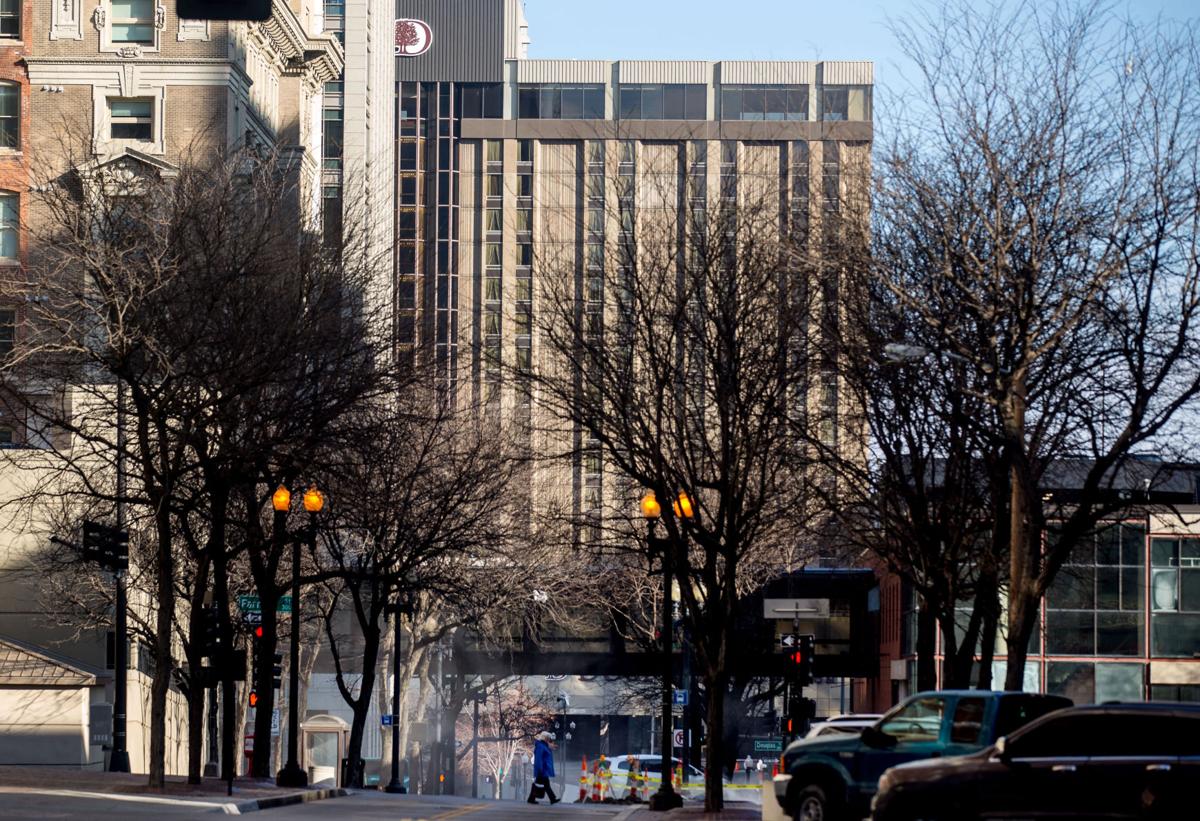 The DoubleTree Hotel that separates the two parts of 16th Street in Omaha may eventually come down, if the City of Omaha follows through with talk of reconnecting 16 Street. 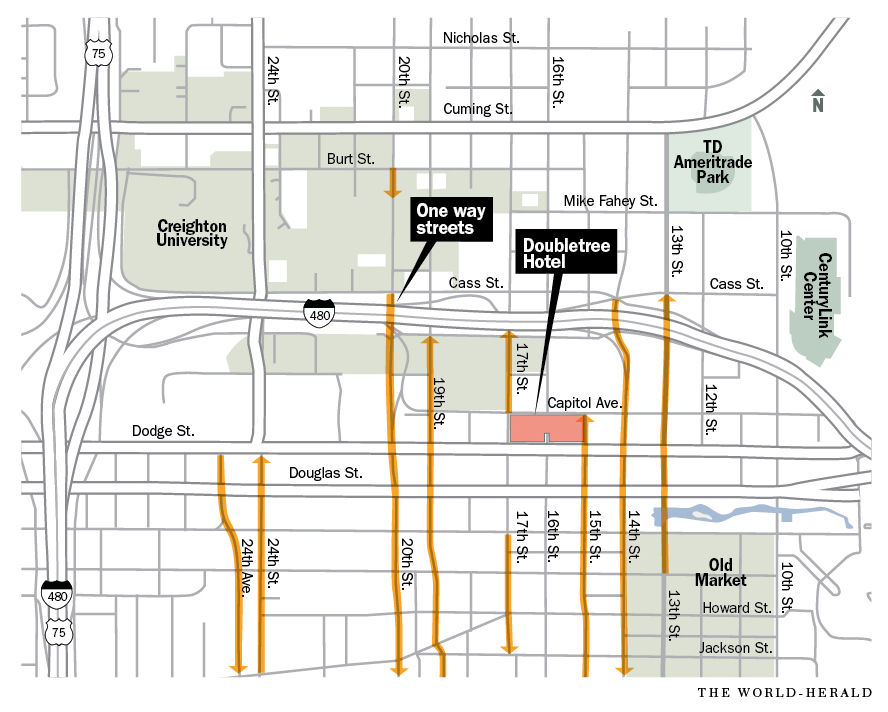 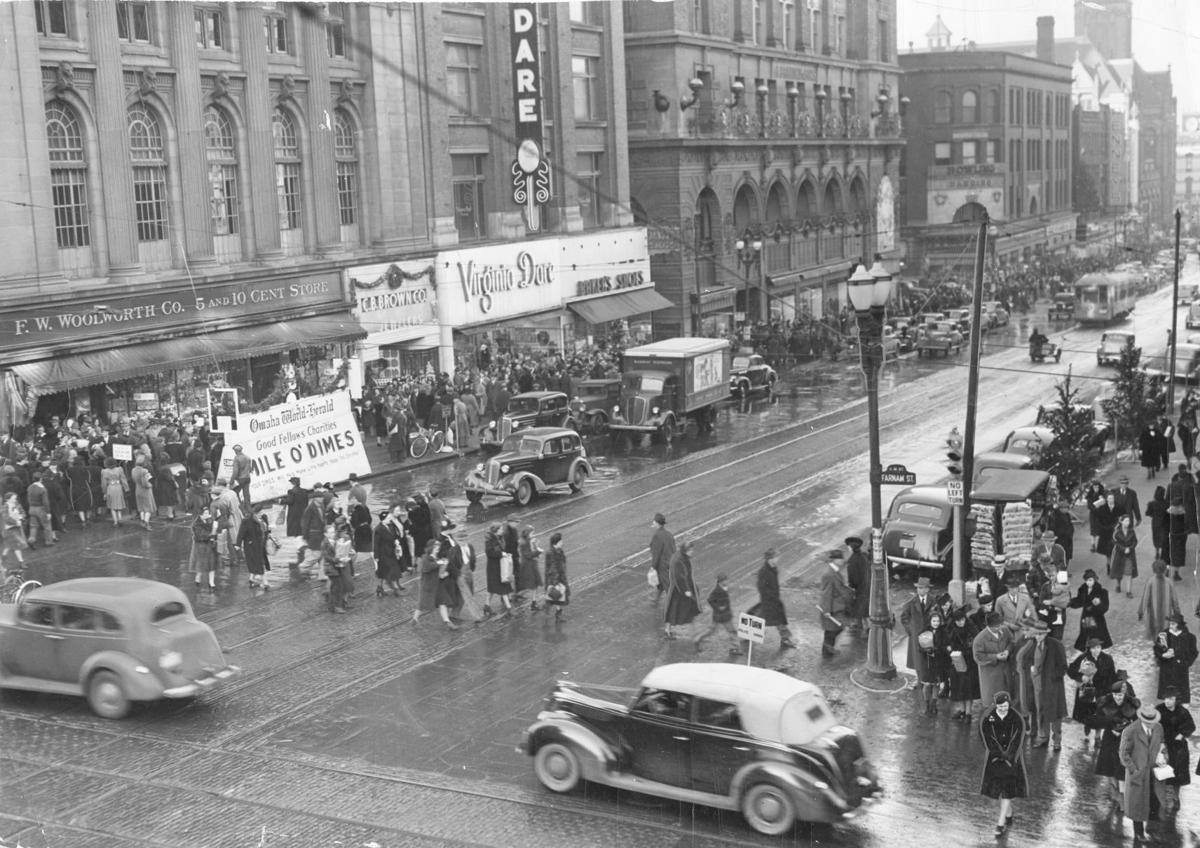 At Christmastime in 1940, 16th Street between Farnam and Douglas Streets was a bustling spot for shopping. When the hotel went up in 1970, it curbed the commercial activity along the corridor, leaders say.

The Hilton, which is now a Doubletree Hotel, on 16th Street under construction in January 1970. The hotel hurt business on 16th and cut off north Omaha from downtown.

The DoubleTree Hotel that separates the two parts of 16th Street in Omaha may eventually come down, if the City of Omaha follows through with talk of reconnecting 16 Street.

At Christmastime in 1940, 16th Street between Farnam and Douglas Streets was a bustling spot for shopping. When the hotel went up in 1970, it curbed the commercial activity along the corridor, leaders say.

City leaders decided nearly 50 years ago to close off 16th Street between Capitol Avenue and Dodge Street for a new hotel that was supposed to spur downtown development.

But they quickly realized that it was a mistake — the hotel created a new barrier between downtown and north Omaha and stifled the once-bustling commercial district of 16th Street.

Now, Mayor Jean Stothert and others say it’s time to discuss ways to rectify the mistake.

The discussion is in its infancy, but the mayor, current and former city planners and other civic leaders expressed excitement at the possibility of reconnecting 16th Street, by either tunneling under the Doubletree Hotel or demolishing it altogether.

“Opening up 16th Street would make a lot more sense to encourage downtown development and jobs,” Stothert said. “It’s all about bringing jobs back to the urban core and adjacent neighborhoods.”

The city agreed to close 16th Street between Dodge Street and Capitol Avenue for the 1970 opening of what was then a Hilton Hotel.

Peter Kiewit was one of the city leaders who pushed for the project. But by the time he died in 1979, he had realized that there were negative unintended consequences, according to Lyn Wallin Ziegenbein, director emerita of the Peter Kiewit Foundation.

“To his dying day, blocking the main artery of Omaha commerce, 16th Street, was one of Peter Kiewit’s abiding regrets,” Ziegenbein said.

City leaders today agree: the decision stifled activity along what was a popular commercial corridor. And it hurt north Omaha, which was left without an easy, direct route to and from downtown.

Stothert said there’s no specific proposal for how to reopen the street.

Stothert said recent discussions about the future of downtown have gotten people talking about the benefits of reopening 16th Street, one of the few two-way streets running north and south from downtown.

“By the end of the planning period, the Doubletree Hotel will be approaching 70 years in age,” the plan says. “It is entirely possible that it will be at the end of its useful life span. If redevelopment of the site occurs, 16th Street should be reconnected between Capitol Avenue and Dodge Street, thus providing a direct connection (streetcar, vehicular and pedestrian) between the Downtown Core and North Downtown.”

Another option would be to build a tunnel, but several people suggested that that possibility would be too expensive and wouldn’t offer the same benefits as a regular street.

Either way, the logistics would most likely not be easy — or cheap.

“I think it would be tricky,” said Steve Jensen, the city’s planning consultant and a former planning director. “It’s not designed to easily extend the street through. Could it be done? For the right amount of money, anything could be done.”

Of course, it’s not just up to the city. First National Bank owns the land, and Doubletree owns the building.

The hotel’s general manager, Sandy Buonanni, said he hadn’t participated in any discussions about an extension of the street through the Doubletree. He said if First National expressed interest in the concept, he’d take the ideas to his corporate bosses.

A spokesman for First National said it would be premature to comment on the proposal before the city offers a specific plan.

The idea of blocking the street originated in the late 1960s, when Omaha leaders said the new hotel would be a boon for downtown.

In 1968, City Councilman and future Mayor Al Veys said of the project: “This is just the shot in the arm that downtown needs. I see no reason we can’t vacate the street for the Hilton.”

Furthermore, a “superblock” development fit with the trends of the 1970s, said Marty Shukert, another former city planning director.

“Keep in mind that in Omaha of 1970 ... the Hilton was a flagship hotel,” he said. “It was a major community project that many of the movers and shakers of the city were behind because they wanted to get a class A hotel.”

The hotel became a Red Lion Hotel in 1980, and it was home to a penthouse-level restaurant, Maxine’s, that was the place to be in Omaha for a time. It became a Doubletree in the 1990s.

Many black Omahans have long seen the hotel, built on the heels of the race riots of the mid- to late 1960s, as a wall between north Omaha and downtown.

Preston Love Jr., a longtime north Omaha resident and community activist, said the hotel is a symbol of the physical and psychological barriers between north Omaha and the rest of the city.

“It’s absolutely a sore spot,” Love said. “It is like the Confederate flag. It is what it is, but as long as you’re waving it, it’s a reminder of things, the way they were.”

Thomas Warren, president and chief executive of the Urban League of Nebraska, also said the hotel in effect cut north Omaha off from downtown.

He said the hotel is a symbol of a time when the city was investing money and effort into downtown — the Central Park Mall, now the Gene Leahy Mall, was being built — and north Omaha was falling behind.

“When we see private investment, economic development, it has the potential to improve the conditions of those who reside in proximity to the development,” he said.

Now the city is making a push on downtown development, particularly around north downtown and the riverfront.

There are two major projects planned north of Capitol Avenue within blocks of the Doubletree.

One, the Capitol District, is a $205 million project under way between 10th and 12th Streets. It will feature a Marriott Hotel, apartments, an outdoor plaza and retail.

The other project is a proposed development at the former Civic Auditorium site between 17th and 19th Streets. Plans for that site have not been finalized, but it will probably include a mix of retail, residential and public space.

Both are considered projects that could help link the Old Market area and downtown.

Brad Ashford, a former congressman who now leads a group designed to speed up development in midtown, said he sees consensus that 16th Street should not have been blocked.

“It was a last-ditch effort to save downtown,” Ashford said. But “it had unintended consequences.”

Ziegenbein and Ashford also have personal experience — both of their families operated stores on the bustling pre-hotel 16th Street.

The hotel never delivered that promised shot in the arm to downtown.

“It’s one of the things we should never have done,” Ashford said. “What’s neat is that we can rewrite history here.”

With a boost from City of Omaha, Turner Park East development moves forward near Midtown Crossing

The city's commitment to build a 400-space parking complex has accelerated a private effort to transform land east of Midtown Crossing into a multi-block office park.