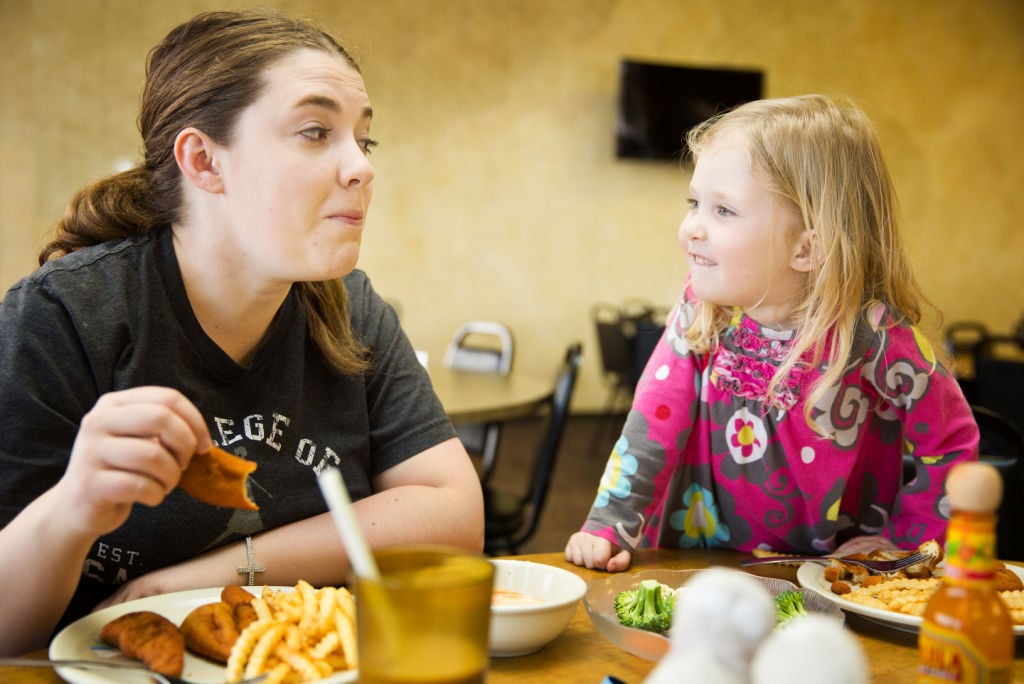 McGill tries to coax Marie into eating more chicken at the dining hall. 'Or we won’t get ice cream after dinner," McGill says. 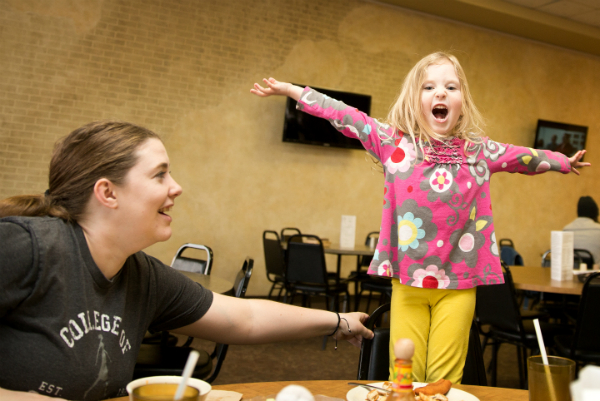 Marie McGill, 4, belts out "Let it go, let it go," a lyric from 'Frozen," in her dorm’s dining hall. Her mother, Nora McGill, tries to get her off the chair.

Nora McGill kisses her daughter Marie, 4, goodnight in their dorm room in College of St. Mary’s Madonna Hall. The college says the $10 million dorm for single mothers and their children reflects its commitment to help single moms succeed. When McGill graduates next year, she’ll miss the community of women like herself.

McGill tries to coax Marie into eating more chicken at the dining hall. 'Or we won’t get ice cream after dinner," McGill says.

Marie McGill, 4, belts out "Let it go, let it go," a lyric from 'Frozen," in her dorm’s dining hall. Her mother, Nora McGill, tries to get her off the chair.

Nora McGill wants her daughter to eat another chicken finger, the only entree the College of St. Mary cafeteria is serving that appeals to the picky eater.

But on this particular night, 4-year-old Marie has ants in her pants. She jumps on her chair. She stuffs french fries into her mouth and throws her arms wide while singing a song from “Frozen.”

She tries to distract her mom with the news that she can see her day care, the building across campus where Nora just picked her up minutes before. But eventually Marie gives in, because she knows the chicken might stand between her and the self-serve ice cream machine — and the play time waiting for her with her friends in Madonna Hall.

As soon as they step off the elevator, Marie jumps into the scrum in the common room, where a few moms are sitting to watch Madonna Hall’s littlest residents play. They have a shared kitchenette, TV and study spaces like most dorms, but Madonna Hall also has foam floors, a little indoor jungle gym and tons of toys.

“I need to get my degree and provide for both of us, so I can send her to school, too,” Nora said.

College of St. Mary has offered single mothers on-campus housing since 2000, but a dedicated residence hall was built for the Mothers Living and Learning program in 2012. It’s the newest building on campus, and a $10 million investment the college says reflects its commitment to improve the experience and graduation rates for single moms.

Nora, who will get her bachelor’s degree in nursing next May, took a few classes before her daughter came along, but she knew it was time to get serious once Marie was born. The Humphrey, Nebraska, native came to College of St. Mary three years ago because the Omaha college is one of few in the country with a dorm for single moms and their children.

Metro Community College recently decided to look at whether to build student housing and whether it’s feasible to build specialized dorms for veterans or single mothers.

At College of St. Mary, the cost is the same as living in the college’s other dorm, and the mothers pay the same tuition rates. But their children eat free on their meal plan, and they have a built-in support system of baby sitters and a network of college staffers who consider the moms’ success to be their jobs.

The single mothers’ success rate still lags behind the rest of the college.

The college estimates almost 18 percent of its students, both residents and commuter, are unmarried mothers. Between 2008 and 2012, only one in five of the mothers who were first-time students and commuted came back for their sophomore years.

Among the mothers living on campus, nearly half returned. But that still falls below the overall 79 percent of undergrads who returned for their sophomore year at the college last year.

Tara Knudson-Carl, vice president for student development at the college, said officials hope continual improvements to the program will help give single mothers the support they need to get a bachelor’s degree.

“We want them to walk across that stage and get that diploma,” Knudson-Carl said. “Anything we can do is a benefit to us and them, if they are able to stay here and succeed.”

The college’s program has grown over the years from nine students on campus in 2000 to about 22 this year. The new dorm has the capacity for 48 moms, who can have two children under 10 and share their suite-style dorm space with a roommate. Kids eat free on their mother’s meal plan, and there’s a day care center on campus.

The college has added staff to the program, Knudson-Carl said, and shifted focus to try to tackle more of the non-college problems the students may be facing. Students in campus ministry offer free baby-sitting twice a week, and many work-study jobs allow students to occasionally bring their children along.

Sheena Parks, director of single parent success, also teaches a mandatory success class for on-campus moms that covers everything from parenting style to time management to introducing your child to a new boyfriend.

She brings in experts on child custody and support issues for the women, helps them arrange child care and helps them navigate the bureaucracy of financial aid or state benefits.

“The first few weeks, they can get really overwhelmed,” she said. “I just tell them, ‘Get your child to day care and get to class. We’ll deal with the rest.’”

Parks meets one-on-one with new moms every month through the first semester and is alerted if their grades suffer or they don’t come to class. To draw in more commuting moms, she works with a student organization for mothers to plan family activities on campus.

Mothers who live in Madonna Hall say the program gave them a chance for a traditional college experience they thought they lost to motherhood.

Nora, 25, can’t imagine how Marie will take it next year when she tells her it’s time to leave behind their world with friends behind every door and dozens of women who dote on her. Nora will also miss having a community of women like her, balancing the competing stresses of college life and motherhood.

“We all have similar histories and similarities in our lives, and we’re doing something that’s very hard,” Nora said. “And we’re doing it very well.”

Alex Gaskin, 20, moved with her two children from Texas to attend College of St. Mary because of Madonna Hall. It’s hard to be away from her family; Gaskin sees other women who have parents or a child’s father nearby to give them a break, and she doesn’t have that.

But when she got sick last fall, her friends in the dorm stepped up and took care of Zaebrii, 2, and Princeton, 1. She feels like her burden is a little lighter by being part of the community there.

“School was never not an option for me,” Alex said. “But this was above and beyond what I expected.”

Even with all the support, it’s not an easy path, said College of St. Mary graduate Robin Whalen. She lived in the dorms with her children while she finished her master’s degree in occupational therapy, and she said she saw many friends derailed by money problems or overwhelmed with tough classes. She took a few years off herself, but she came back.

“I saw so many moms fail, who tried to make it work and couldn’t,” Whalen said.

But she’s also got many friends still working at their degrees from Madonna Hall. Whalen and her kids still get together with their friends there once a week, either on the campus or at their new townhouse. It was hard for the whole family to leave the campus, and her kids miss it a lot — especially their friends, and that self-serve ice cream machine.

Kelly: In 20 years since Maryanne Stevens took over College of St. Mary, her vision became a reality

The College of St. Mary is ready to celebrate Maryanne Stevens’ 20th anniversary as president. When she started, the school was $5 million in debt, and there were private discussions about closing it. But thanks to Stevens’ leadership, the school is debt-free, and the creation of numerous new programs has helped boost enrollment.