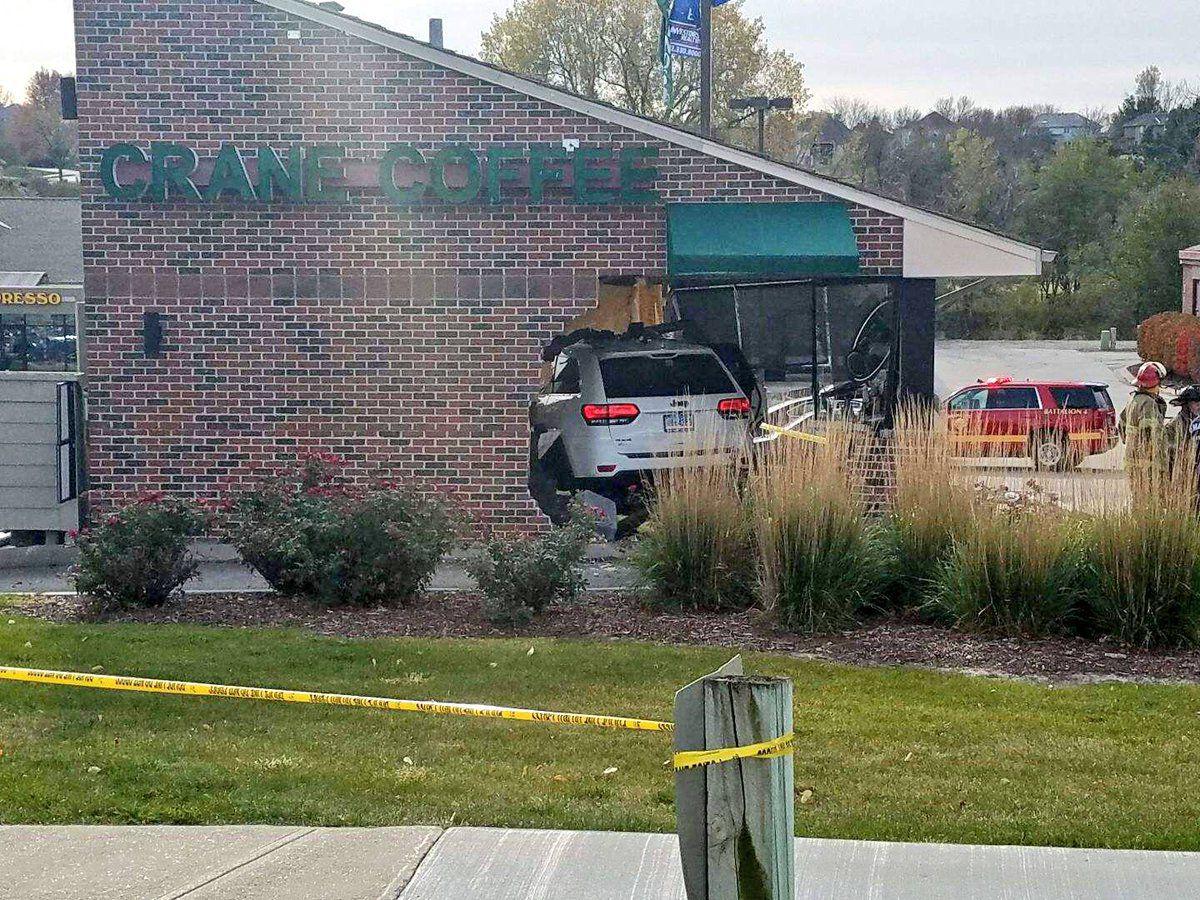 An SUV crashed Tuesday into a Crane Coffee outlet near 132nd Street and West Maple Road. 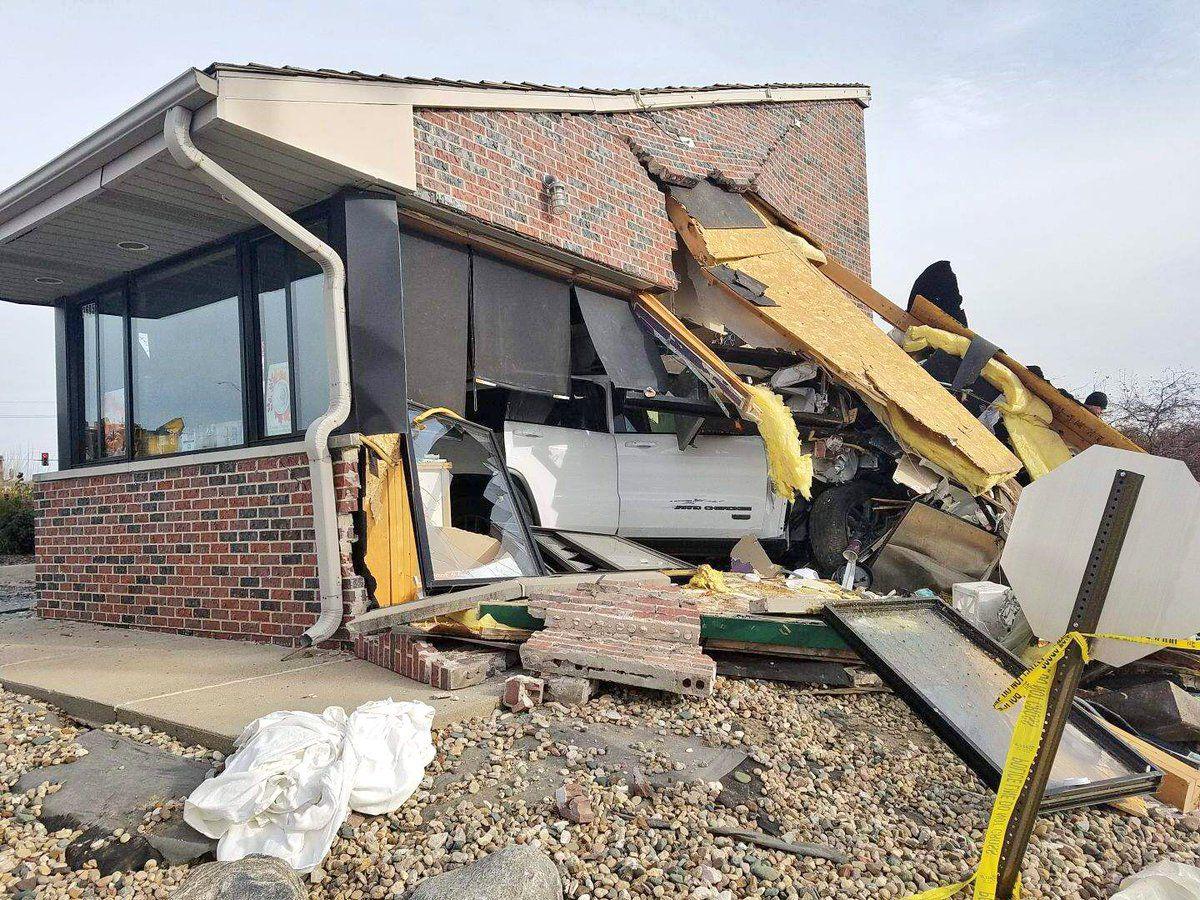 An SUV crashed Tuesday into a Crane Coffee outlet near 132nd Street and West Maple Road.

A wrecked brick building with a white SUV lodged inside. Two young women lying in the parking lot; one unconscious and bleeding from her head, the other a few feet away, screaming “it hurts.”

In the wreckage of the building, bystanders pulling bricks off another woman. She appeared unconscious, her leg twitching.

This was the scene Tuesday morning in a west Omaha parking lot, witnesses said, after a sport utility vehicle crashed into the small but popular Crane Coffee shop, injuring five.

“I was just in shock because I had never seen something like this,” said Olivia Smith, 19, who arrived in the immediate aftermath of the crash. “It didn’t feel real.”

The crash occurred before 9:45 a.m. just east of 132nd Street and West Maple Road when a Jeep Grand Cherokee plowed into the coffee shop at Eagle Run Square shopping center.

Four of the five injured are Crane Coffee employees, said Omaha Police Sgt. Doug Klein. The fifth is the driver of the Jeep.

The employees of Crane and their reported injuries: Rachel Ayala, 36, a possible injury to her esophagus; Danae Humbert, 25, a lacerated liver and a fractured pelvis; Chrisanna McClure, 22, cuts and scrapes; and Jesse Moore, 29, a broken left hand, cuts and scrapes.

One of the workers had been ejected from the building into the parking lot, police said. They did not specify which one.

Ayala was listed in critical condition Tuesday evening at Creighton University Medical Center-Bergan Mercy, Humbert was listed in serious condition, and McClure had been treated and released. Moore was not on the hospital’s list.

The driver of the SUV was identified as Jake Yestingsmeier, 33, of Omaha. He suffered minor injuries from the deployment of the airbag, police said.

Yestingsmeier, who was treated and released, told police that he blacked out and didn’t recall what happened. A woman who answered the door at his home said he would have no comment.

Neither speed nor alcohol appears to have been a factor in the crash, police said. An officer conducted a drug-recognition evaluation on Yestingsmeier, but it came back negative.

Witnesses said doctors and nurses from the Nebraska Medicine clinic at the shopping center rushed to the scene and provided aid.

Henry Truong, 42, owner of the Pretty Nails salon across the parking lot from the coffee shop, provided blankets for victims who needed them.

Truong said he asked the driver what had happened.

“He said he didn’t remember anything,” Truong said.

Smith, who works at the Hank & Ax hairstyling salon, also in the shopping center, described the doctors and nurses as calm as they did their work. “There wasn’t a lot of yelling.”

“I just hope the families are doing OK, the victims are doing OK,” she said. “I hope everything gets figured out with the driver.”

Klein said the SUV was eastbound on West Maple when it veered to the right, went off the road, crossed a grassy area and another road before entering the parking lot where it smashed into the Crane Coffee shop.

The 312-square-foot building is a total loss, police said.

No tire marks indicating braking were evident outside the building.

Yestingsmeier worked at a restaurant in the same shopping center. He was probably on his way to his shift at Bruno’s Pasta at the time, said Charlie Yin, an owner of the group that operates the restaurant.

Late Tuesday afternoon, after the police had left and the SUV had been pulled from the wreckage, chunks of brick, mortar and insulation had been pushed back on to the island where the building sits.

In the parking lot, Mary McElwain, 51, fresh off her shift as a medical assistant, sat in her car and gazed at the wreckage, sad and shocked.

She swings by every other day or so, for a large hazelnut white mocha. She was not aware of the crash until she saw the wreckage.

The coffee shop staff, she said, is always upbeat. They remember what she usually orders. If she’s grumpy when she pulls in, she isn’t when she leaves.

“By the time I’ve got my coffee, they’ve put me in a better mood,” she said. “The girls are always friendly.”

Rachel Ayala and her fiancé, Jesse Moore, were going around taking pictures of employees dressed up in Halloween costumes, Moore's grandfather said.