A surveillance camera inside Tobacco and Vape at 3202 L St. recorded this photo of the suspect. 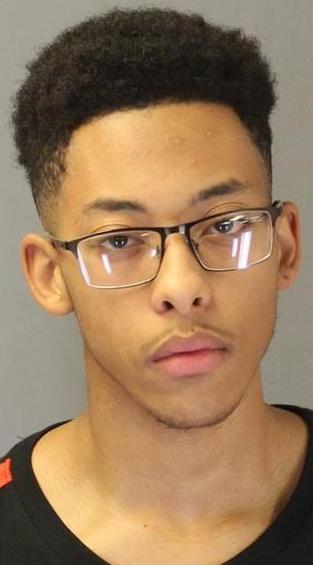 At the heart of two shootings that occurred last month within two hours of each other, an Omaha detective said Friday, was the need to acquire more guns.

Bahy Altairi, 21, was fatally shot Oct. 2 as he worked at his father’s Tobacco and Vape shop at 3202 L St. Prosecutors said 17-year-old Jacobi Terry knew Altairi kept a Glock handgun inside a podium that the store’s cash register sat on.

Hours later, Backora said, 27-year-old Jared Sedlacek was struck in the back by an errant bullet after Terry fired shots when a deal to purchase another firearm went sour outside a home near 75th Street and Hartman Avenue.

Much of the evidence against Terry comes from a police interview with his alleged accomplice, Marshaun Box, 17, who told police that he was nearby when both shootings occurred — in the driver’s seat of a Dodge Nitro belonging to Terry’s mother during the convenience store shooting and steps away during the residential shooting.

Box has been charged in connection with the second shooting and has a preliminary hearing scheduled for Monday. Officials say a third teen was in the front passenger’s seat for both shootings. He has been charged as an accessory in juvenile court.

Douglas County Public Defender Tom Riley noted that police have not recovered the .22 caliber rifle used in the shootings or the Glock they say Terry stole from Altairi.

A foster brother who lives in Terry’s home told police that he and Terry heard news of the shooting on the radio the next day, and Terry told the brother that it was him, Backora said. Terry then drove to an alleyway near 33rd and Cass Streets and ditched the rifle, which was wrapped in cloth inside a grocery sack, the brother told investigators. Police canvassed the alleyway with a K-9 that can detect firearms, but they did not find the weapon.

Officers spoke to the school resource officer at Central and got the full name, school identification photo and stills from video surveillance of Terry walking alone in the school hallway on the morning of Oct. 2. The shootings occurred later that night.

In the still photos, Backora said, Terry was wearing a jacket that is similar to the one worn by the assailant shown in the surveillance video from the Tobacco and Vape shop. Detectives also confirmed that Terry drove a Dodge Nitro to school.

Box told investigators that Terry had contacted him that night, asking if he wanted to do a “lick,” or robbery, for a “glizzy,” or Glock. Box said he agreed and said he stayed in the driver’s seat while Terry went inside the tobacco shop to grab the gun. Terry had gone to that shop once before that same day, said Chief Deputy Douglas County Attorney Brenda Beadle.

Altairi died of a gunshot wound to his chest. A .22 caliber shell casing was found in a cigarette lighter display case, Backora said.

Box had been communicating with a man about buying a Colt .45 for $100, Backora said, and the trio then went to the man’s home near 75th and Hartman to make the purchase.

Box and Terry got out of the vehicle to meet the man and inspect the gun, Backora said. Box said he had to return to the car to get the money and then heard shots. The group fled in the Dodge Nitro without the Colt .45.

Sedlacek was inside another home, going up the basement stairs. He didn’t have any relation to the suspects or the man selling the gun, police said.

Officers recovered the projectile that was lodged inside Sedlacek and noticed apparent bullet holes near the home, but did not find shell casings.

After the hearing, Beadle said that although Terry has no previous record, it is still shocking that a young teen had a gun in his possession and used violence to get more guns.

“It’s mind-boggling. Kids with guns are getting younger and younger,” she said. “Guns are plentiful, and it seems to be something they desire to have. And they go to great lengths to get. It’s very, very disturbing, the ages of all of these individuals.”

After Omaha teen killed a clerk, prosecutors say, he shot and paralyzed a bystander

“When you have a juvenile with a gun, nothing good can ever happen with that," Chief Deputy Douglas County Attorney Brenda Beadle said. "It’s just a chilling, terrible, horrific murder.”