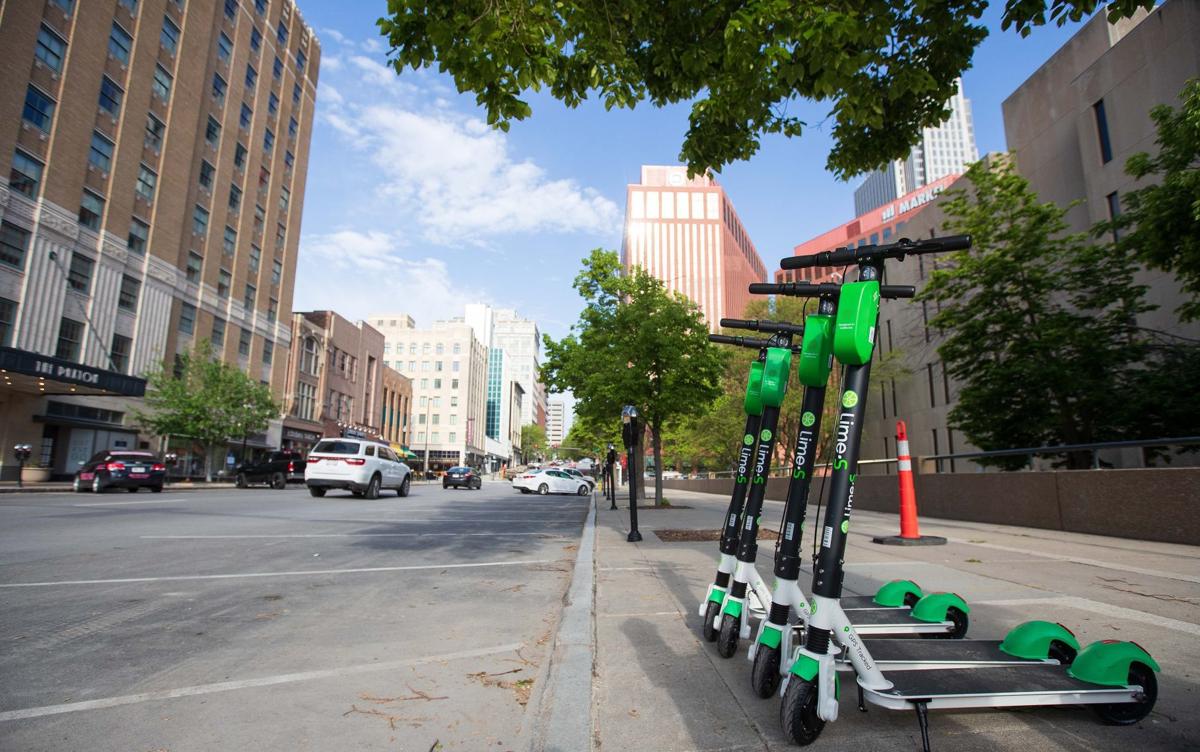 Electric scooters from two companies, including Lime, pictured, first showed up in Omaha on May 15. Whether they will come back is yet to be decided. 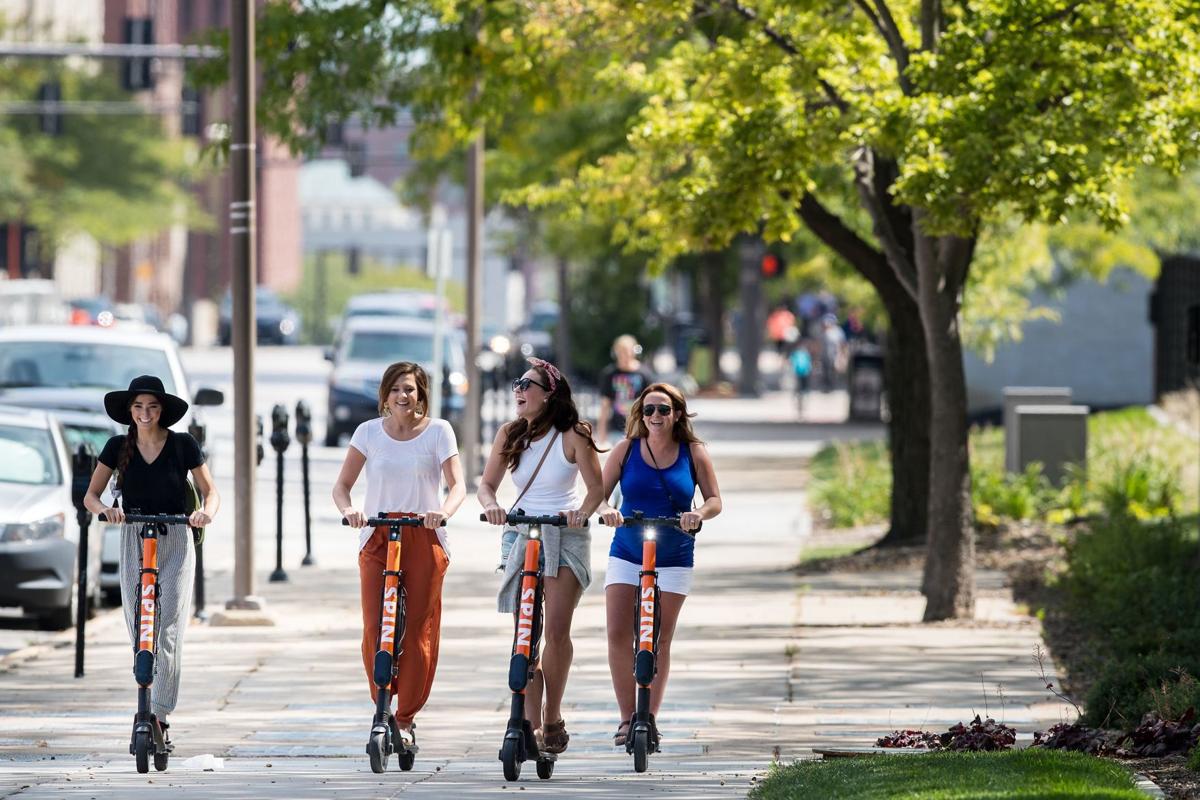 From left, Christine Miller, Kelsey Koch, Taylor Krapp and Jenny Wiese head west along Farnam Street to The Grove Juicery on Spin electric scooters in September. More than 208,000 rides were recorded during the scooters’ six-month trial run, but public response has been mixed.

Electric scooters from two companies, including Lime, pictured, first showed up in Omaha on May 15. Whether they will come back is yet to be decided.

From left, Christine Miller, Kelsey Koch, Taylor Krapp and Jenny Wiese head west along Farnam Street to The Grove Juicery on Spin electric scooters in September. More than 208,000 rides were recorded during the scooters’ six-month trial run, but public response has been mixed.

The scooters are grounded as Omaha’s pilot effort on the new mobility tech comes to an end, and their future in the city is up in the air.

In interviews with The World-Herald, three key city leaders expressed some uncertainty, concern and hesitation about scooters and the possibility of their return.

Mayor Jean Stothert, who authorized the pilot program, said she’s “on the fence” about the idea of having scooters back.

City Councilman Chris Jerram, who represents most of the focus areas in the trial run, said scooters are too dangerous right now to be used on roadways without riders wearing helmets and without other safeguards, such as on-street protected bike and alternative vehicle lanes.

Councilman Pete Festersen, who represents the trial area in Benson, said he’s reserving judgment about the scooters until he sees the data collected during the pilot, which started in May and officially ended Friday.

Festersen said he loves that the scooters gave users a transportation alternative and provided people with an element of fun and spontaneity. But he said he also understands people’s concerns about safety and clutter as scooters are dropped.

“It seems citizens either love or hate them,” he said.

The scooters were certainly popular for riders as they burst onto the scene. According to the city, scooter companies Lime and Spin recorded 208,692 rides as of Wednesday.

But some people found the scooters to be a menace, as riders zoomed past them on sidewalks where they weren’t supposed to go or broke other scooter rules.

Like with helmets. Riders had to agree to wear a helmet to ride. Few riders actually did.

Or with age restrictions. Riders are supposed to be at least 18 years old. In September, Lime and Spin tightened their procedures after a 9-year-old was seriously injured in a scooter crash. As of September, Omaha-area hospitals treated 65 scooter injuries.

Do you want scooters in Omaha permanently?

Stothert said public opinion will be important in deciding the future of scooters. She said there’s no guarantee the city will move forward with scooters.

For the next step, the city will collect a variety of data on the scooters: ridership numbers from the companies, police citations and warnings, injuries recorded at hospitals and survey results. The city has been surveying public opinion online and will be surveying riders.

Another question involves people’s motivation behind renting scooters and to what extent scooters took cars off the street. Other cities have found a portion of riders are using scooters instead of taking a car or a rideshare. Rides may be short, but scooters have been called “last mile” transportation.

Stothert said the city will be reviewing a report from Portland, Oregon, which ran a scooter pilot program in 2018.

She also said she’s disappointed with the scooter companies’ public education and outreach. Lime, for instance, held a safety event last week — one week before the pilot program’s end — in below-freezing temperatures.

The mayor said that made no sense and that the scooter companies need to do vigorous public education and outreach.

“I don’t think they did a very good job,” she said.

Probst said the pilot program was a success and showed the demand for scooters in Omaha.

“What the demand for the program has shown is micromobility is not going to go away,” he said. “People are looking for alternatives to the car.”

Probst said he has not seen a city end its initial program and “call it a day.” But sometimes, he said, the regulations change.

Asked about helmet use, Probst said Lime wants to make it a habit, calling it a focus for the company. He said Lime wants to offer helmet distributions. But also, some people’s habits will change when they know they can regularly use scooters as a form of transportation, he said.

Probst also acknowledged that riders go on sidewalks. But he said many riders don’t feel safe in the street, and having protected bike and scooter lanes make all the difference for those riders.

Lime will be providing data on which corridors had the highest ridership, which he hopes will lend the city information on what streets might benefit from protected lanes.

“Those are places we really want to work with the city on addressing,” he said.

The issue seems destined to go before the City Council. If the city moves forward with scooters and scooter rules, Stothert said she would propose an ordinance.

If the answer is “no,” the council could consider a ban to keep scooter companies from offering rides without regulations.

Jerram said his constituents and others have made clear how opposed they are, although he added that he recently received about 20 similar emails of support.

Julie Harris, executive director of Bike Walk Nebraska, said all major cities are grappling with how to handle scooters.

Harris said she supported them as another mode for active transportation. But if Omaha doesn’t want scooters on sidewalks, it needs safer infrastructure, such as protected bike lanes, she said.

“In theory, we really like scooters. But we need safer places for them to be.”

A final report from Omaha’s scooter pilot program won't be available until early 2020, or sooner. Then, the mayor and City Council will discuss the future of scooters in Omaha.

Over 200,000 rides with less than 100 hospital visits. I'm guessing the number of vehicle/scooter accidents were virtually non-existent since we didn't really hear much about them. The concerned citizens with "the sky is falling" prophecies about the scooter business were wrong. The numbers don't lie. Please don't let the opinions of a bunch of grumpy old timers who never leave their houses dictate the continuation of this program. It's clearly popular, and much safer than predicted. I hope the City Council makes the right decision.

@Ryan Douglas--you should note that the grumpy old timers been around the block many times, and without an electric scooter. They also know something about crying wolf, besides what you say about their perception of the sky is falling, let alone never leaving their houses and dictating where this program is going. So, in all fairness to development in this town, and the perception of catering, exceptions being made, along with the rule of law violations being monitored, especially placing public safety on the altar of progressive millennialism, your points of view are certainly interesting.

I would bet any amount that the rule of law violations by cars far outnumber the violations by scooter per 100 cars and scooters.

In traveling thru Omaha ( I just visit, don't live there) , I regularly saw large groups of scooters on sidewalks so I suggest there was need for more police enforcement. The agreement users sign up to is a joke because how many know and understand what was in those several pages . With regards to the geo-fencing was supposed to deny access to certain areas downtown, I saw scooter all around the CHI center and stadium..... ..and the reward for illustrating the disregard for scooter rules of course goes to "Scooter Girl" for flagrantly proving the current scooter rules don't work.

To Omaha: dropping a clearly successful pilot program already commonplace in all the cities our young people leave for which has made living downtown and midtown much more enjoyable not to mention accessible given parking limitations in those areas I say ‘ok boomer’. Omaha visitors used them in droves downtown. Police were courteous about reminding us to use the street. Fix our streets and expand our bike lanes. Move forward Omaha.

I can't get away from these nuisances. Moved to Omaha 1 year ago after living at the beach in San Diego where scooters were everywhere. Illegal to drive on sidewalks, but somehow were constantly hitting pedestrians. Driving the wrong way down the street and running lights. People flying off them into traffic. Riders going to up. The are toys for people with no clue how to ride.

Now live in the Blackstone with scooters all over. Pretty much the same activity. Saw a woman riding south on Farnam at 38th ejected from the scooter and landing within 2 feet of an oncoming SUV.

I'd move again, but they seem to just follow wherever I go. This must be my fault.