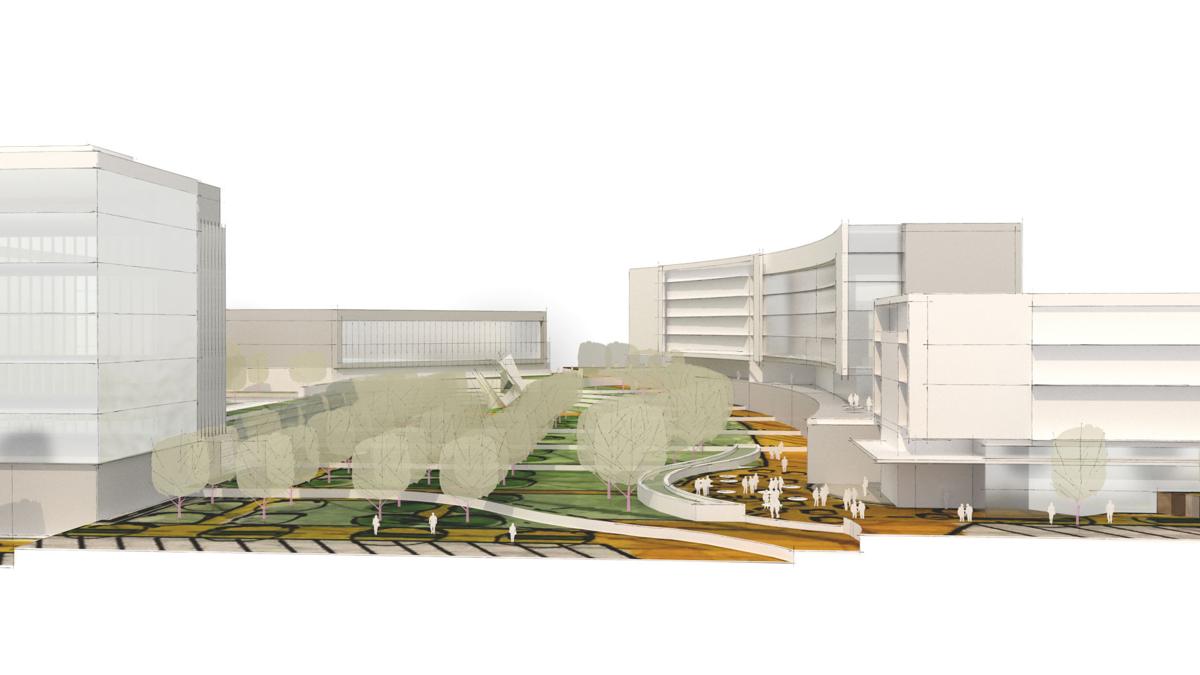 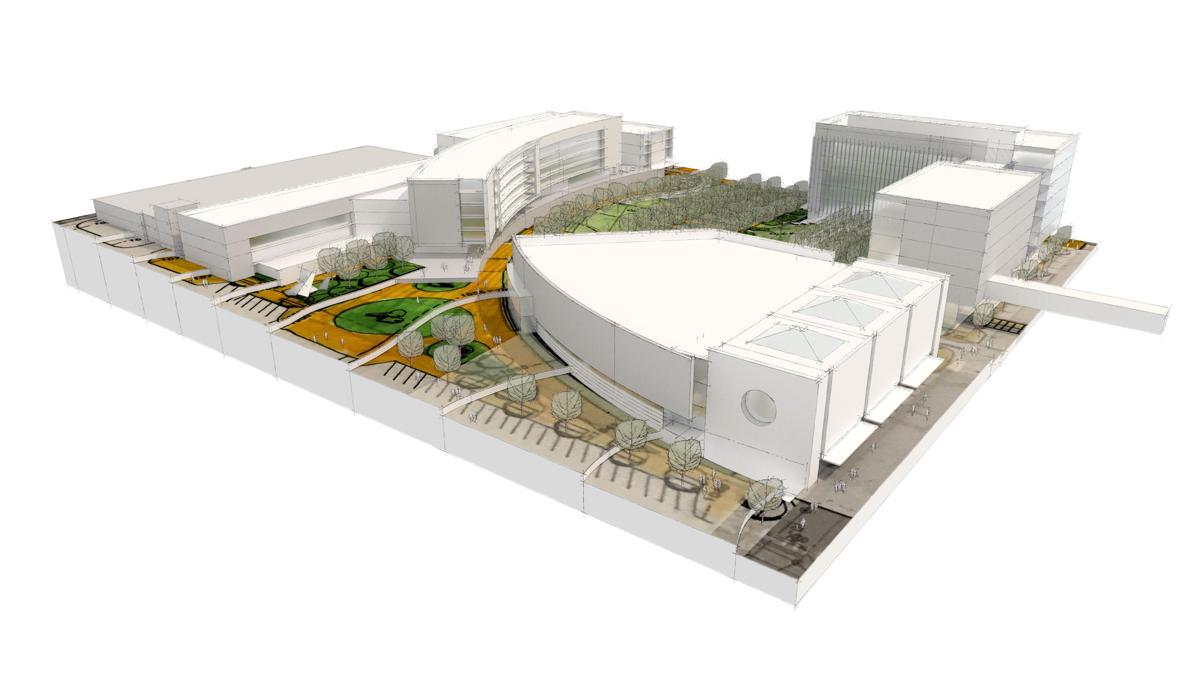 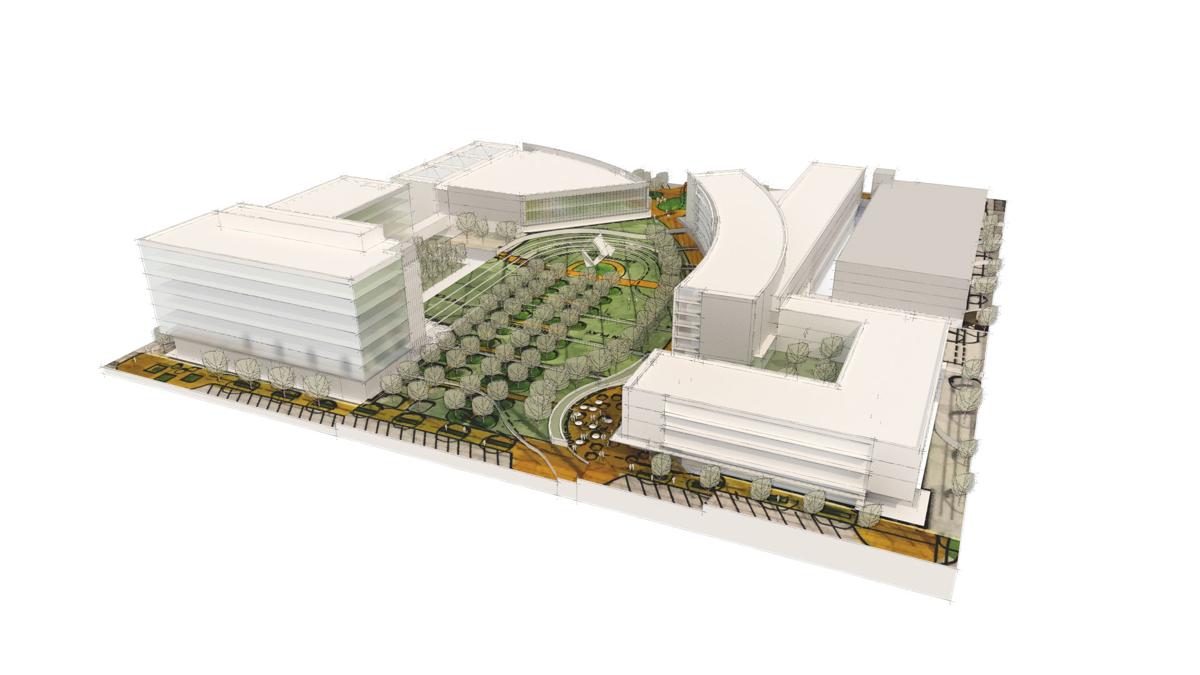 That’s smaller but roughly along the lines of what the developer, Tetrad Property Group, and Omaha Mayor Jean Stothert have talked about since she chose the developer in 2014.

Tetrad’s outline for its Civic Square development will be on the agenda of the Omaha City Planning Board’s next meeting, May 3, the Mayor’s Office announced in a press release Thursday.

The release says the developers envision a grocery and other retail, a fitness center and civic buildings.

Engineers’ drawings submitted to the Omaha Planning Department show four buildings, the tallest of them seven stories, arranged around an amphitheater and promenade.

The two other buildings have portions labeled as “civic”; a public library has been talked about as a civic institution at the site.

One building would have four floors of a civic use above ground-level retail. Another would have three civic floors below four residential stories.

A parking garage on the block would remain.

The four buildings combined would have a total of about 740,000 square feet. The development could cost $200 million, the mayor’s press release said.

Tetrad initially had proposed an approximately $300 million development with four buildings, including a 16-story office tower.

The press release Thursday did not say how much a library would cost, where the money would come from or when the development might be built.

The preliminary plat application is the first step in a lengthy government approval process for a development. Plans typically become more specific as that process moves along. City Council approval would be needed.

There is no formal proposal for a new downtown library, but the idea of replacing the W. Dale Clark Library has been circulating for some time.

Stothert said in December that she thought the former Civic site would be the perfect place for a new downtown main library building.

The Omaha Public Library board of trustees and staff have a new facilities master plan. They’re looking at what’s needed throughout the community: what libraries need to be renovated, which need repairs and where new libraries might be needed, said Mike Kennedy, a board member.

The downtown main library “is dated and it needs to be upgraded,” Kennedy said.

He said he appreciated Stothert’s commitment to the library system, and he called a new main library at the Civic site “a great concept.”

That said, Kennedy said there would have to be a lot of discussion about cost, sources of funds, needs and public opinion.

He noted that a City Council vote would be needed, and depending on the proposed funding, a public vote might be required.

“It’s something that we, the mayor, the council and the community are going to have to talk about a lot over the next several months,” Kennedy said.

Laura Marlane, executive director of the Omaha Public Library, said no specific plans for a new library have been proposed. She noted that preliminary plans for a development often change. She has seen cases of civic uses such as libraries being included in early plans, then not materializing.

But Marlane said that being included in the Civic site project “could be a really wonderful thing for the library.”

City Council President Ben Gray, whose district includes the Civic site, said he hadn’t heard anything about the proposed redevelopment for a long time.

He said no one had seriously discussed the possibility of a new library there with him or, as far as he knew, with the rest of the council.

Gray cautiously welcomed the news that the development is taking an incremental step forward, at least on paper.

“Development is always good, especially in my district,” Gray said, adding that he’s glad to see more residences proposed because more people living in the area could be a catalyst for further development. He said he would probably support a new library at the location.

“I’ll be anxiously waiting to see what the final plat is going to look like,” Gray said.

On Thursday, Stothert said the Civic redevelopment plans are moving along at the pace the city wanted. After some more cleanup on the site, the land will be “shovel ready” this spring, she said.

The W. Dale Clark Library will be available for redevelopment, although the city will first build a new downtown library, Stothert said. The city has had the Dale Clark property appraised and is open to listening to any offers.

The Planning Board meeting will be six days before Stothert and challenger Heath Mello face off in the city’s general election for mayor.

Mello called Stothert’s announcement Thursday “yet another example of Mayor Stothert moving forward on a big issue without input from the public.” He said the Civic plan “just isn’t ready for prime time.”

Mello has said he wants the city to create a special designation for an “innovation district” at the Civic site that would facilitate entrepreneurs, startups and tech companies.

Kennedy said Mello was uninformed despite the discussion occurring in public since 2014. Kennedy noted that The World-Herald and TV stations had done several stories on the possible move.

“We’ve had several discussions in our library board meetings,” said Kennedy, a longtime Stothert supporter. “This has been known in the development community. This has been open for public comment for the last two years.”

Photos: Civic Auditorium demolition and events through the years

While nothing has been decided, Mayor Jean Stothert said there could be a park or other green space on the land. And she acknowledged that there’s talk about moving the YMCA, the Children’s Museum or a city library to the four-block downtown site.