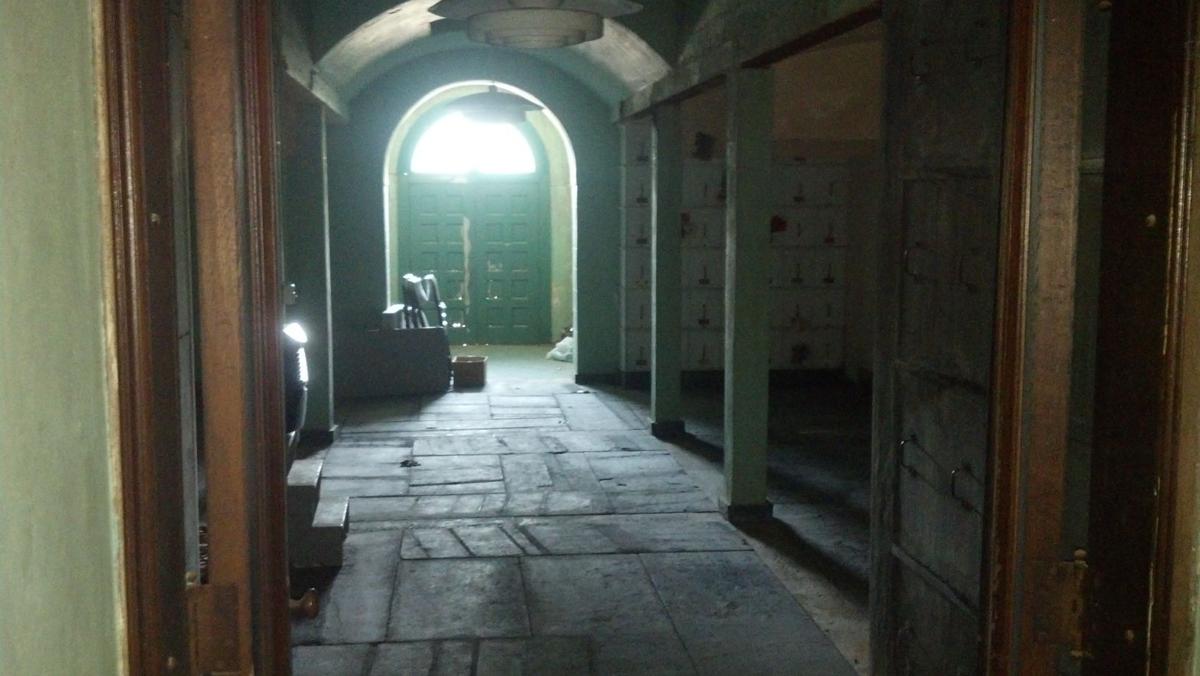 A room inside the chapel at Forest Lawn Cemetery in Omaha. Investigators with D.A.M.M. Ladies of the Paranormal reported seeing a large black shadow block out the light in the doorway.

A room inside the chapel at Forest Lawn Cemetery in Omaha. Investigators with D.A.M.M. Ladies of the Paranormal reported seeing a large black mass in the room. 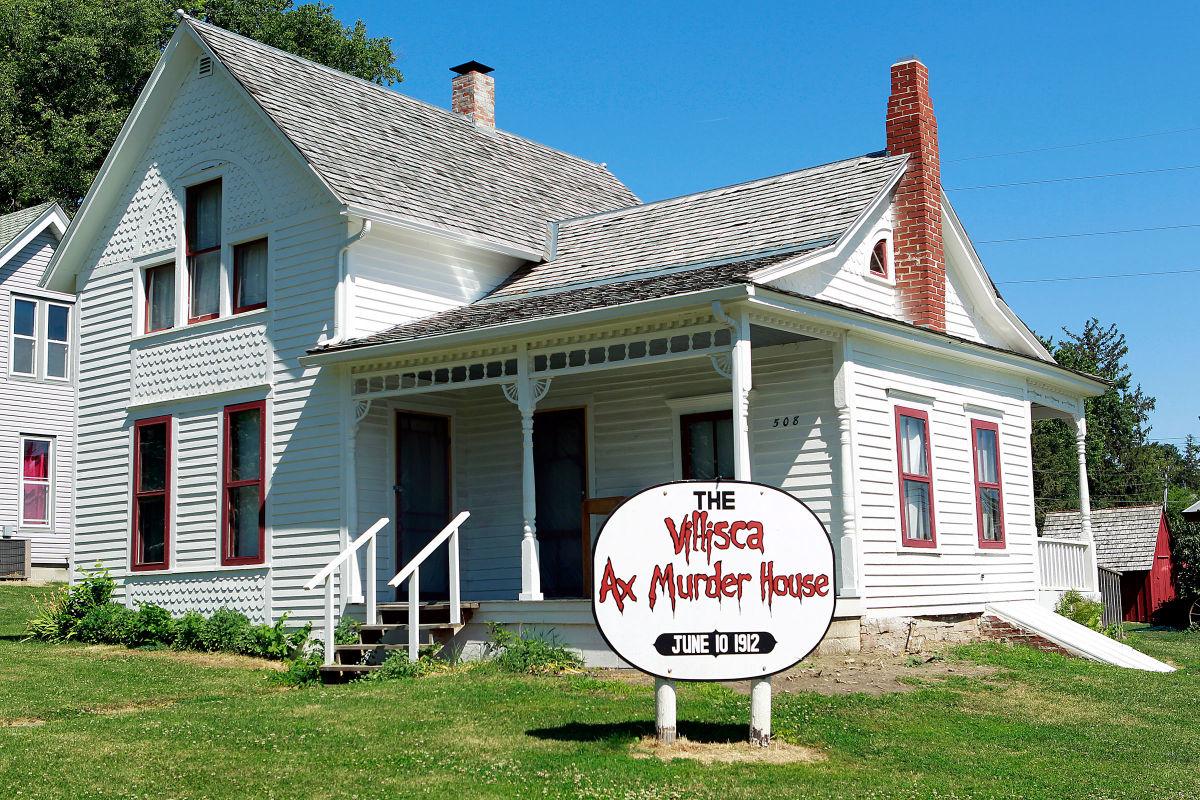 The old Moore residence at 508 E. Second St. in Villisca, Iowa, is also known as the Villisca Ax Murder House. It is the site of one of the largest unsolved murders in history. A total of two adults and six children were killed in the wee hours of June 10, 1912. All were bludgeoned to death by an axe. Since, the property has been a hotspot for those interested in the paranormal, numerous books, articles, TV movies and documentaries have been produced on the cold case. 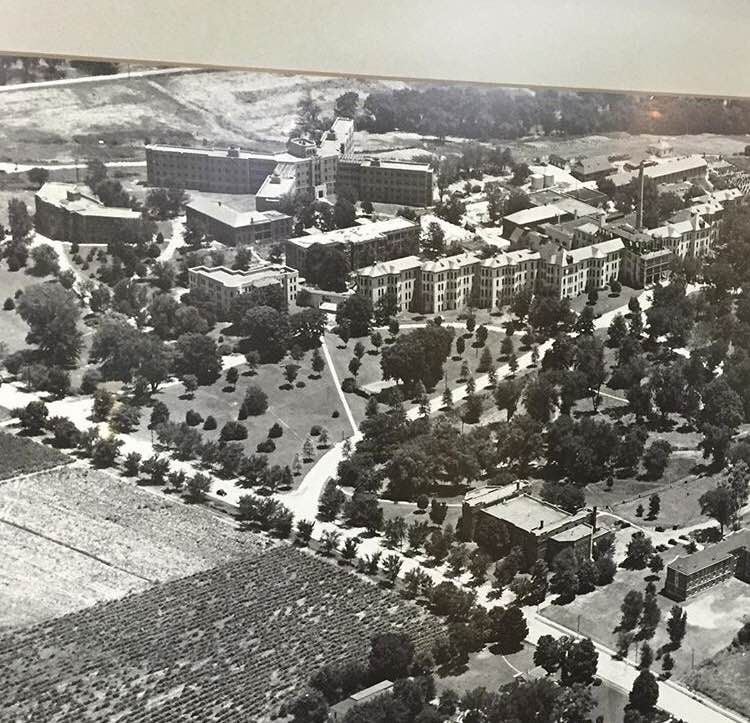 More than 1,000 metal objects were removed from a Glore Psychiatric Museum patient's stomach in 1929. The objects are on display at the museum. 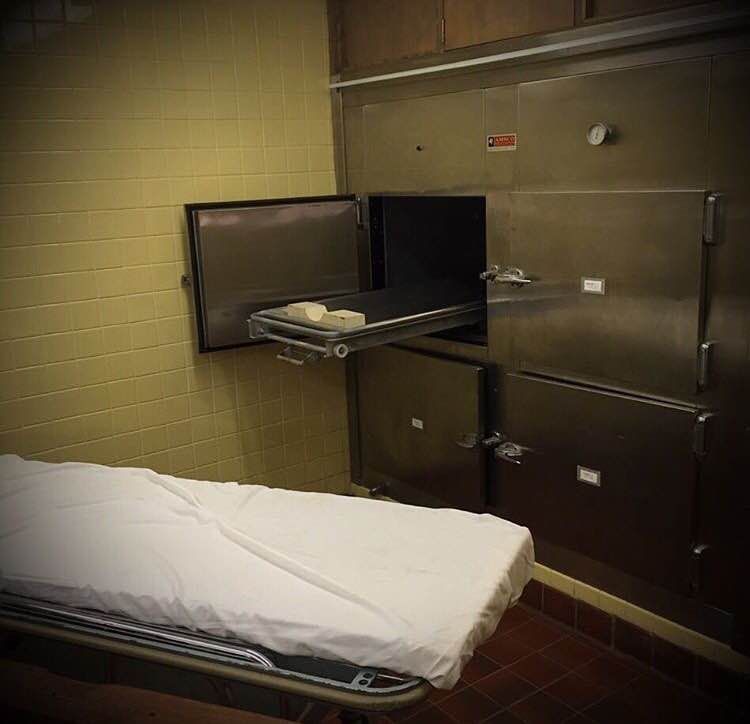 Though the morgue at the Glore Psychiatric Museum is not currently in use, the refrigeration units are still working and the slabs are cold.

With Halloween fast-approaching, we asked area paranormal researchers: Where is the most haunted place you've investigated?

Have you ever wondered about the things that go bump in the night? Do you believe in ghosts?

With Halloween quickly creeping up on us, we asked some local paranormal research groups to name the most haunted places they've investigated. Here are their responses:

The old Moore residence at 508 E. Second St. in Villisca, Iowa, is also known as the Villisca Ax Murder House. It is the site of one of the largest unsolved murders in history. Click to enlarge.

By Kelley Kennedy of the Paranormal Research and Investigative Studies Midwest

One of the most haunted places we have investigated is the Villisca Ax Murder House. We have been investigating at Villisca since 2005 and have captured a lot of evidence through the years. This is the best EVP we have captured, in video format:

The history of the house is what attracted us to the location. The constant evidence and personal experiences keep us coming back. The first time I was there 10 years ago, I saw an apparition of a child’s hand wave at me. When you go to Villisca, it feels like you are going home to your kids. It’s really a weird feeling.

According to PRISM’s website: The Villisca Axe Murder House has been investigated by many ghost hunters and paranormal investigative teams from all around the Midwest. Many have spent the night in this house and reported similar experiences. Some of these experiences include the feeling of a heaviness reported around the main stairwell of the house and a strange change in appearance in the upstairs bedrooms at night. Various video and still shots have been taken with orbs and light trails appearing in them, and numerous electronic audio phenomena (EVP) have also been captured in the house.

The real thrill ride of a night spent at the Villisca House begins around 2 a.m. It is at this time of the night when a train often passes through the town of Villisca. The whistle of the train is thought to trigger the residual events of the murder that took place on June 10, 1912.

It is widely believed that the killer(s) used the masking sound of the locomotive to sneak throughout the house and murder all its inhabitants, one by one. Many investigators have noticed a light fog filling up the master bedroom at the point when the train whistle is first heard. This fog moves from room to room, just as the killer(s) might have.

Once the fog dissipates, it is followed by the sound of dripping blood.

A room inside the chapel at Forest Lawn Cemetery in Omaha. Investigators with D.A.M.M. Ladies of the Paranormal reported seeing a large black shadow block out the light in the doorway. Click to enlarge.

By Angela LaChapelle and Marcia Ponciano Wallace of D.A.M.M. Ladies of the Paranormal

One of the most haunted locations that a teammate and I have investigated here in Omaha is the chapel located at Forest Lawn Cemetery.

Three years ago while working with a different team, we were scheduled to conduct a Halloween event at the cemetery. A few weeks prior, we visited the chapel to clean it up and get it ready for the class. While in the basement, I heard a noise in the adjacent room and called out to my teammates, only to find myself alone. I instantly had a feeling of dread come over me.

I knew something was there with me - and it didn't want me down there.

I decided to calmly leave the basement while trying not to show fear. While walking up the marble staircase, I turned around to look because I had a feeling something was there, and a large black mass jumped at me. I could feel it on me like electricity running through my bones as I continued to walk up the stairs. My knees also went weak and I felt extremely ill.

When I reached the top of the stairs, I told my teammates what had happened and realized I had been carrying an audio recorder which captured the whole event. On the recorder – at the point when I had turned around on the staircase and saw the black mass – something can be heard saying “get out.” Then as I was walking up the stairs, it was as if something was breathing loudly and heavily on me. It took me a few minutes to compose myself before going back to the basement – this time not alone.

A room inside the chapel at Forest Lawn Cemetery in Omaha. Investigators with D.A.M.M. Ladies of the Paranormal reported seeing a large black mass in the room. Click to enlarge.

Two weeks later, we returned to the cemetery to conduct our Halloween event. Marcia (Ponciano Wallace), my teammate, had a group of people down in the basement of the chapel. While looking at the marble staircase, she saw a shadow move across the wall and then move into the room she was in. As it got closer to her, it got larger. It stopped near a doorway and seconds later it lunged at her – doing the same thing it had done to me weeks prior. She felt the same sensation of electricity through her body, her knees went weak and she instantly felt ill.

Knowing that whatever was down there didn't want her there, she quickly and calmly gathered up her group and took them upstairs. She didn't want it to try to attack any of the participants of the class.

That same evening, a large group of us were in the basement area again. I had my hair pulled and my name said clearly on the spirit box. While looking out into the hallway, I again saw a large black mass completely block out any light coming in through the doorway. It simply stood there for a moment and then moved away.

Several people had experiences that evening – both inside the chapel and in the cemetery. We also captured several EVPs while in that chapel area. When anyone asks our team “where was the scariest location you've ever investigated?” our answer is always unanimous – the chapel located in Forest Lawn Cemetery.

There are many lost souls who still walk the ward at the Glore Psychiatric Museum in St. Joseph, Missouri. Also once known as Missouri State Lunatic Asylum Number 2, this place has more than 2,000 confirmed deaths.

(According to hauntedplaces.org, the Glore Psychiatric Museum is rumored to be haunted by deceased patients. Unexplained sounds heard here include a woman’s voice asking for help, whimpering and crying. Some visitors have allegedly reported seeing the shadowy figure of a man, and other witnesses reported an apparition running along the basement hallway and shouting “Why are you here? Get out!”)

Though the morgue at the Glore Psychiatric Museum is not currently in use, the refrigeration units are still working and the slabs are cold. Click to enlarge.

The morgue was also used for several years after the psychiatric ward closed. While they are no longer in use, the morgue’s coolers still work to this day.

It was a very interesting investigation. We did capture some EVP’s, one of which sounds like a guy singing.

More than 1,000 metal objects were removed from a Glore Psychiatric Museum patient's stomach in 1929. The objects are on display at the museum. Click to enlarge.

One patient who died on the operating table had swallowed over 1,000 metal objects such as pins, nails, tacks, etc., made their presence known during the investigation by moving objects on command that belonged to her.

This will be seen in our new television show - “Unknown Ghost Files.” For more details and previews, check out TRIP’s Facebook page: Facebook.com/Unknown-Ghost-Files.

Do you have a spooky story?

Do you have a story about ghosts or a haunting experience? Share it with us. Email your stories and any photos to goodnews@owh.com.

The true story behind the Black Angel of Council Bluffs

The superstitions have surrounded the statue for decades. And they baffle historians who know the story behind the angel — the story of Ruth Anne Dodge, and the dreams she had just before her death.