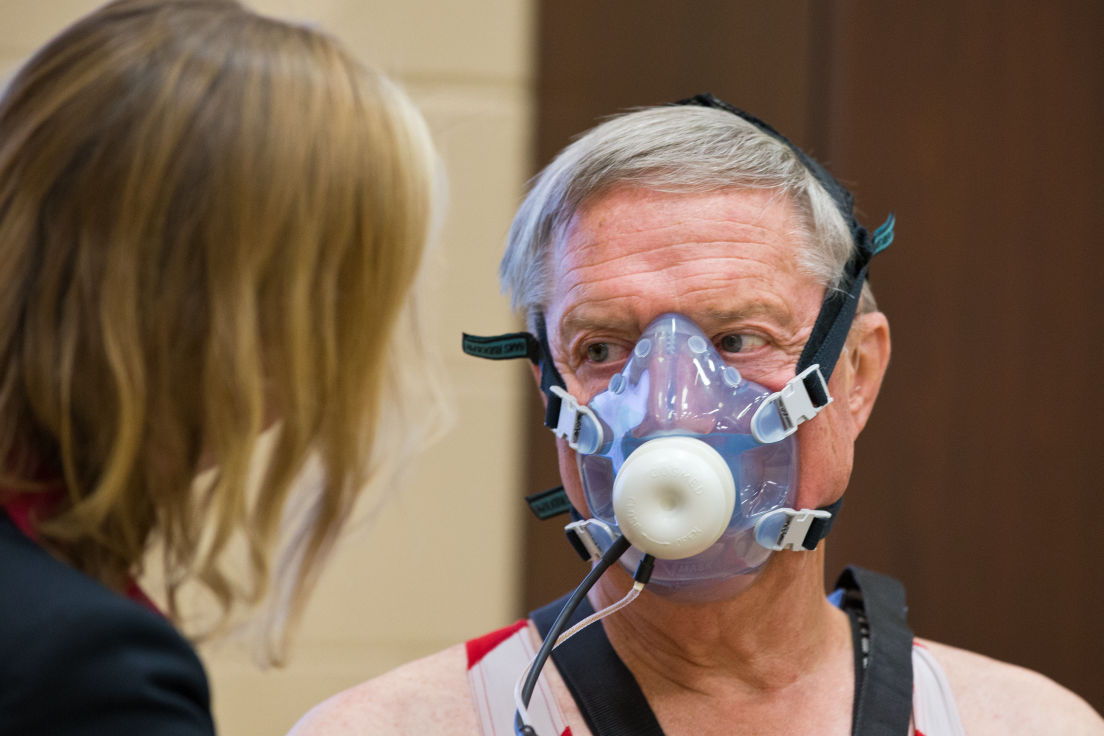 Dr. Jenna Yentes talks with Dave Frenzer on Tuesday before a test at the biomechanics research center that measures breathing and walking at the same time. 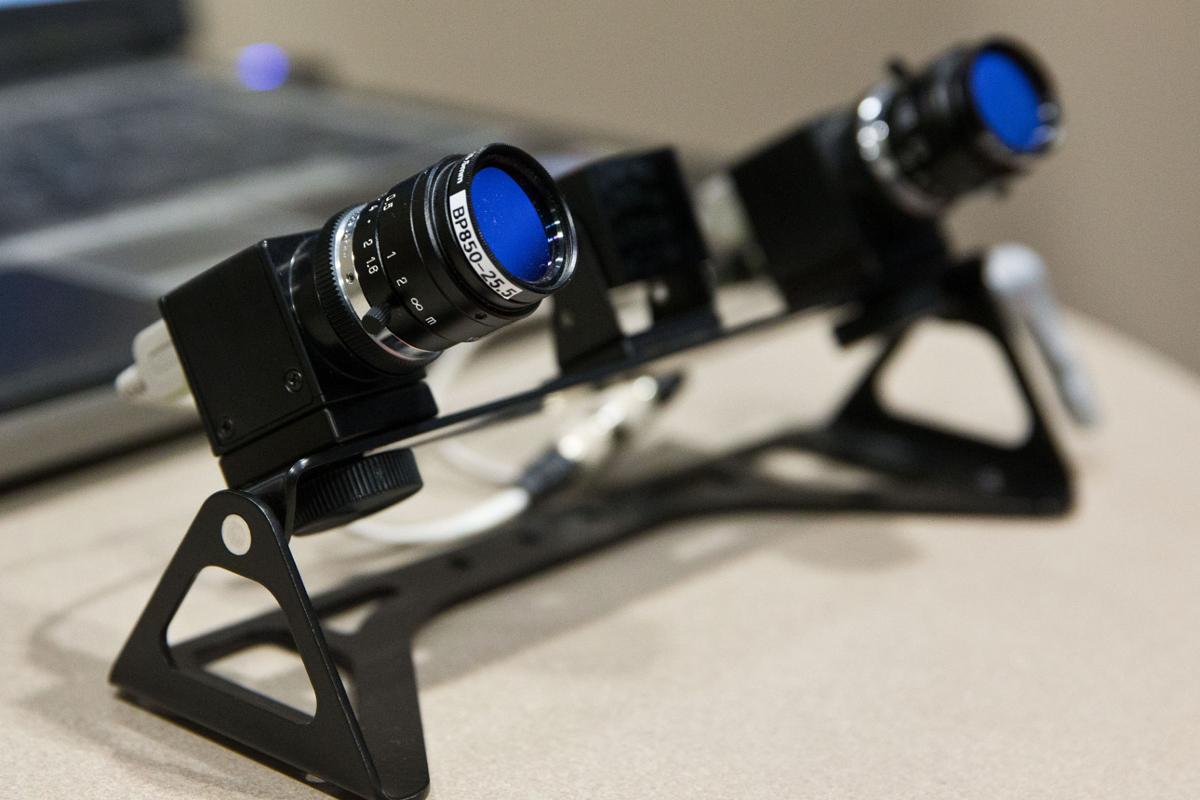 Cameras that track eye movement to see what images the subject in the test watches on a screen. 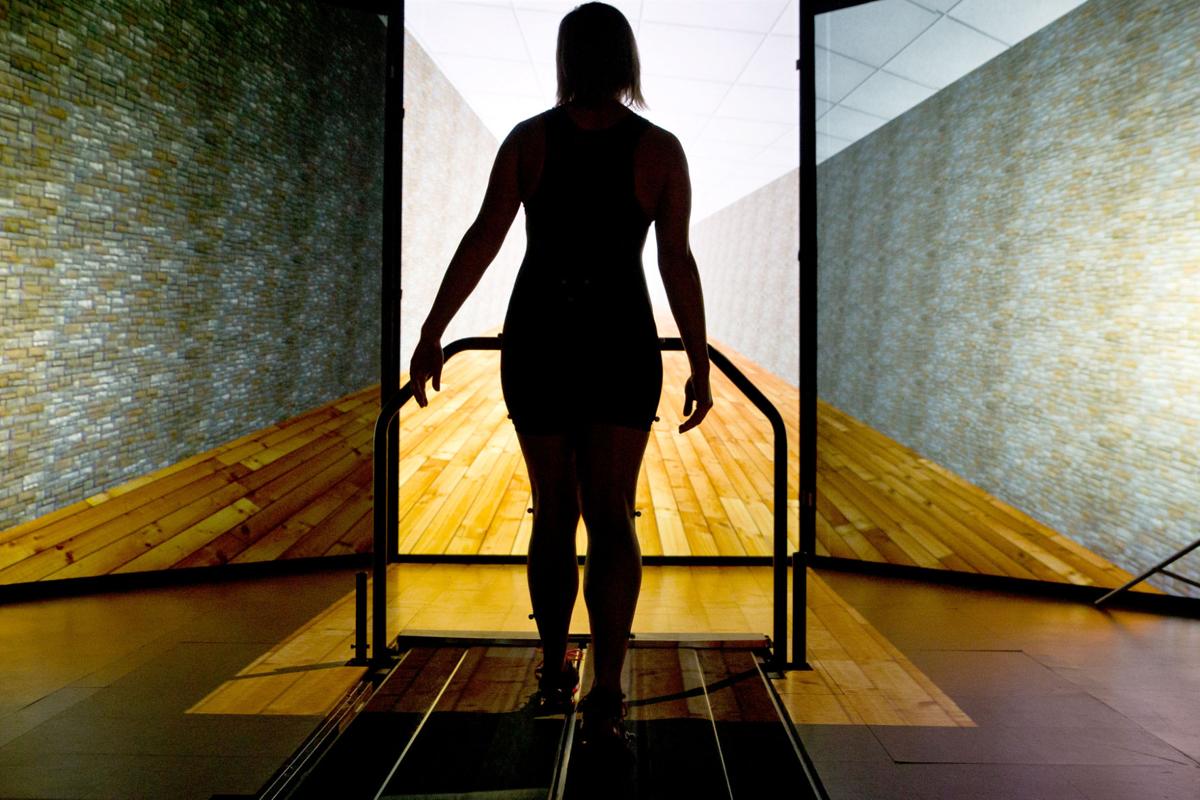 Jessica Fujan-Hansen demonstrates the virtual reality laboratory by walking on a treadmill in front of images projected on screens. 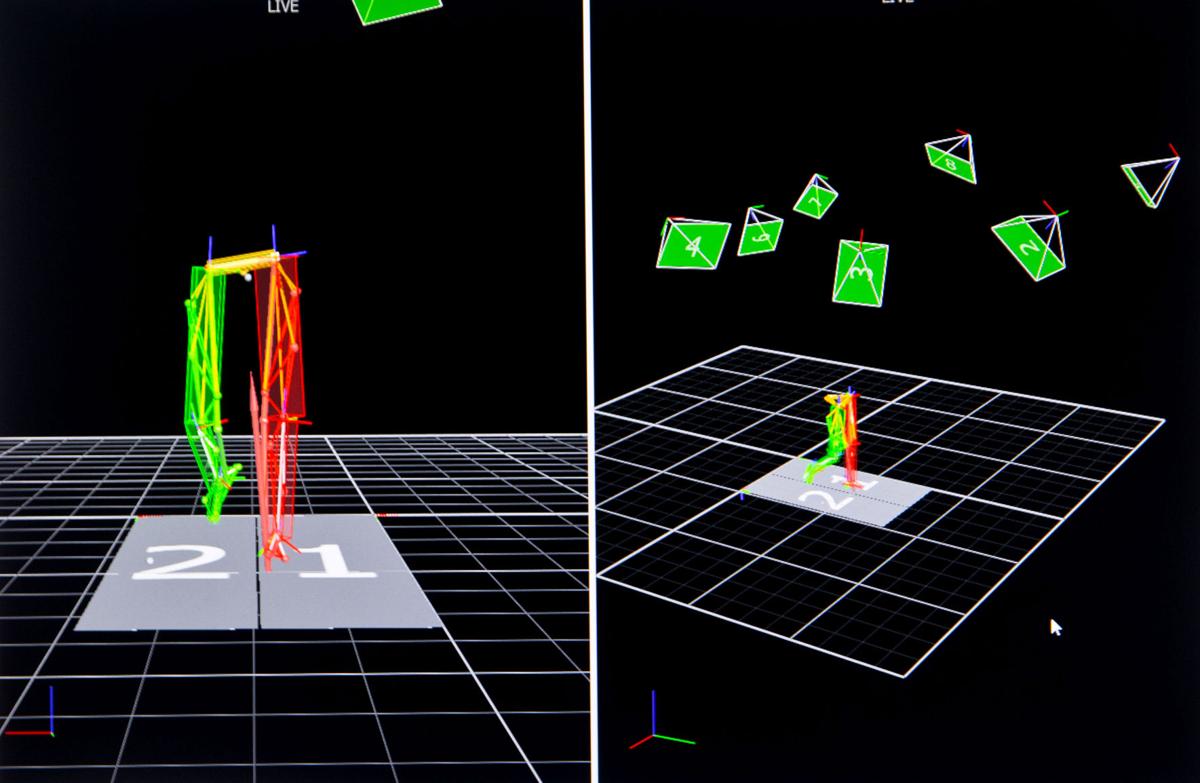 A computer screen showing the motion capture readout at in the virtual reality laboratory. 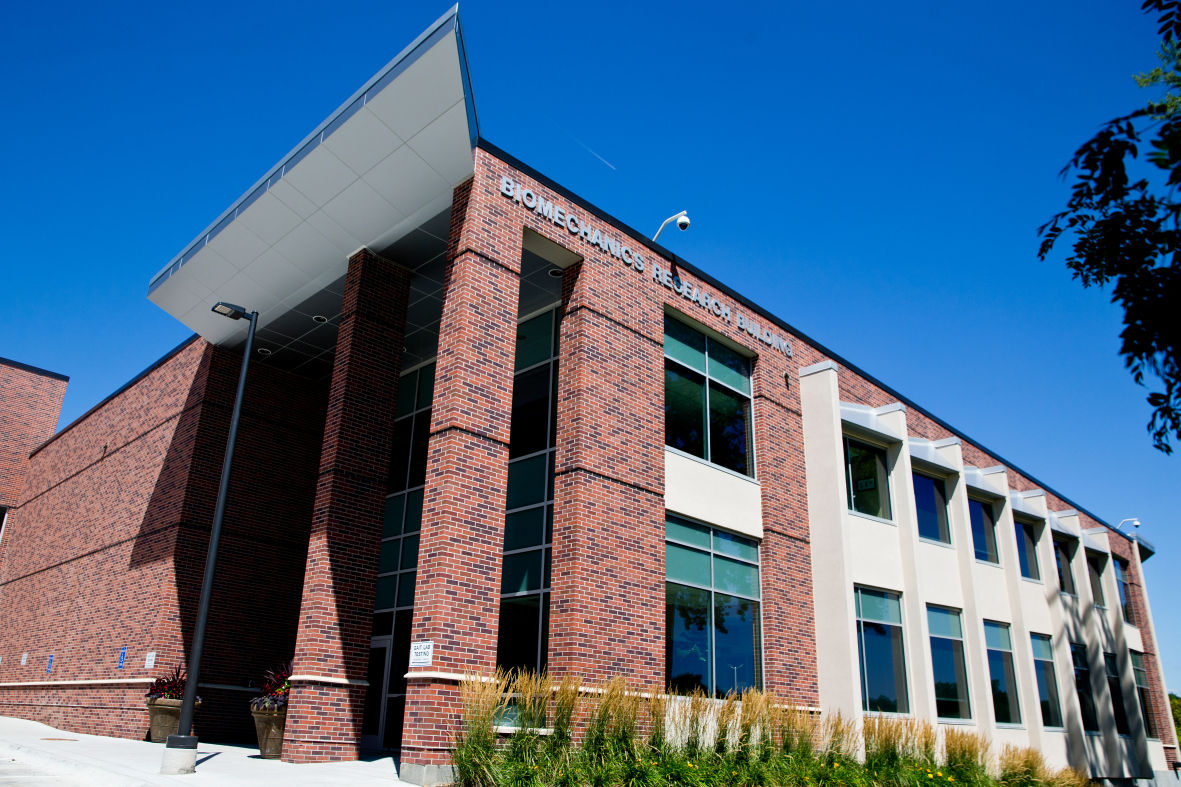 Jessica Fujan-Hansen demonstrates the virtual reality laboratory at UNO’s Nebraska Biomechanics Core Facility. The building, the only one of its kind in the world dedicated to biomechanics research, was a major reason the center just received a $10.1 million grant from the National Institutes of Health to study movement’s relation to disease.

Dr. Jenna Yentes talks with Dave Frenzer on Tuesday before a test at the biomechanics research center that measures breathing and walking at the same time.

Cameras that track eye movement to see what images the subject in the test watches on a screen.

Jessica Fujan-Hansen demonstrates the virtual reality laboratory by walking on a treadmill in front of images projected on screens.

A computer screen showing the motion capture readout at in the virtual reality laboratory.

University of Nebraska at Omaha professor Nicholas Stergiou remembers when he asked a fellow researcher about landing big dollar research grants and was quickly dismissed.

The researcher told Stergiou that he didn’t need to worry about those kinds of grants, the multimillion-dollar ones. Those, he said, are for the “big boys.”

This month, Stergiou’s team at the Nebraska Biomechanics Research Building won a $10.1 million grant from the National Institutes of Health to establish the Center for Research in Human Movement Variability at UNO. It’s the largest research grant UNO has ever received, more than doubling its previous record of $4.9 million.

Practically speaking, the grant means a huge infusion in funding. It means UNO will be hiring new professors and launching new research projects in the biomechanics program, which applies the laws of mechanics and physics to human movement, inside a new $6 million, 23,000-square-foot building. More broadly, it signals to UNO that it is closer to the ranks of institutions considered “big boys.”

“Now, we are in the same league with other research institutions of this state,” said Stergiou, director of the Nebraska Biomechanics Core Facility.

“Everyone can look UNO in the eye now, in my opinion.”

In the University of Nebraska system, grants of this scope are more common at the NU Medical Center and the Lincoln campus; where the largest single grants recorded are $17.2 million and $24.8 million respectively, according to university officials.

While those two campuses have long been known for their research, UNO was just categorized as a doctoral/research university by the Carnegie Foundation seven years ago.

Chancellor John Christensen described the grant as “one of the biggest things that’s happened on this campus in my memory.”

“It sends a message about the quality of work that takes place on this campus,” Christensen said.

Things look much different today than in 1996, when Stergiou joined the faculty and did his research in a gymnasiumlike space a little bigger than his new office. Last year, UNO built the new center, its first freestanding research facility and the only of its kind in the world dedicated to biomechanics.

He believes the new space, which was built with private donations and stocked with such technology as virtual reality software, moving floors and other tools to test gaits and movement, played a big part in securing the five-year Centers of Biomedical Research Excellence grant.

Researchers will look for clues in better diagnosis or treatment, Stergiou said. Doctors from UNMC will be heavily involved to ensure that the research is easily translated to better serving patients in a clinical setting, he said.

Anastasia Kyvelidou, a researcher who will be hired as a tenure-track professor through the grant, will study movement as it relates to autism. Among her goals: identifying movement cues that could help spot autism earlier.

Sara Myers, an assistant professor whose research focuses on peripheral arterial disease, said the grant is validation of everything she and her colleagues have been working on for the past few years.

“We are doing things at UNO that people said would never happen,” she said.

The grant can be renewed for up to 15 years, and could mean more than $30 million in funding over that time frame. That’s in addition to millions the researchers were already bringing in individually through other work.

By the end of this five-year term, Stergiou said, several junior researchers will become senior researchers. If all goes according to plan, they will have contributed to better diagnoses and treatment for the disorders they are studying. And Stergiou hopes when students around the world want to study biomechanics, UNO will be the clear number one choice.

“This grant can put us there,” he said. “We can be the most established program in the world in biomechanics.”

Location: University of Nebraska at Omaha, on the Dodge Street campus

Mission: Research human movement and how movements connect to diseases or disorders, to develop better treatment responses and earlier diagnosis for conditions including autism and stroke.