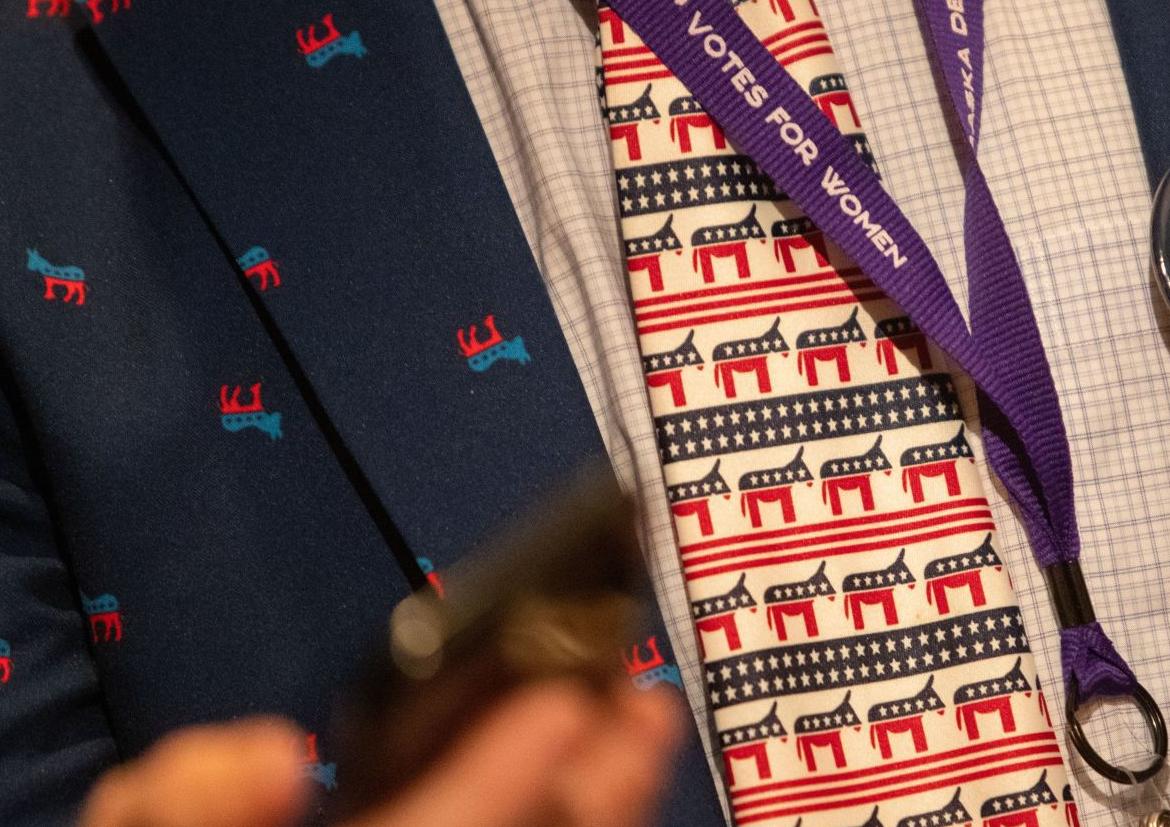 A member of the Democratic Party wears a suit adorned with donkeys at the Morrison Exon Dinner, an annual fundraiser,  held at the Hilton Omaha in downtown on Oct. 26, 2019. 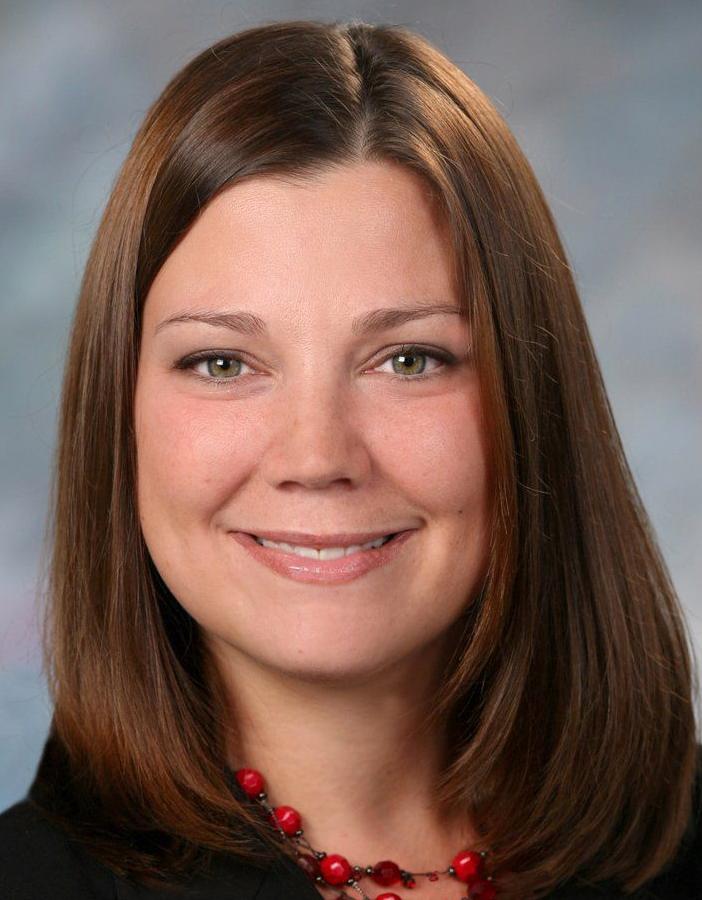 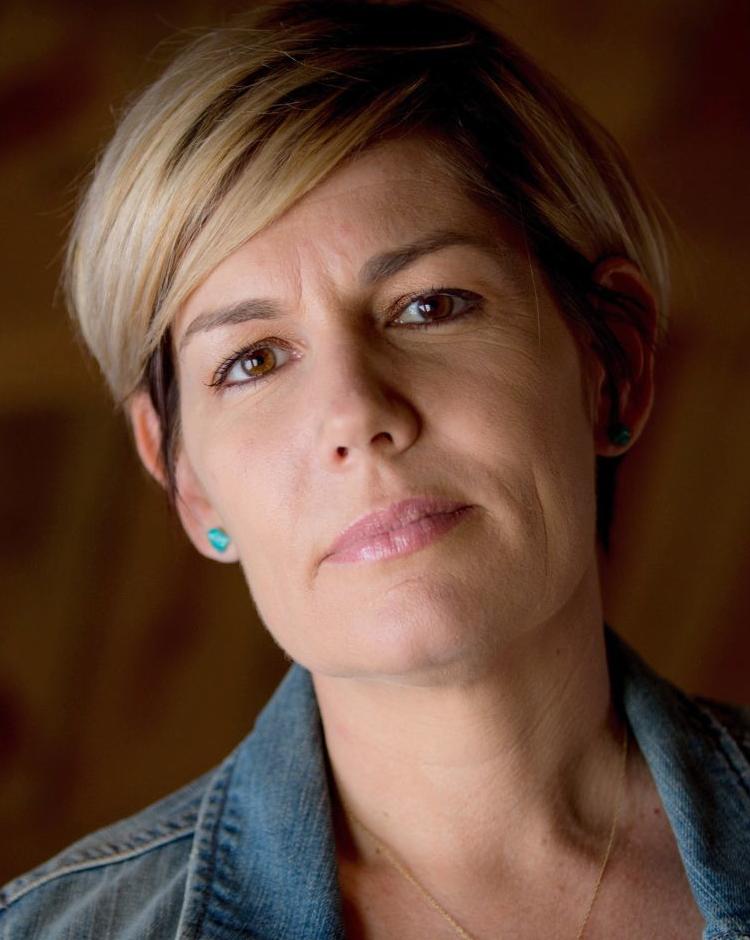 In the Saturday post, Kleeb wrote that she had been “notified that Crystal Rhoades is reaching out to Bold donors, and telling them not to donate to us because of me.”

Kleeb founded Bold Nebraska, a group that helped organize opposition to the Keystone XL oil pipeline. She did not specify which donors had been contacted by Rhoades.

“She went on a ‘rant’ (to use the donor’s language) about what an awful person I am,” Kleeb posted. “I’ve stayed quiet the last two years about her attacks, mean actions and behavior that is undeserving of response — but— when you go after Bold ... you crossed the line and I won’t be silent.”

Rhoades and Kleeb are two of Nebraska’s top Democrats.

Rhoades said in a phone interview Saturday evening that she hadn’t seen the post but that a number of people told her about it.

“I’m doing what candidates are supposed to do — I’m reaching out to people who I think would be interested in supporting me,” Rhoades said. “That’s what every candidate does.”

Rhoades is running for reelection to the Nebraska Public Service Commission in 2020 and has said she is seriously considering seeking another term as Douglas County party chairwoman.

Rhoades said she thinks the situation is “very personal” for Kleeb, “and it’s unfortunate that she’s letting her personal beliefs into this.”

The two have publicly clashed before over access to party resources, specifically during the 2018 election.

Kara Eastman won the Democratic primary in the 2nd Congressional District over Brad Ashford, a former congressman and state senator. Eastman relied heavily on the Douglas County Democratic Party, instead of the state party.

The Eastman camp had regarded the Nebraska Democratic Party with distrust since the primary, when the state party brought in two national speakers for its annual fundraiser. Those speakers, Rep. Debbie Dingell of Michigan and South Bend, Indiana, Mayor Pete Buttigieg, also held a private fundraiser for Ashford. And Dingell voiced support for Ashford at the party event.At the time Kleeb said she was remaining neutral and the state party was supporting both candidates.

Rhoades accused Kleeb of “sabotaging” Eastman, who ran on issues such as “Medicare for all,” debt-free college and raising the minimum wage.

Kleeb described it as a difference in philosophies. Both said they were unsure if they’d be able to work together in the future.

Kleeb said the conflict has been going on for two years.

“I now feel guilt as a leader for tolerating it,” Kleeb said in a phone interview. “For the good of the party ... I’m not going to tolerate it anymore. It’s time to stand up to bullies, both in the White House and here.”

Kleeb said Saturday that she believes Spencer Danner, who recently announced his run for Douglas County chairman, will “bring the party back together.” That election will be held sometime in May among Democrats in Douglas County.

The next election for Nebraska governor is three years away, but already some potential candidates are dipping their toes in the political waters.

While I think Jane is trying pretty hard and seems like she works a lot, Kleeb lives in Hastings and is not the right person to lead the Democrats in Douglas County.

Rhodes made the right call in backing Eastman. Ashford is the same guy as Bacon. We need an alternative.

Also I note Brad Ashford went to Omaha City Council and told them to build the downtown Omaha jail; a very unpopular opinion except for people like Mike Yanney, who gave Brad's wife Ann thousands of dollars for her current campaign.

I say out with the old guard like Brad and Omaha big business and elect a talented person like Kara.

If it's a choice between Rhodes and Kleeb and that means Ashford over Eastman, then I say go Crystal Rhodes.

So Jane stop feuding and stick to being buddy buddies with guys like Ron Kaminski and Vince Powers, who want to build that pipeline that brought you to the public's eye in the first place.

PS I am an Independent and not registered as a Democrat. Because of people like Kaminski and Marc Kraft and Chris Rodgers and Chris Jerram and Ben Gray who only do what Omaha big business tells them to do.