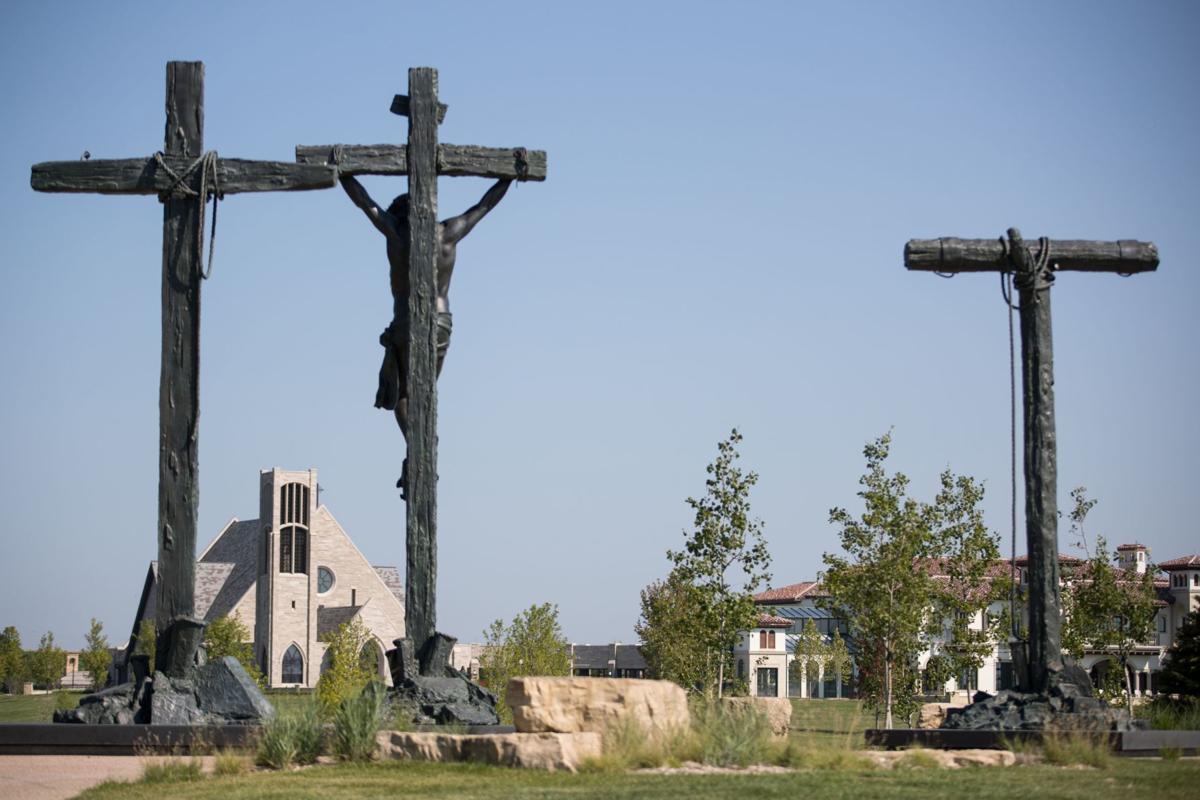 Joe Ricketts said last year that other products to benefit his multimillion-dollar retreat in Sarpy County were in the works. 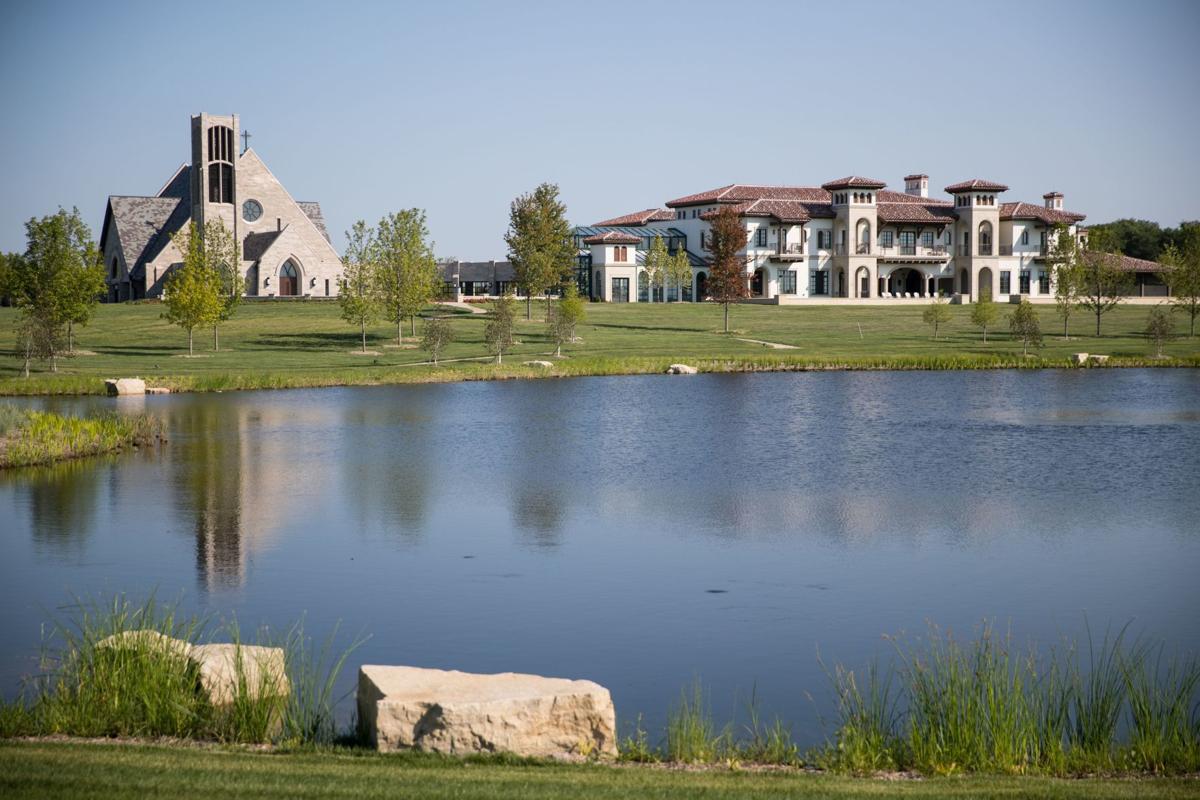 The Cloisters on the Platte, which sits on more than 900 acres south of Gretna, hosted its first retreat on July 19. 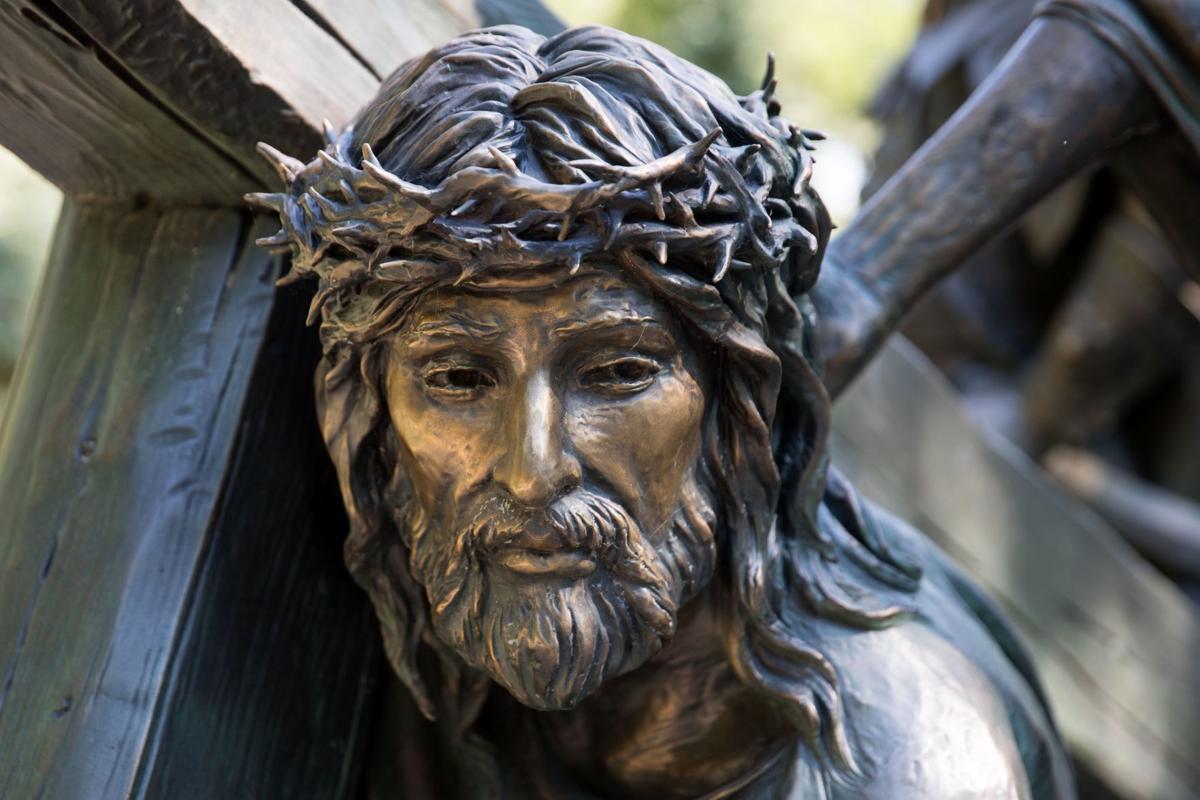 The sixth Station of the Cross at the Cloisters on the Platte. Ten sculptors from across the country contributed to the retreat’s Stations of the Cross. 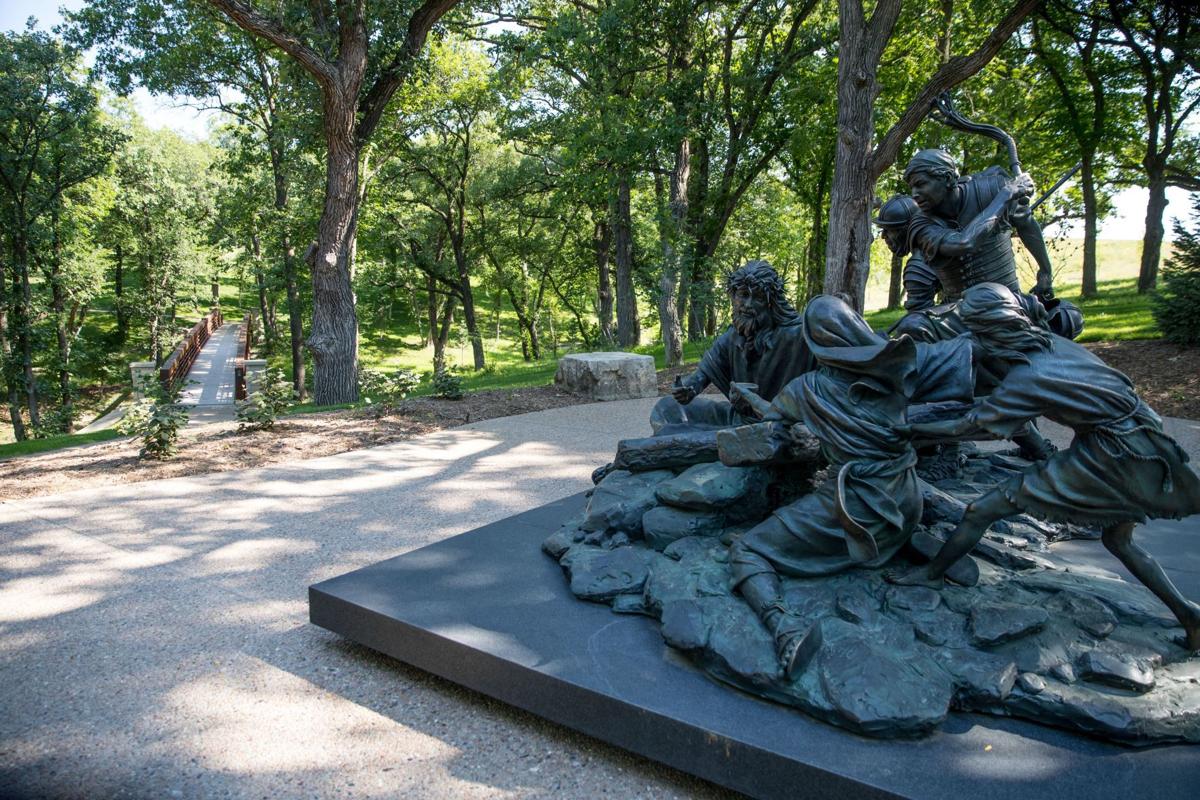 At the seventh Station of the Cross at the Cloisters on the Platte, Jesus falls for the second time. Joe Ricketts said the Stations of the Cross at his retreat are the most "dramatic and dynamic" in the world. 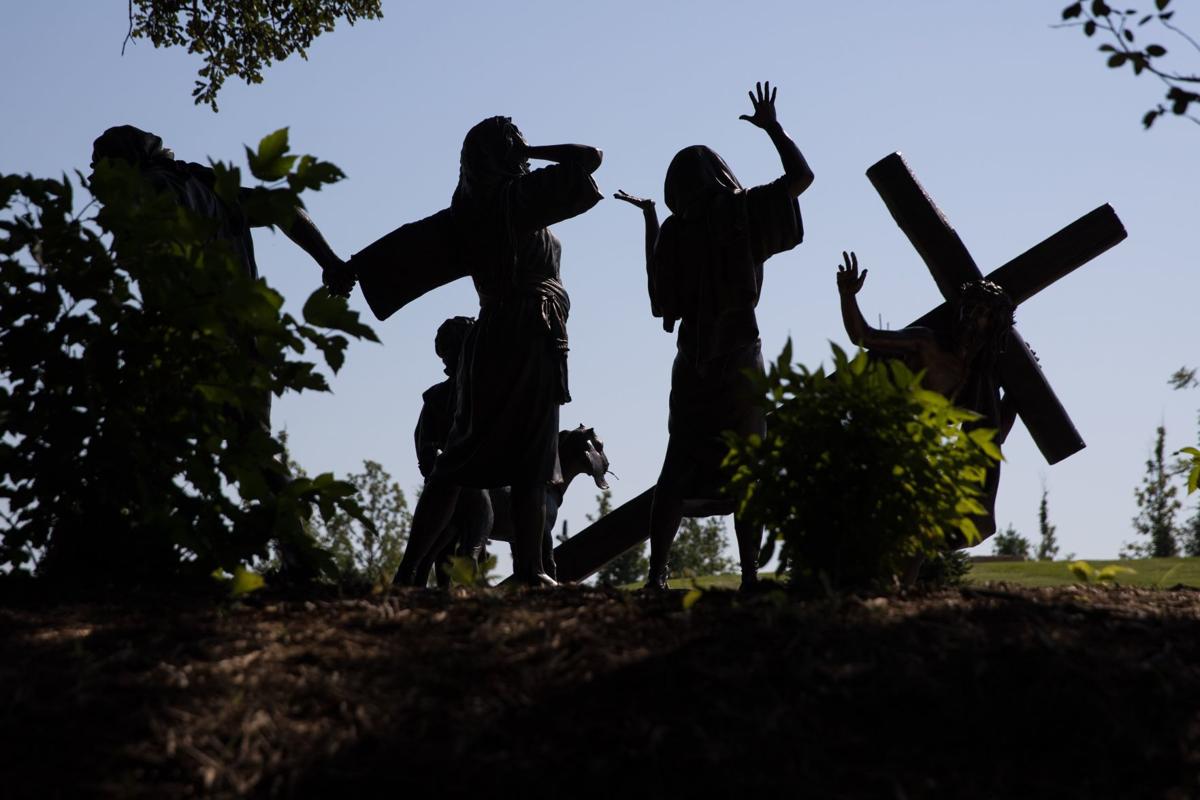 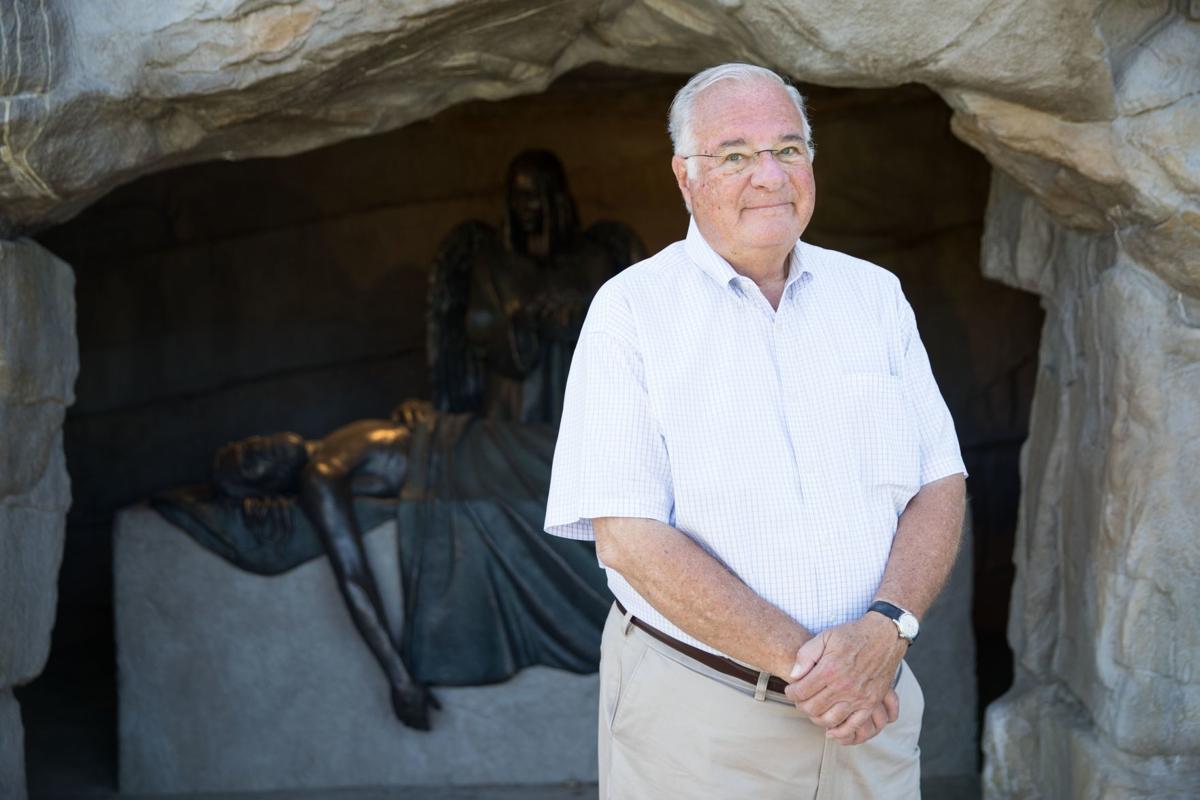 Joe Ricketts at the 14th Station of the Cross, which shows Jesus in the tomb, at the religious retreat he built. Ricketts won't say how much the retreat cost to build, but building permits show that it was at least $20 million. 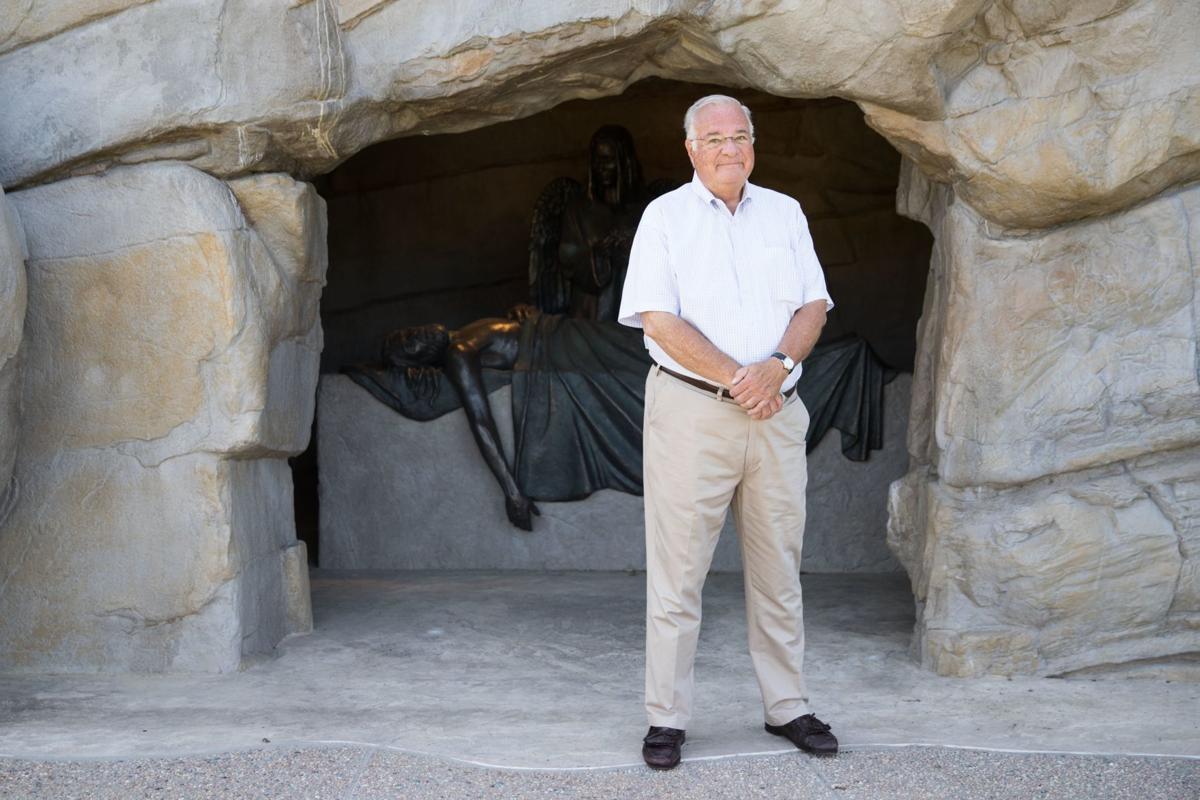 Joe Ricketts and one of the stations of the cross at his retreat near Gretna.

Joe Ricketts said last year that other products to benefit his multimillion-dollar retreat in Sarpy County were in the works.

The Cloisters on the Platte, which sits on more than 900 acres south of Gretna, hosted its first retreat on July 19.

The sixth Station of the Cross at the Cloisters on the Platte. Ten sculptors from across the country contributed to the retreat’s Stations of the Cross.

At the seventh Station of the Cross at the Cloisters on the Platte, Jesus falls for the second time. Joe Ricketts said the Stations of the Cross at his retreat are the most "dramatic and dynamic" in the world.

Joe Ricketts and one of the stations of the cross at his retreat near Gretna.

Through a large gate, past a gatehouse and up a winding road, Joe Ricketts’ multimillion-dollar religious retreat center near the Platte River is finished and awaits its first guests Thursday.

“I’m really quite pleased,” Ricketts said of his finished product, which sits on more than 900 acres near Nebraska Highway 31 and Fishery Road south of Gretna.

The completed Cloisters on the Platte, Ricketts’ passion project 20 years in the making, is luxurious. Guests will park in an underground parking garage designed to look like a cliff face. They’ll take shuttles up the hill to the main retreat campus, featuring lakes, forest and sprawling, well-manicured lawns.

A chapel modeled after St. Margaret Mary Catholic Church in Omaha and a massive main building sit beside a small lake. Visible in the distance are seven guest lodges, each designed by a different architect. And across the lake, scattered throughout a 2,500-foot trail that winds through the trees and up and down hills, are life-size sculptures marking the 14 Stations of the Cross.

Aesthetically, the campus is akin to a country club mixed with a lake resort, though its purpose is purely spiritual, said Ricketts, the billionaire founder of TD Ameritrade and father of Nebraska Gov. Pete Ricketts.

The silent, weekend retreats — to be held here 47 weekends a year — are geared toward Catholics but open to anyone of any faith. They’re free of charge, though retreat attendees are encouraged to make a donation.

Ricketts won’t say how much the endeavor cost him, but building permits filed with Sarpy County show that it cost at least $20 million. The property cost Ricketts an additional $13.6 million to purchase in 2014.

Ricketts commissioned 10 sculptors from across the country for the project and called his Stations of the Cross the most “dramatic and dynamic” in the world. They’ll be open to the public Mondays through Thursdays beginning July 23. Entrance involves a suggested donation of $10.

Indeed, they’ve already drawn international interest — Ricketts said he’s heard from people all over the world, including Singapore, Hong Kong and the United Kingdom, who want to travel to Nebraska to see the Stations of the Cross.

More than 7,000 people have indicated interest in attending a retreat, he said, but there’s only room for 4,000 people per year. That means a fairly lengthy waiting list.

Ricketts has called The Cloisters on the Platte a “gift to the community” but one that requires buy-in from community members to maintain. His financing plan for the center’s operations involve product sales — at the moment, bread.

Ricketts said Wednesday that he’s bringing more products to area stores in the coming weeks. He has 10 to 15 grocery store products in the works. And he declined to say how much the bread has made so far.

The sculptors who made the Stations of the Cross also aim to sell their products. They formed a company to sell copies of the sculptures they created for the retreat center.

Ricketts said the project was “really a lot of fun” to build. He plans to attend his first retreat in October.

“I tell my wife it’s my selfish weekend,” he said. “It’s a weekend where I can just think about the things that are important to me.”

Ricketts said he always knew he'd need to find a way to pay the ongoing expenses of running The Cloisters on the Platte, which is nearing completion off Nebraska Highway 31 and Fishery Road south of Gretna. The Ignatian retreat center is geared toward Catholics but open to people of all faiths.

Each Easter, the utter grotesque excess of Rickettsworld will be commemorated by members of the the Chicago Cubs compelled to re-enact the Crucifixion with the relief pitchers with the worst ERAs taking their places on the cross. How about setting up a recovery center for all the thousands victims of victims of sexual assault at the hands of priests in a "church" that is losing members so rapidly that in 20 years there won't be anyone left to carry the Pope around in his fancy chair.

That's a beautiful place for all the dedicated nuns who have retired after a lifetime of ministry and living lives of poverty to spend their last years.

Looks like a fancy retreat for millionaires...that just happens to be tax free. How convenient for the Rickets! Its a shame they didn't use all that money to help the poor or do anything worth a darn to help others. I can just picture Jesus using money for something like this...can't you? (insert sarcasm).

Right on. If there is a heaven, you can't buy your way in.

I think I saw zebra mussels in the big pond.

Who says big religion does not pay? Now they can contemplate their sins in a multi-million dollar icon and remember most importantly tax free.

A self made millionaire and the hyenas are out because? Are they jealous because they haven't done as well? It takes nothing but effort to start a non profit to help the less fortunate. Which one of the complainers on here will start one or let me tell them how to spend their money? Or are they more special than Mr. Ricketts? And a little research would indicate what else he supports with HIS money. Ricketts also engages in philanthropy through The Ricketts Art Foundation, Opportunity Education Foundation, The Cloisters on the Platte Foundation, The Ricketts Conservation Foundation, and Ending Spending, Inc

Jealousy combined with ignorance is so ugly and disgusting.

No, not jealous in any way shape or form, I could care less if he built a tent city. What I have a problem with is how people build something, designate it as tax exempt for religious reasons and will never pay a dime of taxes on it. The City of Omaha and the State of Nebraska have become the tax state while thousands of hard working people who cannot pay property tax increases have to sell and move. That and as we all know in this town, the Catholics take the cake for tax exemptions. So, it is not ignorance nor jealousy, it is disgust. As for his philanthropy, that is also something that touches a small portion of the population, apparently very small, never heard of them. Ugly and disgusting is being called a hyena and being accused of jealousy when that is not the case, so choose your words and who you stand up for wisely, he is a big boy and does not need you on this matter.

"the Catholics take the cake for tax exemptions". That's quite the bigoted statement. And by the way, it is your elected leaders who determine who gets tax exempt. And who are you to decide whether or not some one gives enough to what you want?

So I stand by my description. You've proven it true.

If if isn't jealousy, then it's a misguided degree of self righteousness. Otherwise you wouldn't feel the need to comment in the manner you did.

Is this tax free?

So much judgement. This man made the money. He did not inherit it. Cool your jets! He could have spent the 40 million on far less civic activity than this. Is he suffering this vitriol for this effort or for his and the Current Governor with the same last name's political activity?? Can we separate this for the sake of moving us back towards some sense of decency?