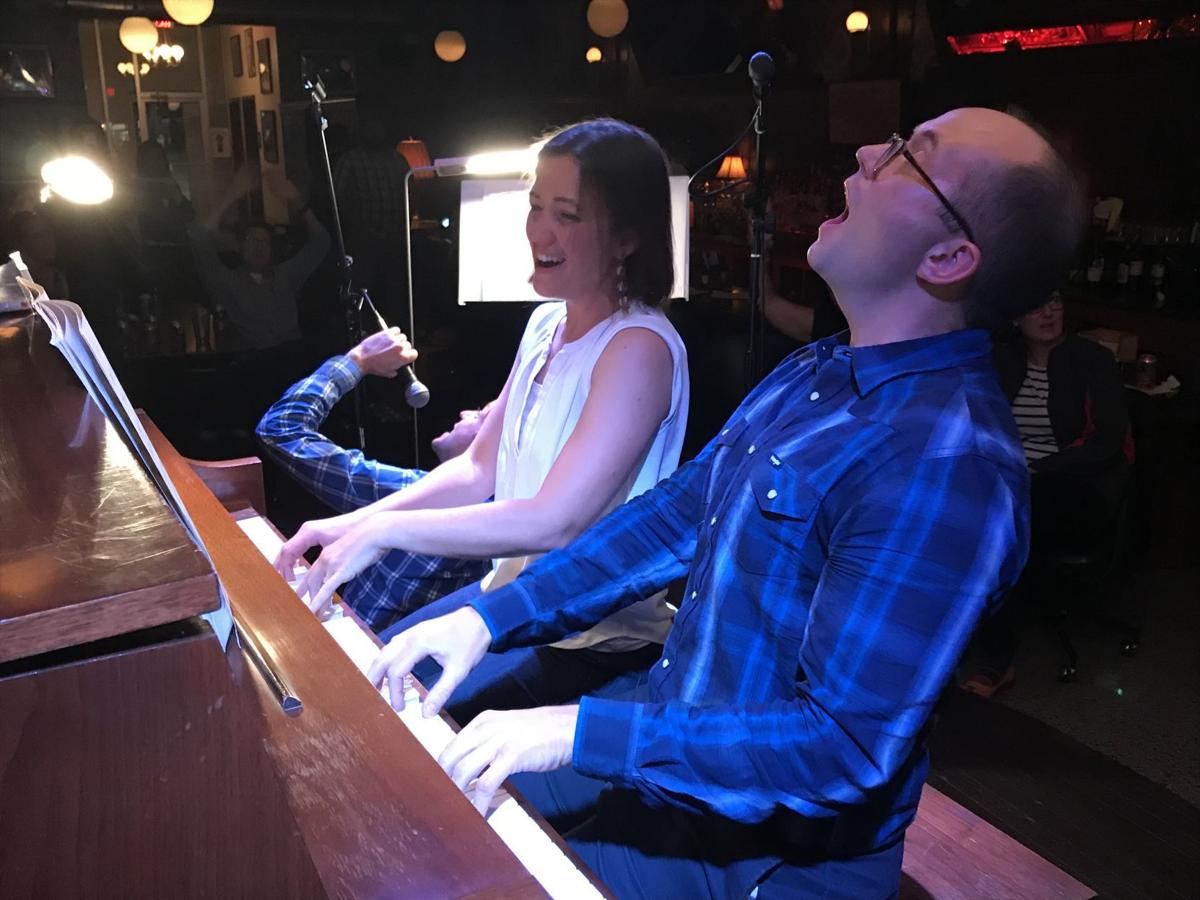 Julie Andrews in “The Sound of Music.”

Julie Andrews in “The Sound of Music.”

The world’s most famous nanny once had this to say about life’s dreaded tasks:

In every job that must be done, there is an element of fun. You find the fun and — snap! — the job’s a game.

A spoonful of sugar does help the medicine — a bed to be made, say, or a column to be written — go down.

This is why Omahan Beth Engel threw a Julie Andrews sing-along.

Beth is a 43-year-old mother of four school-age children. She works full time outside the home as a partner with Dundee Venture Capital. She plays piano during Mass at her church, St. Pius X. This chapter of her life — as youngest brother Kevin McCarthy astutely observed — is “a million times busy.”

When you’re a million times busy, you cut the corners that you can — most often the ones that are really good for you. Like playing piano at home for enjoyment. Like jamming with your musician brother, Dan McCarthy. Like holding a bar sing-along, which for you and me might require zero practice and liquid courage, but for the piano accompanist requires time to plan and prepare and practice.

But Beth decided to make time, this time, for something she loves.

“I very selfishly did not want summer to go away,” she explained before taking the stage at a Dundee bar, Pageturners. “This will be fun.”

Fun is subjective of course. One woman’s Julie Andrews sing-along is another woman’s Husker game. But without judgment toward those in red, I know which seat I would drop heaven and earth to warm. It’s a pleather one on wheels with a view of the corner stage, backlit by the Bucky’s service station across the street.

It’s a coveted spot during the only other time of year when Beth and Dan take the stage together at Pageturners. For the past five years, the two have hosted a Christmas Carol sing-along they called, “Caroloke.” The joint is usually packed. You wouldn’t believe how many Omahans want to sing “Santa Baby” and “O Holy Night.”

Dan, a singer-songwriter who leads local folk-rock band McCarthy Trenching and who has a standing ragtime playing gig at Pageturners, thought Christmas Caroloke had run its course. Beth, wanting a last hurrah with her brother and a way to treat herself, decided to throw a sing-along drawing from the familiar canon of two of Julie Andrews’ biggest hits: “Mary Poppins” (1964) and “The Sound of Music” (1965).

Beth and Dan are two of four McCarthy children for whom the piano lessons stuck. Brother Kevin, who quit, remembers Beth, who started playing at age 7, using piano as a way to get out of chores and Dan, who started at age 5, waking the house up in the morning with Hanon finger exercises.

Beth, who got a piano for Christmas in second grade and again in 11th grade and a third piano of her own at college graduation, is quick to say the McCarthy home was not like the famous bluegrass singing Carter family. She said that mother Nancy’s familiarity with piano involved dusting the keys and that dad Mike was not musical “at all.”

The children did not grow up singing around the old piano, though they did gather around the TV set to catch “The Sound of Music” when it was aired on network television once a year — a ritual completely lost in this click-and-watch age.

Beth is also quick to point out that the real musician in the family is Dan. It’s his full-time job. He sings, too, and he’s comfortable in front of a microphone, unlike Beth, who has been accompanying singers since seventh grade. She prefers a background role. She views her piano ability as a service she can offer to others. To church. To school, when she accompanied choirs at Marian High. To friends and family who love to sing.

“It’s a ministry of hospitality,” she said.

As much as she loves playing piano, Beth doesn’t do it as much as she’d like. She accompanies the children’s choir at Pius masses twice a month and tries to squirrel away time to run through the hymns at home. Do the children gather around and sing with her? Is it a scene out of a Julie Andrews movie?

No, she said. The kids do flock to the piano. To interrupt with questions like: Mom, where are my shoes?

Beth says the two best things her parents gave her were piano lessons and siblings. And in holding a public sing-along, she held herself to the discipline of practice. She and Dan would get together regularly over the summer to play Julie Andrews duets and sing together. They decided not to make a big deal about this event publicly. They told friends and family, did zero other promotion and decided to let the songs unfold naturally.

On a recent Thursday, my husband shuttled three children into his car for one daughter’s soccer practice — over the strenuous objections of the two who wanted to stay home — and said in a not-Captain von Trapp way: “Mommy’s going out.”

“Mommy’s working,” I lamely replied, and then raced to the upstairs computer to do a few practice runs using that trusty piano accompanist, YouTube.

At Pageturners, Dan warmed up a thin crowd with Scott Joplin. You could close your eyes and time-travel back a century or so. But then would-be singers filtered in. The three dozen or so people who showed up included an attorney (“Jolly Holiday”), a Farsi and French-speaking ex-linguist-turned-fundraiser (“Edelweiss”), a substitute teacher (“Supercalifragilisticexpialidocious”), an Athleta store manager, (“Do-Re-Mi,” “The Lonely Goatherd”) and maybe a newspaper columnist whose inner desire after death is to be reborn as Julie Andrews. (“How Do You Solve a Problem Like Maria”).

My wingwoman, a childhood friend who works as a civil engineer and was not going to stretch her vocal chords, scientifically observed that everyone who got onstage was having fun. Showing joy. Living for a few minutes with pure Mary Poppins-Maria-non-Trapp abandon.

“It’s a stress-reliever,” said Cris Otepka, who sings in local weddings and funerals and has a chorus role in Opera Omaha’s upcoming “Pagliacci.”

It’s fair to say that Cris, who steals the show every Christmas Caroloke, was among the night’s biggest singing talents. But the others were regular folk, people like 48-year-old nurse and mother Meg Filipi, who likes to sing at the top of her lungs to the satellite radio in her Honda minivan.

“There’s something that singing does to the heart,” said Meg, who sang “My Favorite Things” and “So Long, Farewell” on Aug. 23. “I just love to do it. I feel like I’m in a different place.”

And you don’t need Julie Andrews to get to that place. Just a song. Which makes any medicine go down in the most delightful way.

Nebraska Nice in action: More than 5 dozen stories of everyday folks helping each other

Every day, people around Omaha lend a hand to help their neighbor or complete strangers. Take a look at a few examples of Nebraska Nice in action.

Rich Livengood soon will be formally recognized as dying in the line of duty.

Are they doing this again? My wife would eat this up!

Thank you for these uplifting stories!!!