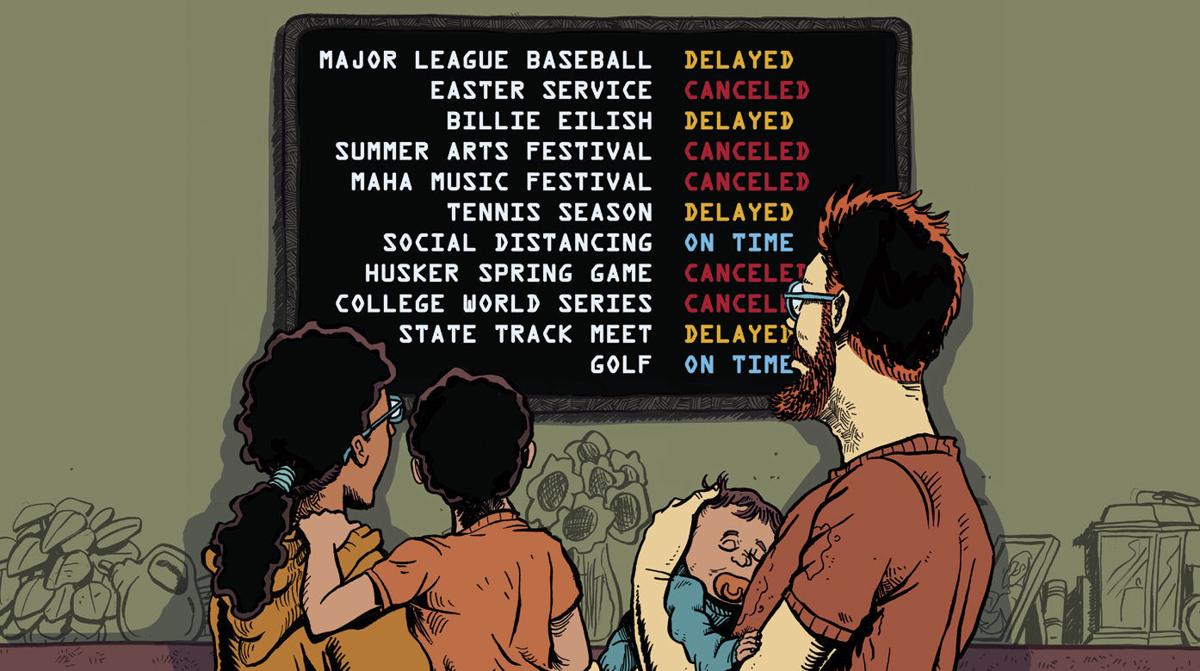 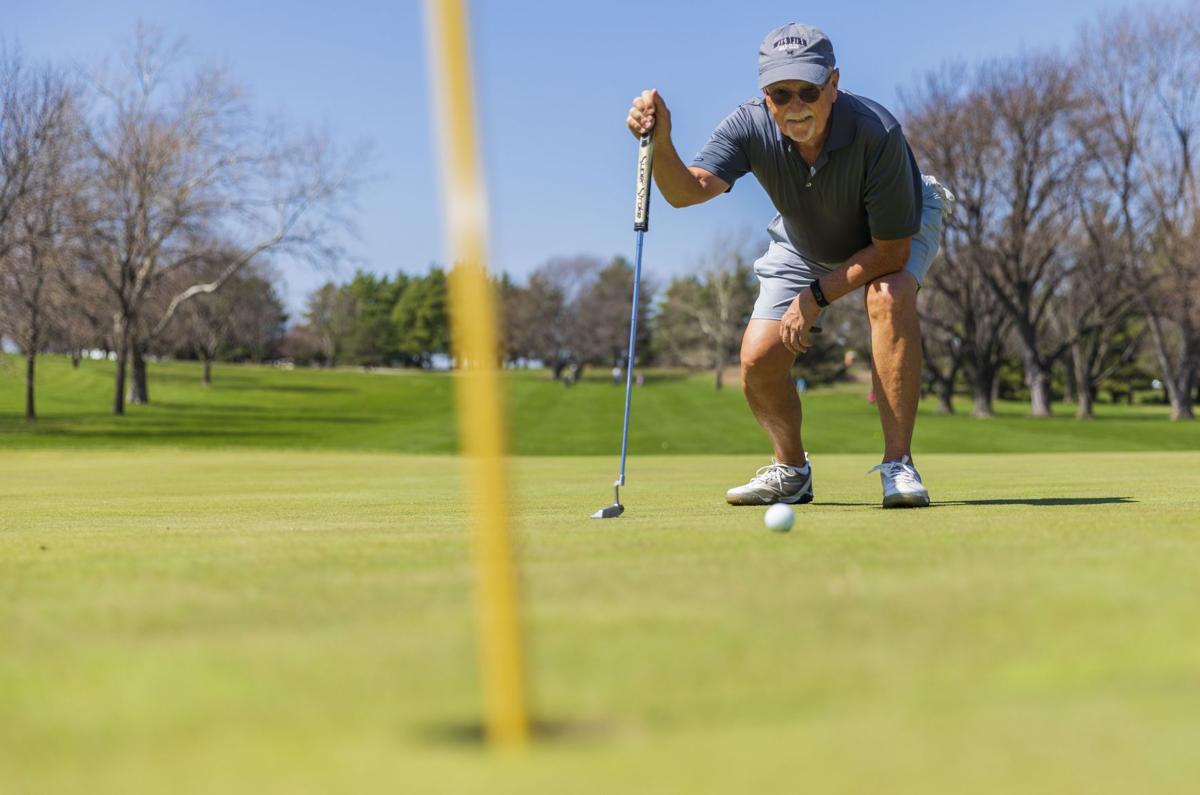 Doug Fenton sizes up a putt during a round of golf at the Holmes Golf Course in Lincoln. Golf is one spring activity that has not yet been canceled. “The walking and the golf have kept what little sanity I have left going,” Fenton said. 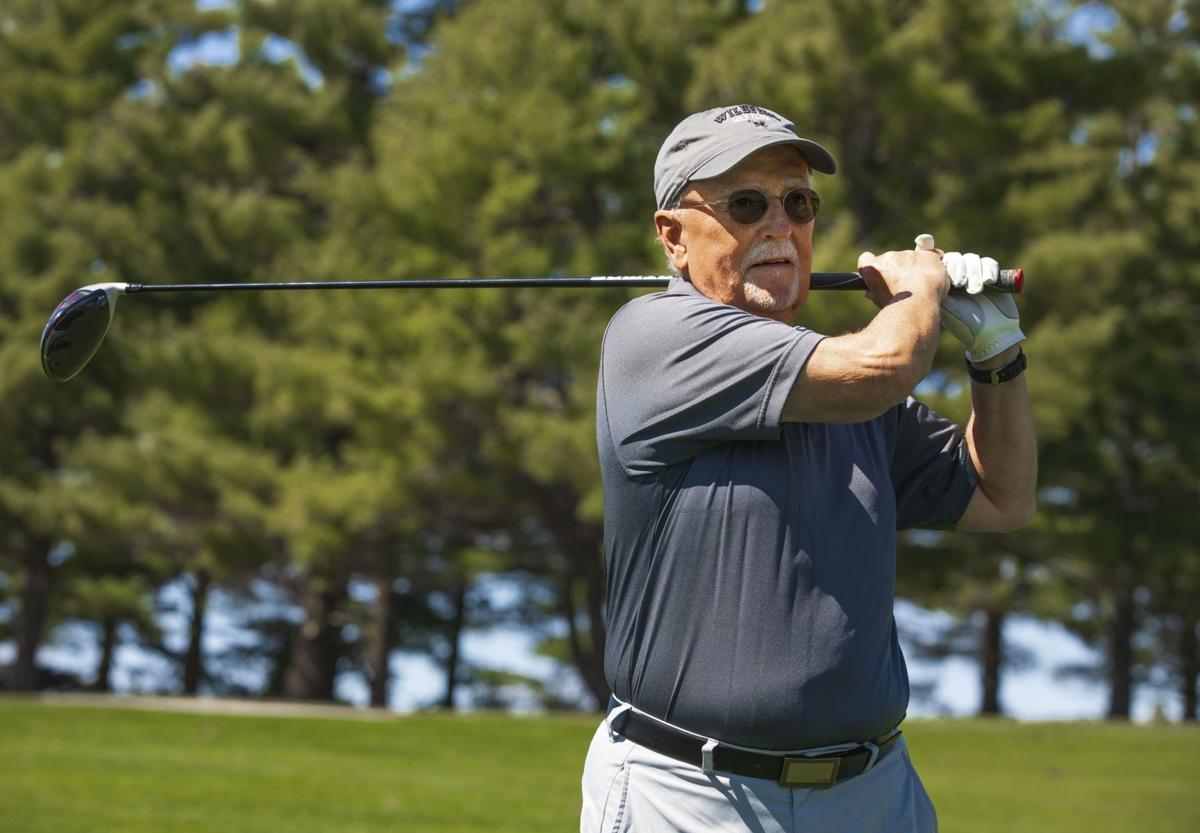 Doug Fenton plays a round of golf with longtime pals in Lincoln on Tuesday. He said keeping golf courses open is the "right thing." 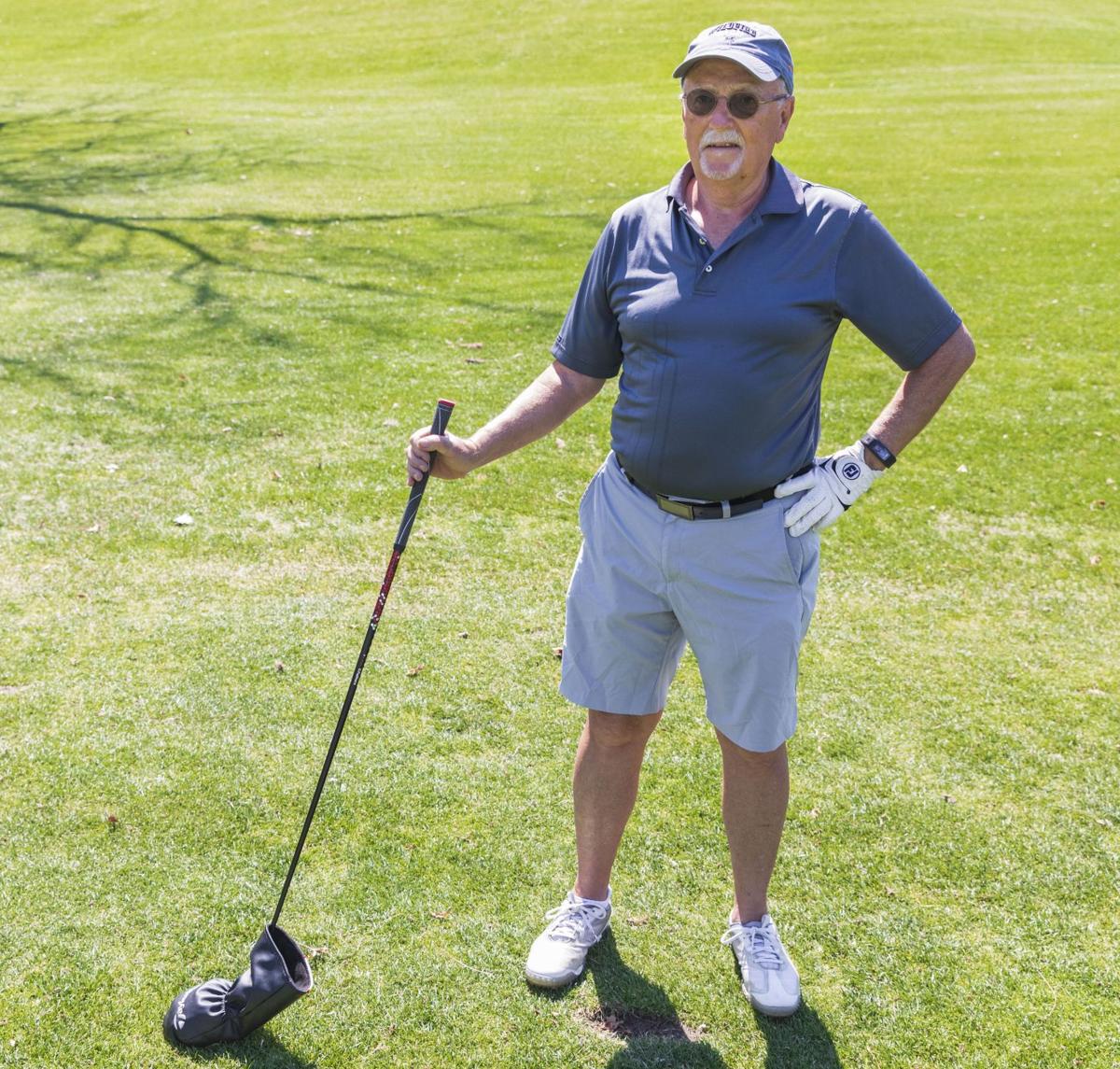 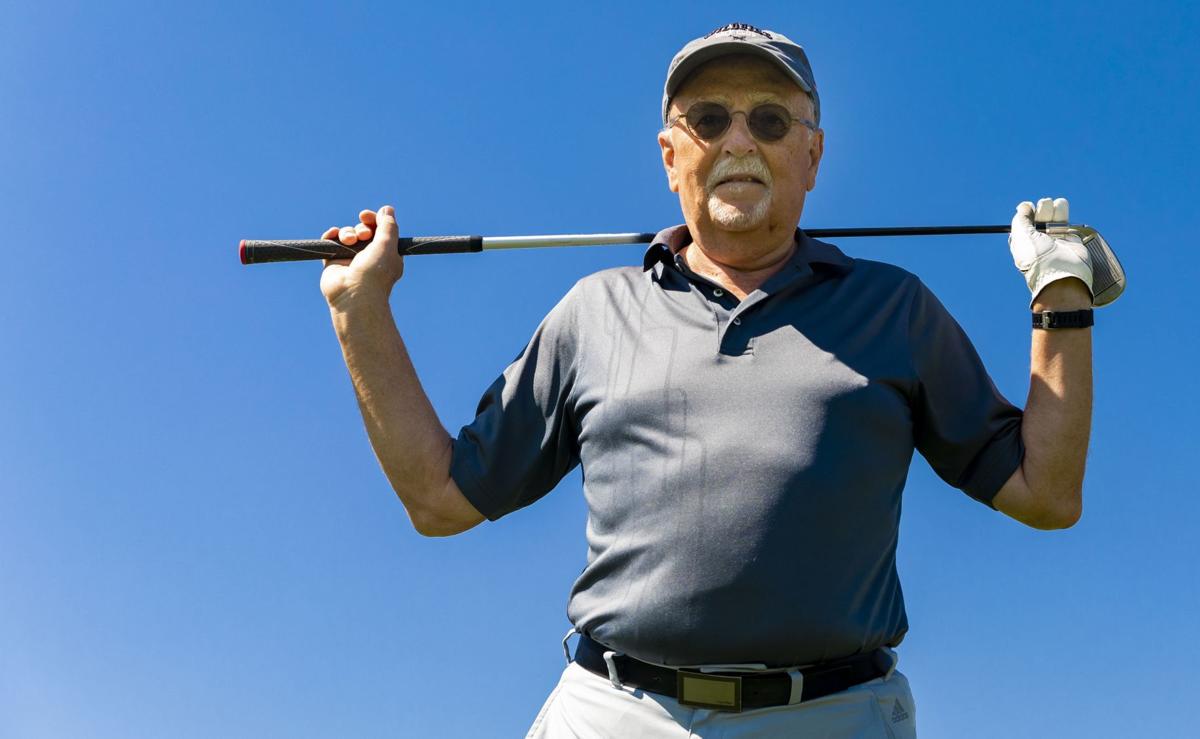 Doug Fenton relaxes during a round of golf Tuesday. 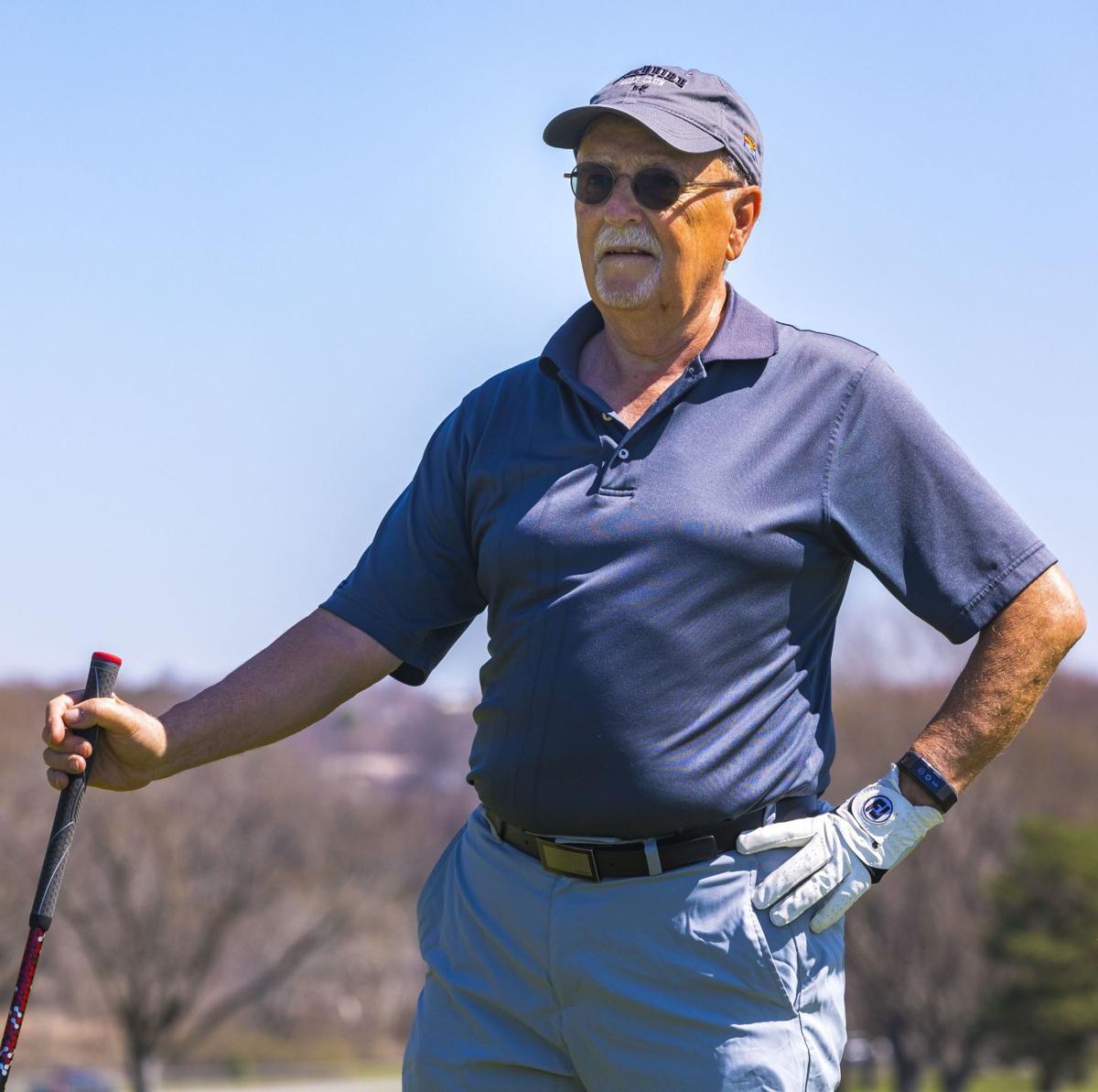 Doug Fenton waits his turn during a game at Holmes Golf Course in Lincoln.

Doug Fenton plays a round of golf with longtime pals in Lincoln on Tuesday. He said keeping golf courses open is the "right thing."

Doug Fenton relaxes during a round of golf Tuesday.

Doug Fenton waits his turn during a game at Holmes Golf Course in Lincoln.

The cloudless sky, lush grass and happy faces Tuesday afternoon at Elmwood Golf Course seemed from another world, far removed from the confines of home and concern over coronavirus.

The “thwack!” of club striking ball resounded. The purr of golf carts and the quiet chatter of golfers gave no indication of the oddity of this period.

Coronavirus for now has shut down many of the traditions and events of spring, large and small, local and national.

The threat of the virus has led to cancellations, postponements or uncertainty over many spring and summer traditions, including Easter church services and the Summer Arts Festival, the Boston Marathon and state track meet, Major League Baseball and T-ball, the tax deadline and 10K road races.

Also, picnic parties and graduation ceremonies, the Husker spring game and the College World Series, proms and yearbooks, the Maha Music Festival and Taste of Omaha, slow-pitch softball and the Kentucky Derby, spring crushes and last day of school goodbyes.

This is insignificant compared to the sickness and death caused by the virus, but the absence of some events is a letdown nevertheless.

One activity, however, has avoided shutdown through this period: golf. Evidently nothing can prevent golfers from playing their appointed rounds.

We strive to bring you the news you want to read and the stories you need to hear about. At this time, we are watching the spread of COVID-19 …

Christine Rix chipped the ball over a pond and some Canada geese, placing it in the rough on the other side. Rix, 65, played Tuesday afternoon at Elmwood with three other women, all four of whom knew how to handle the sticks through decades of playing.

Rix stepped toward a man on the golf trail, then stepped back to maintain the prescribed 6-foot distance. “It’s mental,” Rix said of getting to play on a calm, 85-degree day. “It’s therapeutic.”

She expressed her appreciation that the city has kept the courses open.

“The walking and the golf have kept what little sanity I have left going,” said Fenton, 74. “I think they’re doing the right thing here, if we just keep our senses.”

Most courses have adopted new protocols recommended by the association to help prevent spread of the virus.

Those include staying 6 feet from one another; sanitizing carts after each round; increasing the duration between tee times; removing the flagstick completely or filling the cup so a player won’t touch the flag as he reaches for his ball; removing rakes from sand traps; and allowing only one golfer to a cart.

Omahan John Murphy, 65, said he recently played at Tregaron, a public course in Bellevue, and the club ran low on carts. Some people, including Murphy, doubled up in the carts.

“It’s swamped,” Murphy said of the club on pleasant days. “I rode (the cart) with somebody I knew.”

Doug Bengston, who runs Tregaron, said he called the Sarpy/Cass Health Department and asked for direction on whether two could ride in a golf cart.

Bengston said the staffer “had no issue with the fact that we had two riders on a cart. … If I would’ve gotten another answer, I would have gone with it.” Bengston said he has multiple sclerosis and a compromised immune system, and he wants the facility and equipment to be sanitary as much as anyone.

The department sent updated guidance to golf courses Wednesday and “recommended” one golfer per cart. Bengston said Thursday that it isn’t a mandate and he leaves the decision to the golfers. “If they request their own cart, they will be given their own.”

Sarah Schram, director of the Sarpy/Cass Health Department, said the office’s records show that Tregaron called March 30. A staffer might have indicated that two per cart would be OK, she said. But on March 31, she said, the department issued new regulations asking that people maintain 6 feet between them.

Riding in a golf cart with someone “doesn’t do very good for 6 feet of social distancing,” Schram said Tuesday. She said it would be OK to ride two to a cart if the twosome is from the same household, because they have largely traveled a similar path.

“In a perfect world, it would be a single person in a cart, right?” she said. As for riding with a friend or an acquaintance, she said: “You can’t look at me and know what your exposure history would be.”

The City of Omaha said Wednesday that people would no longer be allowed in city parks and could be ticketed but that golf courses could continue to operate. Omaha Police Chief Todd Schmaderer said at a press conference that golf courses are well-managed and that people sign up for tee times and are spread out on a course.

The matter of two to a cart again drew mixed messages. Schmaderer said he couldn’t envision ticketing someone for riding two to a golf cart. You need to use discretion, he said. After all, perhaps it’s a married couple riding in a cart together, he said.

But Parks Director Brook Bench then said it didn’t matter who they were, wife-husband or father-son, it’s one per cart on city courses. If people disobey that, Bench said, “they will no longer be golfing that day.” And golf course staffers know this, he said. “There’s nobody getting in a cart together.”

Dr. Rudolf Kotula, an infectious disease physician with Methodist Health System, said he played golf this week. “It’s safe to golf if you keep your social distance,” Kotula said. He said one person should ride a cart, not two.

Bench said the delight people are taking in golf this spring is evident from the turnout on courses. The city’s 18-hole and nine-hole courses are doing well, especially on pleasant days.

“I’m happy that people are able to golf,” he said early this week. “Our goal is to try and keep them open.”

At Elmwood Golf Course, the smell of freshly mown grass was in the air. From one spot on the south edge of the course, 11 carts could be seen.

“It feels great,” said Tom Mueller, 66, who golfed with Joe Harwood and Dave Wolf, both 67. They said in the clubhouse it would be one to a cart, the men said.

Wolf said he respected the threat of the virus. “It’s for real. There’s no doubt about it,” he said. “It’s just nice to be out.”

Tim Kutsch, 32, and Brett Klug, 33, looked joyful as the sun lit the rich greenery. Klug said it was his first time out this year, and he basked in the moment.

I'm very surprised that two people from different households in the same cart is allowed. This is reckless.

What's reckless is people telling everyone else what they should or should bei doing. Two people in a cart is no more reckless than going to a grocery store. Geez Tom, quit trying to tell everyone else how to live their life.