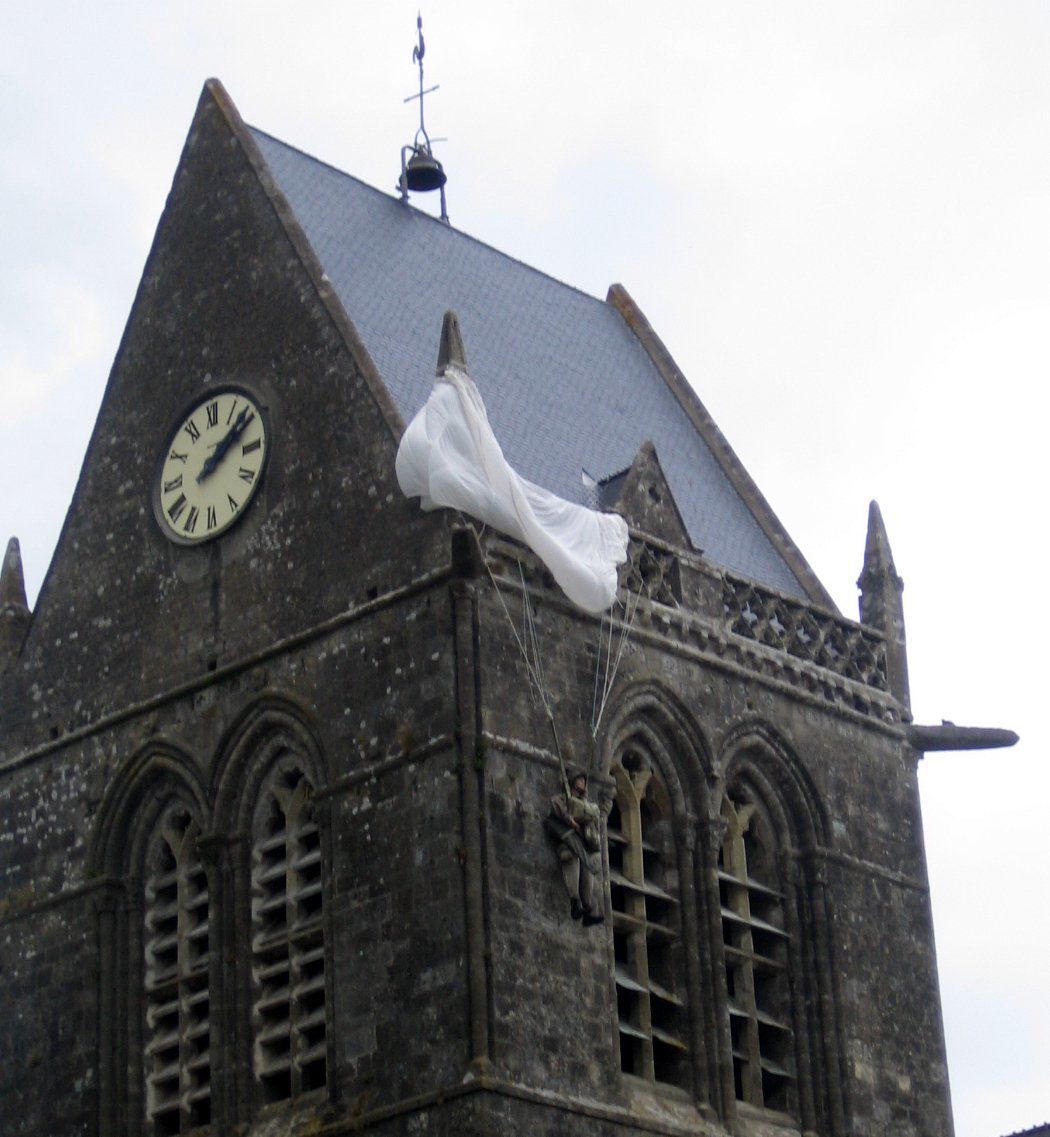 Pvt. John Steele's effigy still hangs from the steeple of the church in Sainte-Mère-Église, France, the first town liberated by Allied forces after the D-Day invasion on June 6, 1944. 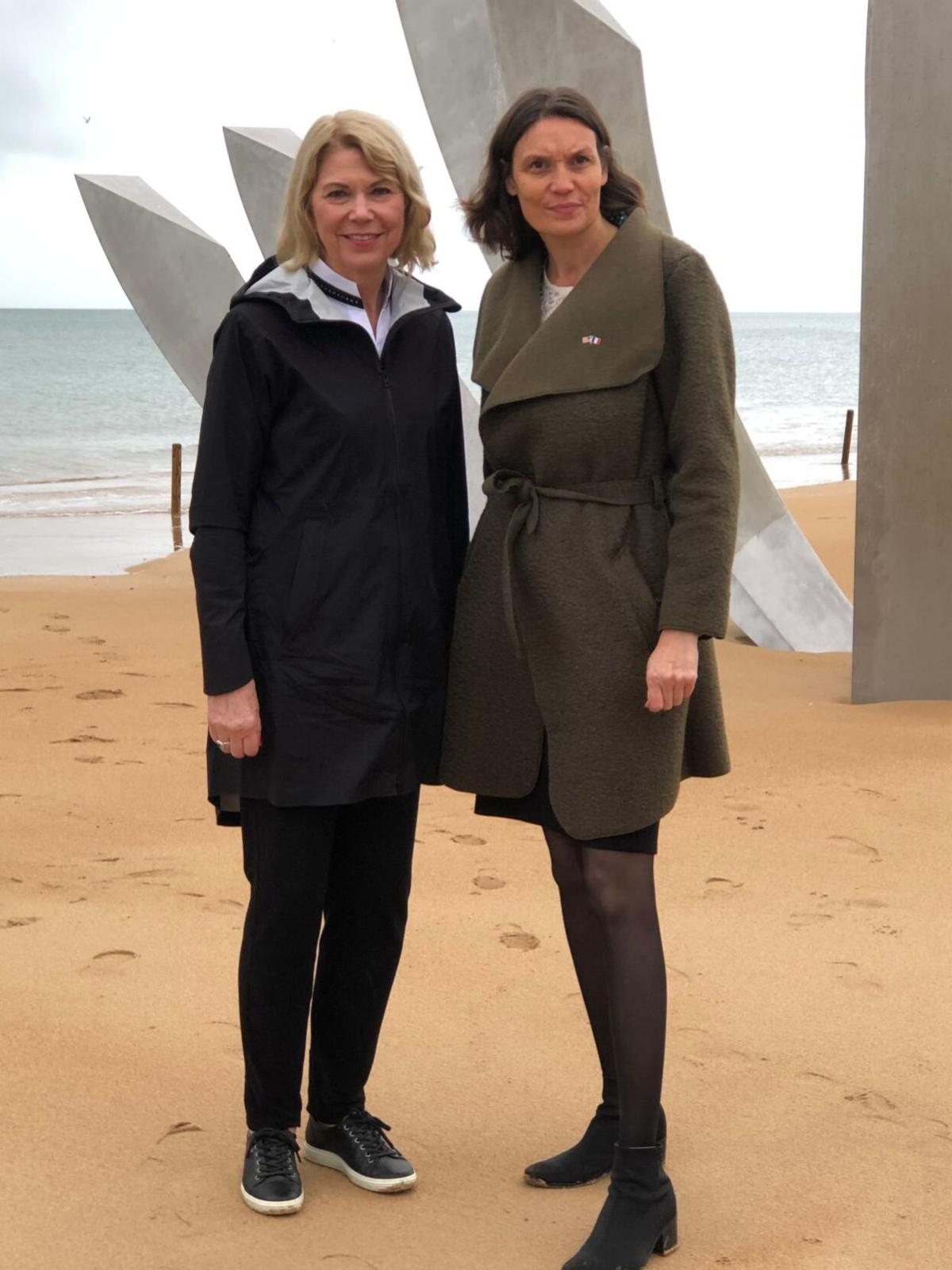 Mayors Jean Stothert of Omaha and Anne Boissel of Isigny-Omaha Intercom in France on Omaha Beach in October. 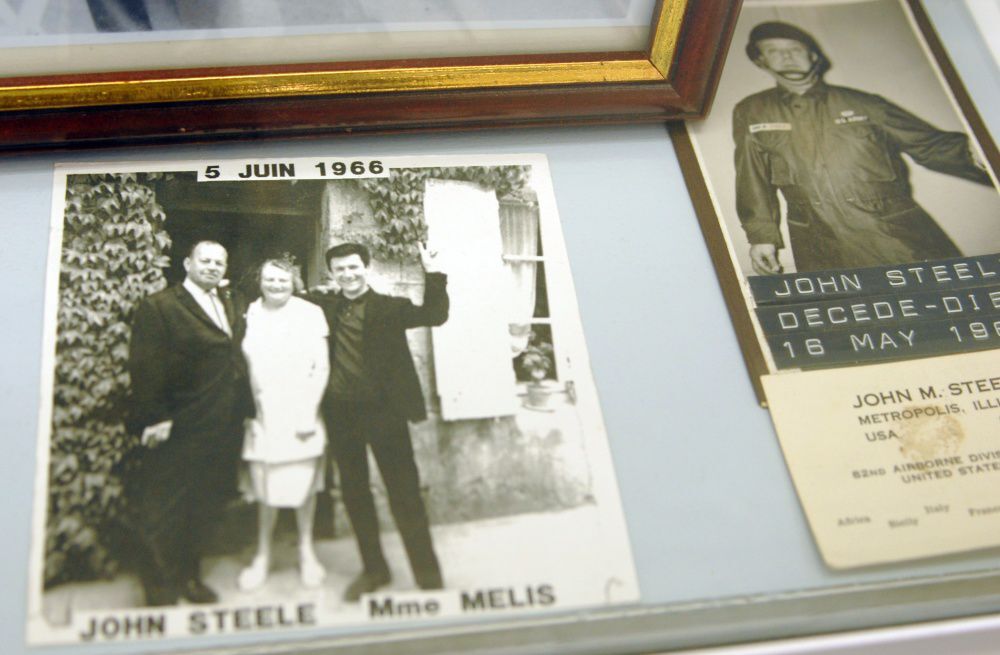 Artifacts about Pvt. John Steele are displayed in a museum in Sainte-Mère-Église, France. 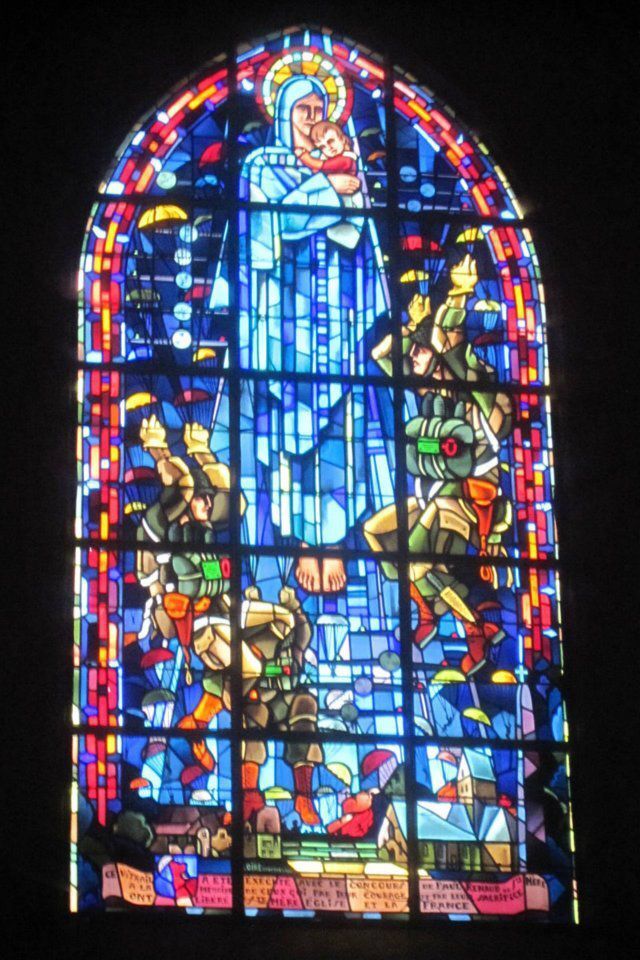 One of the stained-glass windows in the church in Sainte-Mère-Eglise is dedicated to the memory of the paratroopers who parachuted into the town just after midnight on D-Day.

Pvt. John Steele's effigy still hangs from the steeple of the church in Sainte-Mère-Église, France, the first town liberated by Allied forces after the D-Day invasion on June 6, 1944.

Artifacts about Pvt. John Steele are displayed in a museum in Sainte-Mère-Église, France.

One of the stained-glass windows in the church in Sainte-Mère-Eglise is dedicated to the memory of the paratroopers who parachuted into the town just after midnight on D-Day.

Under the canopy of his parachute, Pvt. John Steele descended into hell at midnight.

The 82nd Airborne paratrooper saw on the ground below him French villagers fighting a barn fire in the village square, rifles trained on them by German soldiers.

Steele drifted toward the church in the square of the town of Sainte-Mère-Église, until his chute got caught on the steeple. He hung there for several hours, wounded in the foot, pretending to be dead to avoid being shot by the Germans. That was the fate of one other soldier who also got hung up on a roof.

The next morning — June 6, 1944 — Allied forces who had landed on the nearby beaches of Normandy captured Sainte-Mère-Église, the first French town to fall. Eleven months later, after a long and bitter campaign, Nazi Germany surrendered.

At 6:44 p.m. Saturday in France, bells will ring at the church in Sainte-Mère-Église, and at dozens of other churches across Isigny-Omaha Intercom, a federation of 59 townships across the Normandy region.

On both sides of the Atlantic, the bells are intended to celebrate the freedom that followed the D-Day landing in France, and to honor those who fell liberating Europe from Nazi domination.

“It’s solemn because you’re recalling the loss and sacrifice,” said Andy Schilling, vice president of the Omaha Sister Cities Association and a driving force in the new Omaha-Isigny partnership. “But it’s joyous because it’s the liberation of Europe.”

The Sister Cities group has reached out to places of worship of all faiths across the city and encouraged them to ring their bells, said Bernie Duhaime of Alliance Française Omaha, a 100-year-old group that promotes French culture and language in Nebraska. It’s not known how many will join in.

“No one has said no to us,” Duhaime said.

The University of Nebraska at Omaha plans to ring the chimes on its carillon bell tower, he said, as will Countryside Community Church on the Tri-Faith Initiative’s campus.

Because of the COVID-19 pandemic, D-Day commemorations traditionally held in Europe and the U.S. aren’t possible this year.

Duhaime said that was hard to take for the French people of Normandy, whose gratitude to the armies that liberated their land remains strong, even though the number of people who remember the invasion is dwindling.

“It’s not something they can just walk away and forget,” Duhaime said.

The idea of ringing the bells came in a series of trans-Atlantic phone calls between the communities’ friendship programs.

“They said, ‘Let’s all ring the bells at the same time,’ ” Duhaime said.

The friendship between the two regions is rooted in the link between Omaha and Omaha Beach, one of five code names for the landing beaches used on D-Day.

The reason one of the sites was named for Omaha has never been proven, though in 2008, World-Herald writer Henry Cordes uncovered a possible link through Omahan Gayle Eiler. He was a carpenter who helped remodel the London office of U.S. Army Gen. Omar Bradley, who picked the names of the target beaches. Eiler understood that Bradley had named Omaha and Utah Beaches after the homes belonging to him and another carpenter.

Historians have said the story is plausible but have not been able to confirm it. Eiler died in 2003.

Despite the link between Omaha and the Omaha Beach area, a sister city relationship seemed unlikely. Usually, they are formed between cities of roughly equal size, Schilling said. Omaha has six other sister cities.

But the villages near Omaha Beach mostly had only a few hundred residents each. Even Isigny-sur-Mer, the Intercom’s namesake city, has only about 3,700 residents. The entire Isigny-Omaha region has about 27,000.

Partnering with the Intercom made more sense. The idea won approval from Mayor Jean Stothert after it was proposed in 2018.

“It was exactly the region where our guys hit the beach,” said Schilling, a former State Department officer now working in international development with the Greater Omaha Chamber of Commerce. “It moved really fast.”

The partnership was announced on D-Day last year, after a visit in March by several Isigny-area mayors to Omaha. Stothert led a 64-member delegation to Normandy in October for the signing of a formal friendship agreement, preliminary to the formation of a formal sister city partnership.

Schilling said COVID-19 has slowed the progress of making Omaha and Isigny-Omaha into true sister cities.

“It’s hard. We’ve had so many types of exchange programs that we haven’t been able to do,” he said.

But Saturday’s bell-ringing reinforces that the ties will remain after the virus is gone.

Pvt. John Steele survived his ordeal atop the church at Sainte-Mère-Église. German soldiers cut him down during the night and took him prisoner, but he escaped four days later and returned to duty.

After the war, he returned to his hometown of Metropolis, Illinois, worked as a tradesman for electrical companies, married, divorced and remarried.

In 1957, he told his story to Cornelius Ryan, who was conducting research for what would become the book “The Longest Day.” Steele earned a measure of fame when Ryan included 20 lines on his misadventure. The fame intensified when actor Red Buttons portrayed him in the 1962 movie version of the same book.

Steele died of cancer in 1969, at age 56. But his story lives on in Sainte-Mère-Église, where his uniformed effigy, still attached to a tangled parachute, hangs from the church steeple, a little below the bell. It is photographed every day by tourists.

On Saturday, that bell will ring again.

D-Day: How Nebraskans influenced the invasion of Normandy

How did Omaha Beach get its name? How did a Nebraskan end up inventing "the boat that won the war?"

D-Day: 'The boat that won the war' was designed by a Nebraskan

For years, it was a mystery how a modest landlocked city on the Plains came to have its name attached to the bloodiest beach — Omaha — of the …

D-Day, as experienced by Nebraskans

Many Nebraskans experienced D-Day firsthand, storming ashore at Omaha or other Normandy beaches on June 6, 1944. Here are their memories, as t…

More than 50 students will plant flags at Omaha Beach cemetery and march in parade at Sainte-Mère-Église.

Editorial: D-Day anniversary is a time to honor the courage, sacrifice of Allied forces

Several regional examples reflect the courage and sacrifice made by many, including a Nebraska man killed in June 1944, whose remains were recently identified.

A World War II veteran who was part of D-Day shared his memories of the invasion with high school ROTC members who are planning a trip to Normandy next year.

Seventy-four years to the day after their deaths, Ludwig and Julius Pieper, identical and inseparable twins, are side-by-side again, beneath marble crosses in the green fields of the Normandy American Cemetery.

Sgt. Melvin Anderson's journey back to his home state of Nebraska ended only this week, with his military burial Friday at Omaha National Cemetery.

Dau Nguyen, who now lives in Lincoln, is one of 125,000 to 150,000 South Vietnamese refugees who fled the country 45 years ago this week as its army collapsed under an onslaught from communist forces.

As a retired history teacher (among other things) I appreciate your work, thank you.