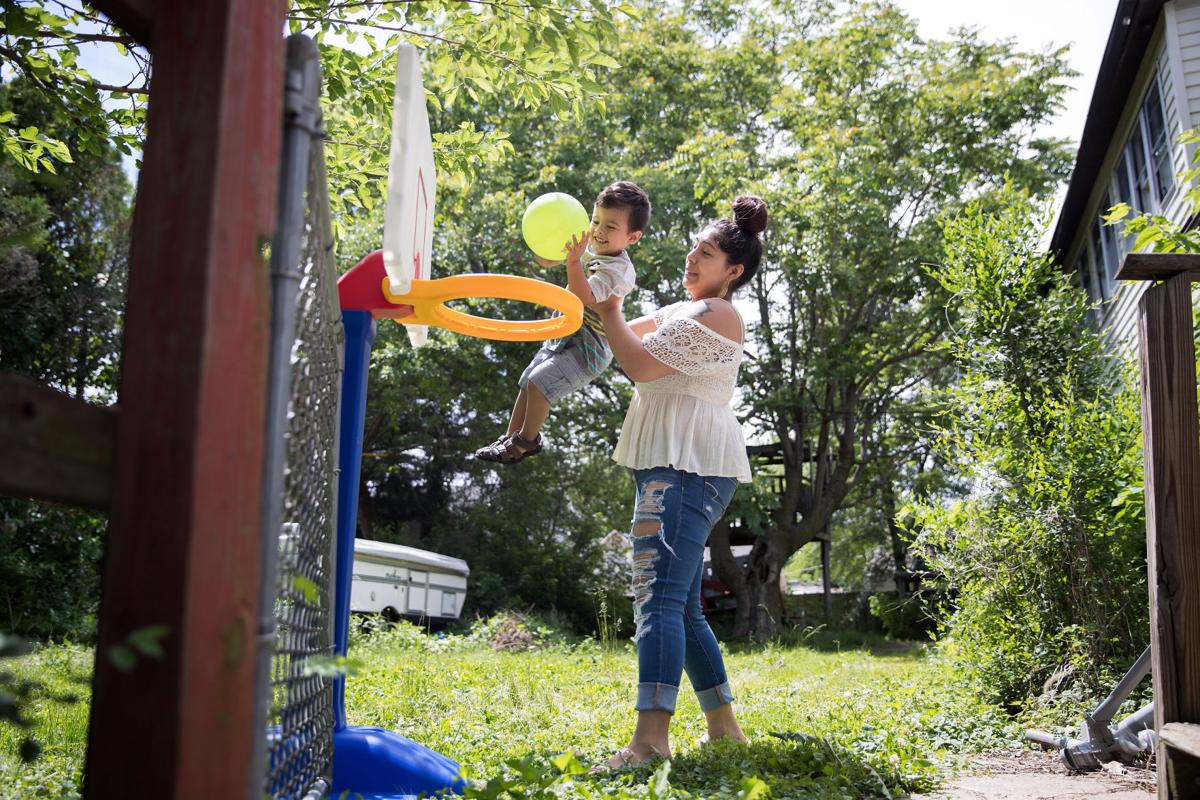 Susie Gonzalez, 19, plays with her son, Xavier, who was born during her junior year at South High. “If I had stayed in school, I’d probably be working a better job now.” 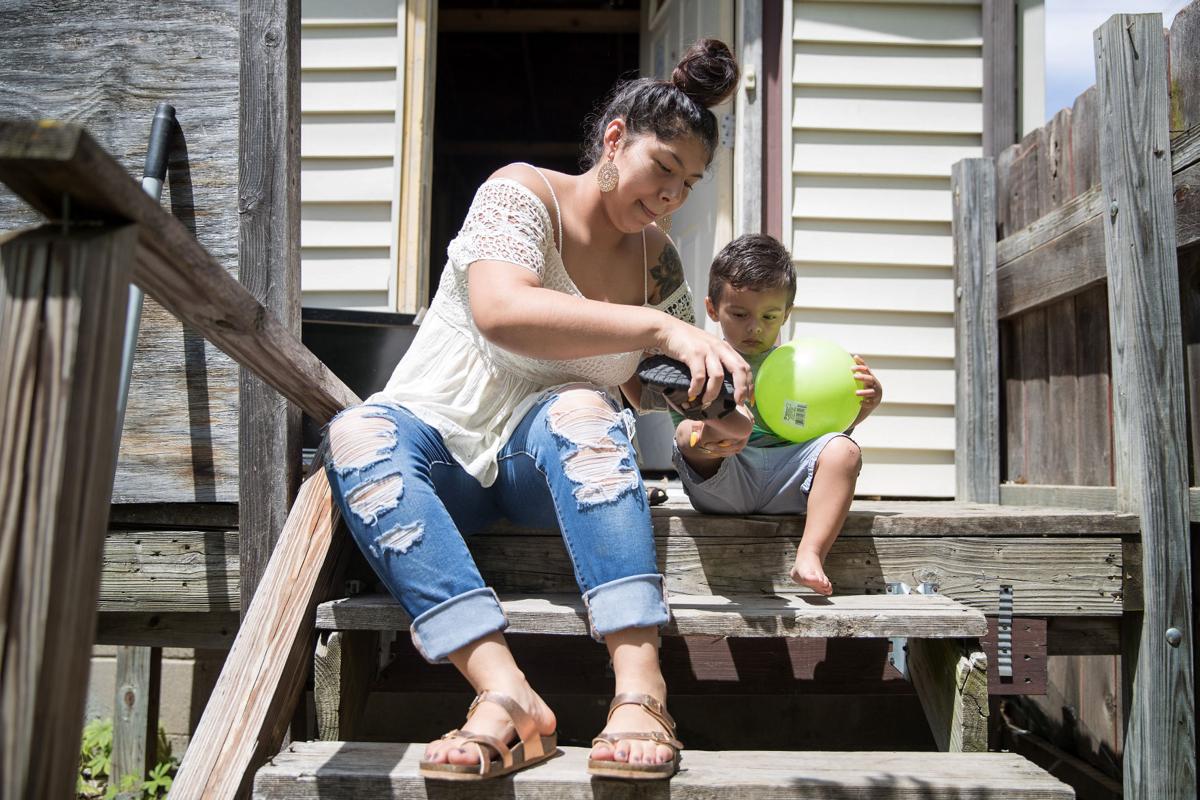 Susie Gonzalez, 19, puts shoes on her son Xavier, 2, outside their home in Omaha. Gonzalez dropped out of high school during her junior year when she gave birth to her son. 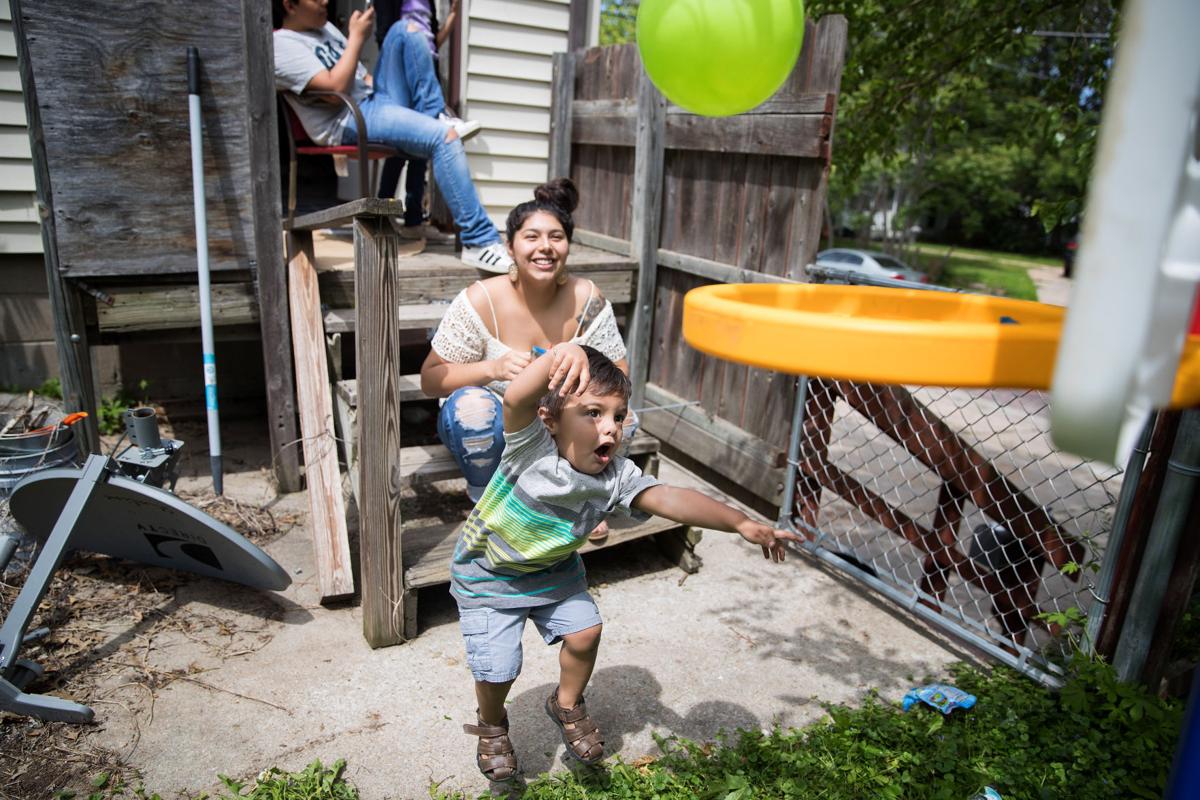 Susie Gonzalez, 19, watches as her son Xavier, 2, plays basketball outside their home in Omaha. Gonzalez dropped out of high school during her junior year when she gave birth to her son. 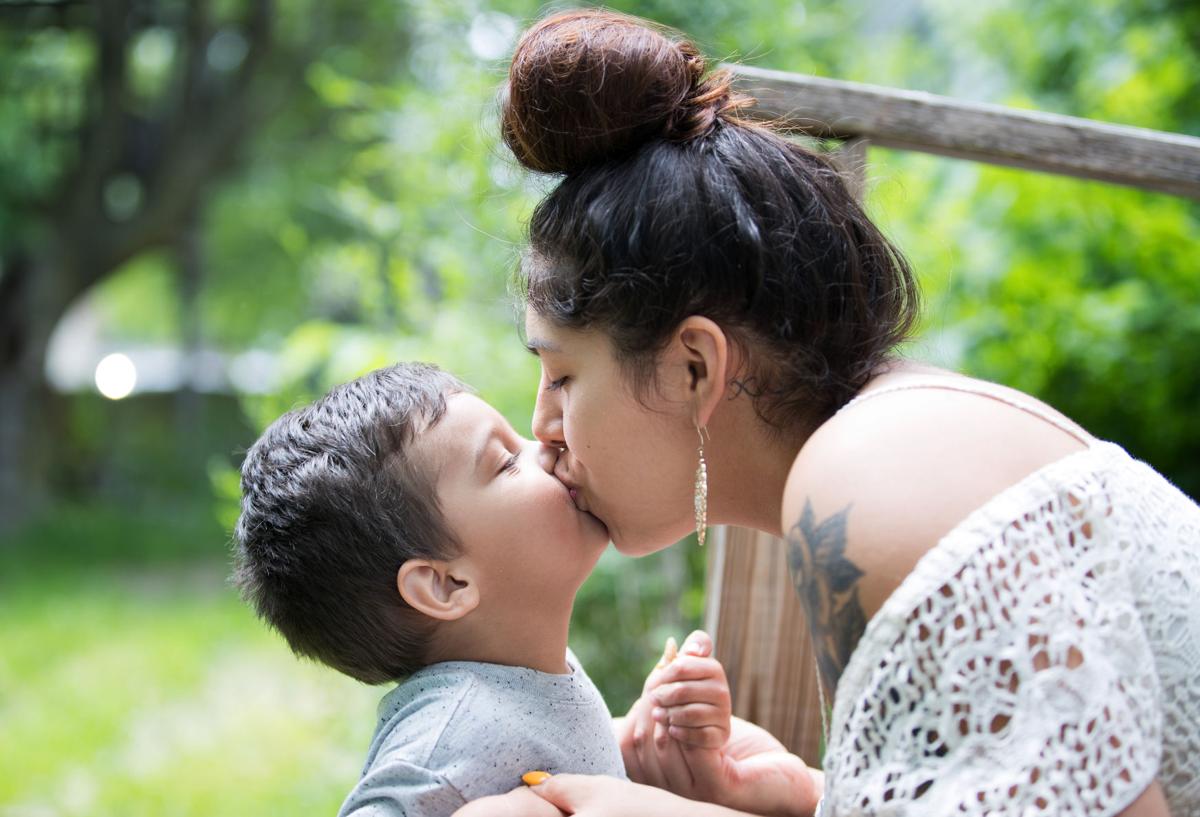 Susie Gonzalez, 19, kisses her son Xavier, 2, outside their home in Omaha. Gonzalez dropped out of high school during her junior year when she gave birth to her son. 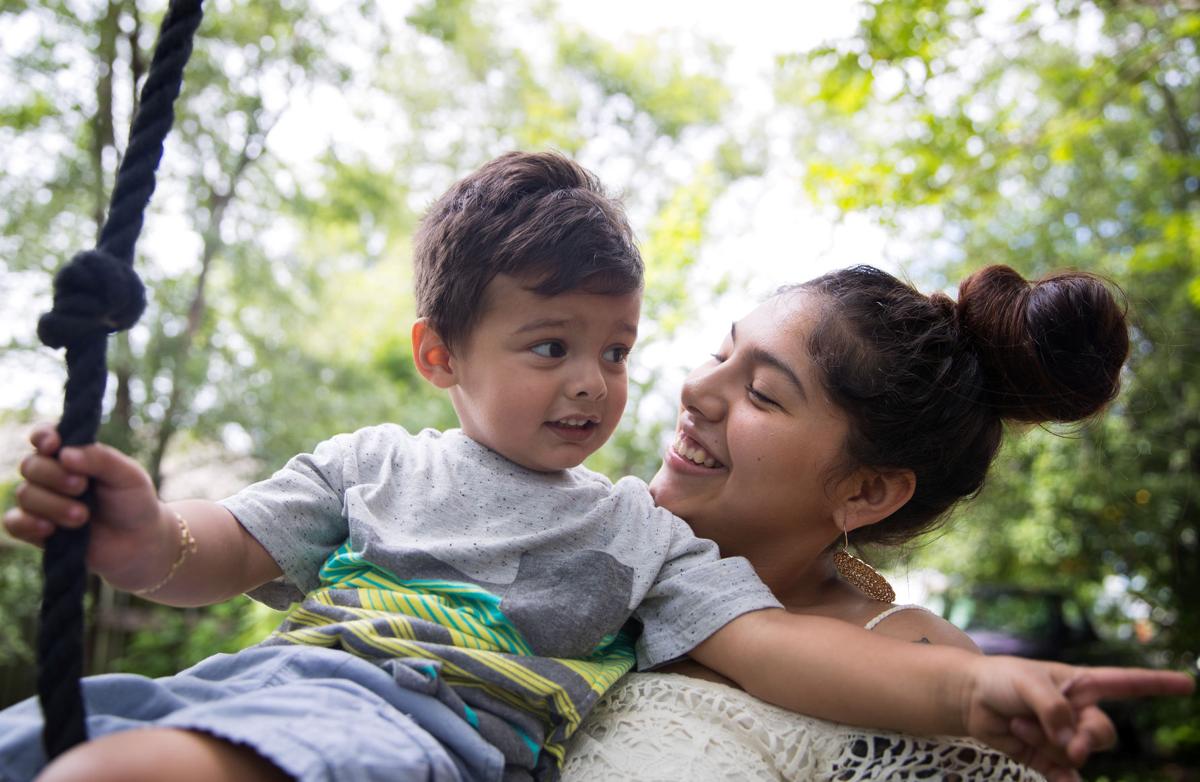 Susie Gonzalez, 19, plays with her son Xavier, 2, outside their home in Omaha. Gonzalez dropped out of high school during her junior year when she gave birth to her son.

Susie Gonzalez, 19, plays with her son, Xavier, who was born during her junior year at South High. “If I had stayed in school, I’d probably be working a better job now.”

Susie Gonzalez, 19, puts shoes on her son Xavier, 2, outside their home in Omaha. Gonzalez dropped out of high school during her junior year when she gave birth to her son.

Susie Gonzalez, 19, watches as her son Xavier, 2, plays basketball outside their home in Omaha. Gonzalez dropped out of high school during her junior year when she gave birth to her son.

Susie Gonzalez, 19, kisses her son Xavier, 2, outside their home in Omaha. Gonzalez dropped out of high school during her junior year when she gave birth to her son.

Susie Gonzalez, 19, plays with her son Xavier, 2, outside their home in Omaha. Gonzalez dropped out of high school during her junior year when she gave birth to her son.

Up to half of all teen moms drop out before they finish high school.

It’s a worrisome statistic given that the lack of a high school diploma can hurt a teen’s future earning potential and can contribute to multiple generations of poverty.

And it’s a fact that helped lead to a new state law requiring school districts to adopt policies spelling out how they’ll accommodate teen parents.

Schools must outline how they’ll address a number of challenges faced by teen parents.

Can they continue breast-feeding when they return to school? How will school absences be covered? Where can they find reputable child care?

Legislative Bill 427 was approved last month on a 31-7 vote, despite objections from some rural senators who said smaller school districts don’t need another legislative mandate.

Many public schools already have policies assuring pregnant students that they can stay in school — a reversal from the past, when teen mothers may have been shamed or forced out. The federal gender and education law, Title IX, and a state law prohibit schools from discriminating on the basis of sex and pregnancy.

But State Sen. Tony Vargas, a former Omaha Public Schools board member, said he sponsored LB 427 because Nebraska schools are doing an inconsistent job of supporting pregnant and parenting students.

Teen parents can face big challenges when it comes to finishing high school.

Susie Gonzalez, 19, experienced that firsthand when she became pregnant while attending Omaha South High School. She missed class when morning sickness left her weak and unable to keep food down. Her junior year, she gave birth to her son, Xavier, and found that sometimes she could only finish homework at 2 a.m., between feedings.

She was able to breast-feed and store milk in the nurse’s office at South, but decided she needed a quicker path to a diploma. She enrolled in an accelerated program through OPS, but she ultimately dropped out.

She wishes the school had a more flexible absence policy to account for doctor’s appointments. But there were external pressures, too. Without reliable child care, she struggled to get to class and felt pressure to earn a paycheck.

“Back then, I thought ‘I have to get working, because he needs diapers,’ ” Gonzalez said. “If I had stayed in school I’d probably be working a better job now with a diploma.”

Organizations such as the federal Centers for Disease Control and Prevention estimate that only 40 to 50 percent of teen moms earn a high school diploma by age 22.

Vargas acknowledged that teens may face outside factors, such as a lack of family support or motivation to finish school. But schools should help dismantle any educational barriers that keep students from graduating, he said.

The law is split into two parts. The first applies to all schools — public, private and parochial — and requires schools to accommodate teen moms who breast-feed and provide a private space where they can pump and store milk.

The second requires public school boards to develop policies that address student absences, provide alternate coursework such as tutoring or online classes, make accommodations for breast-feeding students, and identify quality child care options. Or they can borrow a model policy to be created by the Nebraska Department of Education.

But educators at some smaller, rural school districts said more policies and paperwork aren’t the answer. School officials say they want every student to graduate and already work with pregnant or parenting students to catch up on credits or apply to college.

Daniel Fehringer is the superintendent of Winnebago Public Schools in Thurston County, which has one of the highest teen birthrates in Nebraska. This year’s senior class of 30 students had one teen mom. Other years, Fehringer said, there have been six or seven teen parents, including fathers.

The high school already provides a place for students and staff to pump breast milk, has held parenting classes over lunch and works individually with student parents, he said.

Vargas said his bill was spurred by an American Civil Liberties Union of Nebraska records request that revealed wide inconsistencies in how schools work with teen parents.

Only 17 percent had formal policies that addressed the breast-feeding needs of students, although many say they work with students on a case-by-case basis.

Some students reported that they didn’t have a private or sanitary place to breast-feed or pump. They struggled to coordinate how to make up missed assignments.

“It’s not that we don’t do a good job as the State of Nebraska to support pregnant and parenting students, it’s that we do an inconsistent job,” Vargas said.

Nationally and statewide, teen birthrates have been dropping for years. In Nebraska, 1,411 teen births were recorded in 2014, about 5 percent of the total births that year.

Several districts are already making plans to revamp their policies. Bellevue Public Schools officials said they plan to change absence policies to comply with the new law, most of which will go into effect in the 2018-19 school year.

A spokeswoman for the Elkhorn Public Schools said that the district’s two high schools already have private spaces for nursing mothers and that Elkhorn’s absence policy provides for an appeals process for pregnant students.

Bellevue West guidance counselor Melissa Minahan said school staff members work with teen parents to come up with individual plans so they can stay in school. Students might switch to a half-day schedule, or teachers can send work home while students recuperate after labor.

“Our goal is for those students to earn a diploma and continue on with school,” she said.

Bellevue West also has an on-site Sarpy County Cooperative Head Start program that students can use for child care. Students can check in on their child or breast-feed during lunch breaks or study hall, Minahan said.

Katharina Clapper, 19, found out she was pregnant at age 15, when she was a sophomore at Bennington Junior/Senior High School. Her daughter, Bryleigh, is now a toddler.

Clapper dropped out, took classes online and eventually earned her GED. She is a certified nursing assistant and is considering going back to school to study special education.

She left high school because she couldn’t imagine leaving her daughter, who exclusively breast-fed, at home as Clapper went to school. Having child care at the school would have helped, she said, but for many schools, that’s not feasible.

“I felt, like, if I was in high school I’d rely on other people to raise my daughter, and I didn’t want that,” Clapper said. “I wanted to be at home with her.”

After stints working in fast food and health care, Gonzalez, the young Omaha mom, is enrolled in a federal Job Corps program in Denison, Iowa, where she can work on earning her high school diploma and receive job training and on-site child care. Her son is a blessing, she said, but she advises teens to wait to become parents.

“School is very important, and now it’s even more clear to me. Here I am struggling because I didn’t finish school.”