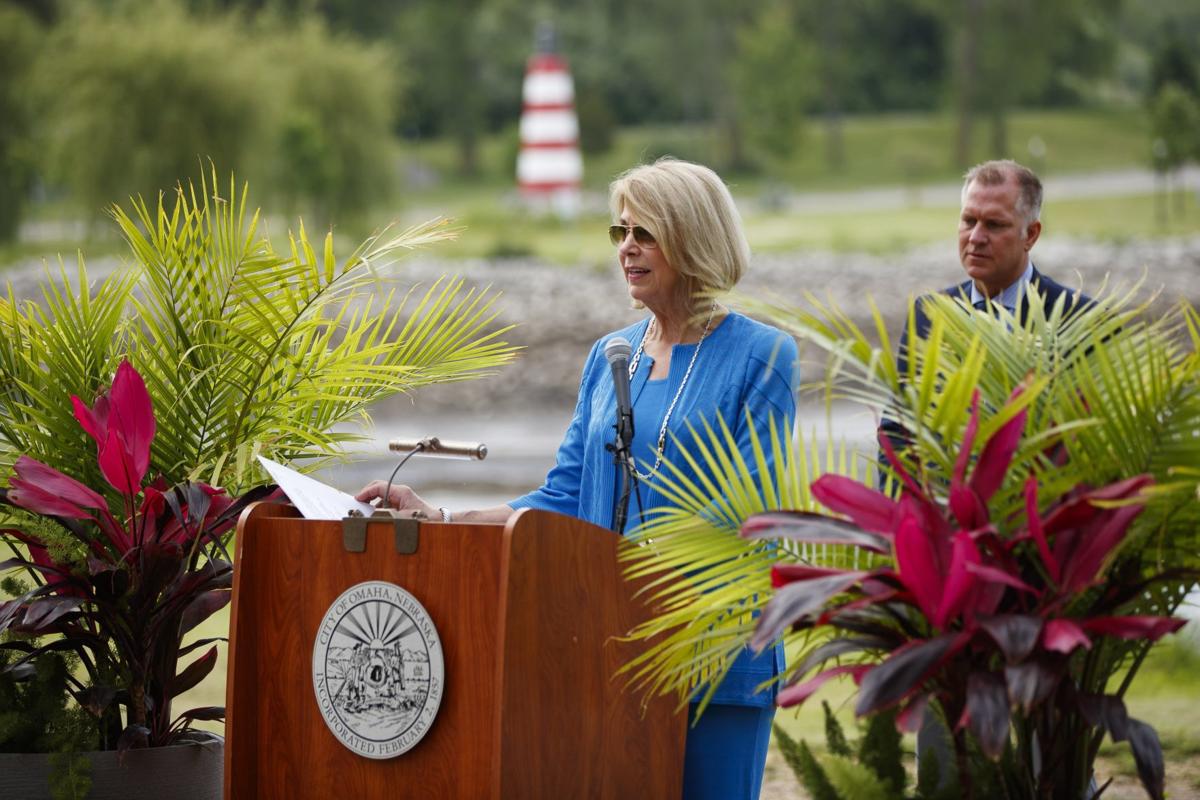 Omaha Mayor Jean Stothert, left, speaks during a press conference as Brook Bench, Omaha’s parks director, listens. Stothert is among the public officials who say they do not consider holding the tax rate steady to be a tax increase. 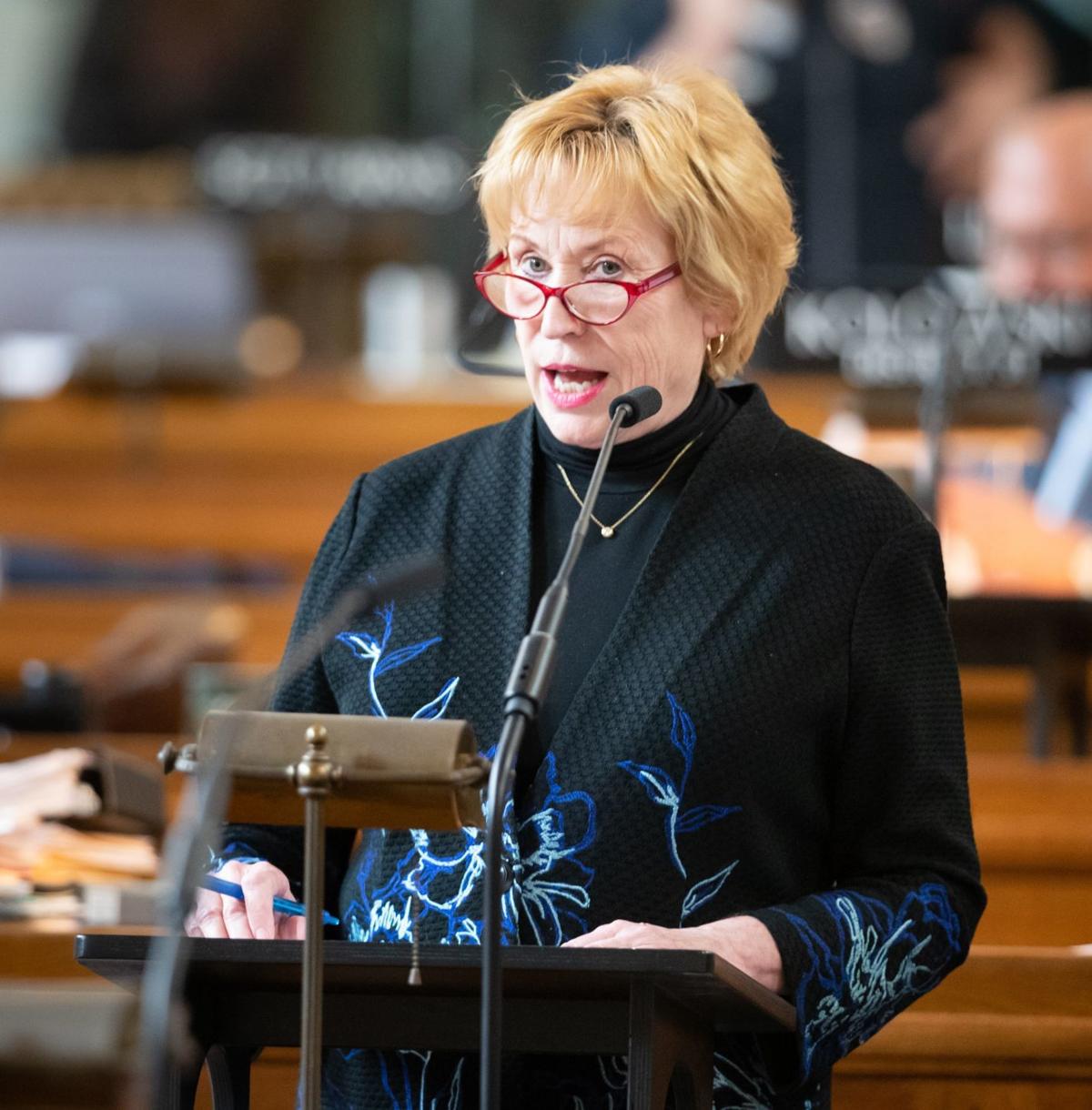 State Sen. Lou Ann Linehan, sponsor of Legislative Bill 103, said she borrowed the idea for the measure from Virginia, where she and her family lived while she served in the State Department and as chief of staff for former U.S. Sen. Chuck Hagel.

Nebraska property taxpayers should start seeing double this year, with a new state law requiring all levels of local government preparing to collect more in property taxes the next year to hold a second public hearing and vote.

For instance, the City of Omaha.

The reason the city predicts the same tax rate will collect more revenue: The Douglas County assessor projects that the total valuation of properties within the city limits will increase by 6.65%.

Omaha City Council President Chris Jerram said he does not consider holding the tax rate steady to be a tax increase. Neither does Stothert. Both have said they realize that some constituents might disagree.

The Nebraska Legislature does. It unanimously passed Legislative Bill 103 in March to help rein in the growth of property taxes.

She also wanted people to have a chance to speak up earlier in the budgeting process.

“We have to be clear about language,” Linehan said. “I don’t know whether they should or should not spend. But taxes don’t have to go up. They could drop the levy.”

The new law requires transparency from local governments with property taxing authority in the form of a separate public hearing and vote when they plan to collect more in property taxes than the year before.

It also makes them advertise the separate public hearing in a newspaper of record.

Local governments that expect local property valuations to increase can avoid the hearing and vote by lowering their property tax rates enough to collect the same amount as they did in the previous year.

Spending by many local governments has been growing faster than inflation, Linehan said.

That affects the state’s bottom line because Nebraska spends almost $400 million a year on local property tax relief. For example, in 2020, Nebraska is set to spend $88 million on the homestead exemption, which offsets local property taxes for the elderly and disabled.

Local governments have for years filed reports with the state auditor that disclosed property tax collections.

Vokal, a former member of the Omaha City Council, said he hopes that local leaders might think twice about casting votes that future political opponents could describe as votes to increase property taxes.

“This law requires them to hold a separate public hearing, explain why they want to keep the windfall and go on record,” Vokal said.

More reflection about the collective cost of increased spending by local governments — including bond issues — might help Nebraska avoid a voter revolt on property taxes, Vokal said. Taxpayers, he said, are “fed up.”

Linehan said she borrowed the idea for LB 103 from Virginia, where she and her family lived while she served in the State Department and as chief of staff for then-Sen. Chuck Hagel.

Omaha scheduled a second budget public hearing and vote for Sept. 10. Each will acknowledge that the city expects to collect more in property taxes in 2020 using the same property tax rate as 2019.

In some ways, the City of Omaha remains hampered by its 2010 attempt to increase street funding by expanding the wheel tax.

you can wipe your A** with that bill!!

Ah, another crass and meaningless comment from J Reacher.

(And you know you could have added a few more exclamation points to illustrate your disgust !!!!!!)

"Local officials say cities, counties, school districts and natural resources districts have long used the windfalls from valuation growth to cover the rising costs of governing, including inflation, salaries, health care and retirement (pensions).". It's about time again for the OWH to explore the salaries and benefits of city employees. I am seeing too many of these city and county retirees living like rockstars in retirement.

Not disagreeing, but the salaries of every city employee (and other public agencies) is online. Among others, the World Herald provides the info online.

"Omaha City Council President Chris Jerram said he does not consider holding the tax rate steady to be a tax increase. Neither does Stothert. Both have said they realize that some constituents might disagree." I disagree! My taxes will go from $3,500 to $3,700. Looks like an increase, walks like a tax increase. How am I wrong Chris?