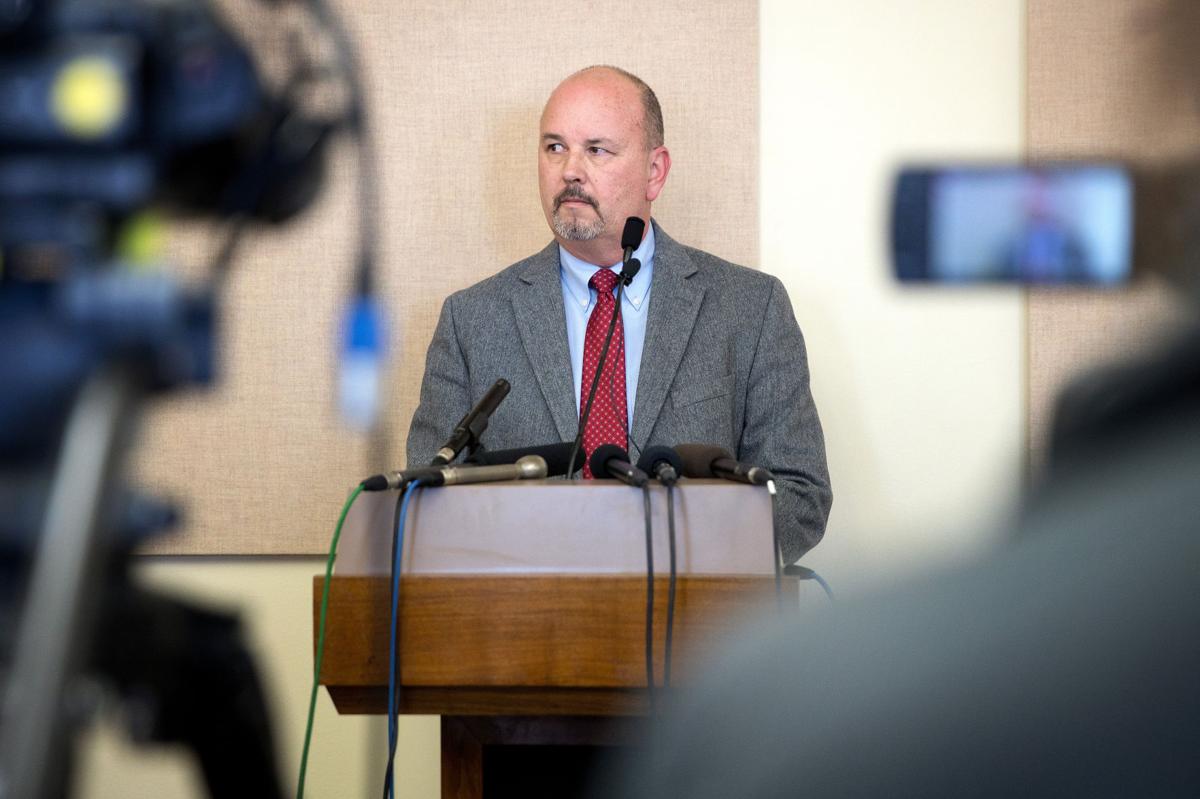 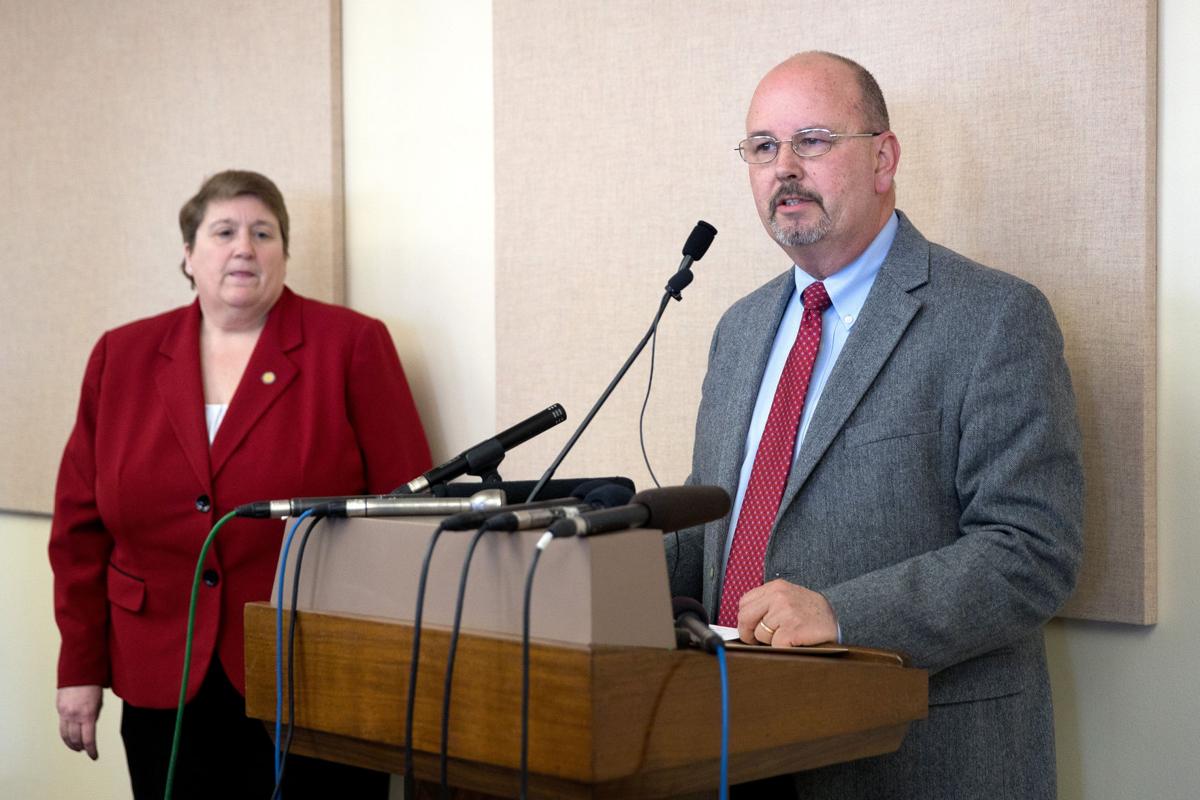 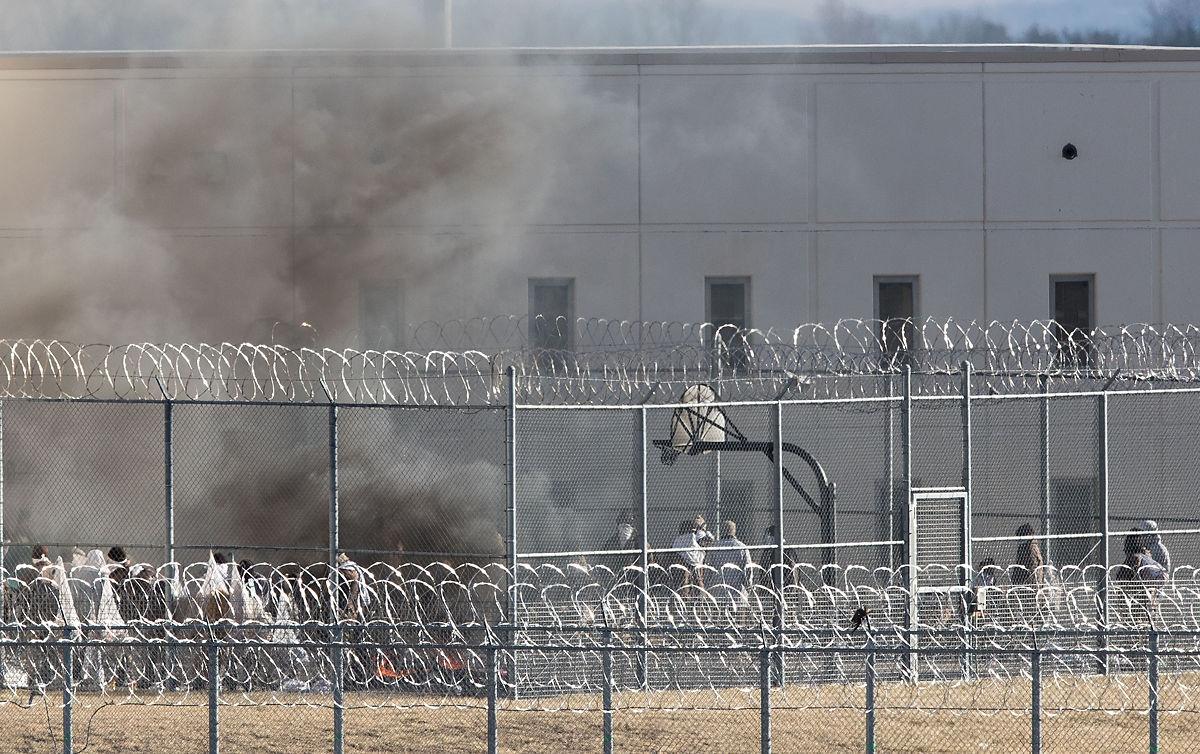 The Tecumseh State Prison was on lockdown and parts of it on fire Thursday afternoon. 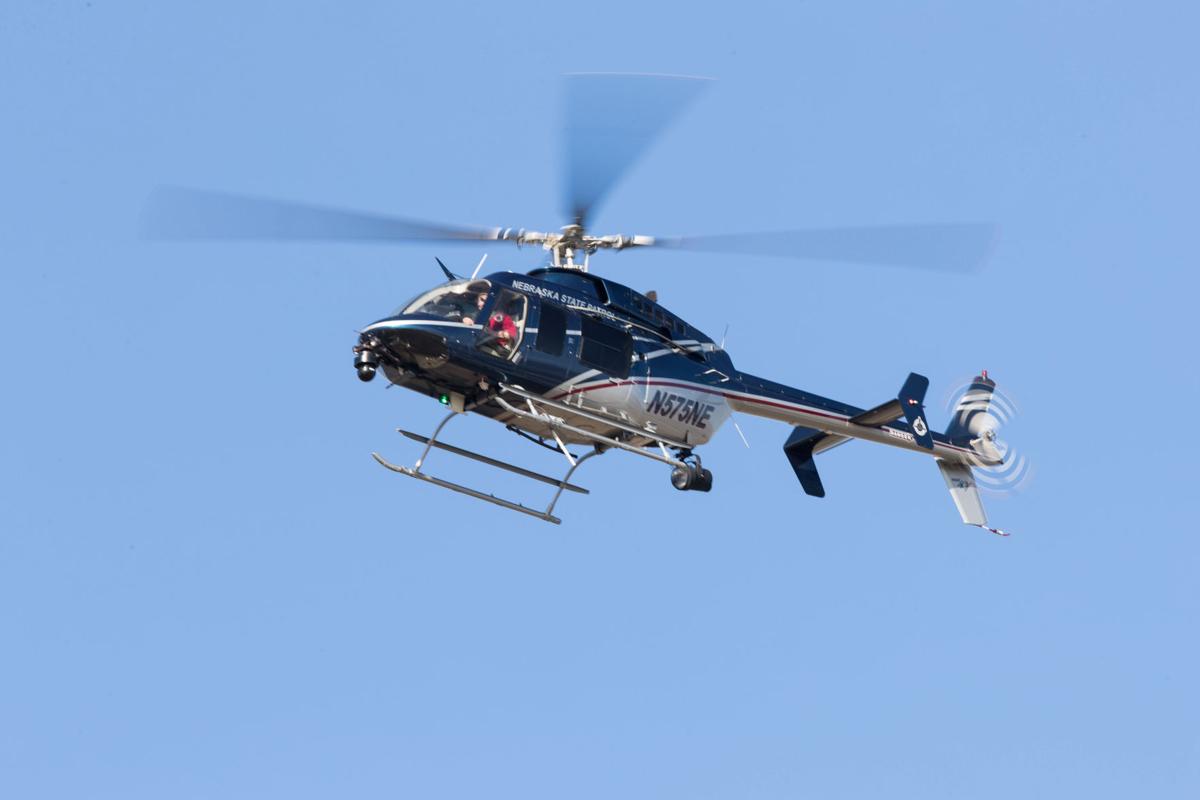 A Nebraska State Patrol helicopter circles the Tecumseh State Prison after inmates started a fire in a prison yard on Thursday. 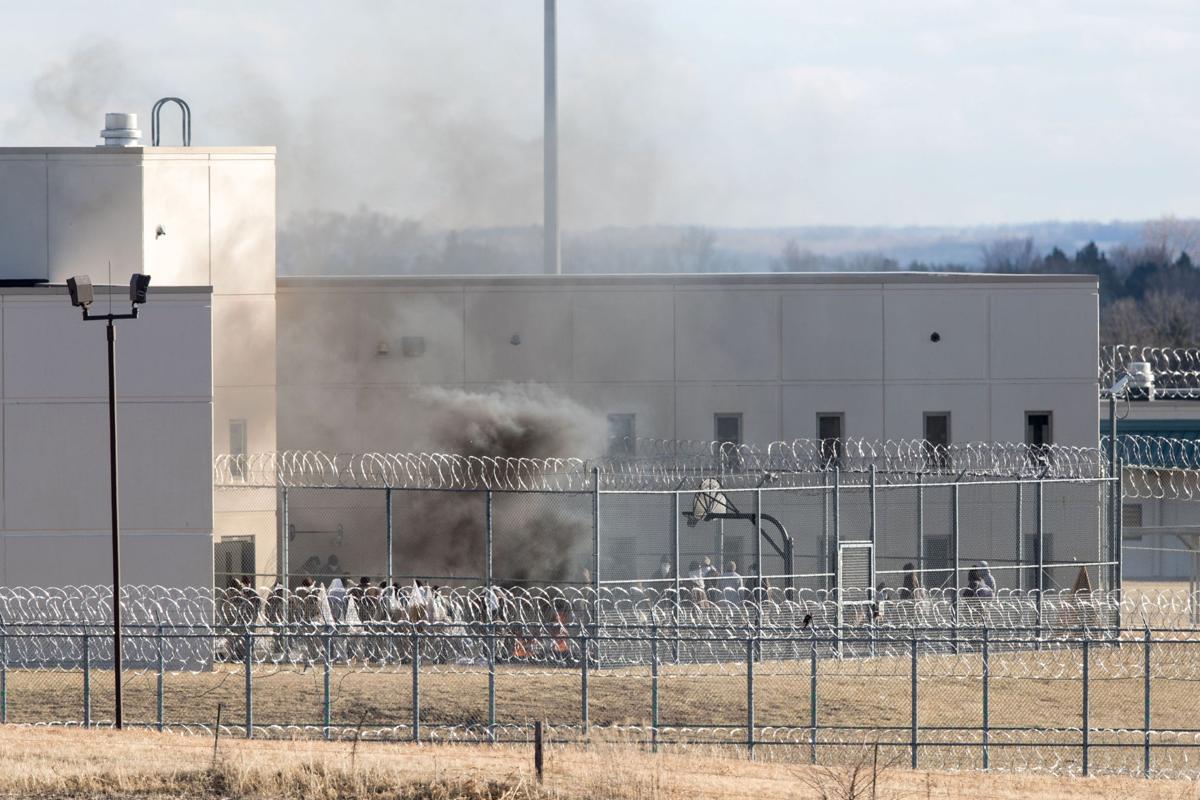 Smoke billows from a fire set by inmates at Tecumseh State Prison on March 2. 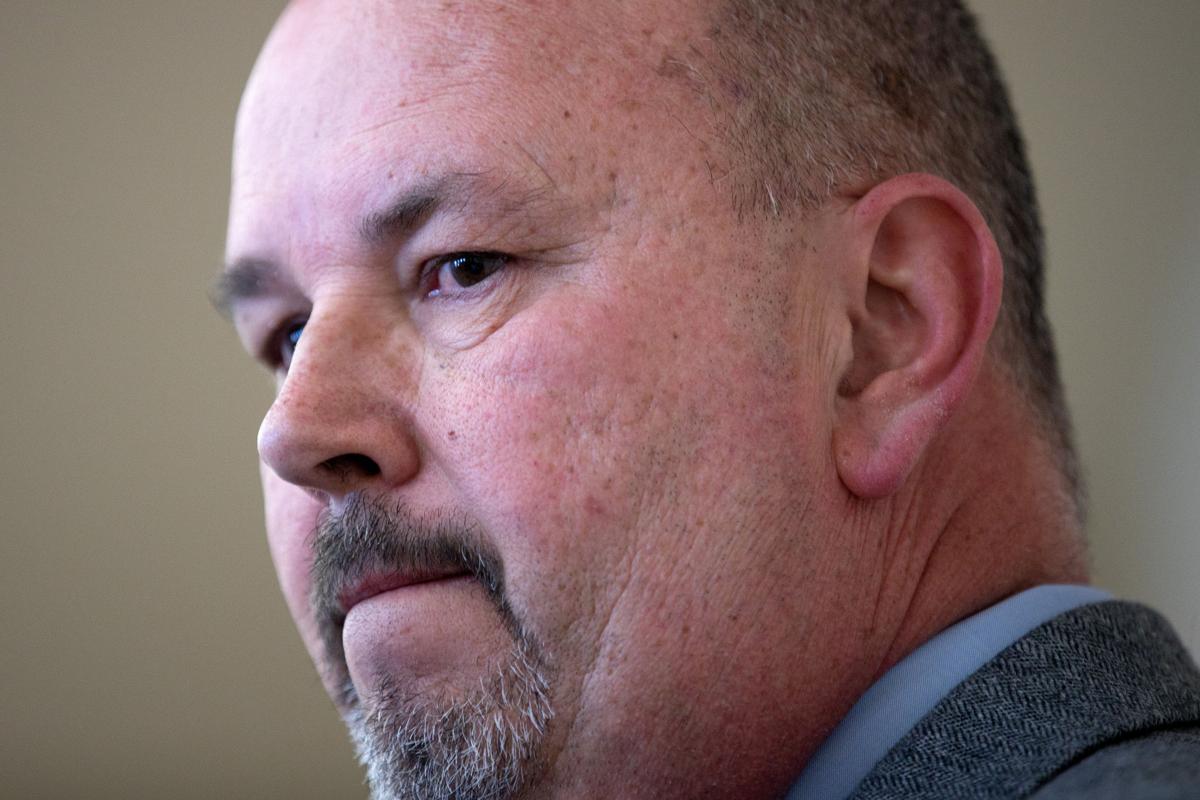 State Corrections Director Scott Frakes listens to questions from the media during his press conference on the deadly melee at Tecumseh State Prison in March.

Nebraska Corrections Department Director Scott Frakes provides an update to the media Friday on the deadly uprising at Tecumseh State Prison a day before. 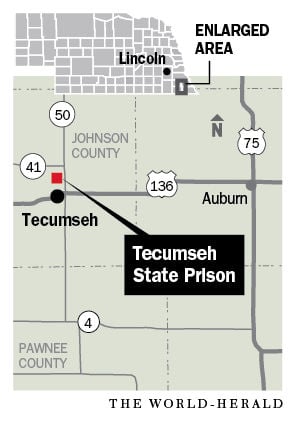 The Tecumseh State Prison was on lockdown and parts of it on fire Thursday afternoon.

A Nebraska State Patrol helicopter circles the Tecumseh State Prison after inmates started a fire in a prison yard on Thursday.

Smoke billows from a fire set by inmates at Tecumseh State Prison on March 2.

State Corrections Director Scott Frakes listens to questions from the media during his press conference on the deadly melee at Tecumseh State Prison in March.

Nebraska Corrections Department Director Scott Frakes provides an update to the media Friday on the deadly uprising at Tecumseh State Prison a day before.

LINCOLN — The deaths of two inmates this week at the prison near Tecumseh thrust Nebraska’s beleaguered corrections system back under a harsh spotlight Friday, renewing some lawmakers’ calls for immediate action, while the state’s top prison official said the incident demonstrated improvements have been made.

Corrections Director Scott Frakes told reporters during a briefing Friday he’s confident that those responsible for the deaths at the Tecumseh State Prison will be brought to justice.

Nebraska State Patrol investigators gained quicker access to the crime scene this week than they did two years ago, when a riot at the same prison also left two inmates dead. Those homicides remain unsolved.

In Thursday’s melee, Damon Fitzgerald of Omaha and Michael Galindo of Scottsbluff were killed after a group of 40 inmates seized control of a portion of a maximum-security housing unit. Ninety-five corrections officers and state troopers regained control of the unit within 3½ hours, a process that took closer to 10 hours in the 2015 riot.

Fitzgerald, 39, was serving 310 to 470 years for first-degree sexual assault, use of a deadly weapon to commit a felony, burglary and third-degree assault on a peace officer.

Galindo, 31, was serving 12 to 21 years in prison for a variety of offenses in Buffalo and Scotts Bluff Counties, including robbery, forgery and possession of a controlled substance.

Frakes, saying he did not want to comment on an ongoing investigation, declined to state flatly that his employees were not responsible for the deaths. But he read a statement from Attorney General Doug Peterson that said no evidence exists to implicate corrections staff.

That was apparently in response to comments earlier in the day by State Sen. Ernie Chambers of Omaha, who said Frakes, Gov. Pete Ricketts and other state officials were too quick to discount the possibility that inmates died at the hands of corrections staff or law enforcement officers during the incident response. Officials need to wait for completion of the investigation, he added.

On the floor of the State Legislature, Chambers said things have gone steadily downhill since Frakes was hired as state corrections director two years ago by Ricketts, whose family owns the online stock trading company TD Ameritrade.

“Ameritrade would be out of business right now if there was this much incompetency on behalf of employees,” Chambers said.

Hastings Sen. Steve Halloran also said it was wrong to “prejudge” what happened at Tecumseh before an investigation, but his perspective was different from Chambers’.

Sen. Dan Watermeier of Syracuse, whose district includes the Tecumseh prison, praised staff members for their quick reaction in isolating the uprising and keeping it from threatening public safety. Watermeier was on the prison grounds Thursday as the response unfolded.

Watermeier said the staff has improved its response to prison disturbances since a Mother’s Day 2015 riot at Tecumseh that involved as many as 400 inmates, leaving two staffers injured, two inmates dead and more than $2 million in damage. He urged his colleagues not to “meddle” when the department appears to have some positive momentum.

“These things can happen and they probably will happen in the future ... but it’s something we need to work on,” the senator said.

After the inmates set a fire about 1 p.m. Thursday in the yard outside housing unit 2, prison staff pulled out of the unit’s day room and locked it down, isolating noncompliant inmates from the rest of the prison. Fights broke out among the isolated inmates, who damaged toilets and other fixtures and equipment in the unit. They also fueled the outside bonfire, probably with books, papers and bedding materials from their cells.

A damage estimate had not yet been compiled.

The facility was fully staffed at the time the disturbance began, Frakes said. He declined, for security reasons, to reveal how many employees were on duty.

Officials spent about 30 minutes assessing the situation before making a call for emergency response personnel, many of whom had to travel about 50 miles to Tecumseh from other state prisons, in Lincoln and Omaha. The travel time largely explains why it took 3½ hours for the response team to regain control of the unit, Frakes said.

Officers wearing helmets and other riot gear and carrying shields fired nonlethal pepper balls and rubber projectiles during the operation. No firearms were discharged, Frakes added.

Corrections officials continued to insist it was improper to call Thursday’s events a “riot.” Frakes said the incident was “serious and horrific” but that the term “riot” “conjures images of a facility in chaos.”

“The word ‘riot’ also conveys to the public a risk to their safety,” he said. “No inmates were even close to breaching the secure perimeter of the facility.”

Sen. Adam Morfeld of Lincoln was among several lawmakers who questioned whether officials were trying to downplay what happened for the sake of image.

“Anytime that two individuals who are in the care of the state of Nebraska are murdered, the public safety is at risk,” Morfeld said. “All too often our concerns with the Department of Corrections are minimized and decisive action is not taken. ... The time for the department to take action is now. ... How many more people are going to have to die before we get that message?”

Lincoln Sen. Patty Pansing Brooks, who has held a key role in legislative investigations of corrections over the years, said she was not surprised by Thursday’s events. The Tecumseh prison and other correctional facilities continue to struggle with high use of mandatory overtime, high job vacancy rates and high turnover among staff, along with overcrowding and a lack of programming aimed at rehabilitating the 96 percent of the inmates who will return to society.

Lawmakers launched the first investigation after The World-Herald uncovered widespread mistakes in sentence calculations, and Nikko Jenkins went on a killing spree that left four dead in Omaha following his release from prison.

At Friday’s briefing Frakes said prison officials continue to make progress in efforts to hire and better retain staff at Tecumseh. But he challenged those who would aim all of their scrutiny at his department every time a high-profile incident occurs at a state prison.

In his estimation, prisoners seem more apt now to resort to violent disobedience than they once did.

“When violent crimes occur in the community, we blame the person responsible,” he said, “but when these same individuals act out violently in prison, there’s a rush to judge the corrections system.”

Danielle Conrad, executive director of the ACLU of Nebraska, on Friday said Nebraska can no longer afford to wait on efforts to reform the troubled prison system.

“In many ways they’re Band-Aids when a tourniquet is needed,” she said.

State law mandates that the prison population fall below 140 percent of capacity by 2020. That would require a reduction of 1,021 inmates from the current population of 5,236. If the benchmark is missed, the governor must declare an emergency and start releasing inmates.

“It’s become very clear in this most recent tragedy that litigation is no longer a question of ‘if’ but simply now a question of ‘when,’ ” Conrad said. “We are working very hard to finalize those litigation strategies.”

She called on the governor and lawmakers not to wait until 2020 but to take immediate action to address an overcrowding situation that she called “inhumane.”

Sister of inmate killed at Tecumseh: 'I'm going to do what I can to get justice'

More than anything, the sister of Michael Galindo wants answers and accountability.