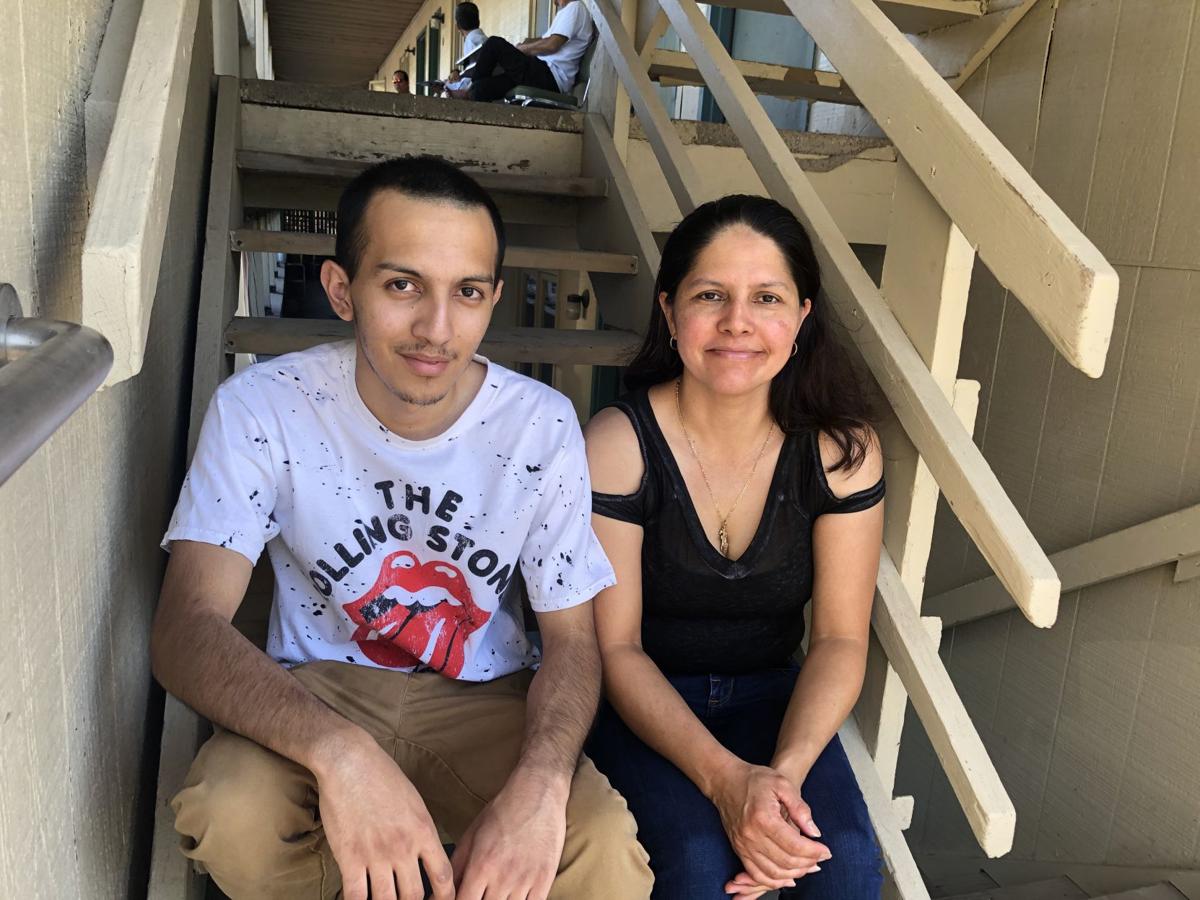 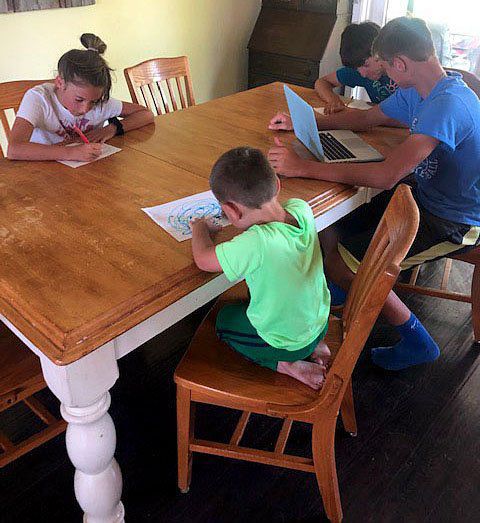 The Hrouda children at their kitchen table, where they often sit to do schoolwork. The Columbus, Nebraska, family paid to get Internet installed at their home once the COVID-19 pandemic began because they didn’t believe their mobile hot spot would be enough. “There really were very few choices,” said mom Heather Hrouda.

The Hrouda children at their kitchen table, where they often sit to do schoolwork. The Columbus, Nebraska, family paid to get Internet installed at their home once the COVID-19 pandemic began because they didn’t believe their mobile hot spot would be enough. “There really were very few choices,” said mom Heather Hrouda.

With 2-year-old twins and their five siblings at home, Jessica Valdase has her hands full.

"It's very busy,” the Omaha single mom said. “I feel like a cook, a cleaner, a teacher, a hairdresser — I'm everything.”

This spring she added another job title: Internet subscriber.

Forced by the pandemic to work at home, and having no Internet subscription, she bit the bullet and signed up in April.

It added a $69 bill to the monthly pile, stretching her already modest paycheck working as a device agent in a phone-related company, she said.

“That’s extra money out of the pocket,” Valdase said.

When Omaha Public Schools buildings closed to blunt the COVID-19 spread, suddenly the importance of Internet took on another dimension.

School officials began sending emails with websites where kids could access work and assignments, she said.

At home, there was only her work computer — no tablets or other devices for the kids.

"It's really a struggle trying to teach the children at home,” she said. “The Internet service is not the best, and I don't have multiple computers or tablets or anything to teach the kids. The only computer I have is the one that I work on."

She said she did the best she could with educational TV and flash cards to keep the kids engaged.

Valdase sees relief on the horizon with the OPS plan to provide iPads to every student.

In May, the OPS board approved the purchase of about 56,400 iPads to deploy to students this summer and fall. The district also entered into an agreement with T-Mobile to provide unlimited 4G LTE data services for the iPads. ​

The purchase means OPS students — more than 78% of whom qualify for free or reduced-price school meals — will have reliable, free Internet access and a device.

Valdase said the plan, if it works, could be a big help for her family.

Her four school-age children would be able to work on their individual tablets all at once, learning different things, while she works at home “in order to provide for my family.”

Tavaris, 14, will attend Omaha Bryan High in the fall.

She has two children who will attend Minne Lusa in the fall, J'Vier, 8, and Tyran, 5.

Three children are not in school yet, Jyran, who will be 4 in July, and the twins, Zilly and Zydin.

“I could sit them all down at the same time, here's yours, yours, yours, yours, OK, do your assignments, what you're supposed to do, let's get it done, when you're done, come to me, I'll look it over. We can go through it.”

She said that would be a faster, more efficient process than juggling her own work while trying to keep them on task.

"It will probably cut three hours out of my day,” she said.

Brayan Cerritos Osegueda, who moved to Lincoln from El Salvador with his mom in 2014, knew this was his last shot to graduate.

In December, he turned 21, which means after May he would no longer be eligible for public education. He’d started at Lincoln High in 2014, but quit going to school for much of two years, thinking he’d be OK going now and then.

“It didn’t work” he said. “I was not making good choices.”

A year and a half ago, his principal suggested he try a new program at Lincoln High to help him catch up. He took a hard look at the classes he’d been failing and asked himself why. He didn’t have a good answer.

He came back for a fifth year and was on track to graduate — he never missed class, was never late to school — when districts across the state closed their doors because of the pandemic.

“He knew his education was on the line, this was his last shot and he was doing everything he could to make it happen. Then the floor dropped out from under all of us,” said P.J. Murray, a Lincoln High coordinator who runs the program.

The biggest problem, once schools closed, was that the apartment Cerritos Osegueda and his mom lived in didn’t have Internet access. He tried using his phone, and could get emails on a Google Classroom app, but doing work from his phone just didn’t work.

On top of that, Murray said, online learning, which is largely text-based, can be more challenging for students with a language barrier.

His mom was worried that he wouldn’t be able to pass all his classes, and emailed his teacher about the Wi-Fi issues. A school administrator brought them a hotspot.

Carol Osegueda, Brayan’s mom, said she’s thankful to the teachers who helped her son, and who brought them food after her hours as a housekeeper at a local hotel were reduced. Brayan also worked some, picking up a few days of a construction job, to help make ends meet.

He said remote learning was a little harder with no teachers there to help immediately if he had questions, and it was easier to get distracted.

"You do have to think a little harder,” he said.

But having reliable Internet access made the difference, he said, and in the middle of May, with an inauspicious end to the school year, Cerritos Osegueda went back to his high school and picked up his cap and gown.

Shelia and Kody DeVries' Coffee Ranch is 30 miles northwest of Harrison in the Nebraska Panhandle.

“Honestly speaking, if somebody wouldn’t have came up here and told us that COVID-19 was going on, other than the schools shutting down, we would’ve never known,” Sheila said.

Daily life for Shelia and Kody, with their three grade-school daughters takes on different challenges than those who live among city streets of cement and asphalt.

First-grader Torri Neal, seventh-grader Sierra Eastman and ninth-grader Tamika Eastman involuntarily traded their 60-mile daily commute to Nebraska’s Sioux County Public school and back, for mornings and long days of online school on the ranch due to COVID-19 school closures.

The family had to balance school video calls and cattle brandings, a busy part of the year for cattle ranchers.

“I saw people online, on Facebook saying that their lives slowed down due to COVID, and I felt like ours just sped up,” Sheila said.

Without the family's recent technology updates, an Internet connection would have been unlikely.

A couple of months prior to the school closures, the family had a signal booster installed to amplify 4G and 3G LTE signals and also got new Wi-Fi. After COVID-19 hit, the family's Internet provider waived overage fees during the last few school months, which brought the family's bill from about $400 to $257.

“If we didn’t have that booster, we wouldn’t have anything out here,” Sheila said.

Even with the booster, the Internet struggled to connect during the week when used by all three kids.

"One day I was probably on each class for 10 minutes before the Internet kicked me off and then I could not log on," she said.

Columbus’ Heather Hrouda and her family had relied on their Verizon Jetpack mobile hotspot to keep them connected to the Internet at their Kluever Lake home a few miles northwest of the city before the pandemic.

But she knew the hotspot, which notoriously was unreliable, would have left them with only one other option once she, her husband and four children were stuck at home and needing Internet.

“All six of us would have had to pile into the car and gone outside of the school, where they had Wi-Fi, use it and pass along the one laptop we had,” Hrouda said. “That wouldn’t have worked.”

So the Hroudas bit the bullet and decided to purchase Viasat Internet service out of Omaha, as she said they couldn’t find a provider in Columbus that would install it in their neighborhood.

“There really were very few choices,” she said, noting the Internet service they had previously didn’t work well. “And if there were choices, we had to find one that was actually going to work and not just when it wanted.”

The couple thought Viasat was pricey and didn’t like that they had to sign a two-year contract before knowing if the Internet would work. It was also nerve-racking having an employee from Omaha come into their home to install it when the state was in the middle of the pandemic and health officials were telling the public to not travel and socialize, she acknowledged.

But Hrouda takes pride in looking on the bright side of things, noting the family loved being able to work on their homework over the Internet all at once to finish the school year remotely without leaving their house. This summer, they’re utilizing it by watching Netflix and Hulu, playing games and more.

“I’d like it to be more affordable and stronger,” she said. “We pay a premium for what we get. I think people know that it’s not highly available, so they know they can charge us a little more.”

OPS board to consider $625,000 settlement in assaults by former elementary teacher