Backers of medical marijuana to turn in 182,000-plus petition signatures today 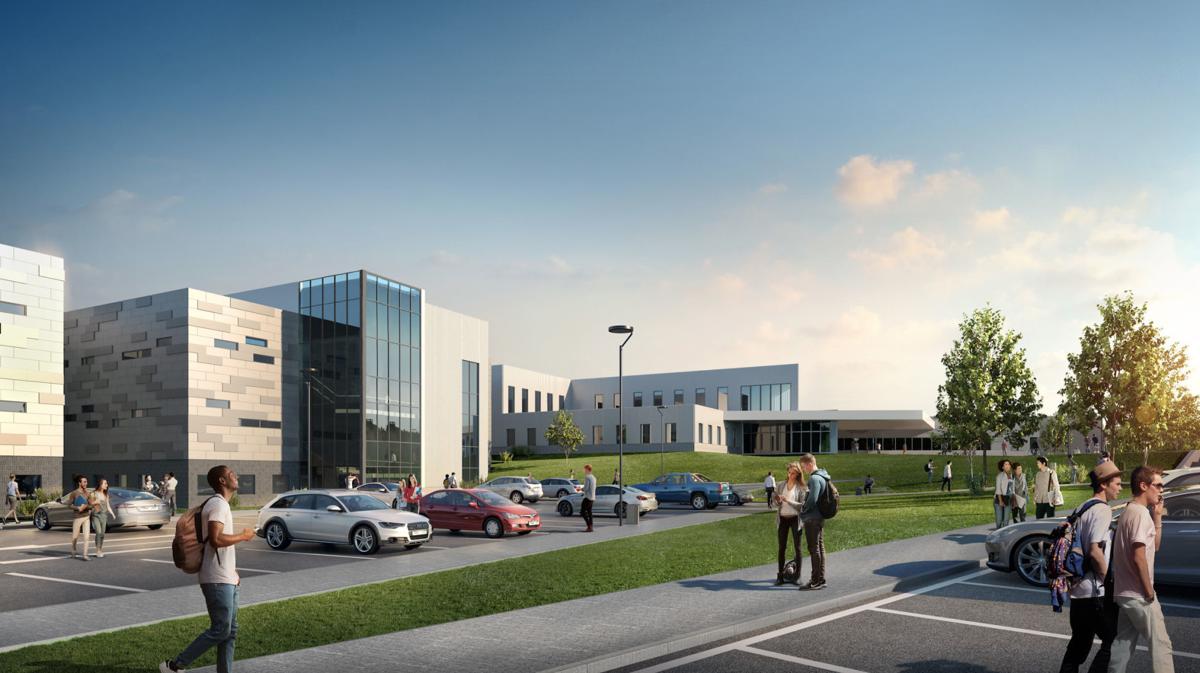 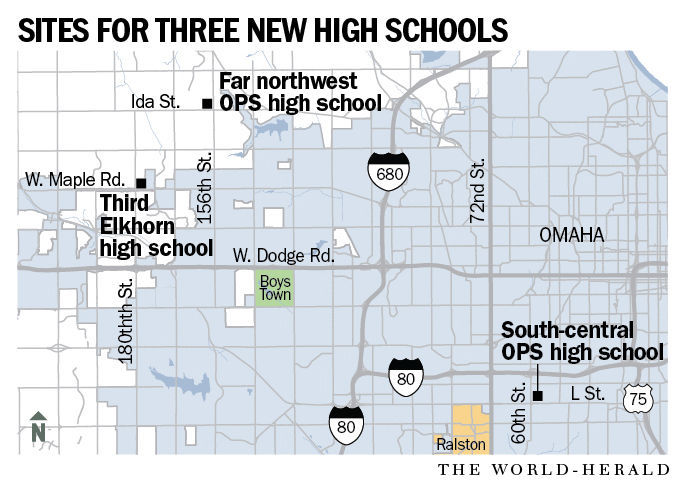 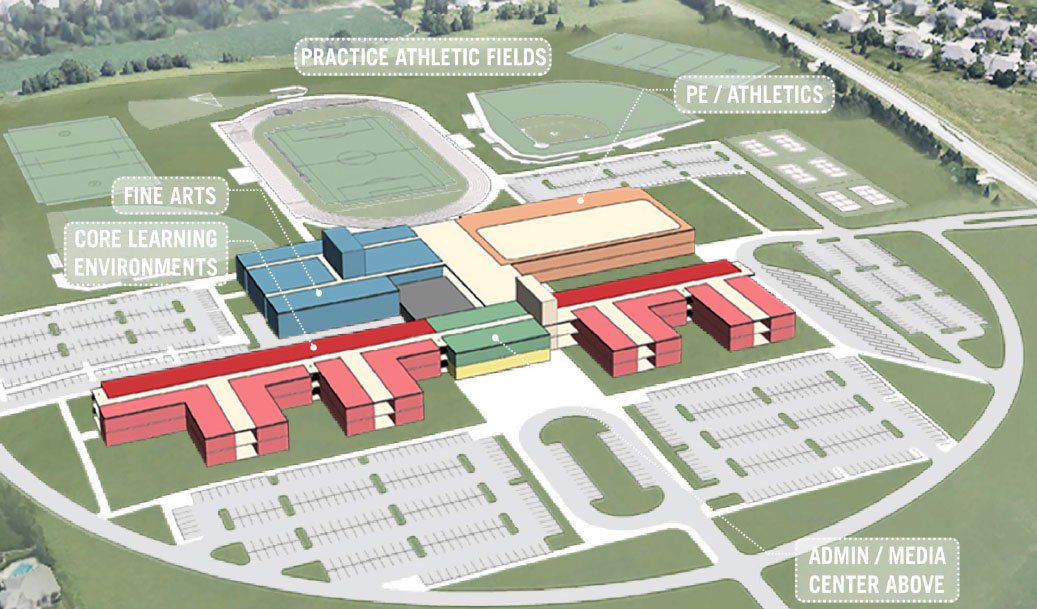 The proposed site of the new OPS high school at 156th and Ida Streets. 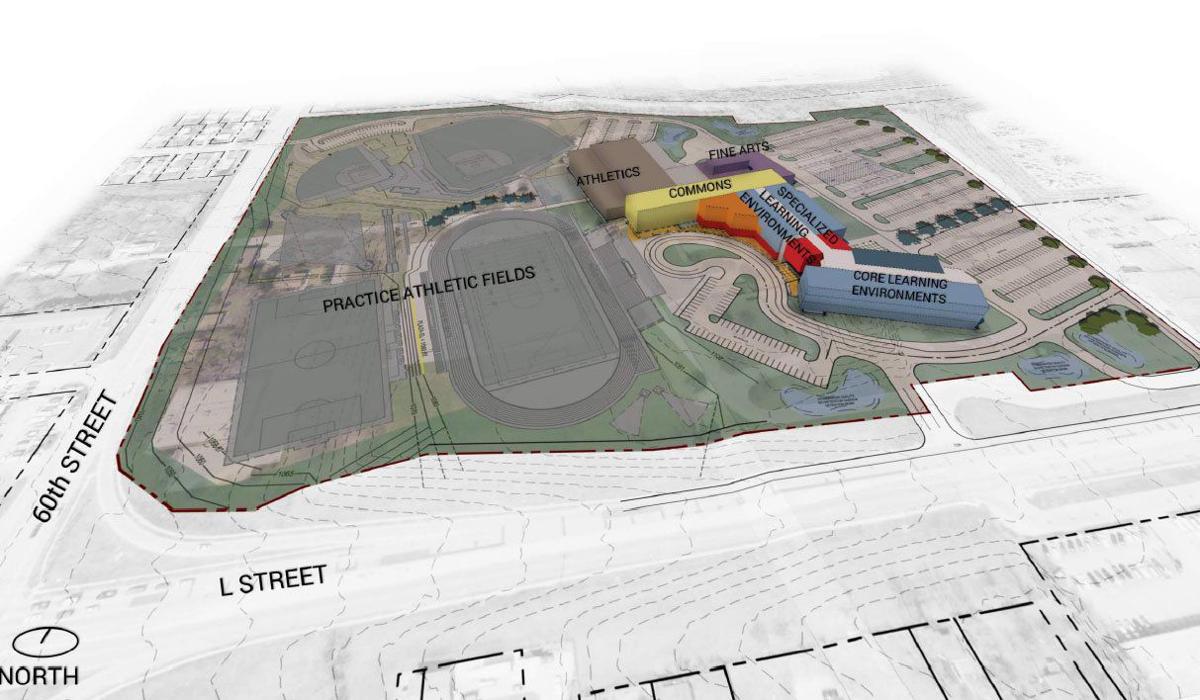 The proposed site of a new OPS high school at 60th and L Streets. 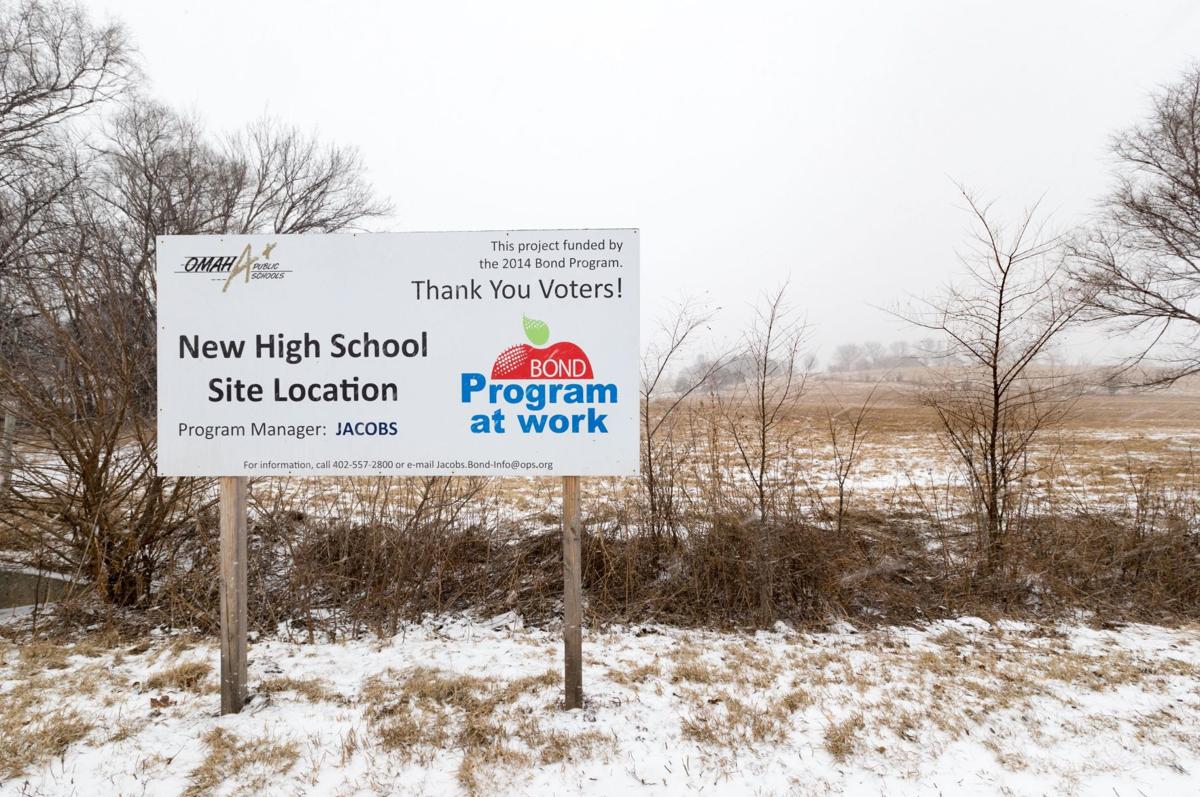 One new OPS high school will be built in this field at 156th and Ida Streets. The other will replace the former Ryan High campus.

The proposed site of the new OPS high school at 156th and Ida Streets.

The proposed site of a new OPS high school at 60th and L Streets.

One new OPS high school will be built in this field at 156th and Ida Streets. The other will replace the former Ryan High campus.

Blueprints are starting to take shape for the three new high schools that will be built in the Omaha and Elkhorn school districts over the next five years after the passage of recent bond issues.

Designers of the new high schools want to accommodate shifting trends in education, while keeping the buildings flexible enough to adapt to future needs.

Elkhorn plans to break ground next month on its third high school, dubbed Elkhorn North. The school, at 180th Street and West Maple Road, is scheduled to open in August 2020.

Elkhorn has had some recent practice at this — Elkhorn South High opened in 2010. The design for Elkhorn North is pretty much wrapped up.

But OPS hasn’t opened a new high school since the early 1970s, when classrooms still featured slate chalkboards and overhead projectors. Architects have worked on basic conceptual designs for the schools, but more concrete renderings will emerge after further meetings with architects, school staff, parents and students.

“Schools aren’t built every day,” said Vanessa Schutte, a K-12 education leader with architecture firm DLR Group. “It kind of becomes the icon of the community.”

A pool at OPS headquarters

OPS officials said the two high schools will look different but will be roughly the same size and offer much of the same curriculum — equity between the two schools is important to parents and community members.

New high schools today are being built to address modern issues in education, like shifting trends in technology that have rendered traditional computer labs passé and concerns over school shootings that have parents, students and staff clamoring for secured entrances and fortified classrooms.

But these buildings also have to last 50 or 75 years into the future and be flexible enough to evolve with new technology and teaching methods. Remember the open-concept trend in schools from the 1960s and ‘70s? Those noisy pod classrooms quickly fell out of favor.

So what does a 21st century high school look like?

We're in your neighborhood

Our reporters are always nearby to cover what you care about. For more stories like this, subscribe now for just $9.95 a month.

Elkhorn’s third high school will have plenty of similarities to Elkhorn South — the fast-growing district builds lots of new schools and doesn’t try to reinvent the wheel when it comes to school design.

But when talking to students and staff, school leaders and architects found a few things that could be tweaked, said Ryan Lindquist, Elkhorn’s executive director of business support services.

The school will have a three-story classroom wing, and science classrooms and labs will be clustered together at one end of the building, with room to add labs if and when the schools needs an addition. (There’s space to add an addition for 500 more students.) Nationally, upward of 70 percent of high schoolers take a science class all four years. In Elkhorn, that percentage is roughly 95 percent, so the district wanted plenty of top-notch lab space.

The OPS schools each will have eight multipurpose science classrooms, plus extra space for storage and prep.

Flexibility and collaboration are big buzzwords right now in education.

Schools are increasingly being designed with “flex” or breakout spaces that can serve multiple functions — nooks in hallways that small groups of students can study in or small rooms that can be used for a staff meeting or a student who needs to be pulled out of class for extra reading help.

For the OPS high schools, there have been talks about rooms with movable walls that can open up into larger labs, said Mark Sommer, the program manager for Jacobs Project Management Co., the firm overseeing OPS’s 2014 bond program. Other ideas include light furniture that can be moved around easily and infrastructure that lets teachers move around the room with technology, instead of being tied to a projector or whiteboard at the front of a room.

“(A teacher) may transform his or her classroom to accommodate a long-term documentary project, a civil war re-enactment, and six midterm presentations all before lunch,” a design report for the 156th and Ida school states. “School facilities should be designed with a quick-response ability: to flex and morph nearly instantaneously as the learning needs dictate.”

Freshmen worried about getting stuffed into a locker may be able to breathe a little easier — some schools are scaling back.

Elkhorn North, a 1,200-student capacity school, initially will be built with only 600 lockers, Lindquist said. The school will have extra space where more lockers could be installed, if demand is there, but the principals of Elkhorn and Elkhorn South High Schools said lots of lockers remain empty at their schools.

“Kids are hauling around stuff, carrying around backpacks with everything in them,” Lindquist said. “The high school principals said some kids, at the end of the school year when they go to clean out their lockers, they didn’t even know where it was.”

Lockers probably won’t go totally out of style, though. Nick Schulz, an architect with RDG Planning and Design, pointed out that in states like Nebraska with harsh winters, students still need somewhere to stash bulky winter coats or gym clothes.

In OPS, Sommer said, there have been conversations about student storage, but the issue isn’t settled yet.

“That concept of having a locker count that more matches use versus student count is a concept that needs to be fleshed out,” he said.

School safety, no surprise, is a big topic of conversation among architects and school staff. Video intercoms and swipe-card access systems have become the norm at school entrances, and many are designed with a T- or L-shaped entrance that funnels parents or visitors through a glass-walled front office before they can gain access to the rest of the school.

Hedges, bushy trees or landscaping that can block a school’s line of sight or allow a potential threat to hide are no-nos, said Lana Bayless, a civil engineer with DLR. But many principals and teachers still want big windows that let in natural light and schools that feel open and inviting.

“It’s a challenge to be open, have open spaces and a sense of welcoming, but at the same time, the community feels when they send their kids to school, they’re in a safe place,” said Cesar Garcia, a DLR structural engineer.

At Elkhorn North, the principal, school resource officer and other administrators will have a clear view out to the parking lot, and a glass vestibule will steer all visitors into the office first.

Because so many students have their own devices, or teachers pass out laptops and tablets from mobile carts, newer schools are overhauling their traditional computer labs and library/media centers, Schulz said.

When Elkhorn High was remodeled a few years ago, the district converted several computer labs into classrooms, Lindquist said. “Nobody was using them.”

In the media center, Elkhorn North will have a tech help counter where kids can bring their Chromebooks for help or repairs.

“With the one-to-one trend, we’re seeing less books being actually checked out within a library,” Schutte said.

That doesn’t mean no one’s reading. But more students may be opting for e-books, or schools might edit their inventory. DLR recently worked on the “de-booking” of a media center. The school removed 50 to 75 percent of its books, Schutte said, keeping leisure books but chucking bulky encyclopedias.

Schulz said media centers may transition from quiet study centers to hubs that are more communal, with breakout rooms where students or community groups can meet, or “maker-space” areas where kids can use 3D printers or program robots.

OPS doesn’t have a widespread one-to-one initiative yet, but Sommer said classrooms and spaces in the new schools will include infrastructure that can one day support students who all have laptops or tablets.

Some high school fixtures won’t change much. Most high schools, even smaller ones, still have two gyms, one for practice and one for competition, and the OPS and Elkhorn high schools will be no different.

The new OPS high schools will have a track and practice fields, but it hasn’t been decided whether stadiums will be built at each school, or if teams will share the stadiums at other OPS schools, like Burke or South. Bayless said the community around the 60th and L school has expressed an interest in soccer fields that can be used by both school and community teams.

The 156th and Ida school will have a joint YMCA facility with a six-lane indoor pool, a fitness center and other amenities that students and community members can share.

Cafeteria and auditorium spaces haven’t changed much, although some schools in other regions are switching to more of a food court vibe or dining halls with different food stations.

Tuition, fees, and room and board are set and, not surprisingly, students and parents will require more money than they needed last year. Tuition in most cases will go up 3.2 percent. But NU has said that if its state money is diminished in midyear, NU President Hank Bounds would jack up tuition further for second semester.

Will any of the new high schools utilize plans of an existing high school or did the boards pay someone for an entirely new design? If a new design, why? Isn't that a waste?