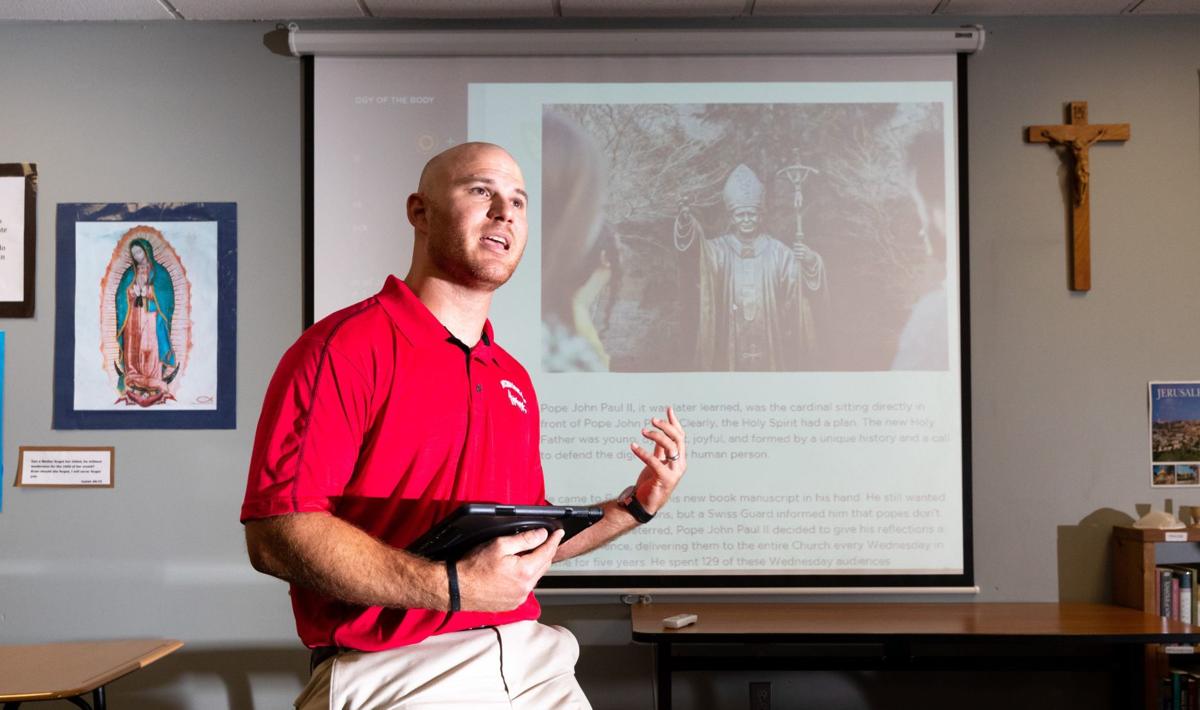 With a projection of Pope John Paul II on the screen behind, Skutt Catholic theology teacher Bart Zavaletta talks about the school’s adoption of the new sexuality education curriculum recommended by the archbishop. 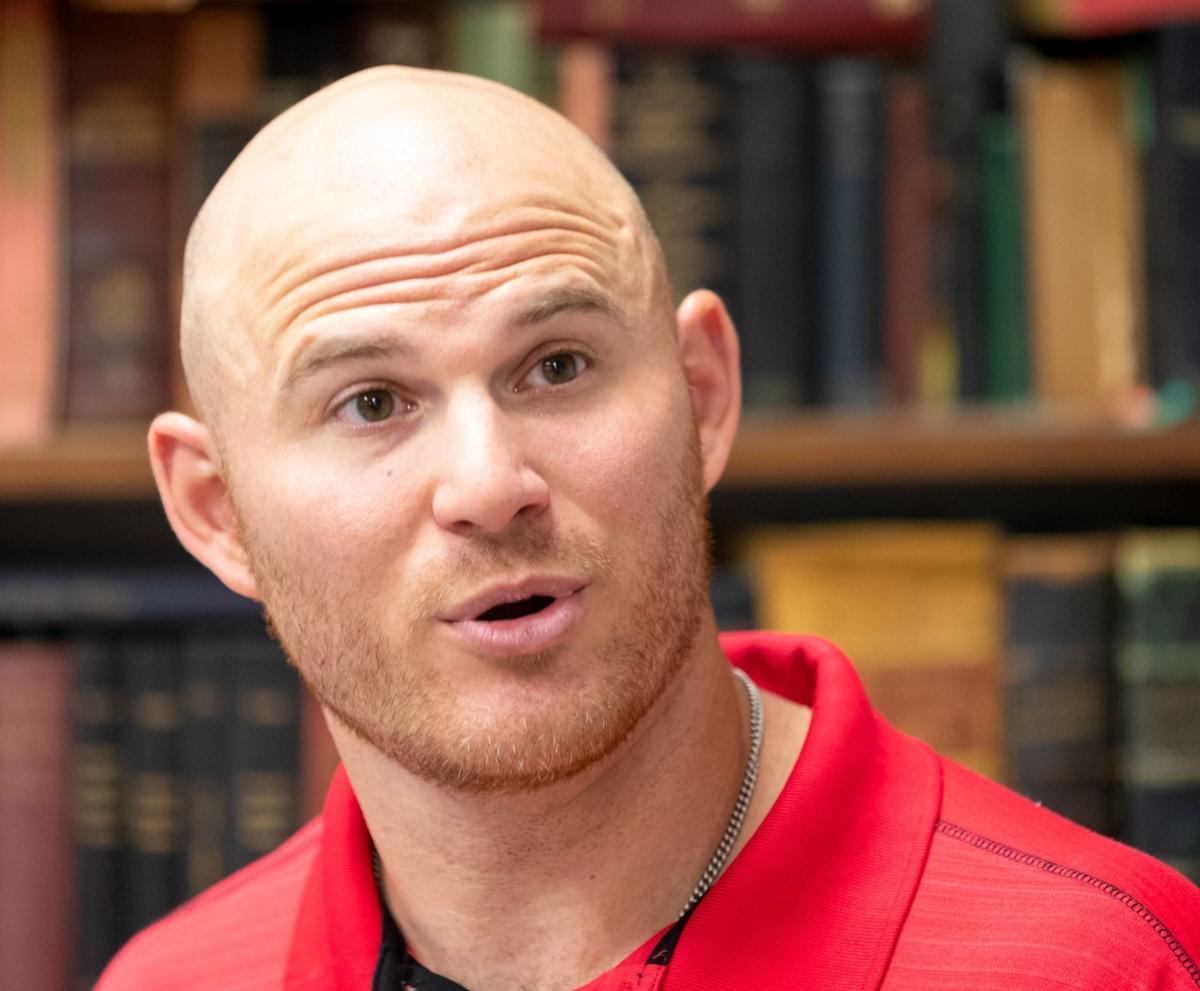 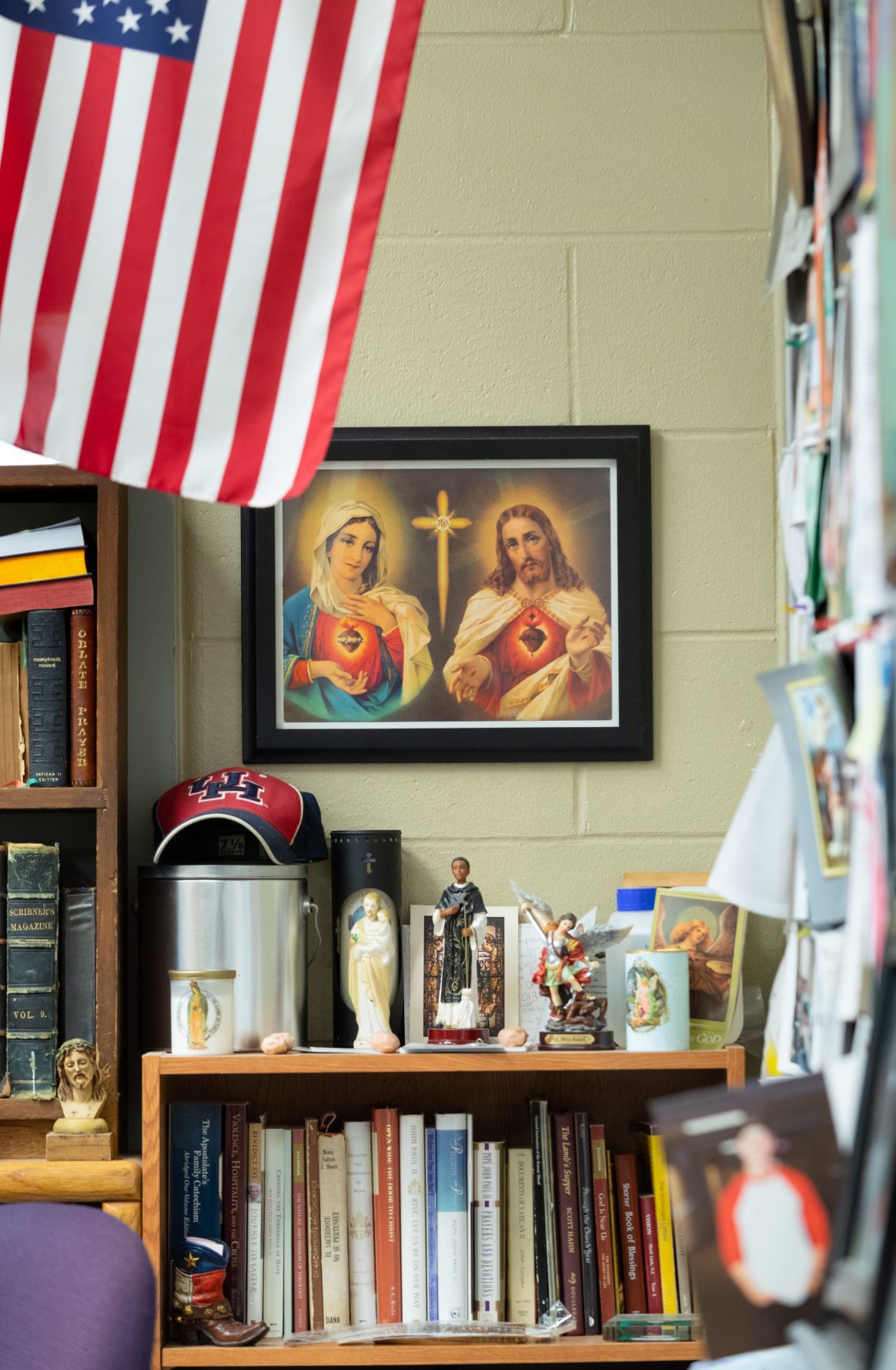 The area behind Skutt Catholic theology teacher Bart Zavaletta’s desk is a mix of religion, personal items and the U.S. flag. 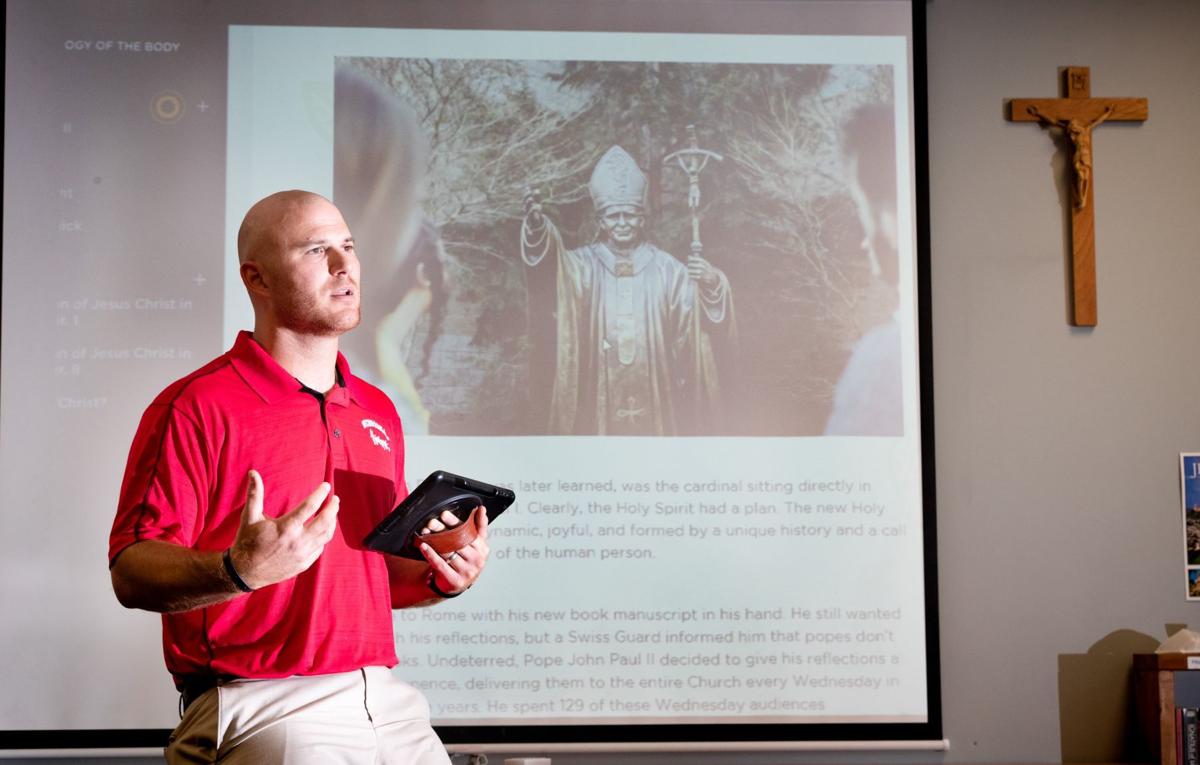 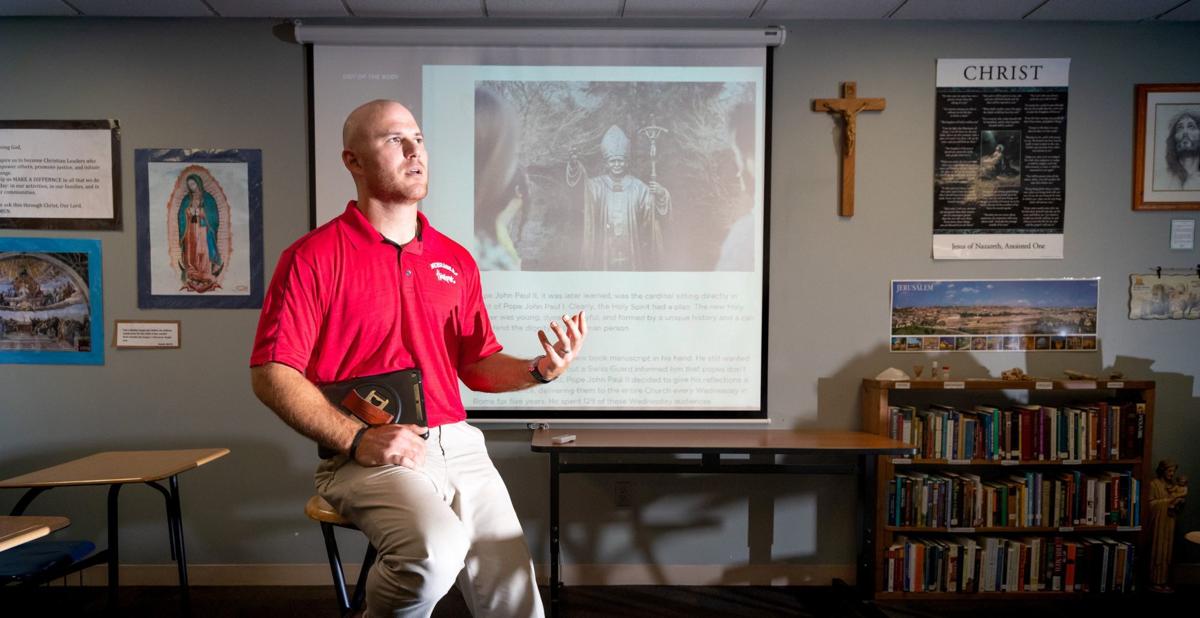 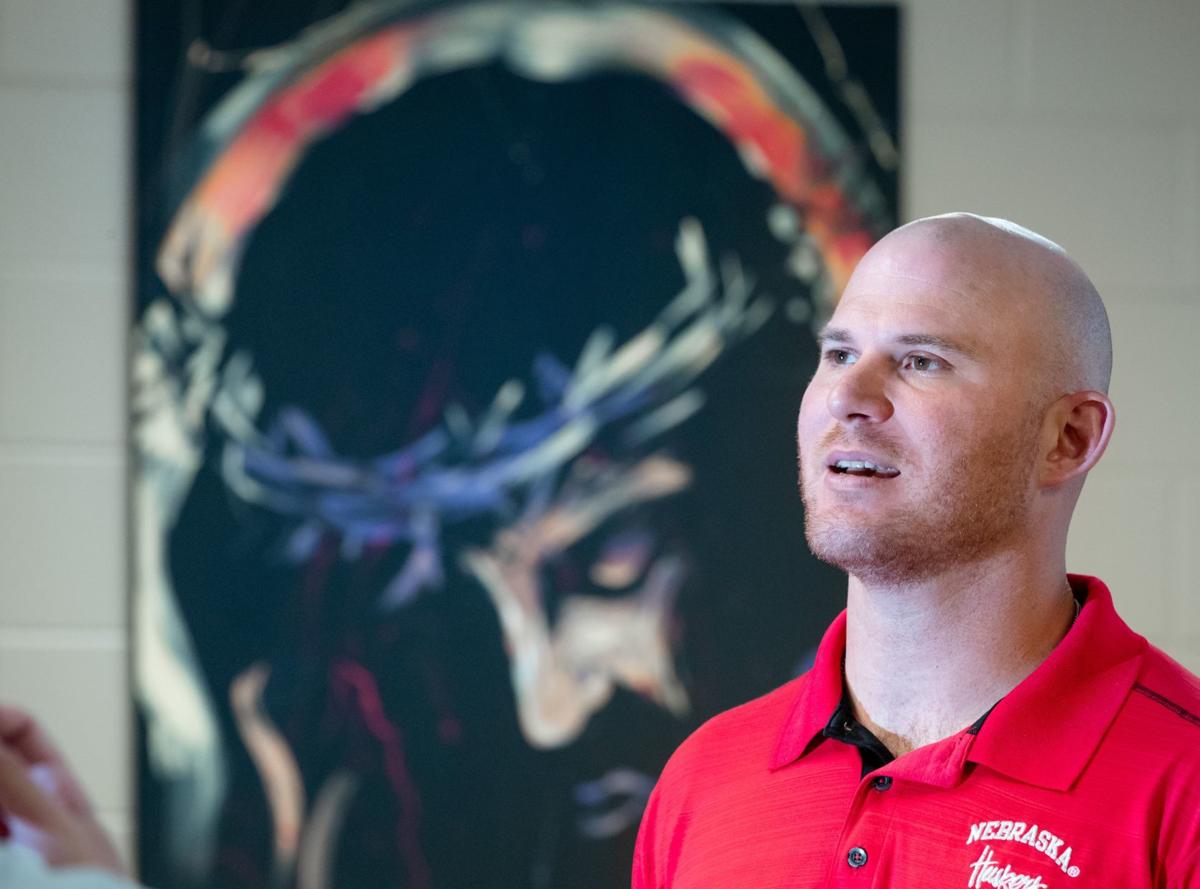 With a projection of Pope John Paul II on the screen behind, Skutt Catholic theology teacher Bart Zavaletta talks about the school’s adoption of the new sexuality education curriculum recommended by the archbishop.

The area behind Skutt Catholic theology teacher Bart Zavaletta’s desk is a mix of religion, personal items and the U.S. flag.

The archbishop of Omaha has endorsed a new human sexuality curriculum for Catholic school students that deals head-on with the divisive issues of homosexuality, same-sex marriage and gender identity.

The curriculum, created by a Catholic organization in Cincinnati, affirms traditional church teaching.

It champions traditional marriage as the union of a man and woman while opposing homosexuality, same-sex marriage and sex outside marriage.

Though such topics have been covered in Archdiocese Catholic schools in the past, the new curriculum rolling out in some schools this fall is believed to be the world’s first K-12 curriculum based on the sexuality teachings of St. John Paul II.

The archdiocese encompasses 23 northeast Nebraska counties, including Douglas, Sarpy and Washington Counties. It stretches as far west as Stuart, Nebraska, about 200 miles northwest of Omaha. The 70 archdiocesan schools enroll about 19,800 students.

The curriculum, “Rooted: Theology of the Body,” was selected by an archdiocesan committee. Archbishop George J. Lucas is “strongly recommending” its use, according to Deacon Tim McNeil, chancellor of the archdiocese.

The recommendation for the new curriculum comes on the heels of two large Nebraska public school districts updating their sex-education instruction.

Last spring, the Millard school board approved a new curriculum that continued the district’s emphasis on abstinence. It addresses a host of topics including sexting, pregnancy, contraception, relationships and the biology of sex, but does not discuss sexual orientation and gender identity. Those issues are left to parents.

In 2016, after a contentious series of public meetings, the Omaha Public Schools board approved a comprehensive new curriculum that includes teaching about sexual orientation and gender identity. The OPS curriculum, which promotes abstinence but also includes a condom demonstration, teaches that sexual orientation is a part of one’s personality and unchangeable. It says transgender people can have any orientation, rejects the view that relationships must be “binary” — as between a man and a woman — and calls on students to accept other people’s decisions on sexuality.

The Catholic schools’ Rooted curriculum is meant to supplement existing courses in religion, health and biology. It’s presented in an easily digestible form that makes use of children’s literature, Scripture, testimonials and videos from popular culture. For example, one video clip is the viral audition video from the “Britain’s Got Talent” TV show featuring a frumpy Susan Boyle wowing a skeptical crowd with her singing.

It emphasizes that all persons deserve to be treated with dignity, stating that students must have “deep compassion for those confused about their own maleness or femaleness.” It cautions against mistreating or condemning people attracted to someone of the same sex.

“The church does not condemn those with same-sex attraction to a life of misery,” it says, “she welcomes and invites all people, regardless of who they are sexually attracted to, to follow Christ’s radical call to take up our cross and follow Him.”

The high school lessons, titled “Called to Be More,” address gender identity, stating that while some people “legitimately struggle with their gender identity,” gender is a “given reality,” not a choice.

People’s feelings “don’t change the reality that there are two ways of being human — male and female,” the high school curriculum says.

The curriculum states, however, that “due to rare biological problems in conception and development, there are people whose body has not fully differentiated in the normal way into male or female.”

Those people must be accepted and loved, “but we cannot compromise the truth that God created us male or female,” it says.

As pope, John Paul II delivered a series of lectures in Rome from 1979 to 1984 called “The Theology of the Body” that expounded on love, marriage and human sexuality.

The three women who wrote the curriculum are all graduates of the Pontifical Pope John Paul II Institute for Studies on Marriage and Family at the Catholic University of America.

“This is a curriculum on the human person,” said Steve Deiters, curriculum director at Ruah Woods, the Cincinnati apostolate that created it. “It answers the bigger questions. Sex is one tiny aspect of what drives humanity but there is so much more. It’s really about the dignity of the human person, and how we are called by God, we’re made in God’s image and likeness as male and female.”

During the 2016-17 school year, the Archdiocese of Cincinnati piloted Rooted in more than 1,100 schools and parishes.

On Feb. 14 this year, the Cincinnati archbishop recommended its use for kindergarten through eighth grade. He is expected to do the same with the high school curriculum, Deiters said.

In 2016, the Omaha archbishop tasked a committee to research and recommend a human sexuality curriculum for use in Catholic schools and also to find resources to help parents and parishes teach children about sexuality.

Although Archbishop Lucas has authority to mandate use of the curriculum, in this case he “strongly recommends” its use, according to Chancellor McNeil. The archbishop declined The World-Herald’s request for an interview.

McNeil said it is rare that the archdiocese would mandate curriculum and resources. It has been done before, however, when the archdiocese implemented the Circle of Grace child protection policy, procedures and training, he said.

The Rooted curriculum received an imprimatur, which is authorization from the Catholic Church that its contents reflect Catholic teaching.

Rooted is believed to be the world’s first K-12 curriculum based on the Theology of the Body, according to Kathie McGee, a Skutt Catholic High School theology teacher who chaired the committee.

“It’s the first ever, not just in the U.S., so we’re pretty excited to be adopting and piloting it,” McGee said.

McGee said Rooted is not necessarily meant to replace curriculum in use at Catholic schools and parishes. They have been using some good human sexuality curriculum materials and will continue to use some of those, she said. A key strength of Rooted is that it covers kindergarten through high school, with younger grades foundational for later ones, she said.

Skutt will teach the curriculum in ninth through 11th grades this year. Other archdiocese schools are adopting or piloting it.

“It’s awesome,” said Tammie Romberg, who will pilot the curriculum in her fourth-grade classroom at St. Bonaventure Catholic School in Columbus, Nebraska.

Starting in the youngest grades, kids will learn to recognize the dignity of themselves and others, Romberg said.

“By the time that they get to middle school, hopefully, they’re already saying, ‘My body is sacred, I’m not going to do anything with it that’s not moral.’ It teaches purity,” she said.

While holding fast to traditional church views, the curriculum addresses misconceptions about the church’s positions and responds to common criticisms, including that the church judges too harshly those who violate its teachings.

For instance, the curriculum tells students the Catholic Church “does not teach that those with a same-sex attraction are lesser people, are evil or are going to hell.”

Magan Smith of Omaha has two kids in Catholic school but disagrees with the church’s position on homosexuality.

Smith describes herself as a “cultural Catholic not a religious Catholic.”

Her 12-year-old twins, Camille and Finnian, are going into seventh grade at St. Cecilia Cathedral School.

She said she values her Catholic upbringing and the education her children receive, but she disagrees with the church’s teaching on homosexuality.

She said the church’s teachings provide a foundation by which to springboard the conversation with her children.

“I challenge my kids to think for themselves and to find the rationale in conjunction with their faith,” she said. “And then when they ask me my opinion, I give it to them. While I value the church’s teachings, I am in conflict with the church on the issue of homosexuality. I think that it is clear that the church is in conflict with itself on this issue.”

At her husband’s urging, she said, she has remained in the church to be the change from within.

Smith said the church’s use of this sex education curriculum would not keep her from putting her kids in Catholic school.

“Catholic schools have so much to offer,” she said. “I went to public school as a student, as well, and no school system is without difficulty or conflict. At the end of the day, everything is up for discussion in our household, and the Catholic church’s teachings are a part of those conversations.”

Bart Zavaletta, 36, theology teacher at Skutt Catholic, will teach Rooted as a supplement to the regular theology curriculum.

Today’s students want something deeper than just a recitation of Church rules, and the curriculum delivers, he said.

The curriculum provides that theological basis, better arming teachers to respond to questions from students and critics, he said. Some kids enroll at Skutt after attending public elementary and middle schools, where they’ve been taught with a public school curriculum, he said. So they’ve been exposed to a secular view of sexuality, and they come in with a lot of questions, he said.

He said people can get turned off by the church’s theological language, which can come across as harsh. Teachers must serve as “witnesses to the truth” and delicately approach controversial topics with sincerity, compassion and love, he said.

As Mark Evans prepares to pass the baton to incoming Superintendent Cheryl Logan, he sat down with The World-Herald to reflect on his time with OPS.

There is no need to teach about birth control in a church that apparently only sanctions and subsidizes sex between men and young boys.