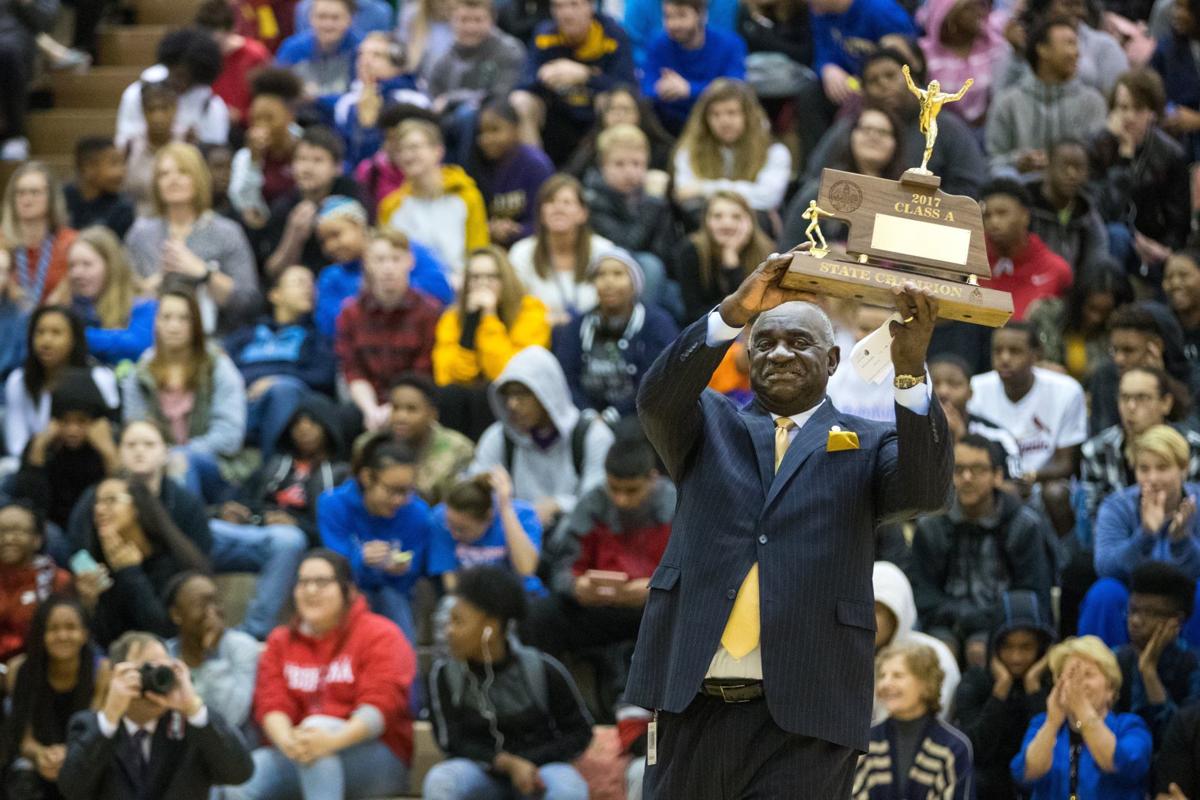 The 2017 Omaha North football team, the Class A state champions, presented Principal Gene Haynes with their trophy during a pep rally. “Mr. Haynes was the biggest, strongest, toughest guy in the building,” said Cliff Brunt, a 1992 North High grad. “And he was the biggest teddy bear in the building.” 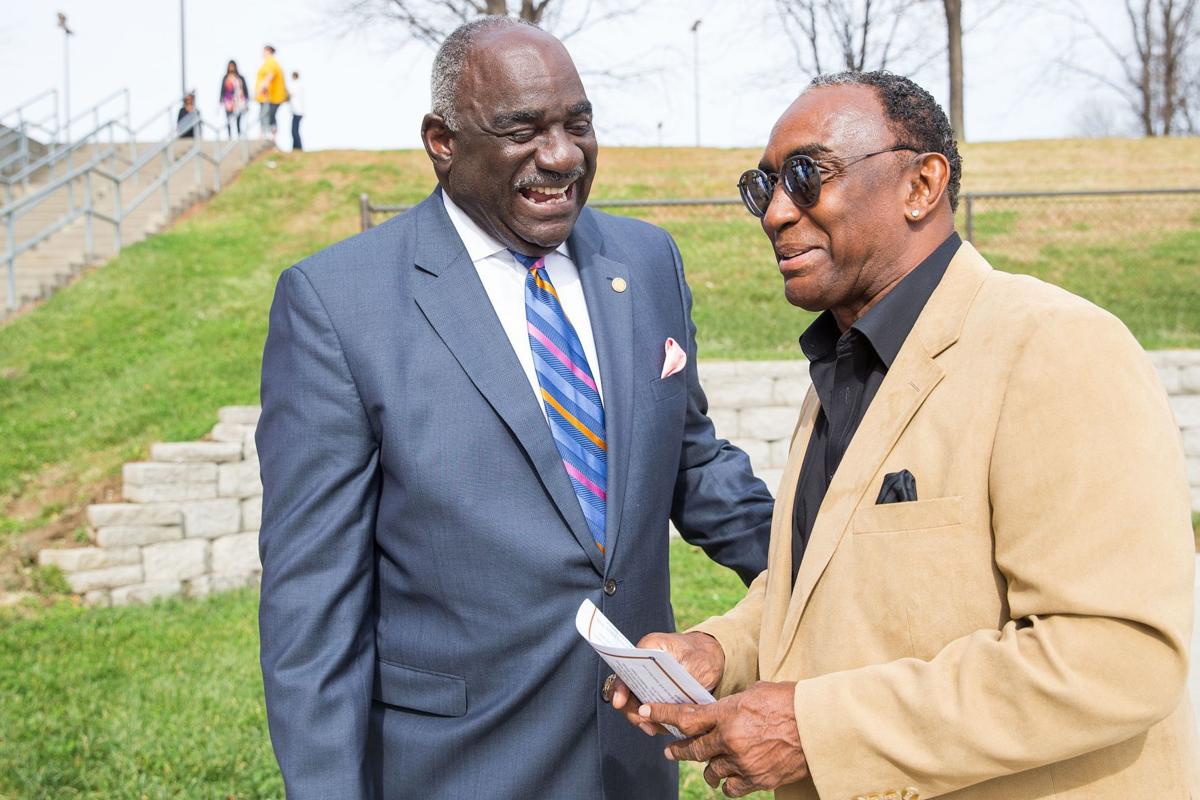 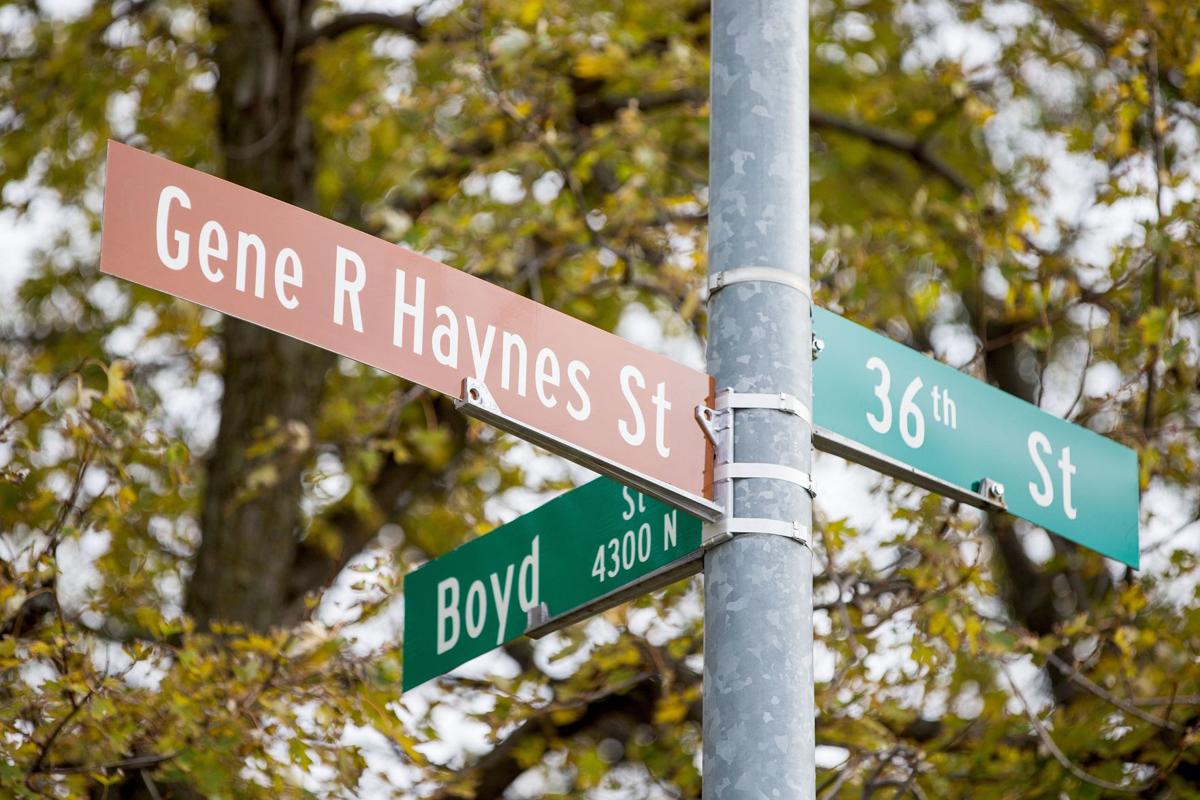 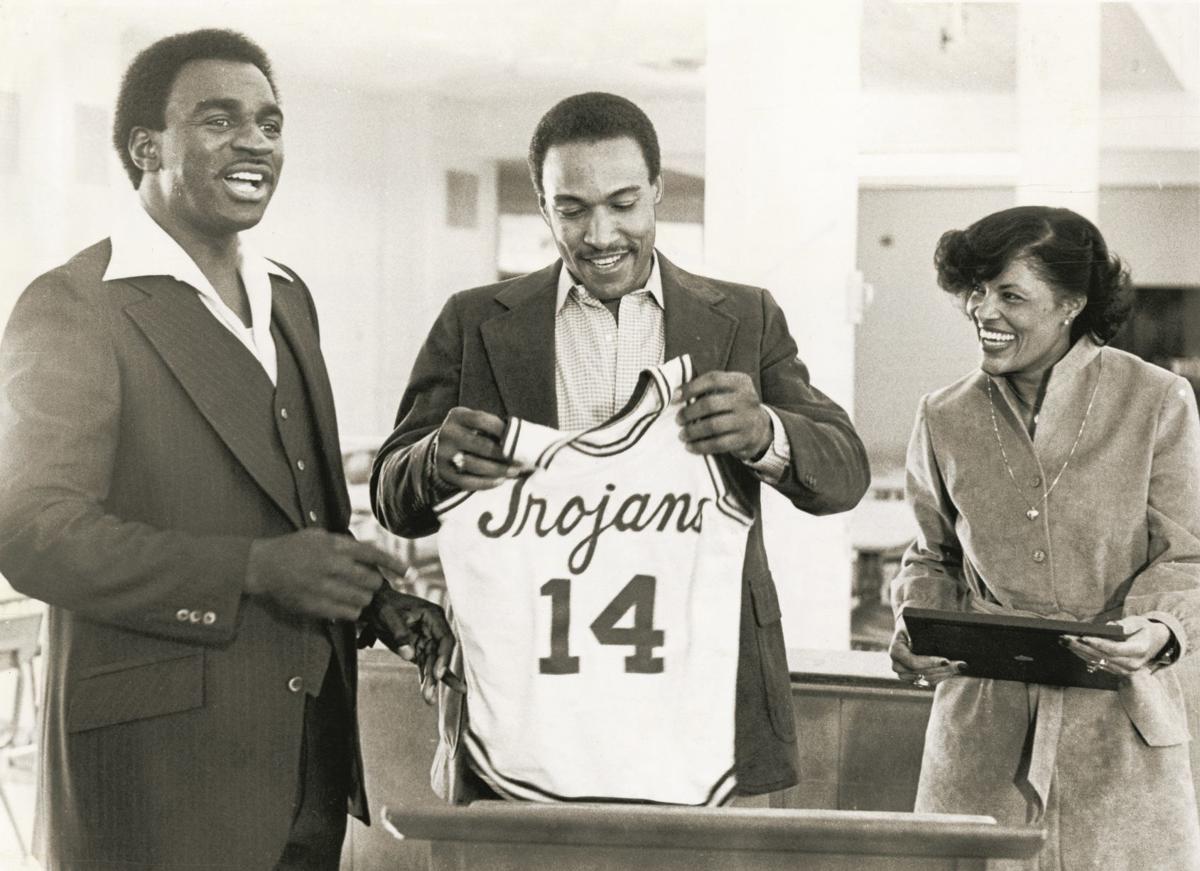 Principal Gene Haynes can be heard before he’s seen.

His voice echoes through the hallways of Omaha’s North High School as he encourages his students to hurry from one class to the next.

“Come on, little sister, don’t be late,” Haynes recently told a student taking baby steps. “Or your Saturday will be with me.”

Haynes shook a student’s hand. Patted another on the back.

Haynes pointed to a student — he taught the student’s mother, too.

Haynes is not an office person. He’s out with his students, calling everyone he sees “brother” or “sister.” Thousands of students have heard that greeting during Haynes’ nearly 53 years with the Omaha Public Schools.

He’s been a teacher, coach, athletic director and principal. The 75-year-old has been principal of North since 2001.

But this school year will be the last for Haynes. He’s retiring at the end of the year.

His two grandchildren, ages 7 and 12, keep asking Haynes when he’s going to come visit them in California. And he wants to spend more time with his wife, Annie, who retired more than a decade ago.

His announcement has prompted an outpouring of support for a man many say can’t be replaced.

Brunt, a sportswriter for the Associated Press in Oklahoma, graduated from North in 1992. Haynes was the school’s athletic director then.

“Our young black men needed to see a man who could be strong physically but was comfortable enough in his own skin to have a softer side,” Brunt said.

Haynes challenges himself to learn the names of all of his students, which earns him the respect of the students, said Desyree McGhee, a senior at North.

“He knows them by name. He knows their story. He takes the time to actually get to know them,” she said.

Former OPS Superintendent Mark Evans once said that he considered himself to be a pretty good principal until he met Haynes.

“I knew every young person by name, and I had 1,600 students,” Evans said. “But (Haynes), he didn’t just know their names, he knew their aunt, uncle, grandma, everybody. He knows the families, he knows the community.”

North High is at 36th Street and Ames Avenue and is a magnet school for science, technology, engineering and mathematics education. More than 2,000 students were enrolled at the school this year.

Born in Mississippi, Haynes was the son of a sharecropper who had a sixth grade education. He attended segregated schools in the Jim Crow South. Haynes remembers getting a National Guard escort to school after James Meredith enrolled at Ole Miss.

Haynes followed his family to Omaha.

He began teaching social studies at Tech High in 1967 and coached the school’s basketball team for 13 years. He was the first African American head basketball coach in OPS.

Tom Warren was one of his basketball players at Tech High.

Warren is president and chief executive officer of the Urban League of Nebraska. He had a 24-year career with the Omaha Police Department, including four years as police chief. He was Omaha’s first black police chief.

Warren said Haynes was known as a strict disciplinarian, but he was more about character development and having his players reach their full potential.

“Gene had the unique ability to get to know the students,” Warren said. “You knew you were interacting with someone who really cared about your well-being.”

Haynes drove Warren and another student in his personal vehicle to college recruiting trips to make sure they had access to those opportunities.

“He knew education is the equalizer in our society,” Warren said.

The tour ended in Haynes’ office.

“Within 30 seconds, Haynes was talking to my husband about Indiana basketball and totally won us over,” High said.

High’s son, Henry, is a junior at the school. She said Haynes has a vision for North and as a result people want to be part of the school.

Haynes has been known to meet with parents in the evenings or on Saturday mornings because he doesn’t want to burden parents by making them miss work.

Haynes has a few more months to walk the halls of North High School. After that, he plans to continue to support the school and advise his unnamed successor as needed.

So after 53 years in education, how does Brother Haynes hope to be remembered?

“As someone that cared. And someone that really wished to provide the best opportunities for students to have success.”

Editorial: These local African American examples, past and present, inspire

It’s hard to exaggerate the importance that positive role models provide for young people. Gene Haynes, who has announced his retirement as pr…